…and here we go again another book review.

My game room is slowly turning into a book library, in less than a year my book collection has grown from just a few books to 30 something, every single of them being computer/console games oriented.

This particular trend is because of some very persuasive Kickstarter campaigns and good friends in the retro community.

The ARTCADE Kickstarter started back in September 2013 and the circle was finally closed 14th of April 2016 when the book got published.

The book consists of more than 300 pages of restored art from Arcade/*Coin-op machines, their marquees to be exact. 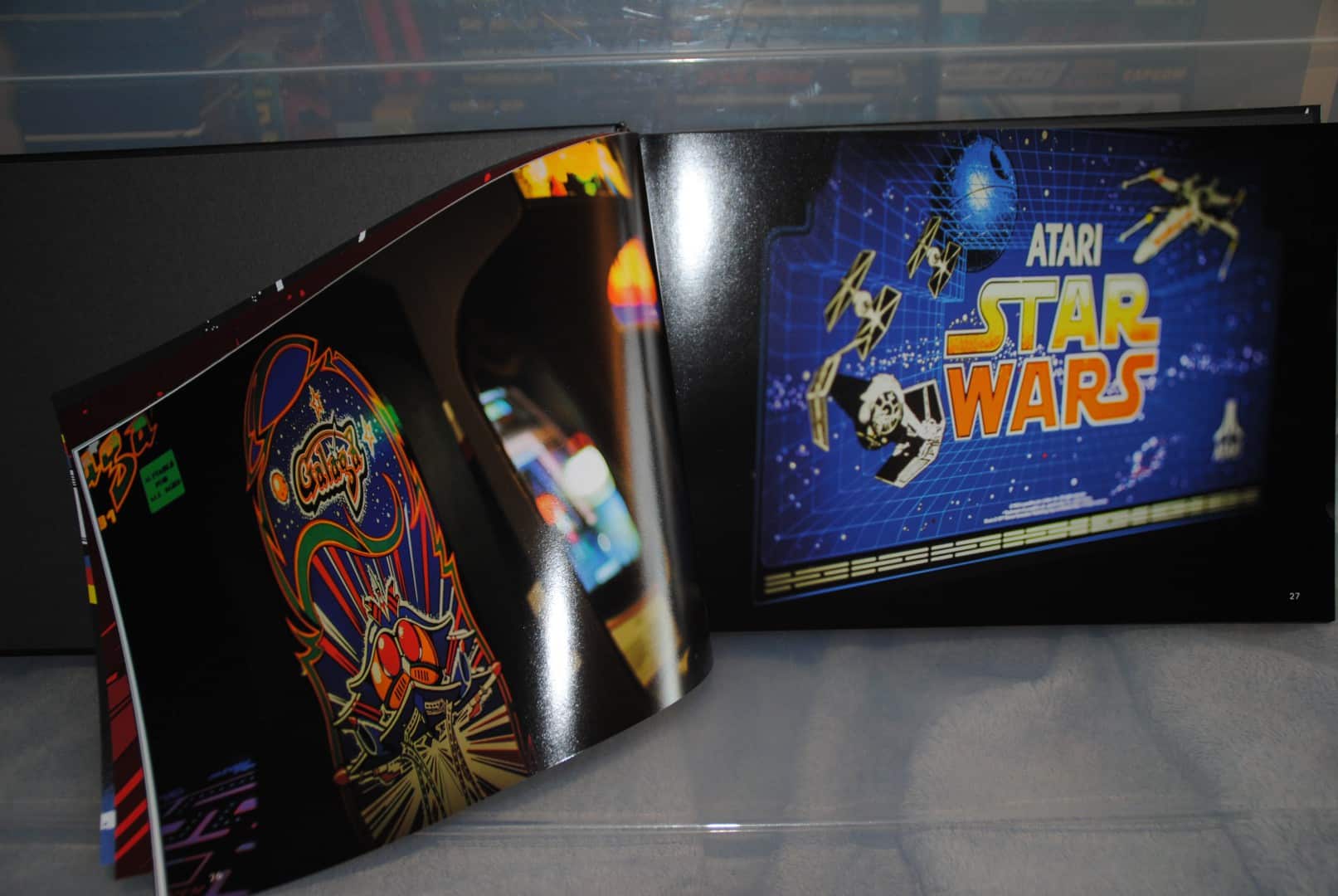 So what’s a marquee you say?

Wikipedia has this to say about it: 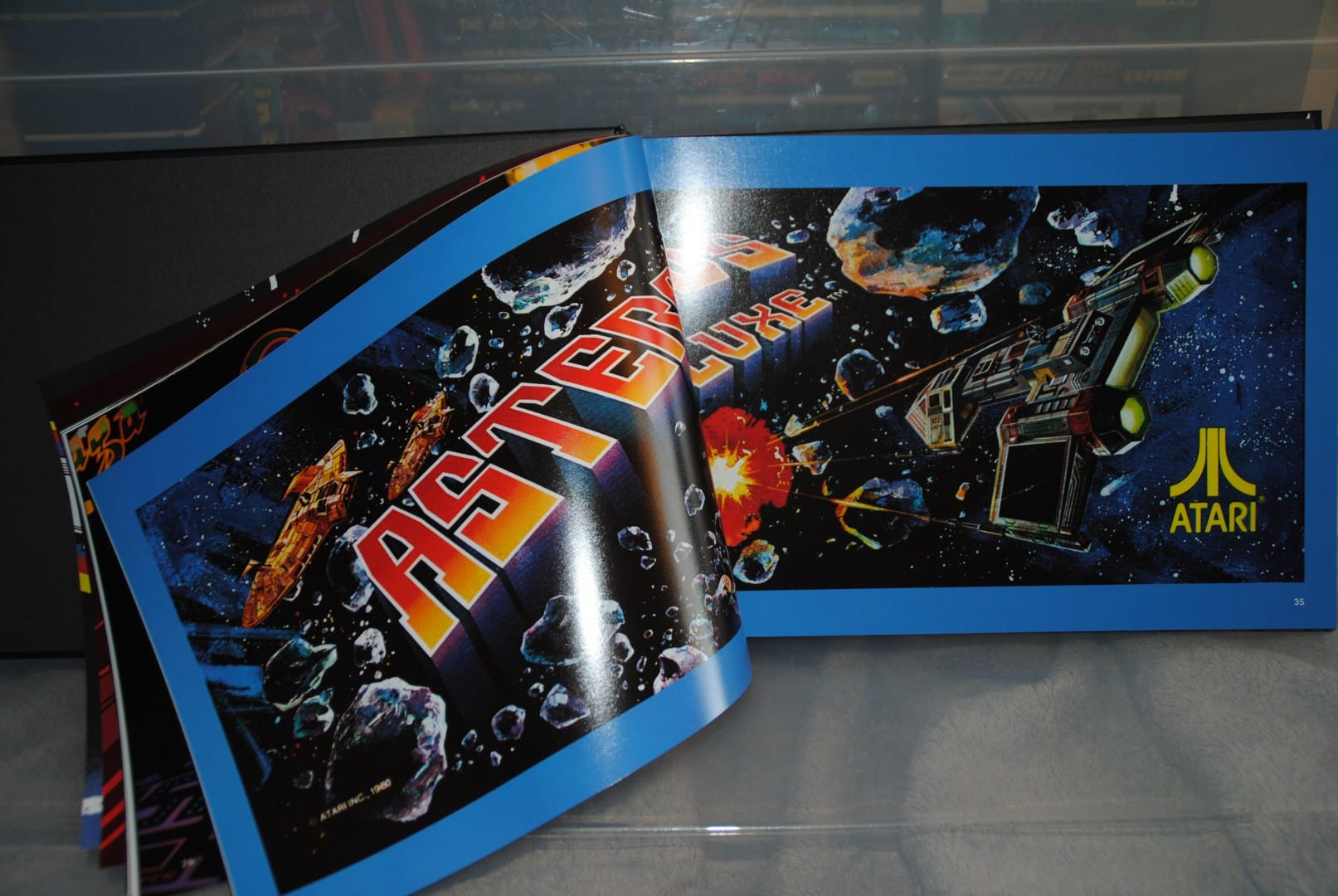 So to say it in a language we all understand, a marquee is the sign on top of the cabinet/coin-op machine. 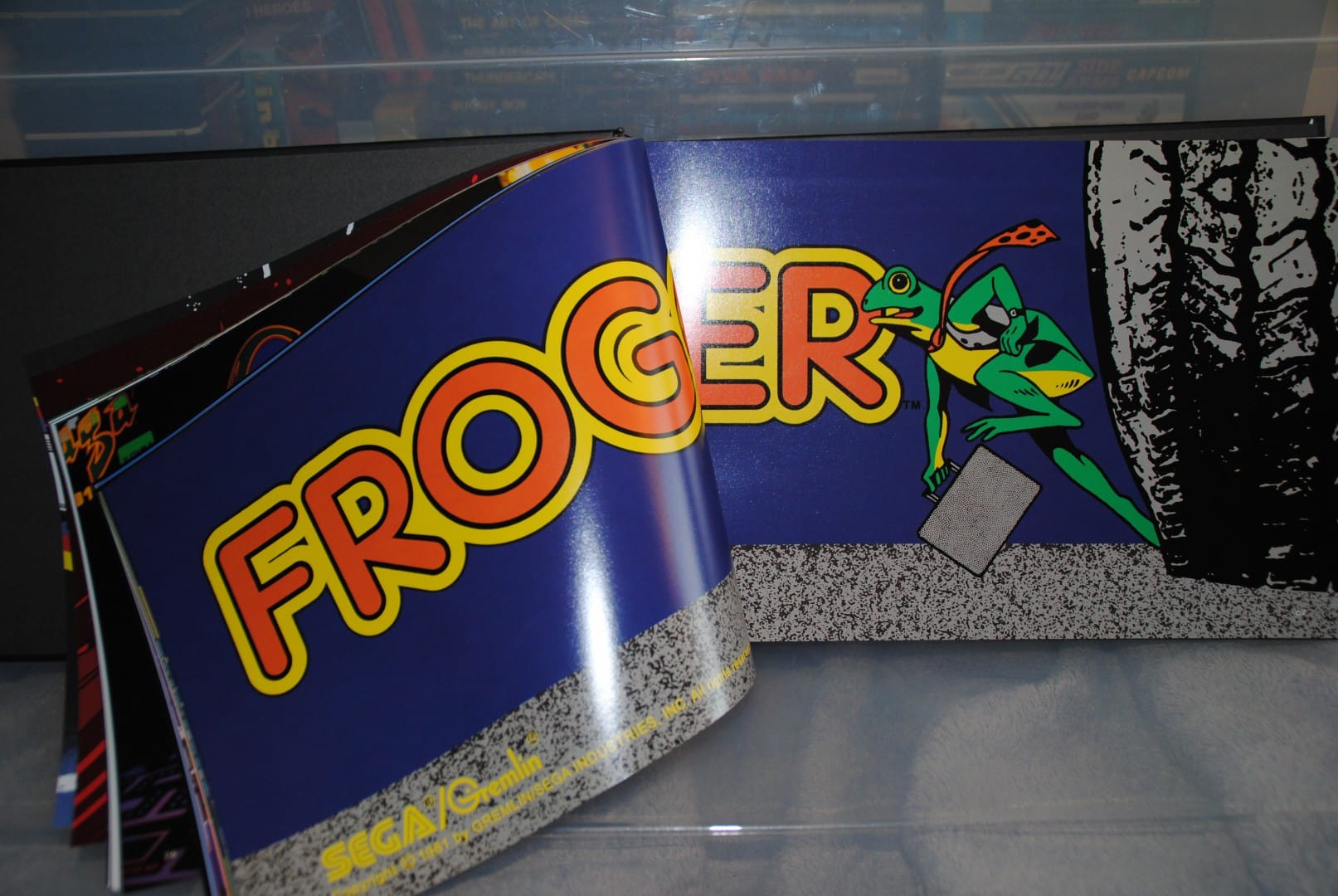 The story behind this project is actually quite interesting and one that i thoroughly respect, Tim Nicholls spent a lot of his money (including selling his arcade machine collection) to buy this collection from a Hollywood Props company that was going into liquidation.

The Hollywood company had stored all these signs over the years, all in their original state, many of them in pretty bad condition. 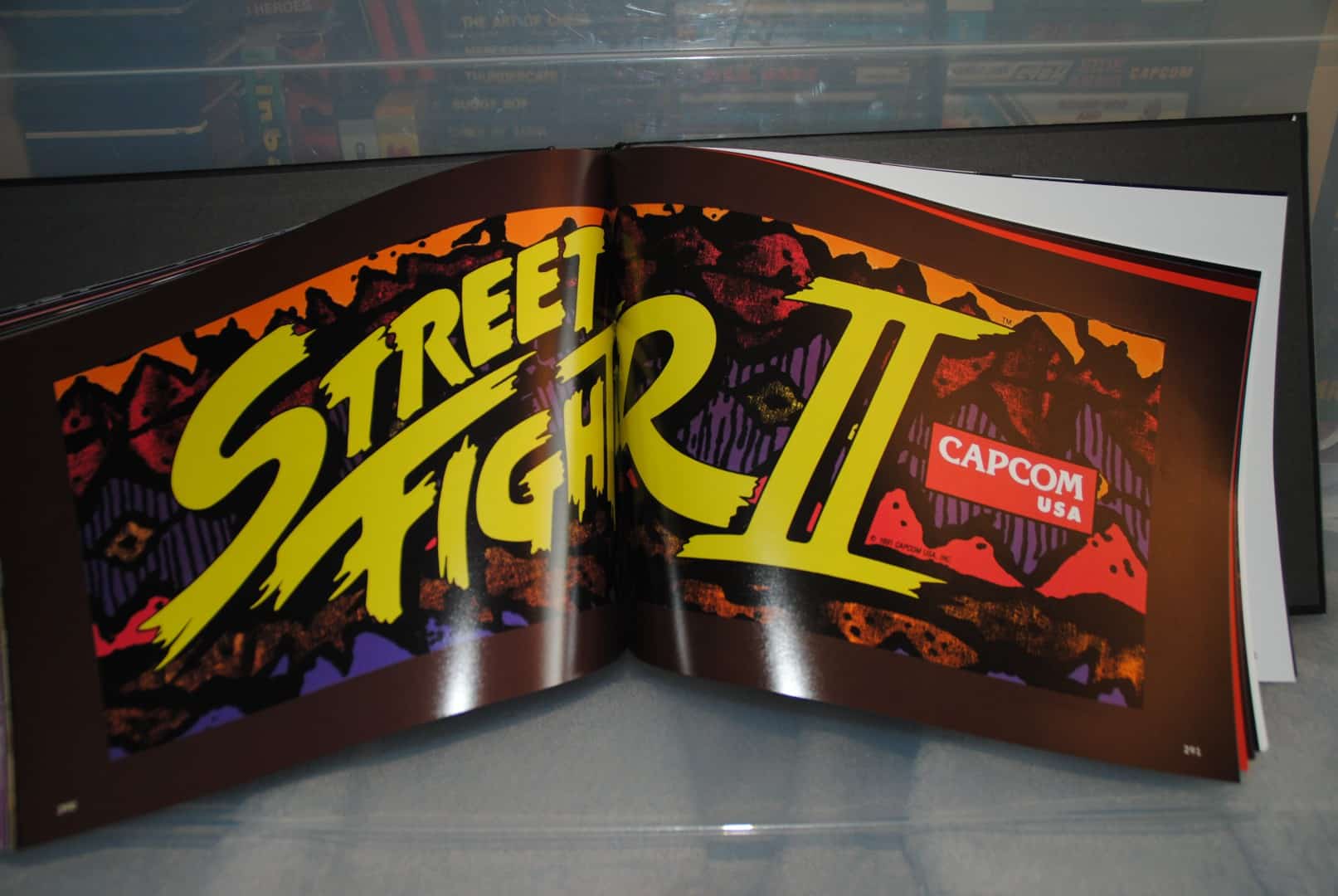 Tim had a goal and this was to try and restore all of them, after more than 2000 manhours the goal was reached, he then went on to produce the book. 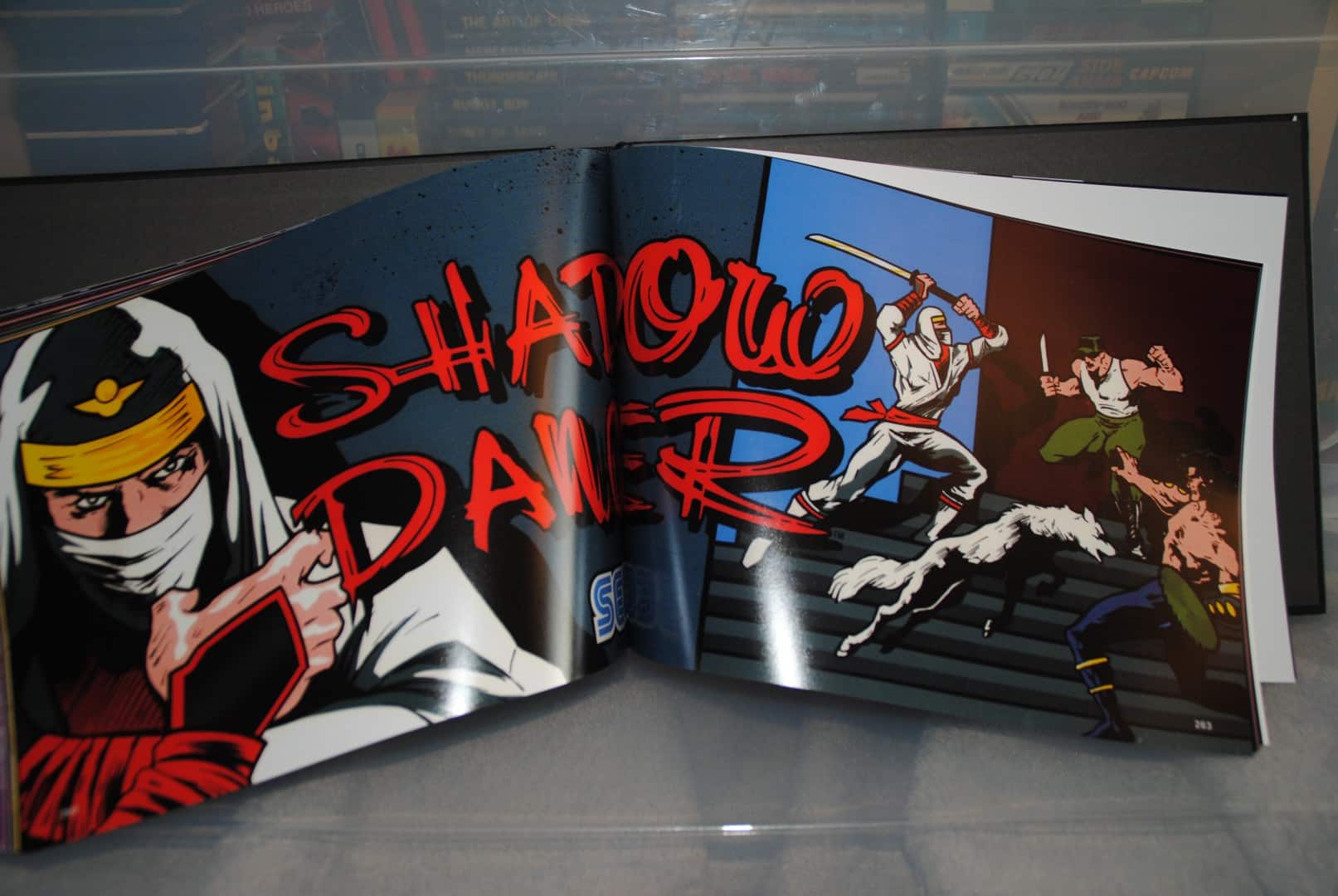 The restoration included among other things color correcting, digitally, scanning in very high resolutions and piecing them together again which ain’t an easy task when such a high resolution is involved. 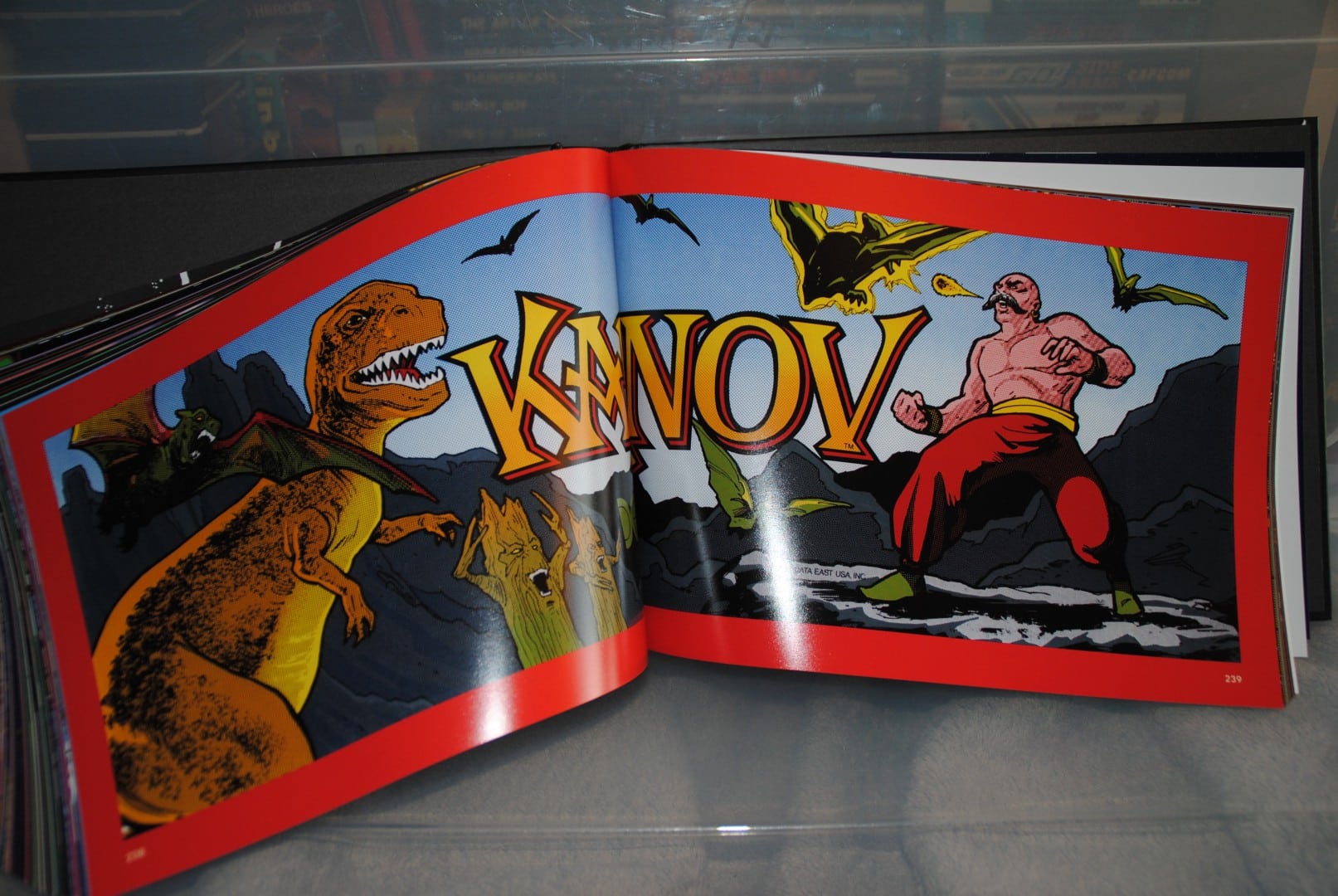 Even if the book exceeds over 300 pages it still doesn’t cover the whole collection in his posession, why these wasn’t included i don’t know, maybe they will be included in a later book?. 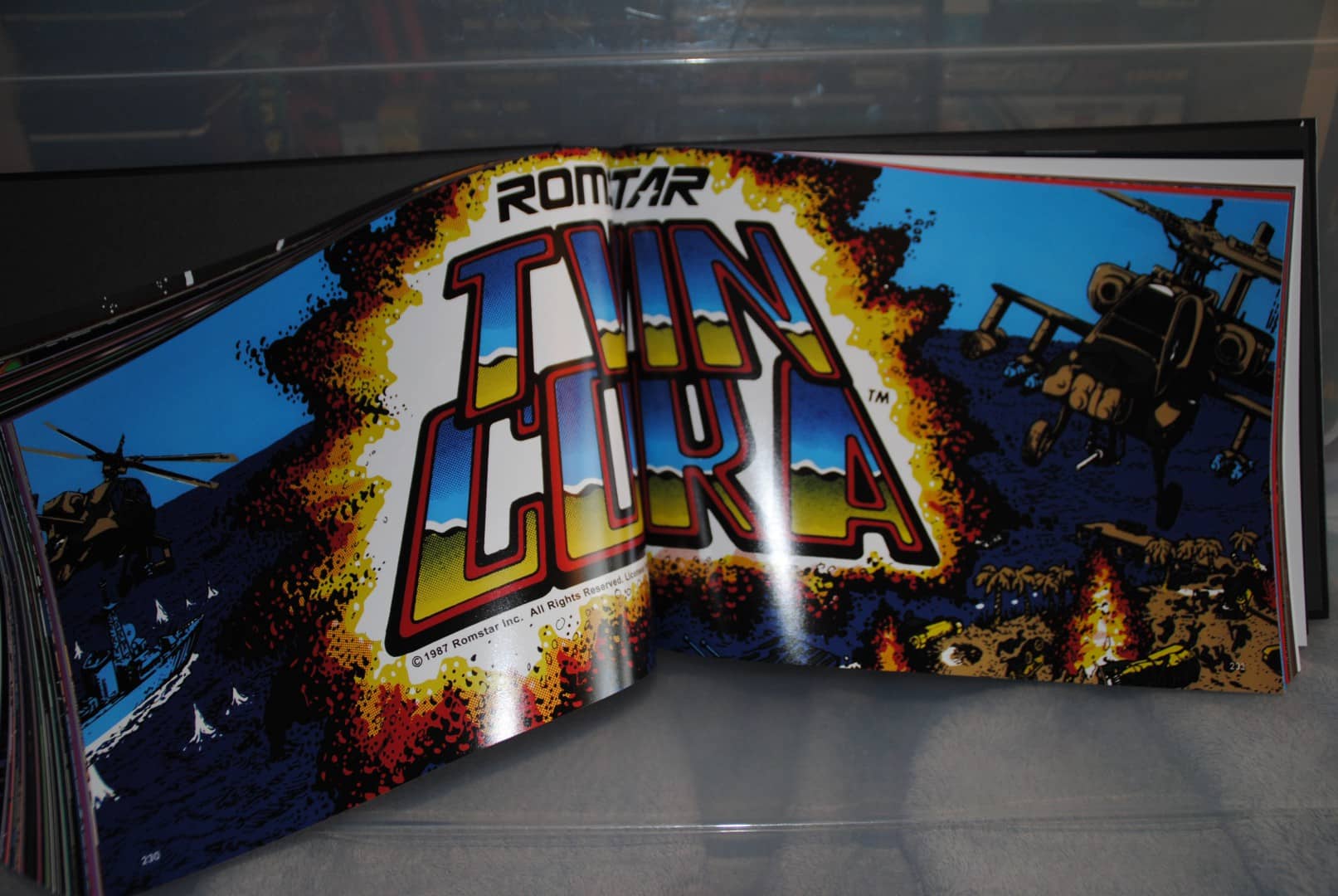 ARTCADE includes an interview with the legendary Python Anghelo whom did the artwork for cabinets, and one of them was the classic Williams game Joust.

This was the last interview/media pressence he did as he passed away a month after this very interview (cancer). 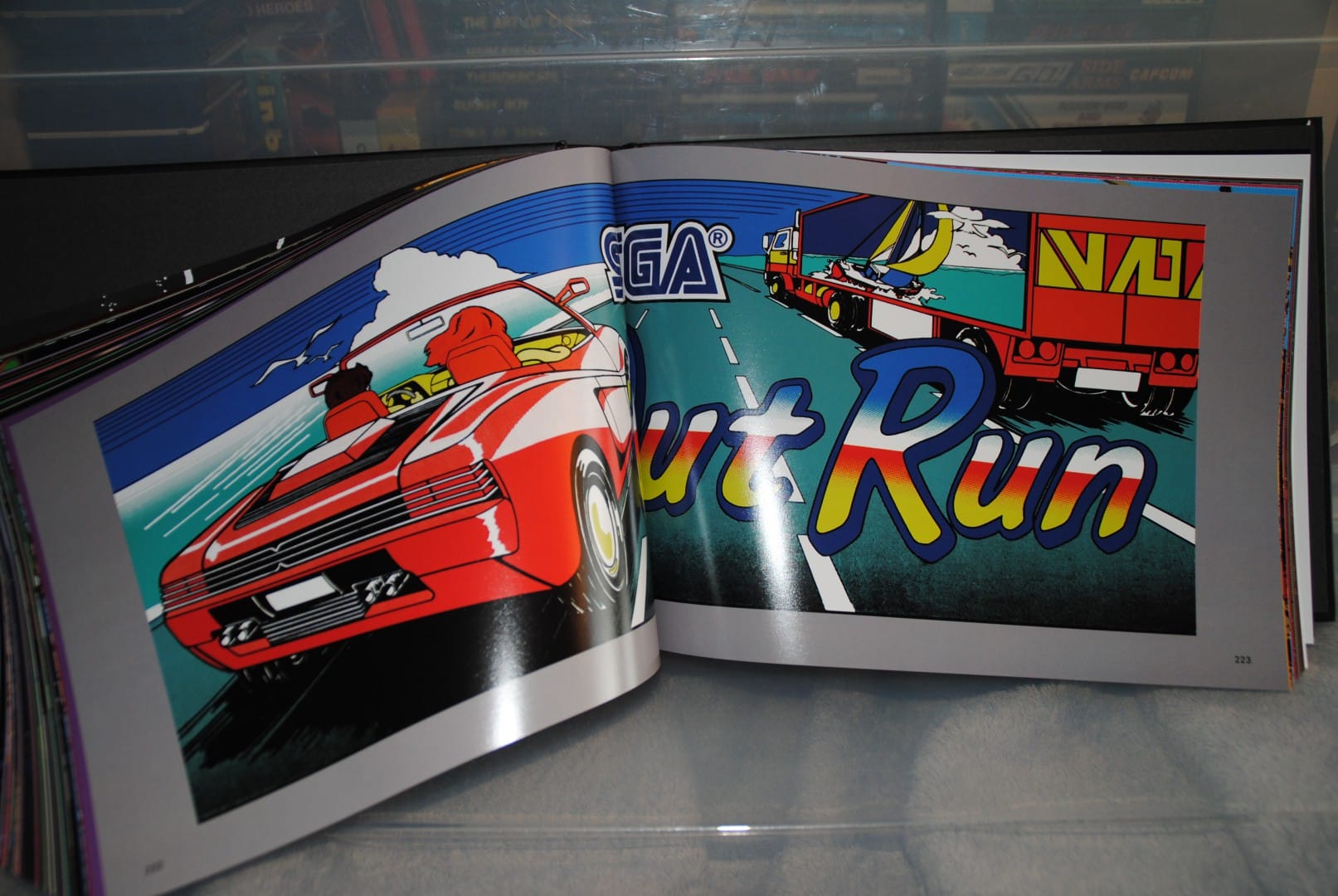 Honestly, i never expected this book to be “all that” when it came to making me travel back in time, i was afterall an Amiga /C64 fan back then.

I was wrong, the book triggered (and still do) so many memories, both lost and remembered from the yesteryears. 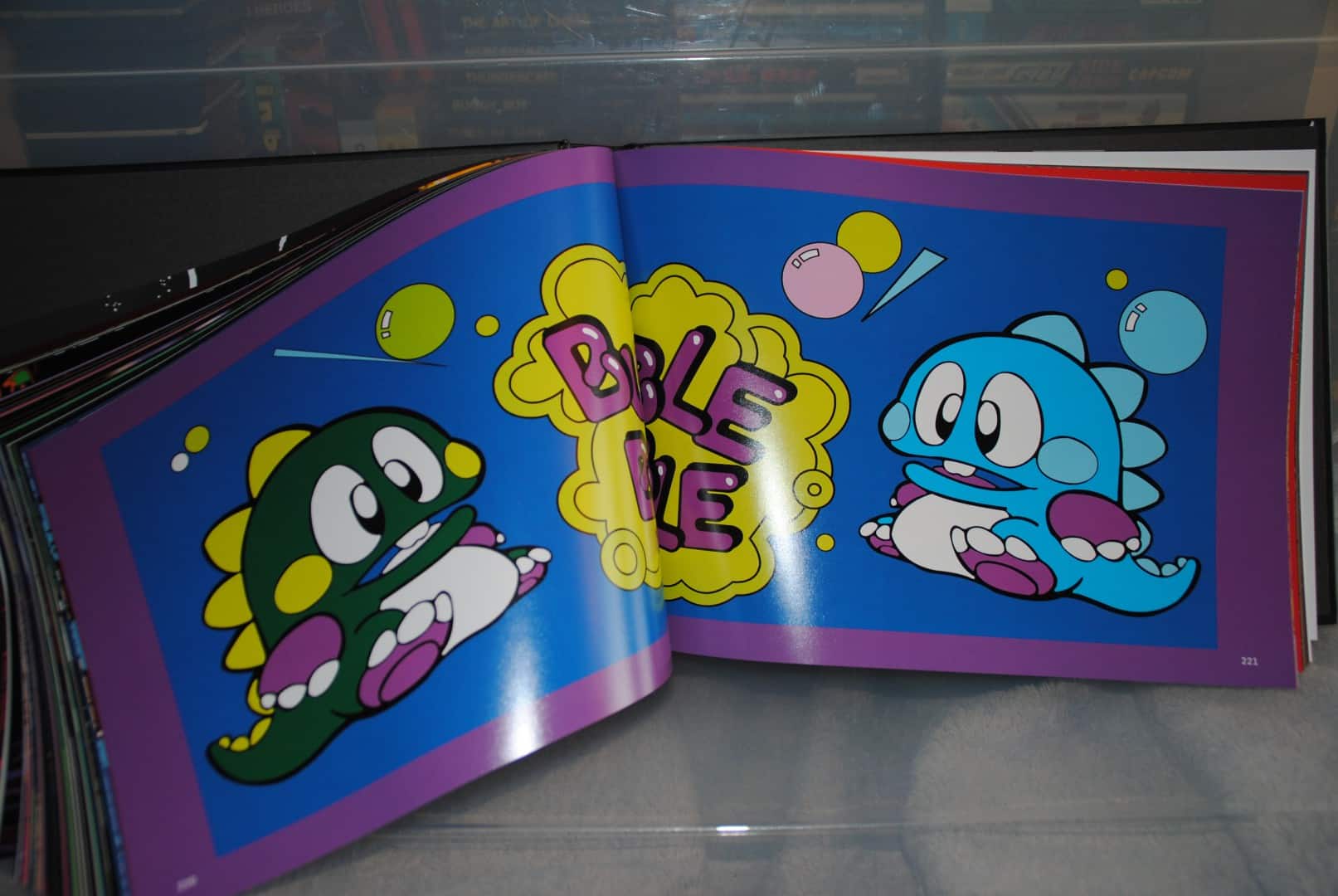 I never got to see all that many marquees in the past really because we mostly got jamma(?) boards back then, boring wooden brandless cabinets with random games in them.

The local Arcade had at most 12 arcade machines and 2 pinball tables at the same time, regularly replaced with new games every 3rd month or so, some maybe longer if popular. 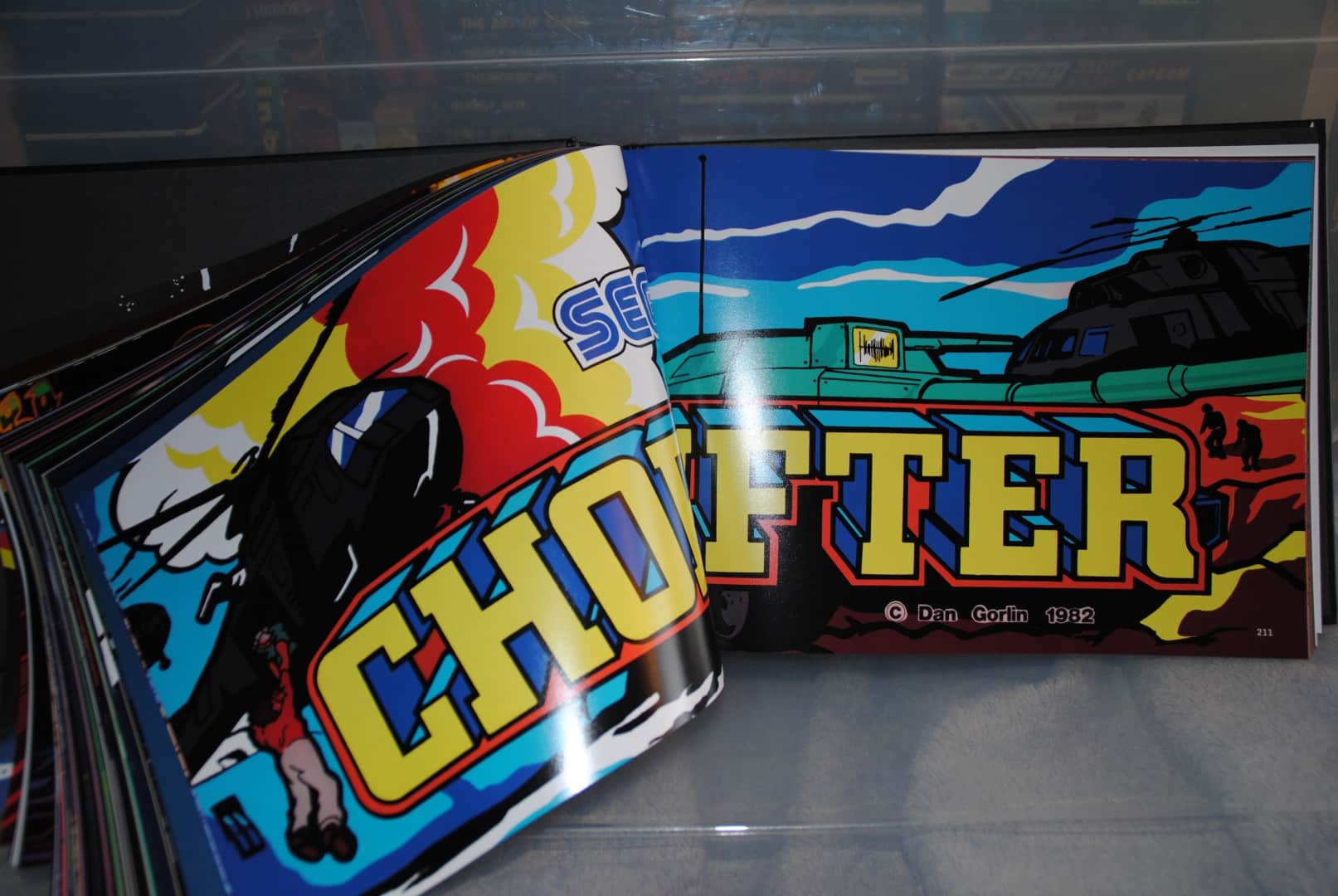 The arcade went away in the early 90s so i barely got to see other machines after that, Arcades wasn’t all that popular here.

Luckily we had the Amiga and consoles to keep us happy, both with Arcade ports and console/computer exclusives. 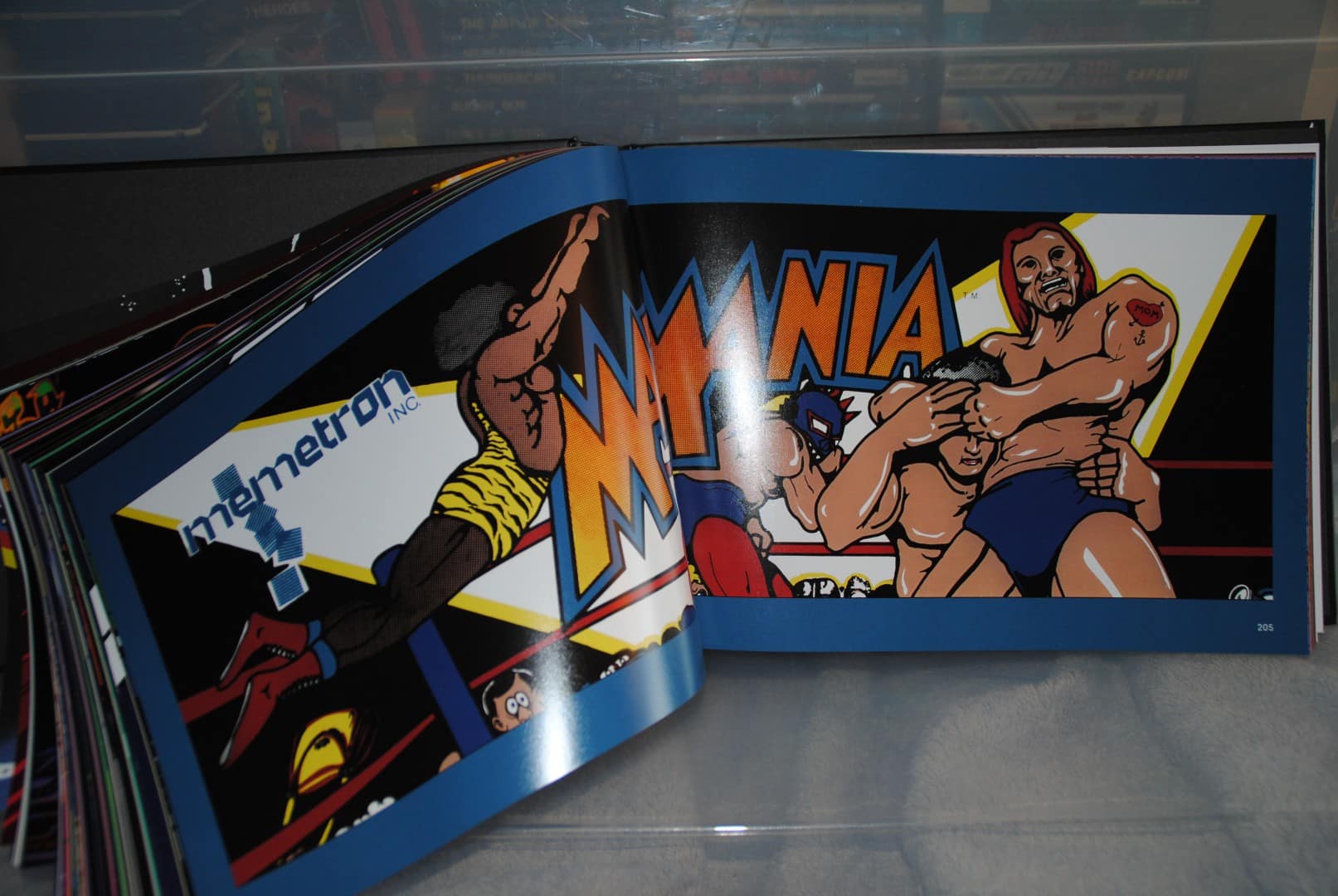 The book is so full of artwork that i sometimes had problems indentifying all of them.

I have used M.A.M.E a lot, especially from 1999 to 2005 which means i have tried a lot of the games i used to play in the arcades, but nothing beats seeing the box art of a game and that is the same with these marquees. 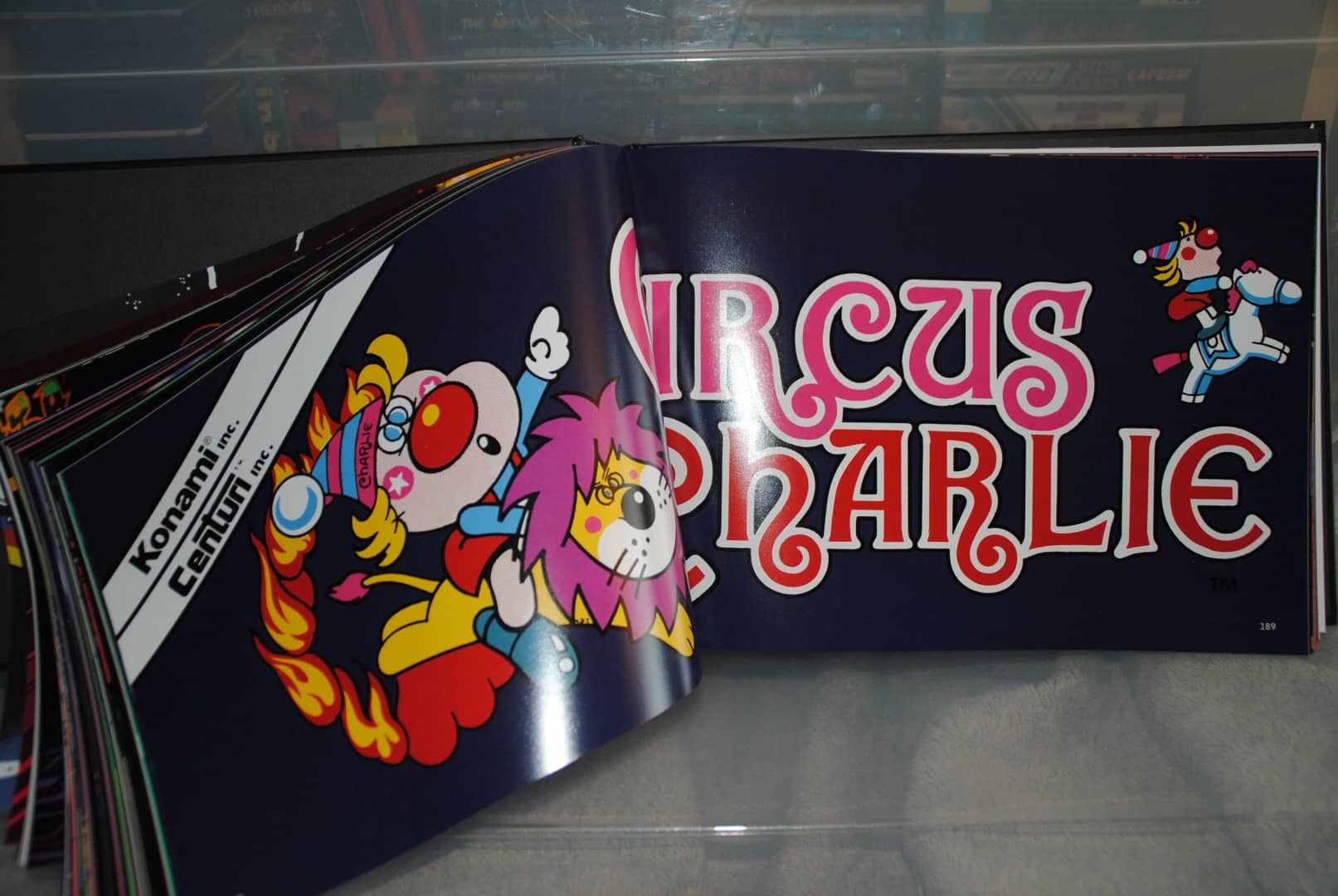 Colorful signs most likely attracted more people to them and i wish we had seen more of these things in the past, the only ones we got here was exclusive ones like Afterburner, Out Run, R360 and so on. 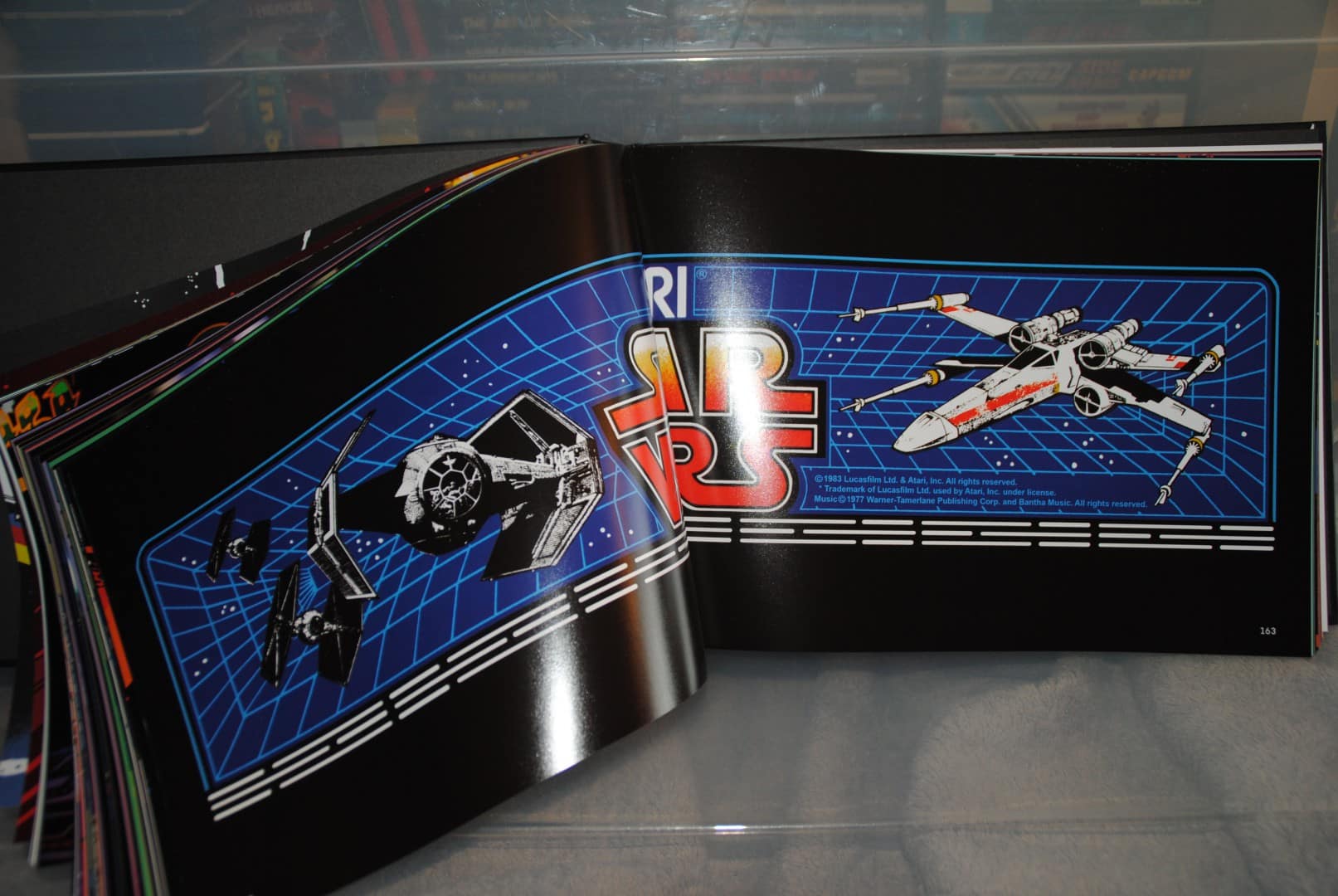 This STAR WARS game was one of the few i got to see on release, absolutely one of my favourite arcades of all time. 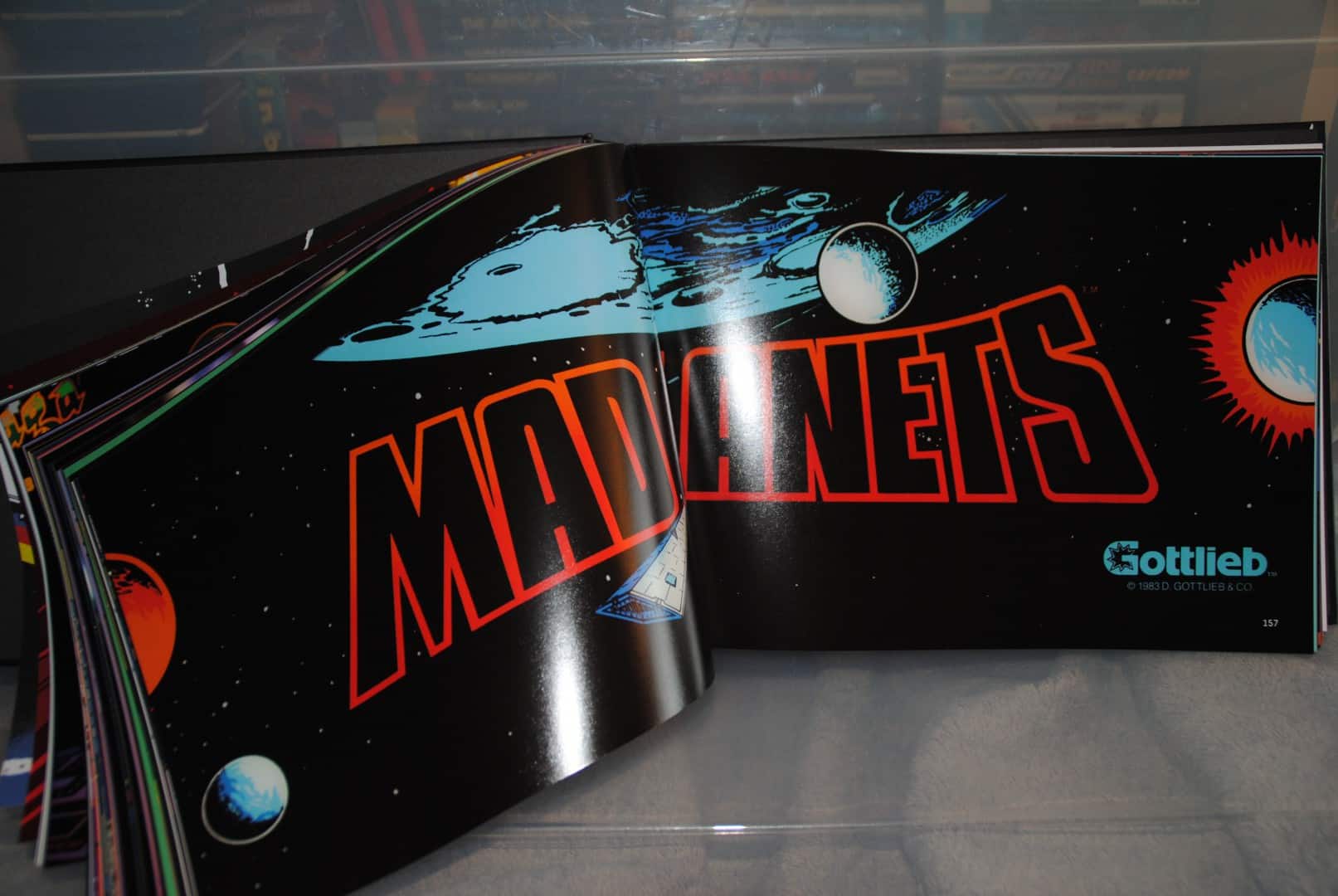 There are lots of games in here that i have never heard of.

I take this book as a tip and inspiration to install M.A.M.E again and try every single game mentioned in the book. 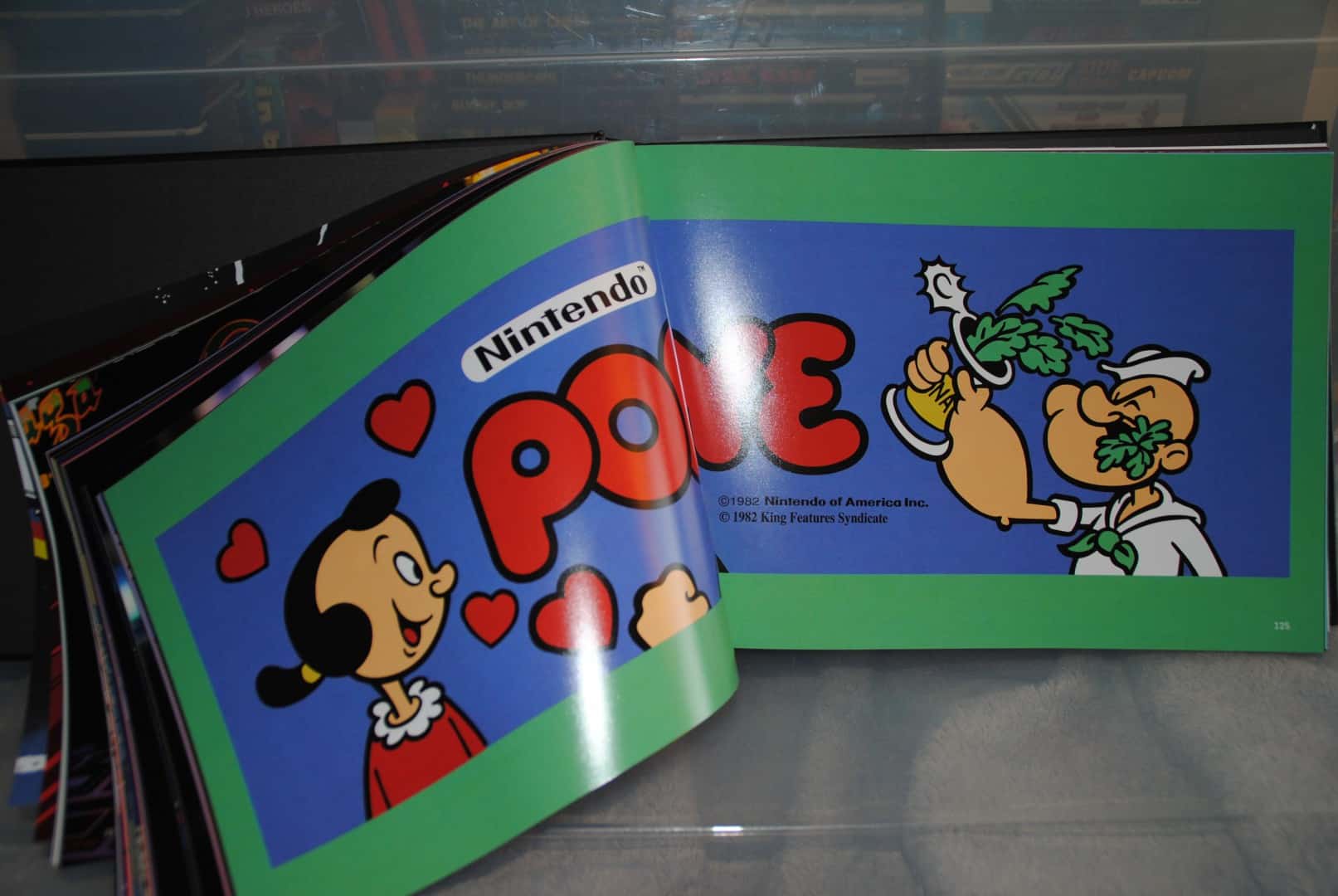 Great game that i played a lot both on Arcade and on the NES/Famicom back in the day, many of you probably never saw the Amiga port by Bignoia as this game was never mentioned in the magazines at the time. 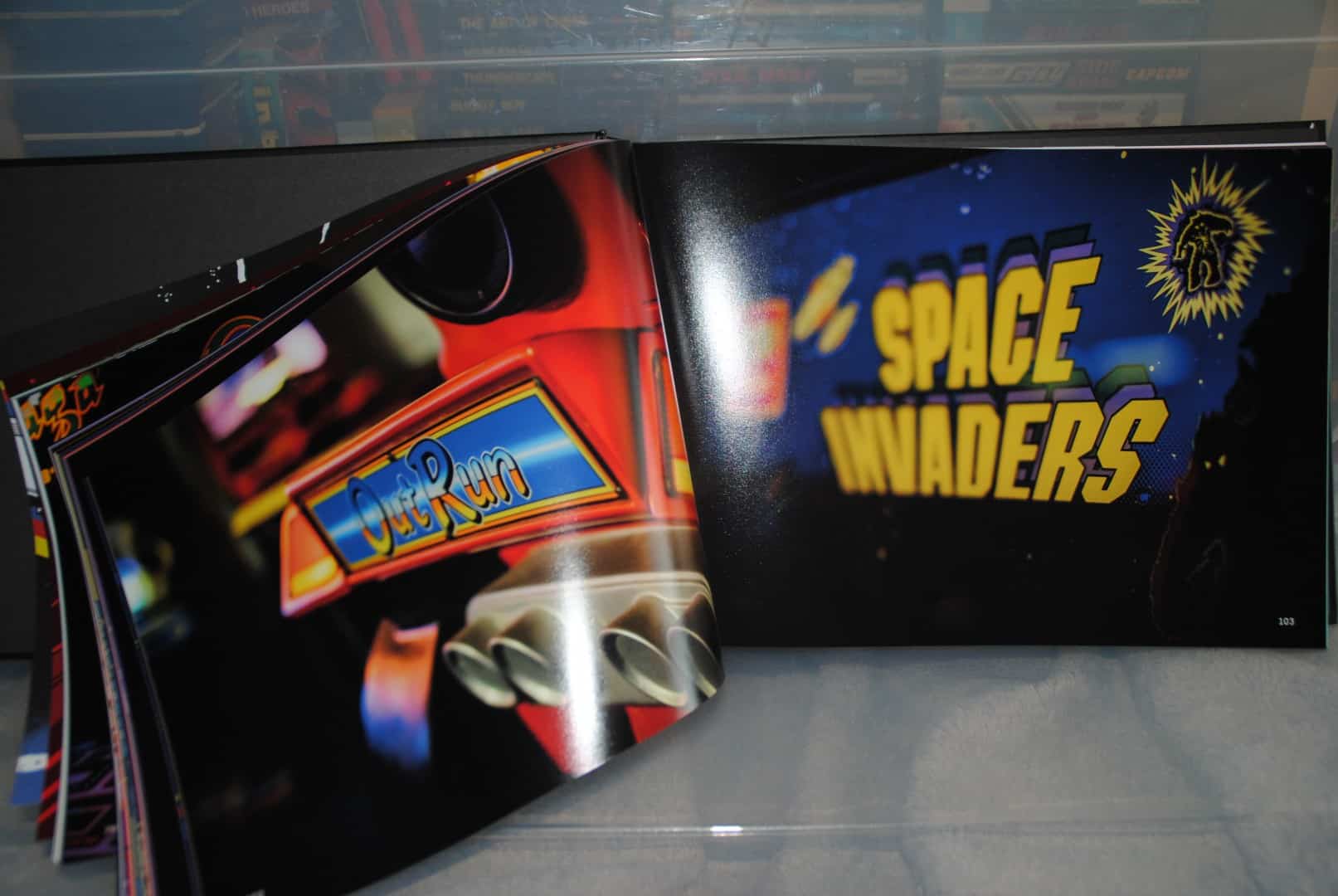 Another picture of Out Run, as many know this is one of the games i like the most and i can safe say that is in my top 10 arcade games of all time.

Cool to see they included this picture too. 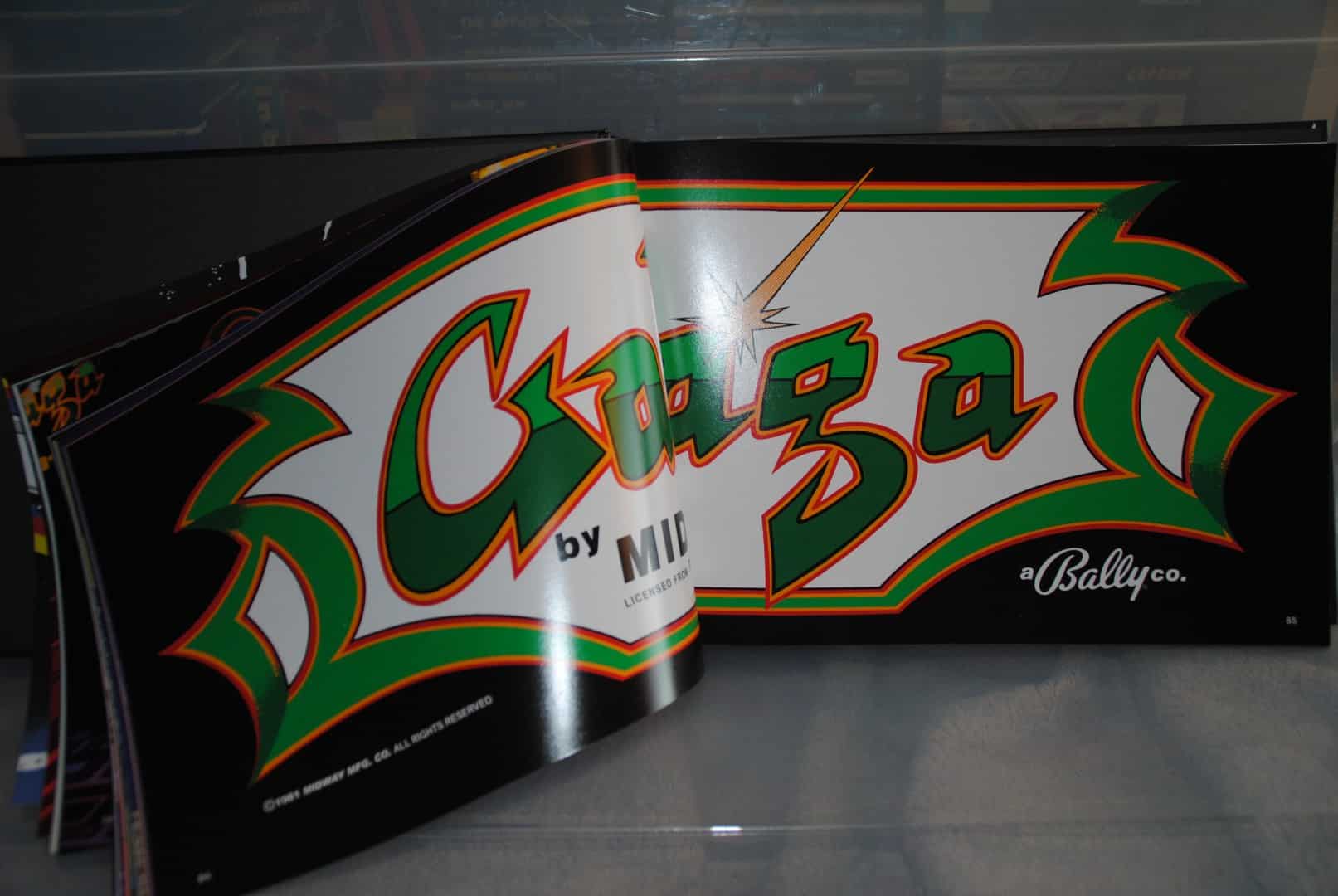 I have never liked Galaga but i decided to include the book image as i know this is one of those games that sold to gold back in the day.

If you like or dislike this game then i suggest you try Warblade (PC) or Deluxe Galaga on the Amiga, both amazing games and a lot better than this game. 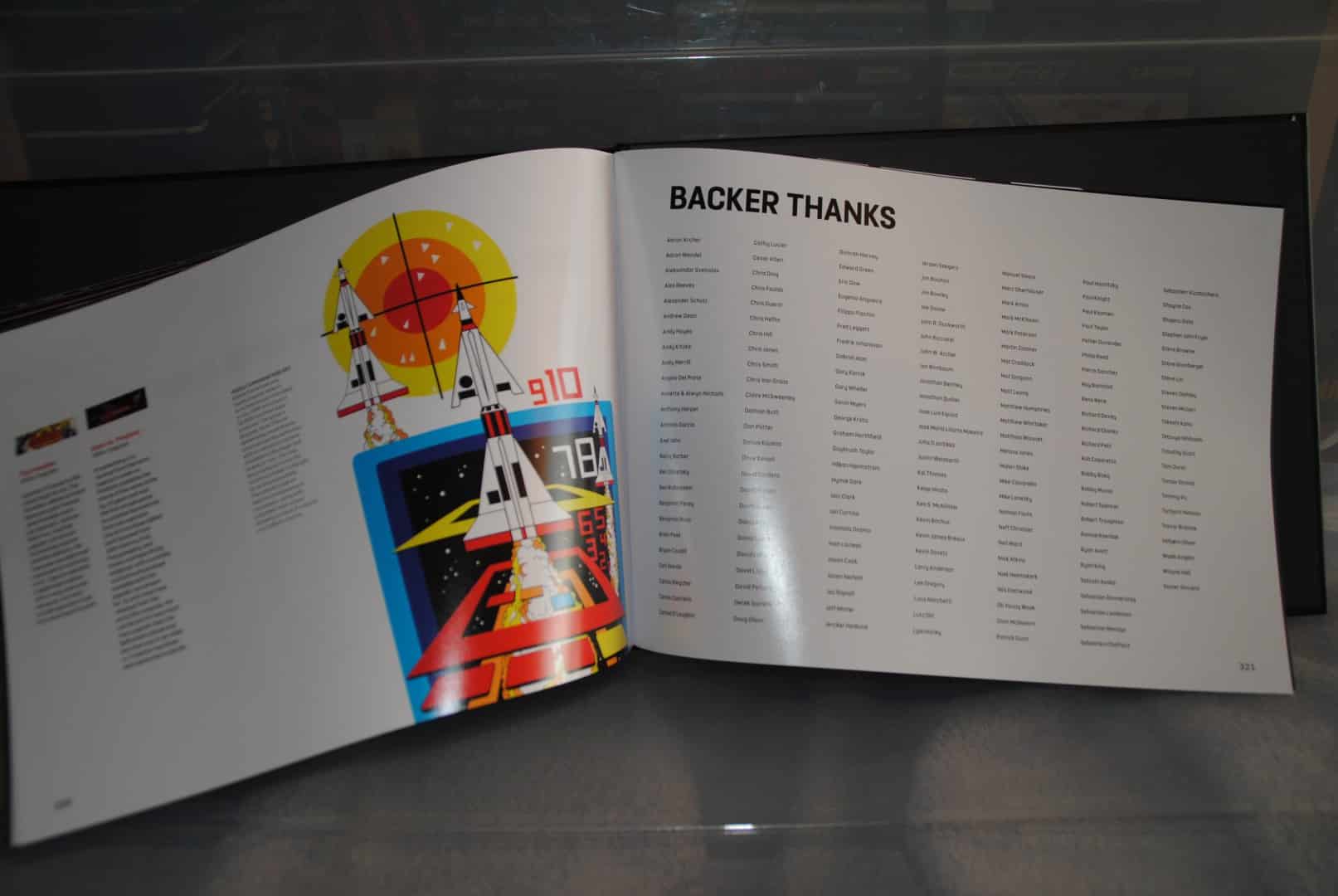 The book included a list of all the backers/pledgers of the kickstarter campaign, a really cool idea and one i hope will become a tradition and norm for the future projects. 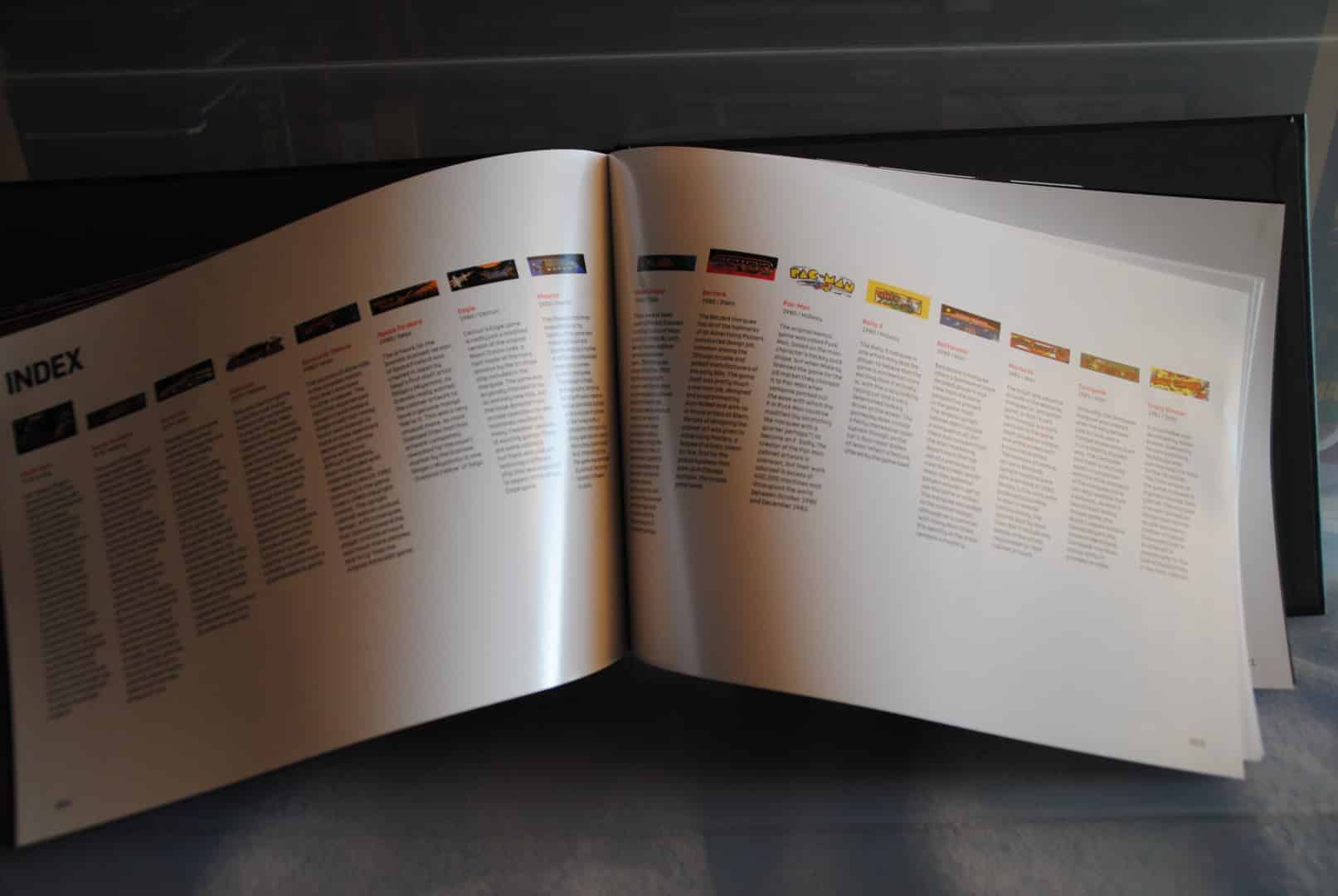 The index page in the book is another great idea, pictures of every game and maybe best of all quite a lot of text with information that many people will enjoy.

Ok enough pictures from the book, keep in mind that the book have over 300 pages and that this article consists only a few of them. 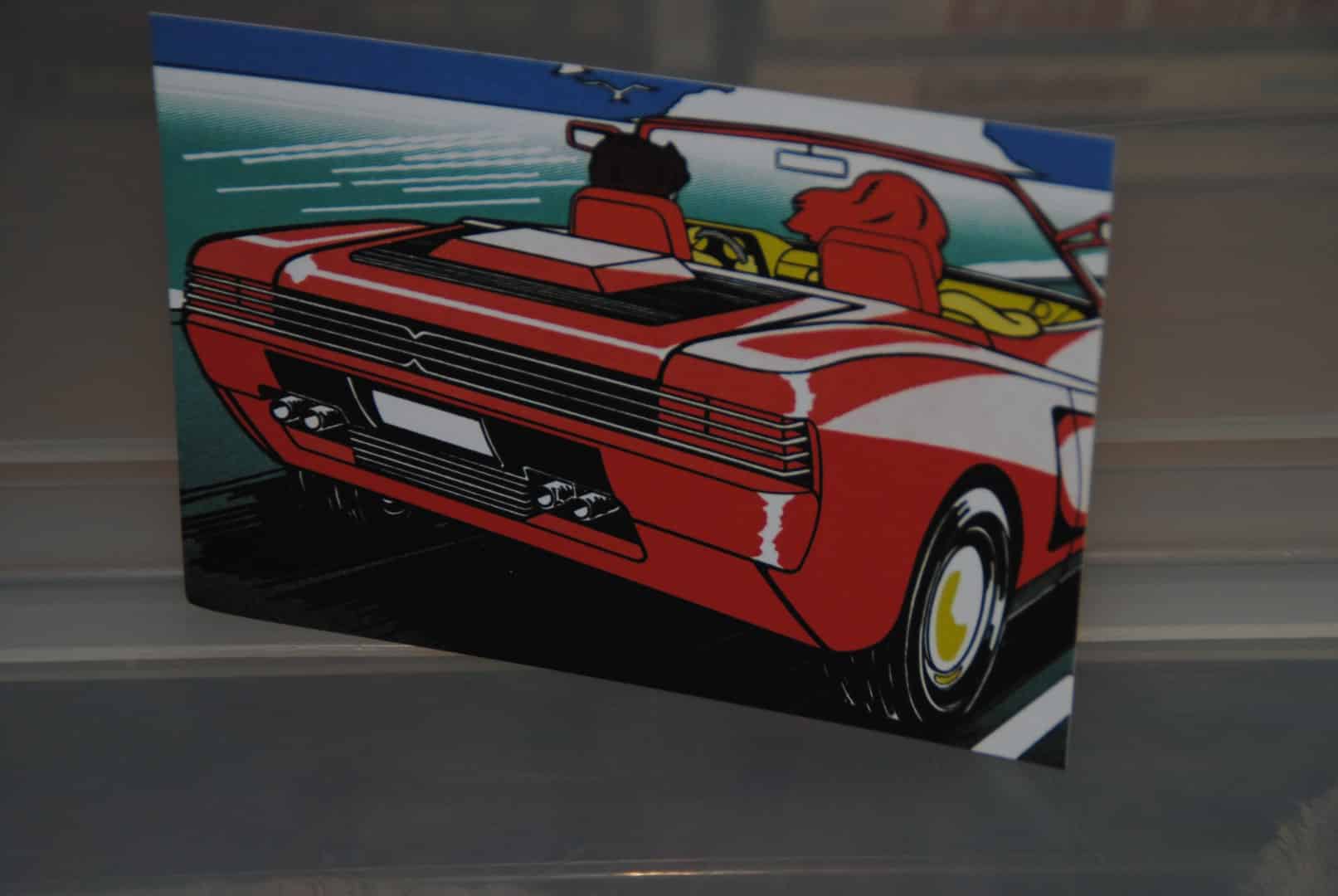 There’s even a bonus in the package, five art postcards which was selected by the author of the book.

The OutRun postcard is one of the five and that one was enough for me really. 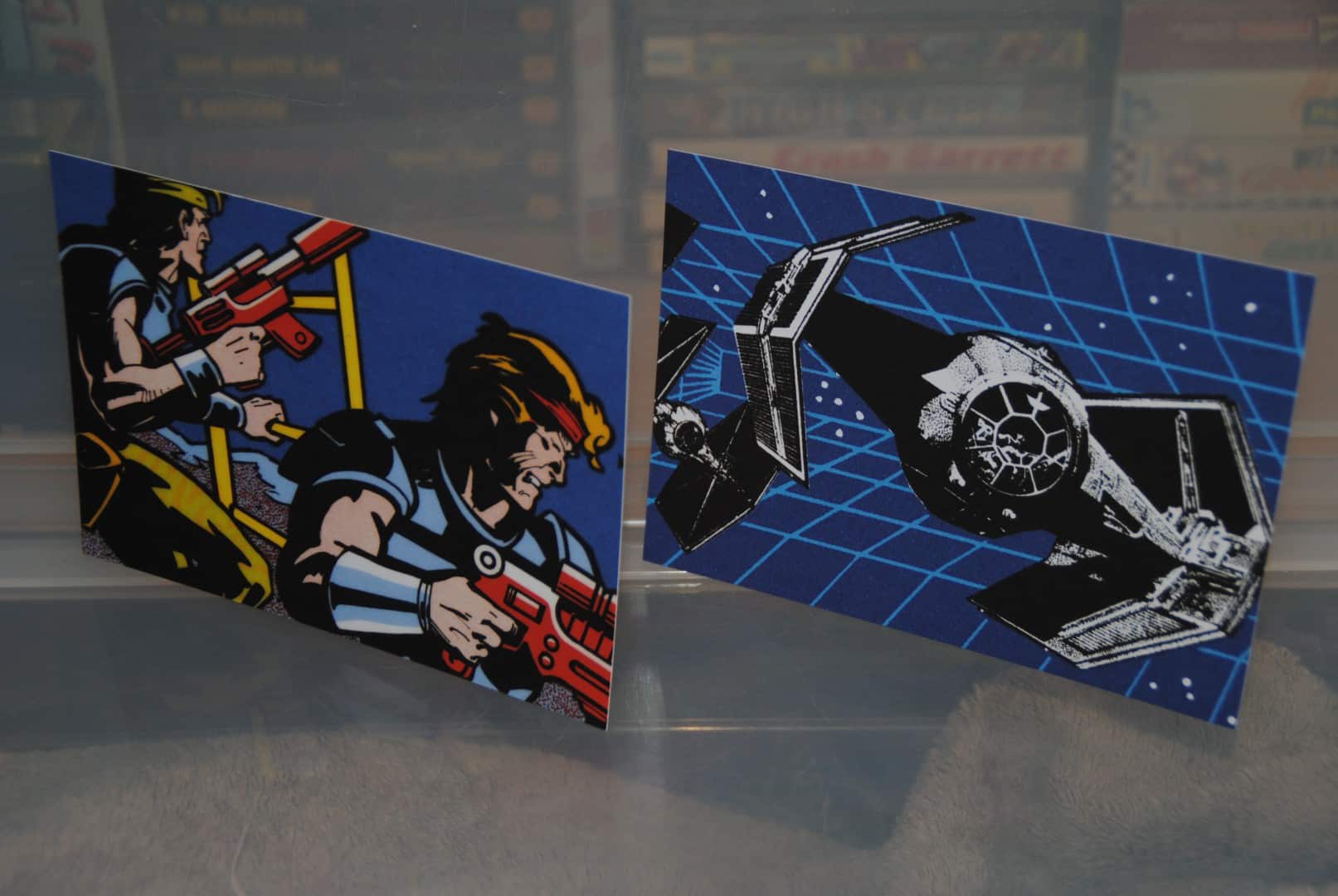 STAR WARS postcard? , ok that’s another good one for me. 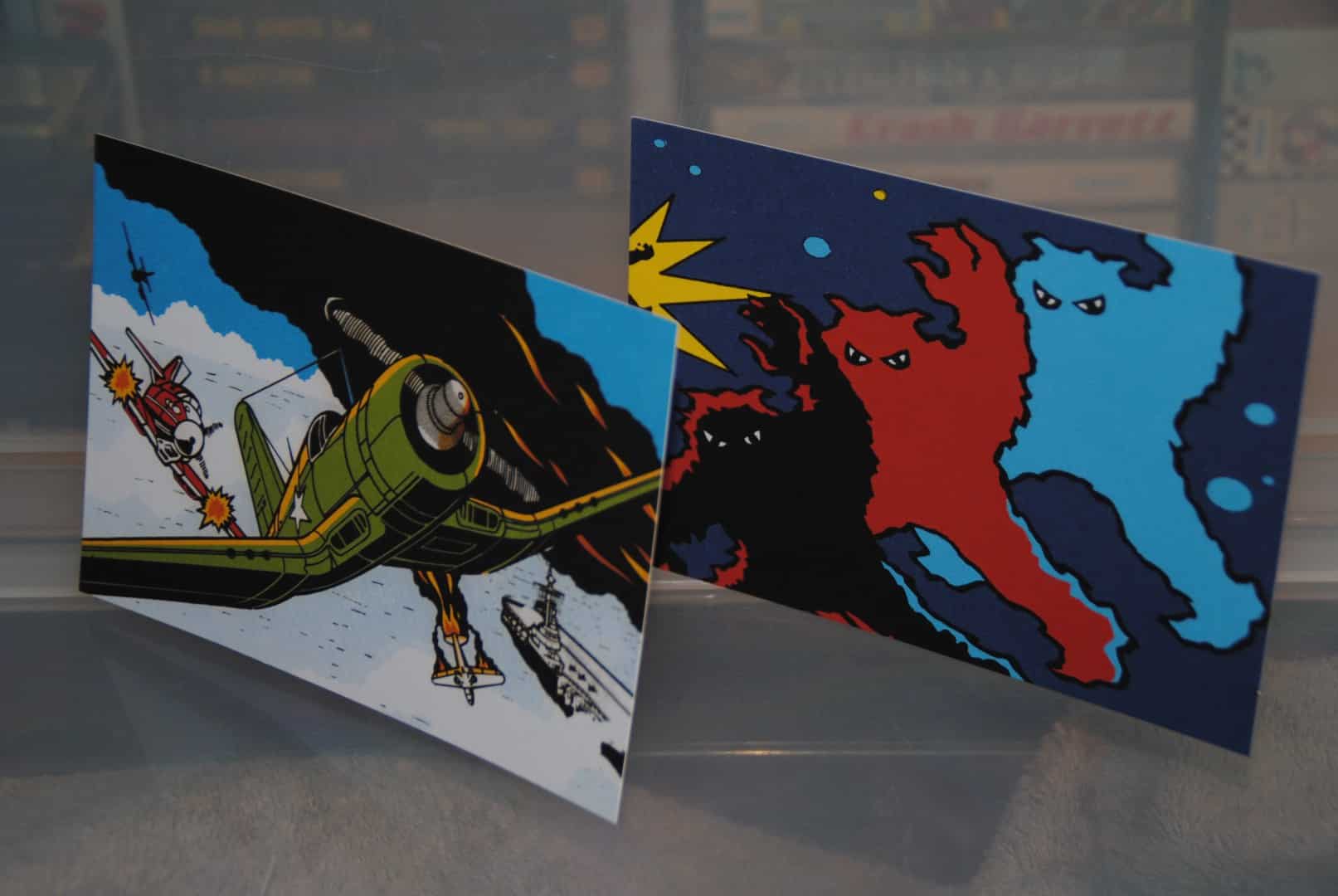 1942 postcard too?, ok this package has really fullfilled my expectations with both bonuses and the book itself.

1942 is one of those games that i always fire up in my c64 emulator (VICE), wonderful game and together with Combat School and Bubble Bobble makes the retro evenings perfect.

The ARTCADE book is one of high quality, hardback, properly binded and a pleasure to go back in time with, but, for me, it stops there

I appreciate the work they have put into this and i am happy that i bought it, and i can warmly recommend it…

This book will be on my bookshelf together with all the other retro books, and as with the others, i will, of course, browse through it from time to time.

Want to get ARTCADE? , i suggest you shop it at Funstock.