Oh, how the media/press can hype up crap! , it seems to be quite a common thing with old Xbox and PC titles as i keep hearing and reading rave reviews when the games got released as exclusives, to name a few… FEZ, Braid, Bioshock, and FarCry.
I have always had the impression that Farcry 1 was the best one in the series and this impression was based on reviews back when the game came out as well as friends and workmates usual hype.
Farcry was re-released as a multiplatform game earlier this year and along with the re-release came, of course, HD graphics and best of all was the price so there was no reason at all to not grab it. 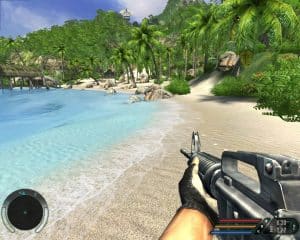 It’s been on my hard drive since February and i always wanted to give it a go but never did until a few weeks ago when a friend from work wanted to give it a try as he used to play it a lot on the PC back in the day…
It wasn’t far in that i realized that this game was overhyped and i was unsure if this was just the remake or if in fact, the original had the very same issues… I have yet to confirm this but now that i have completed and platinumed it i can safely say that this is one of the worst games i have played this year, bugs all over the place, horrible AI and just very, very bad graphics and while some of these things is understandable since it is a remake of a 10+-year-old game i still have issues understanding why they didn’t bother fixing and updating stuff in the game.

The game is standard fare and enjoyable enough, weapons feel strong and the selection is ok too and it has decent map sizes and vehicles etc control very nicely but the game is so full of bugs and glitches that the game will lock up the PS3 when you do mission objectives in a way that the designers didn’t think of, 1 example is that there’s a mission where you’re supposed to paraglide onto a ship and blow the ship up and eventually a boss fight (chopper) will appear.. i never used the paraglider as i just swam out to the ship and planted the bomb and jumped into the water… game kept crashing several times but one time i managed to get the boss fight started but i couldn’t kill it… i spent all my ammo (4 weapons) but the boss wouldn’t die… 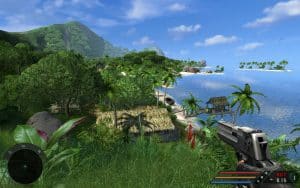 It took a while for me to understand that i wasn’t supposed to jump into the water after planting the bomb… i was supposed to stay on the ship and then the boss fight would start and 2 shots with the RPG would kill the boss…WTF?

There are so many broken things in this game, it saves all over the place and every time it does it creates a new save so when i had finished the game there was like 50+ savegames on the HDD… WTF?

I completed the game on HARD first and when i finished the campaign i realized that i had only a few trophies left to unlock before a platinum would pop… so i decided to go for it and since the game was on hard i wanted to switch it to easy so that i could get the trophies easier (stealth trophies etc)…. when i started a new game the game DELETED all my save games… WTF? , not a bug but a design!

Luckily i had my save games on the PlayStation Plus savegame cloud so it was easy to just redownload them.

I never got around to upload my bug footage since the streamer device decided to pretend it was recording, no idea what happened there… anyways, i did one movie though, check it below.

Glad i am done with this piece of turd game, i loved FarCry 3 and i am very ready for FarCry 4 which is due in less than 2 weeks!

Edit: My FarCry 4 Article can be found here…