The 3D platformer genre has been rather dead for the last decade or so, yes there was Crash Bandicoot, Mario, Ratchet, and the other usual suspects but other than that… not much else sadly. The PlayStation 2 era more or less destroyed that genre by flooding the market with platformers, by the time the PlayStation 3 gained traction there was a new genre everyone wanted to buy ” First Person Shooters”, mostly thanks to the success of Call of Duty 4 / Modern Warfare and this meant that 3D platformers were a thing of the past. 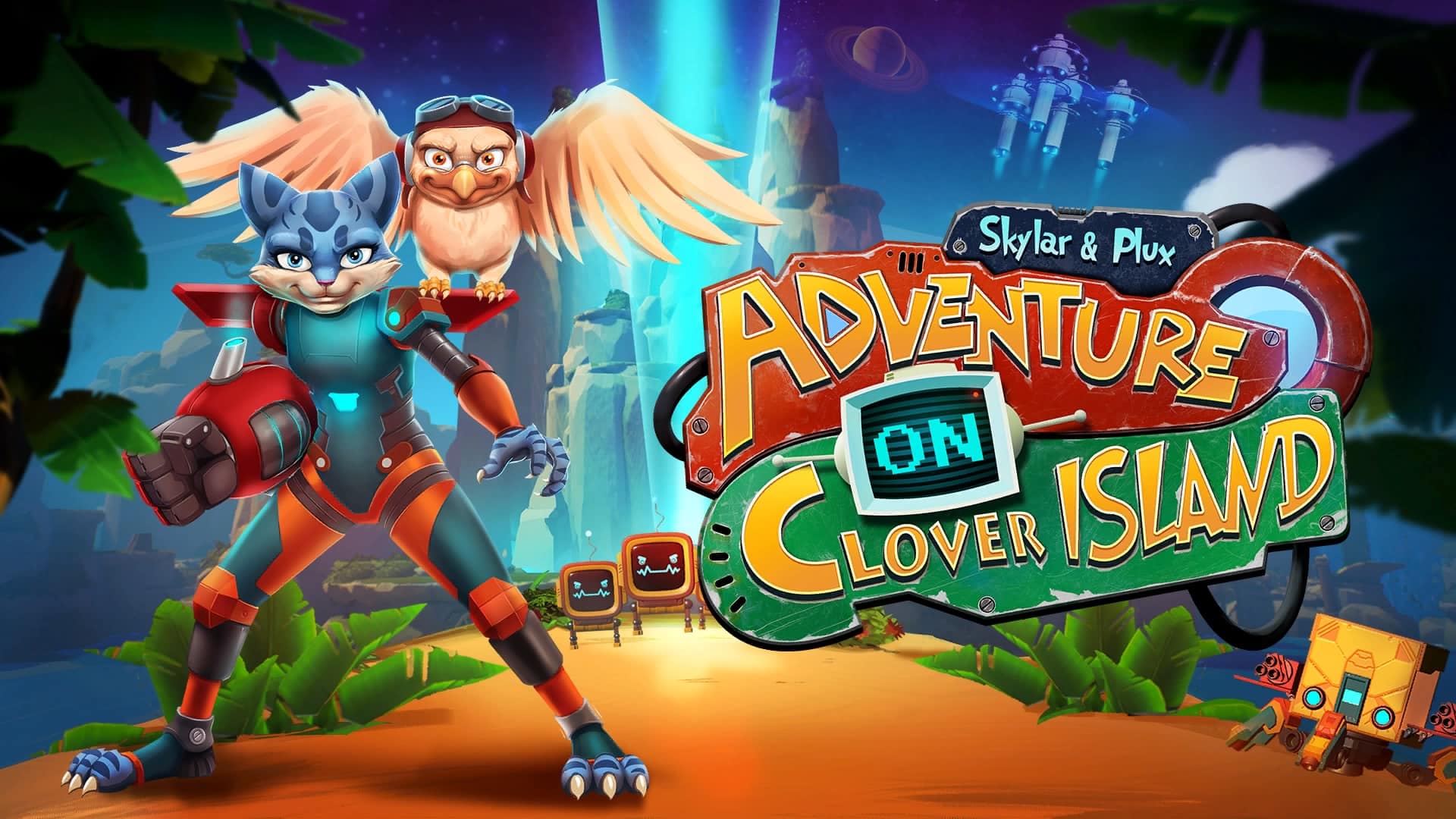 Skylar & Plux came out of nowhere last year and at first, I was really hyped for it but it ended up in the backlog due to the plethora of amazing PlayStation 4 titles in the same release window (hint – Crash Bandicoot etc).

I eventually picked it up again earlier this year and it didn’t take long before the game swallowed me whole with its smooth control system, lovely colorful graphics, and pretty good gameplay mechanics. 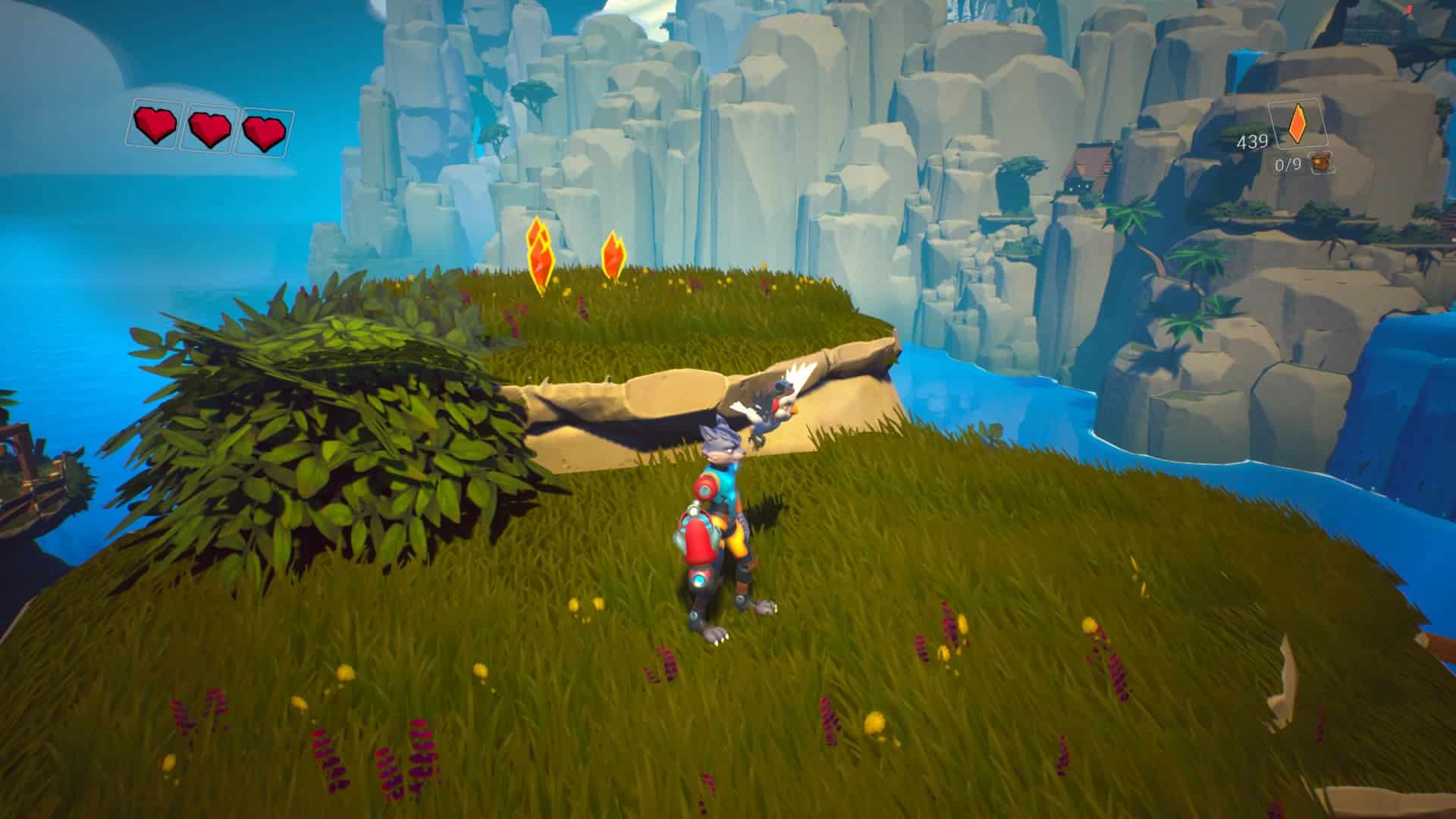 The graphics and style of the game scream Jak And Daxter / Ratchet & Clank / Sly Cooper and that ain’t a bad thing for one that loves that, it’s almost like a tribute to them.

The world is open and you can move around as you like although there is a story and progression system so don’t expect a sandbox game here.

The best part with the world is that everything is connected in a way that feels very natural in terms of finding an upgrade and where to use them an so on, there’s very little need for backtracking and such unless you’re going for a 100% collectable score.

The thing with Skylar & Plux is that this game probably wouldn’t have stood a chance if it was released a decade ago, the game is following a very typical formula and back then it wouldn’t have had a chance, but now? – quite the opposite really as there ain’t many of these being made anymore.

It feels like an old game albeit very polished, you won’t find anything fancy in the game other than a game that feels just right, funny, lovely with a pretty good art direction. 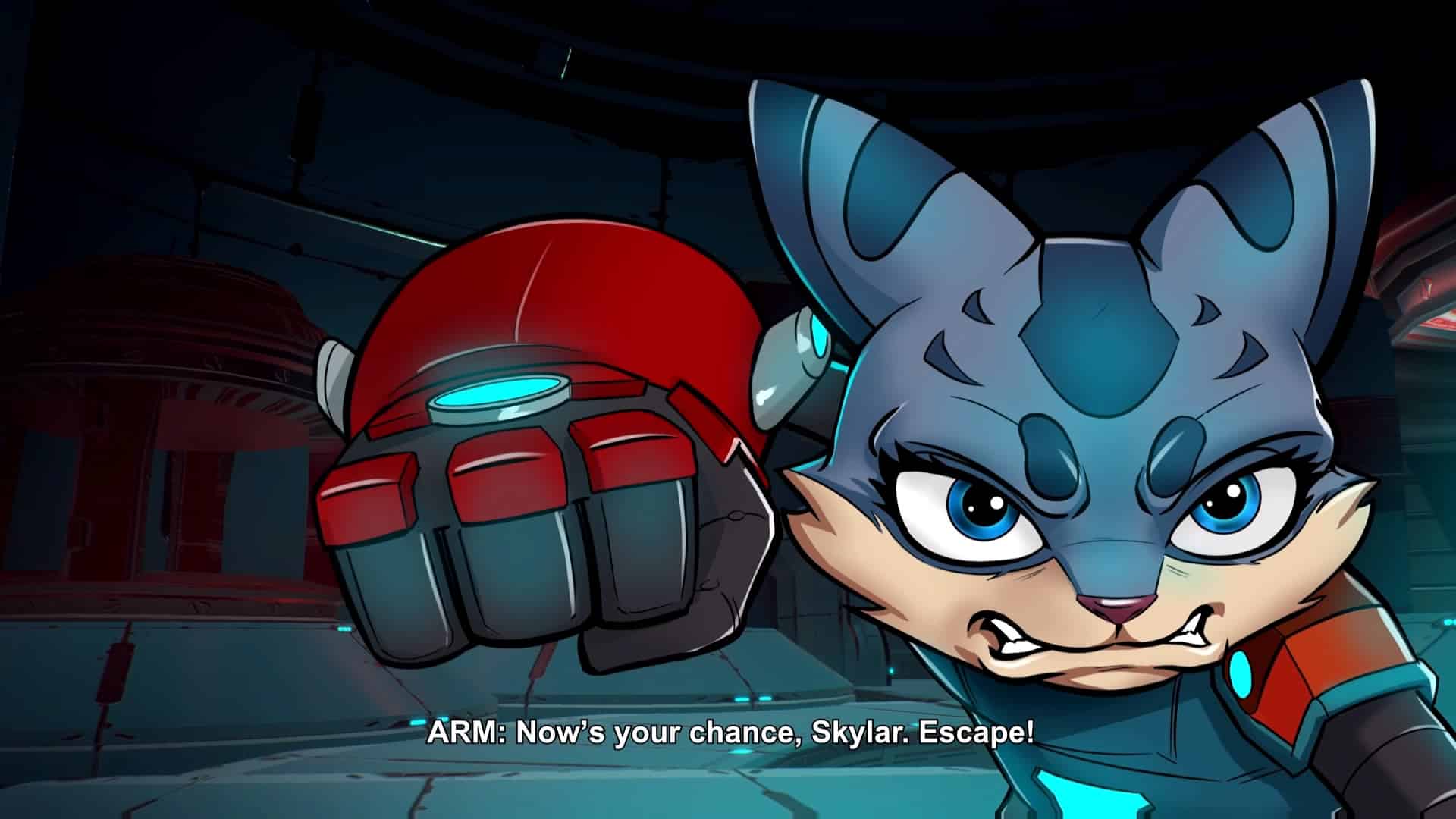 The game is as pure as it gets, no stupid long idiotic puzzles or whatever and while there are some simple short puzzles later in the game they never break the fun by making you doing stuff frustrating or boring.

It’s mostly things like find ball, roll ball to switch and a door opens… You know, the subtle stuff.

The key environments that every platformer need is in the game, Snow, Forest, Desert, Lava, technical world and so on, everything is in place and nicely accompanied by a dynamic soundtrack.

The controls and gameplay mechanics also got them typical things like double jump, glide, rocket pack and so on. 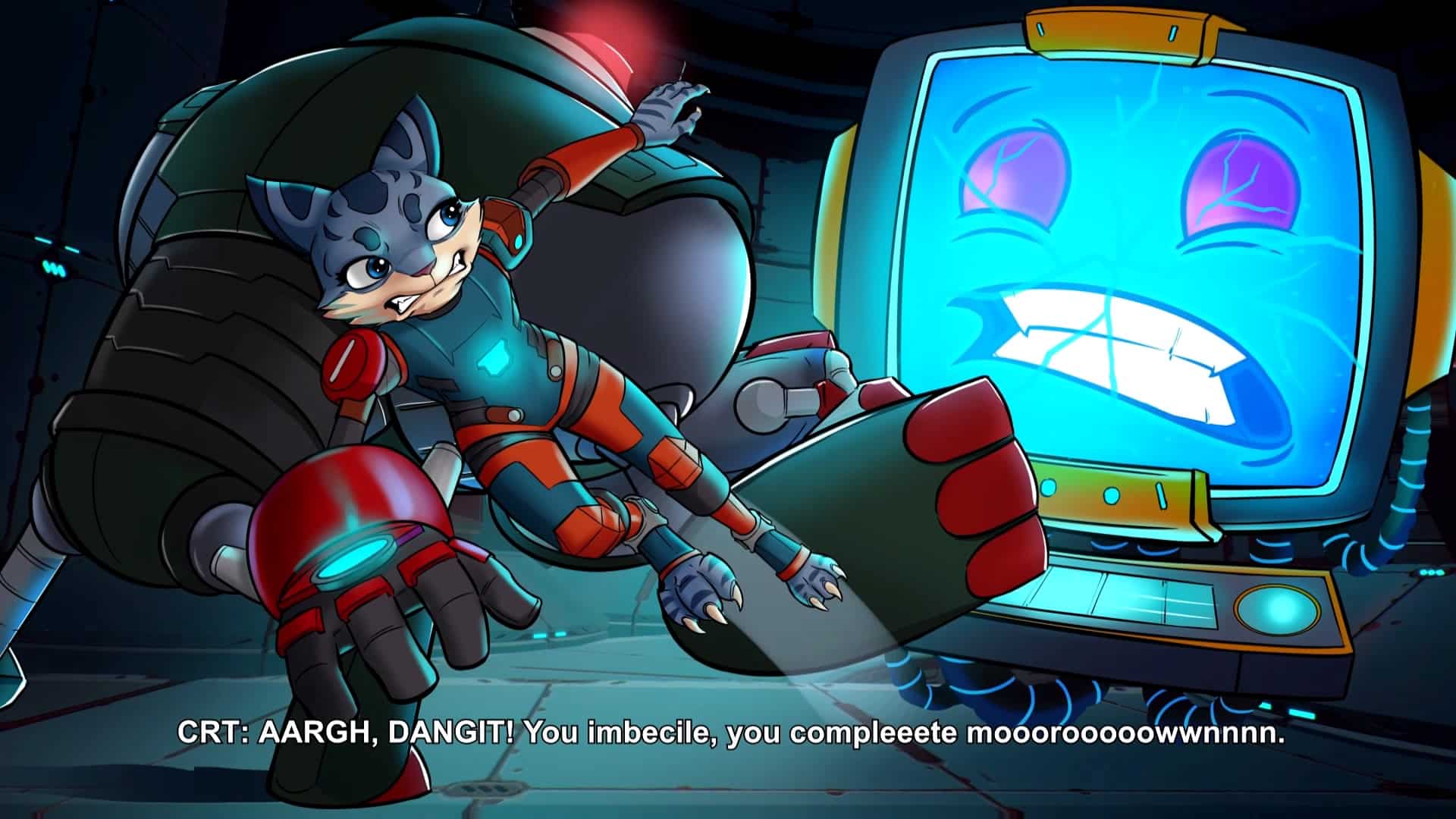 There are some rather cool cutscenes and pictures throughout the game, nothing groundbreaking or whatever but they got a very pure style that made me do a whole bunch of screenshots of them, good use of colours, clear style and they just stick.

The game is supposed to be funny too, but it won’t make you laugh out loud or anything which is a shame as we need more games with comic relief.

One of the worst things about the game has to be the frame pacing as it will for no reason what so ever start to judder every now and then which is very strange as it’s the same on both the PS4 and the PS4PRO console, oh and there ain’t a single technical reason for the game to run on anything less than 60fps.

I got one last complaint which is the length of the game, it’s only 3-4 hours long tops and the only reason to play more was to get a 100% trophy score, and guess what… that didn’t take too long either. 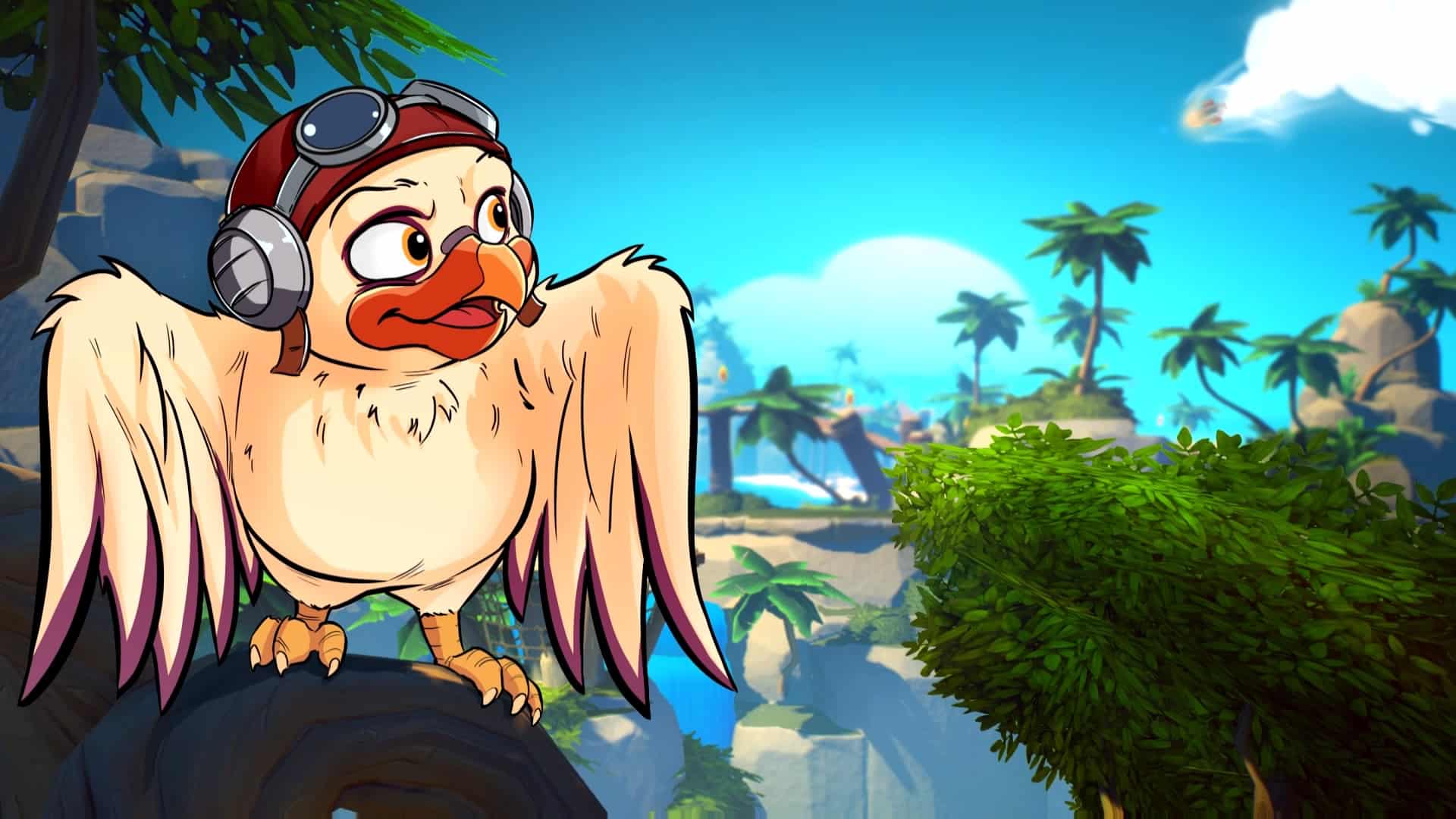 Skylar & Plux: Adventure On Clover Island is one of those games that could have been absolutely brilliant, but instead ended up as a half-cooked effort which never reached its full potential. The game does feel like a PlayStation 2 game at times but this is what most fans of the genre want, right?  Great controls, great style, solid gameplay mechanics make this one an easy grab when it is on sale, like right now when its 3.99 Euro on PSN. normal price is 14.99...

Check out the Launch Trailer below, well worth your time.