Dungeon Punks (is)/was one of the free PS+ games of November 2017 and maybe one of the best Cross-play games released on the service for a long, long time (Sky Force was brilliant too).  Yes, it’s one of those PS4/PS3 and PSVita crossplay titles and maybe best of all is that all three versions are included in one package.

So what is Dungeon Punks then? , well it’s actually a 2D Beat Em Up Brawler type of game ala Golden Axe although with RPG elements and levelling up etc.

A Mere two months ago i reviewed Knights Of Valour and i gave that a sturdy 7/10, a game which is quite similar to Dungeon Punks in many ways but damaged by the F2P concept in it. 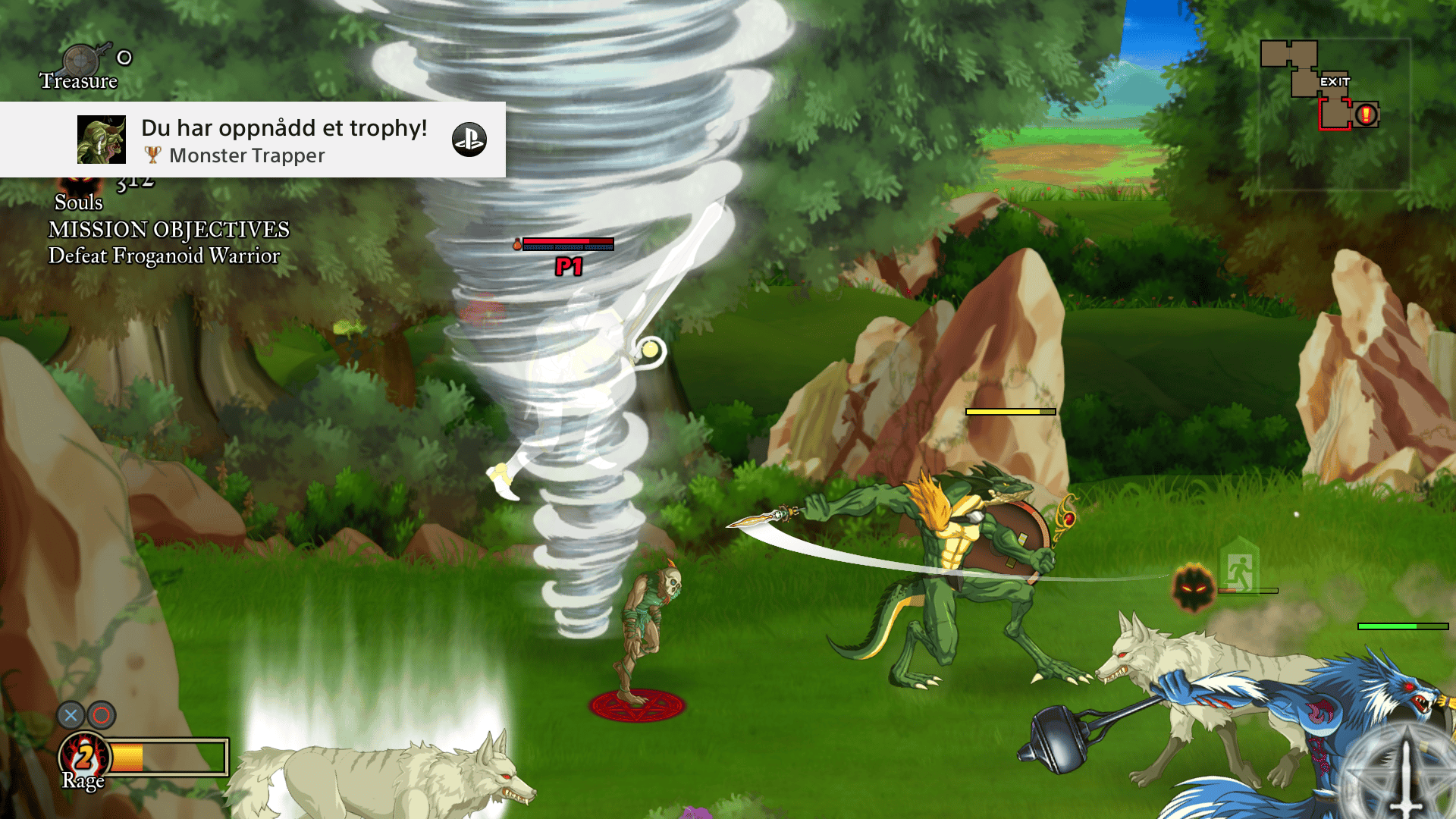 At first glance Dungeon Punks put me straight off, the name and the under title “TAG TEAM BRAWLER RPG” just sounded too much like a turn-based wannabe title to me really, luckily i decided to try the game i bit before i deleted it..  4 hours later and i was still playing and i simply could not put it down as i was hooked, very hooked!.

Dungeon Punks more or less fills the gap in the 2D Beat Em Up genre of late, Knights Of Valour was a good effort but became a bore to play over a longer period of time sadly, mostly due to the endless grinding and F2P elements. 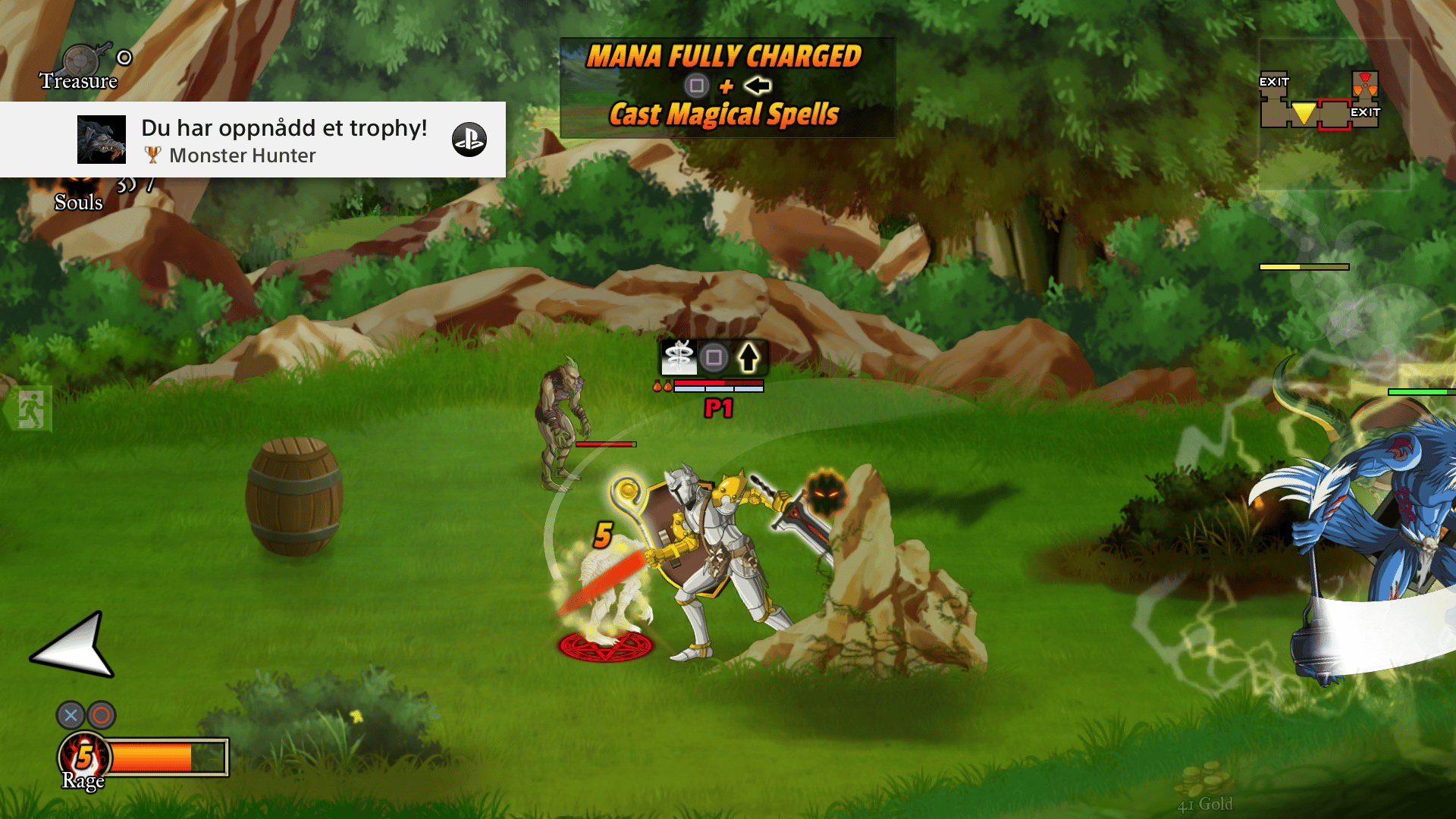 Dungeon Punks is very simplistic in both gameplay and mechanics, movement is slow at first and you more or less only got a few moves to pull off, but this soon changes when you level up your character(s), you always got two characters to switch between and eventually there will be a total of six in your “team”.

The game is basically a three-player couch co-op game but if you play alone the two other players will be controlled by the CPU.

You can switch between any of the other characters both in-game and in the main hub menu.

Every character got its own fighting style and super moves and you level them up individually too. 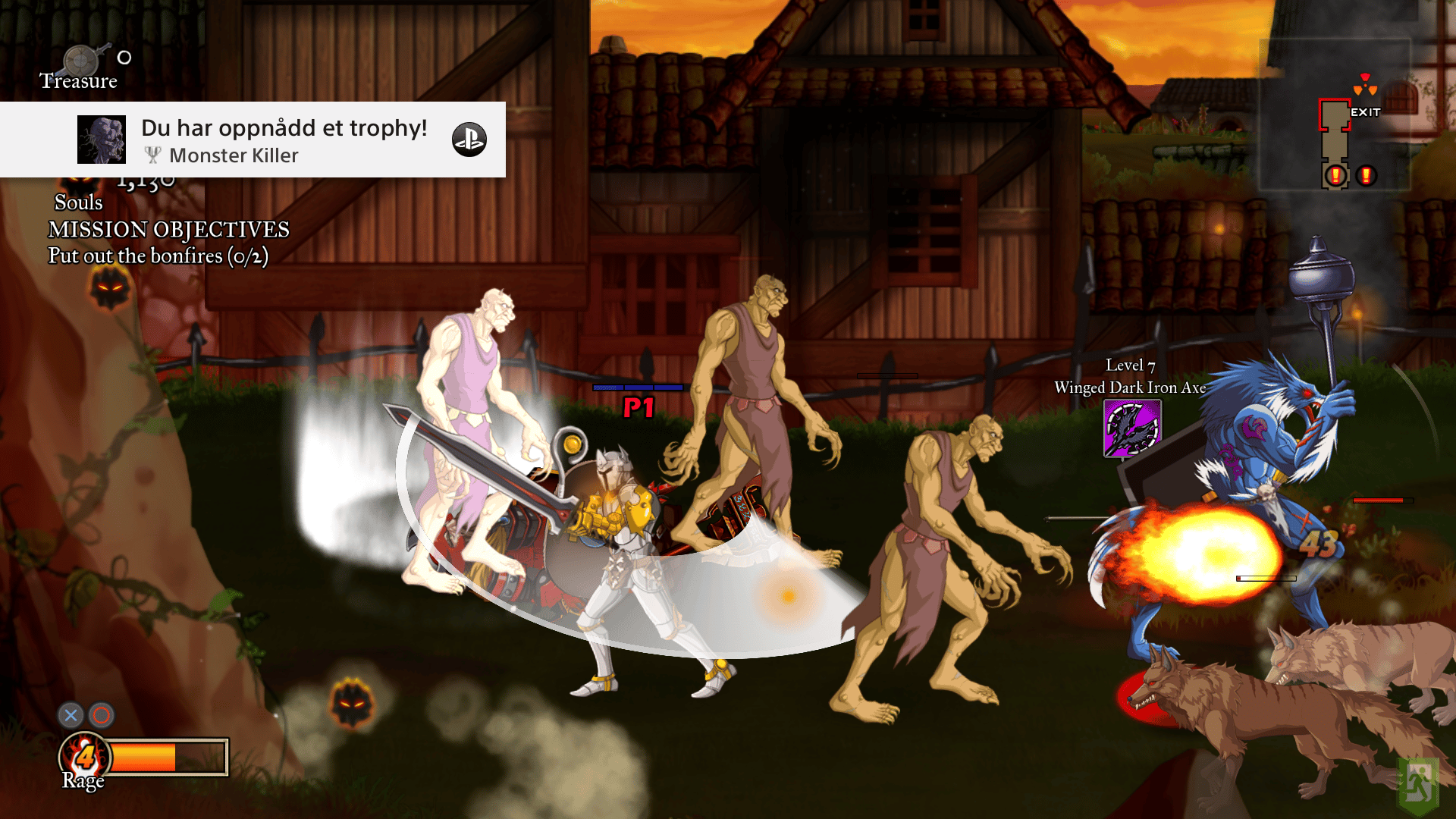 One of the twists in Dungeon Punks is the TAG TEAM option, it is basically only that when you are low on health or stuck in a fight or whatever then you can press the Circle button to call for help from your secondary character, and then you will control that character until you press the button again.

So does it work? well, i must admit that i more or less never use the feature although i have used it from time to time but mostly when i need to heal my other “dead” character or whatever. 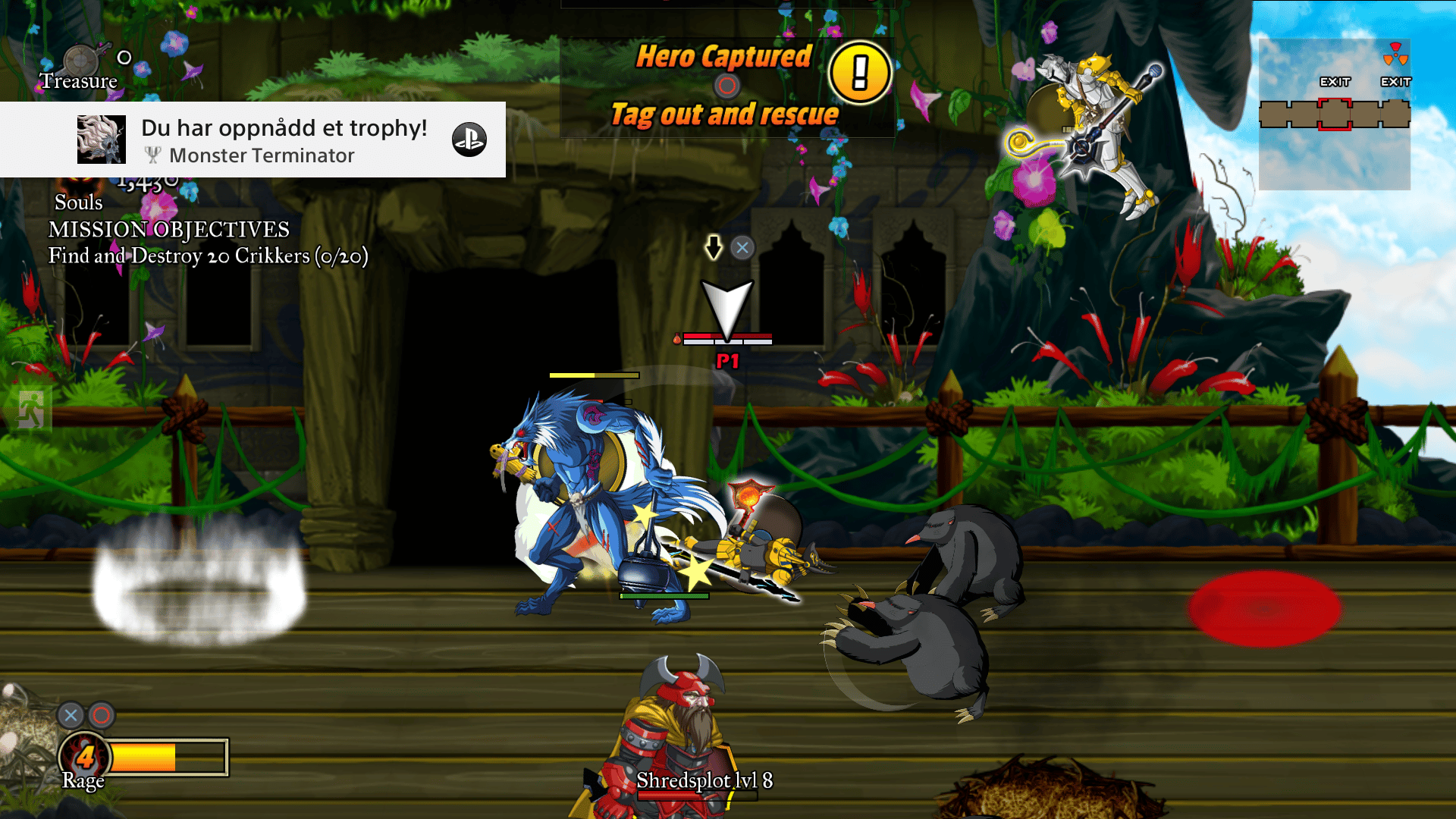 The graphics and style of everything are solid and pretty darn gobsmacking most of (if not all) the time, it’s easy to tell levels apart and the enemy design looks to be consistent with everything else in the levels.  Fluid looks and smooth animations and overall much better looking than it has to be in a game like this.

The frame rate has so far been very stable (about 8-9 hours in or so now) on both the PSVita and the PS4, i have yet to try it on the PS3 and i don’t know how that is although i am pretty sure that everything is just as good there too. 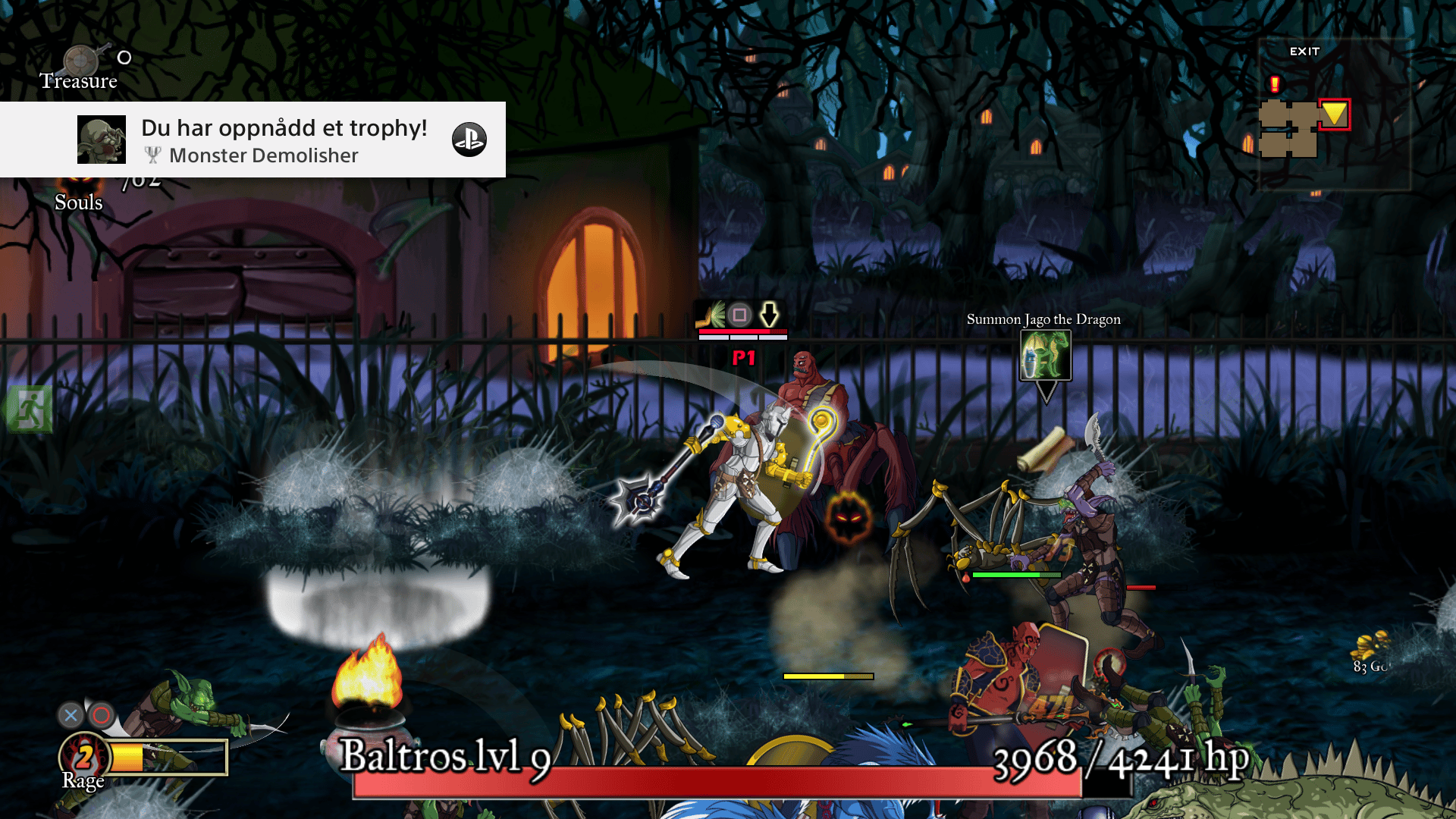 Boss fights in the game are one of those things that are kinda lacking, it never goes out of the way to try and make the player go “WOAH!” or anything like that and it is more or less like fighting a normal enemy with a little bit more health.

There ain’t any save points or such in the levels so if you die before a boss or in a boss fight (which is at the end of most levels) then you will have to replay the whole level again.

The good part with Dungeon Punk is that even if you die you will still keep all your stuff and XP from the level so if you play the level again then everything will be much easier (most of the time anyway) right away. 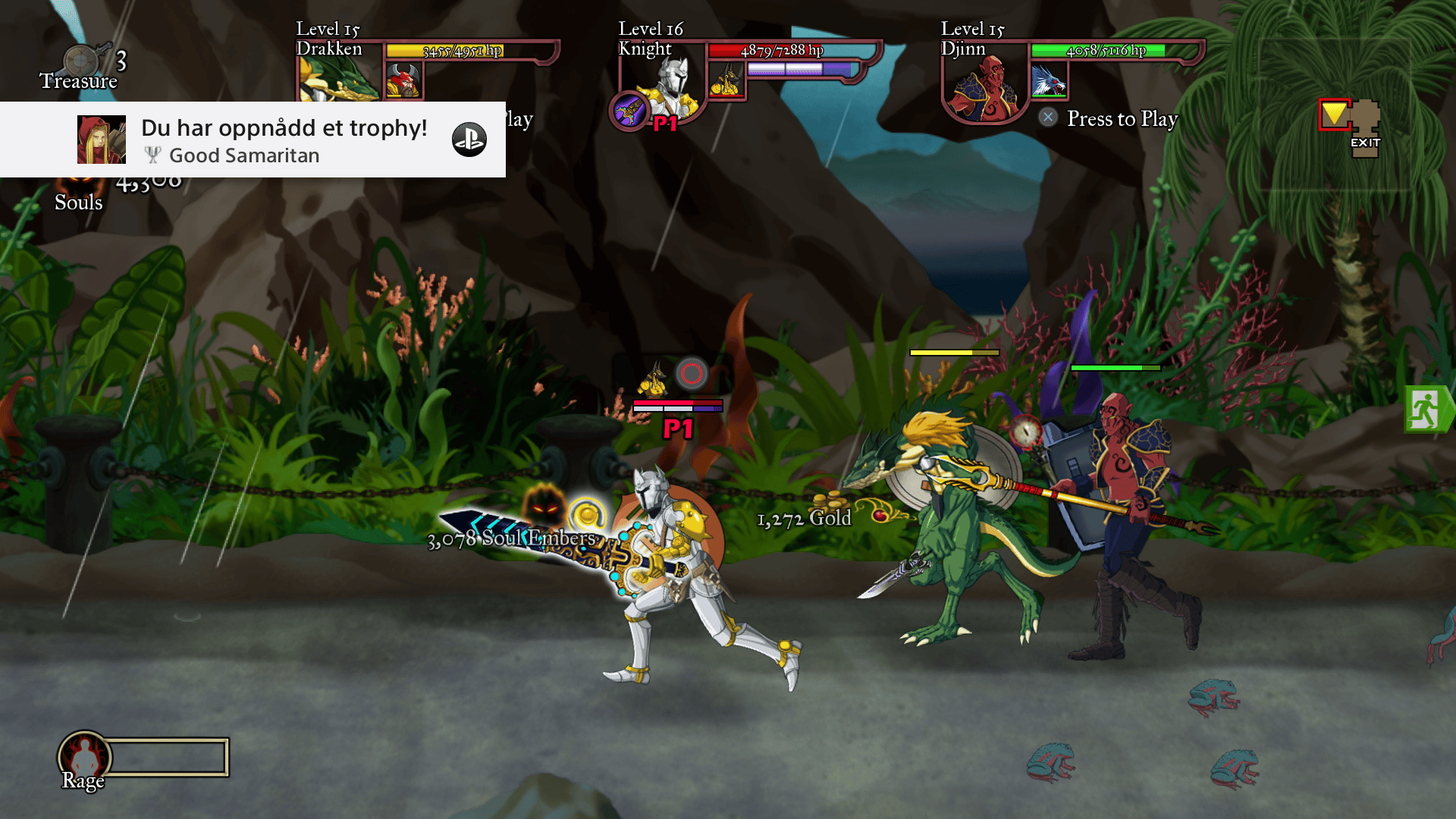 Dungeon Punks is all about levelling up and replaying earlier levels in order to stand a chance, there are the usual pickups to be found like health and such so be sure to pick those up, luckily you level up every character a little bit too even without using them as long as the CPU use them.

While levelling up you also get coins and level up points that you assign to your characters for various skills and such, there is even a shop in the hub between levels where you can sell and buy new stuff.

Everything just works, it seems they have thought about everything in the design here. 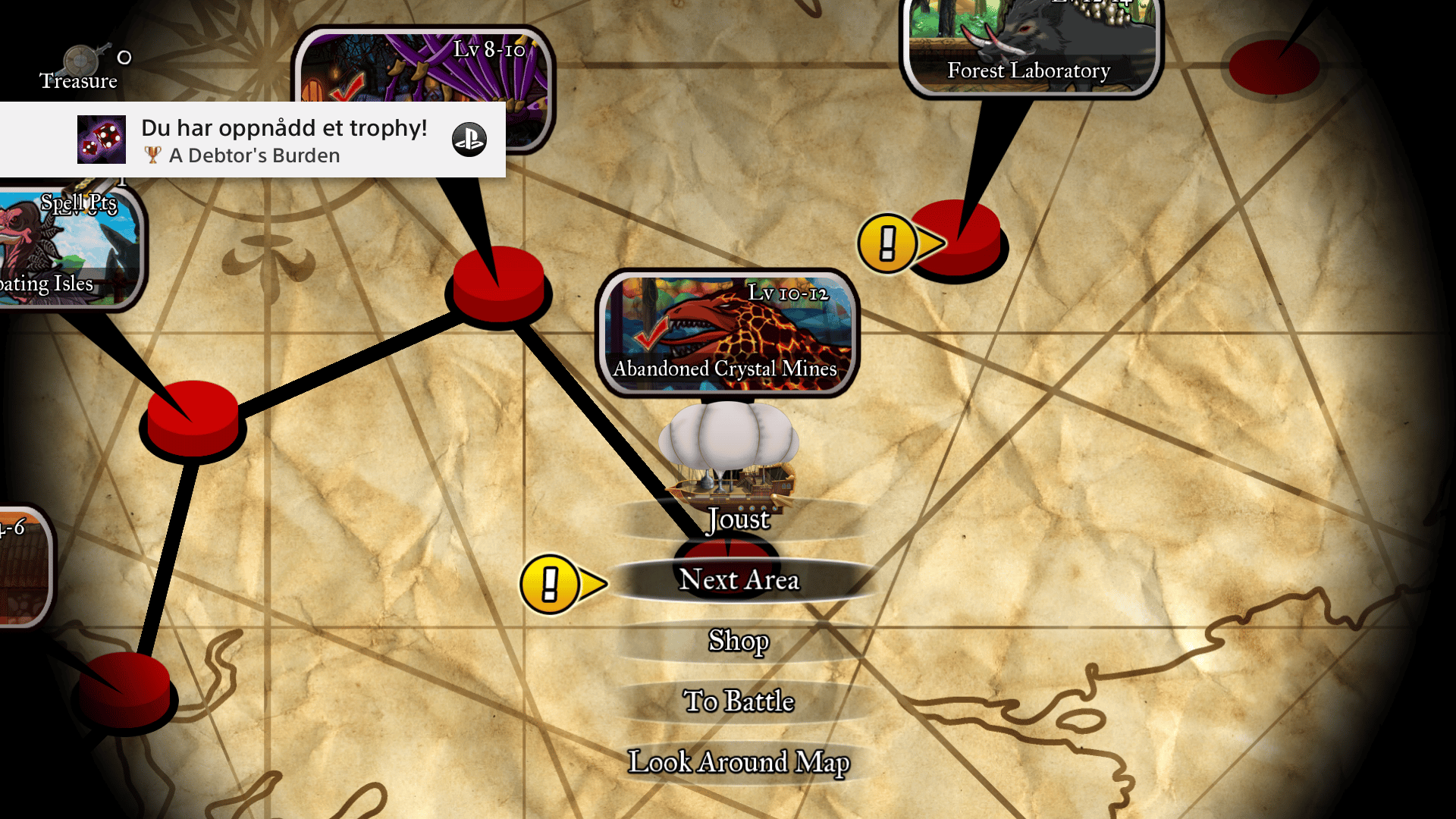 There’s a bunch of levels and each level got secret sections as well as side missions, replaying levels is easy and fun and never a hinder for the continuation of the game itself, everything is self-explanatory and a breeze to navigate.

At this time i have not completed the game yet as SKYRIM VR happened and this landed on the backburner for now, but yes i only got a level or two left before i have completed everything so i decided to push the review out anyways.

Dungeon Punks has to be one of the best Cross-Play titles in a while for certain, but it sorely misses the cross save /cloud save option to be able to continue on the go with the Vita after a PS4 session and so on, this might be patched in one day hopefully and i will send the developers a suggestion about it too.

Another issue with the game is that when you replay levels you still have to watch all the endless cutscenes/character chatting stuff still, to be quite honest here i must say that i have more or less looked away while hitting the X button while these have been going on, sorry but i feel that these things don’t belong in games like this.

Some Hints to make the game better. 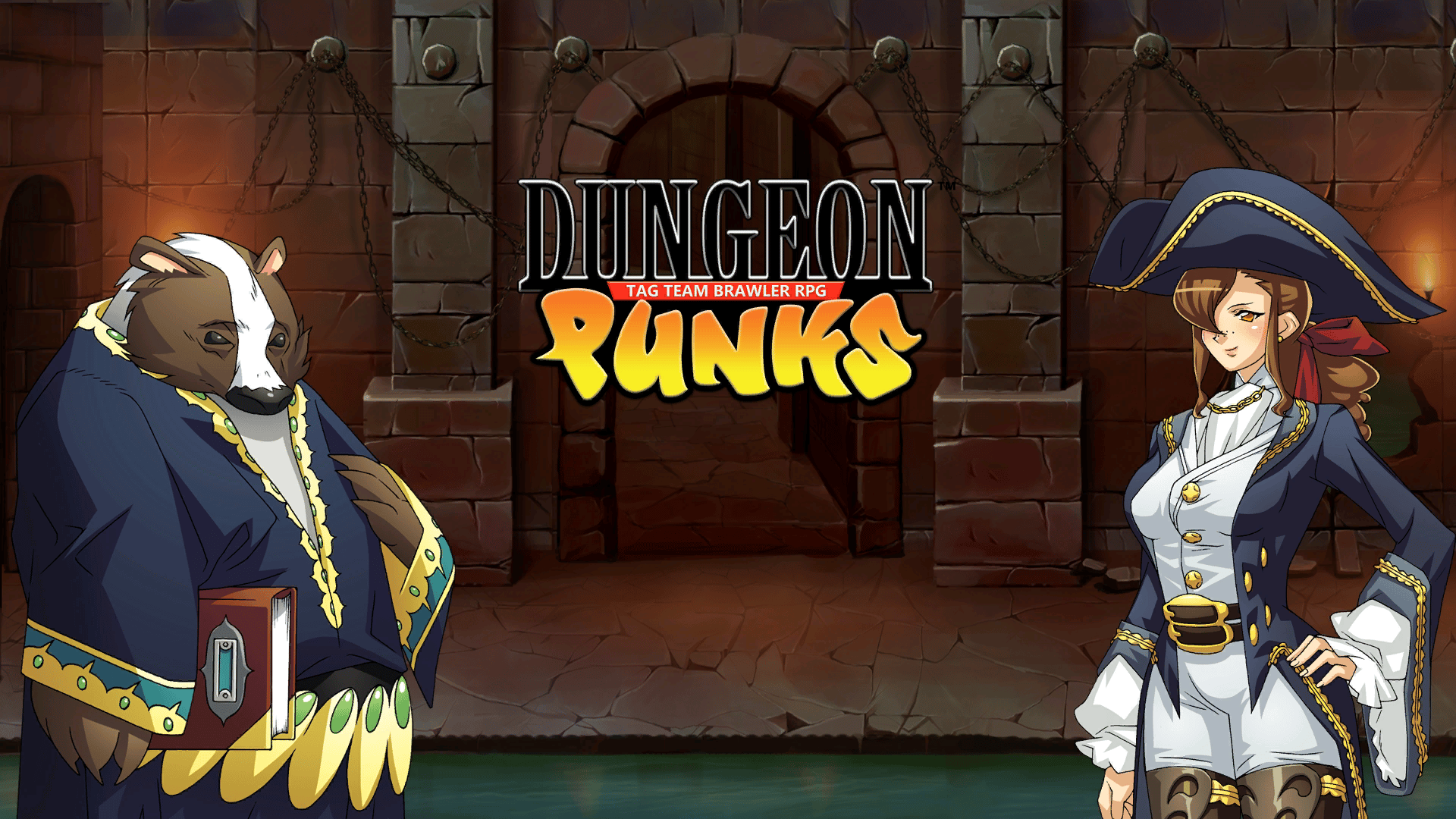 Dungeon Punks is so much better than everything else out there in this genre on the PS4 that i simply can’t recommend it enough to every old school fan out there, it may not be “all that special” to gamer’s not familiar with old beat em ups and such but it’s one of the games that everyone needs to try now before it vanishes from the PS+’s monthly game thingy.

It’s slick, colourful, with a pleasing soundtrack, easy to play, co-op and a levelling mechanic that works great for such a game.

It won’t end up as a classic i guess but a very worthwhile title for fans of the genre. You can’t go much wrong with this one really.   GO GET IT NOW!.

Follow Us... Inspire Us To Get Better... Keep The Flame Alive
Back to the Front: Solo Campaign in Star Wars Battlefront II PSVR Test: Final Fantasy XV:Monsters Of The Deep 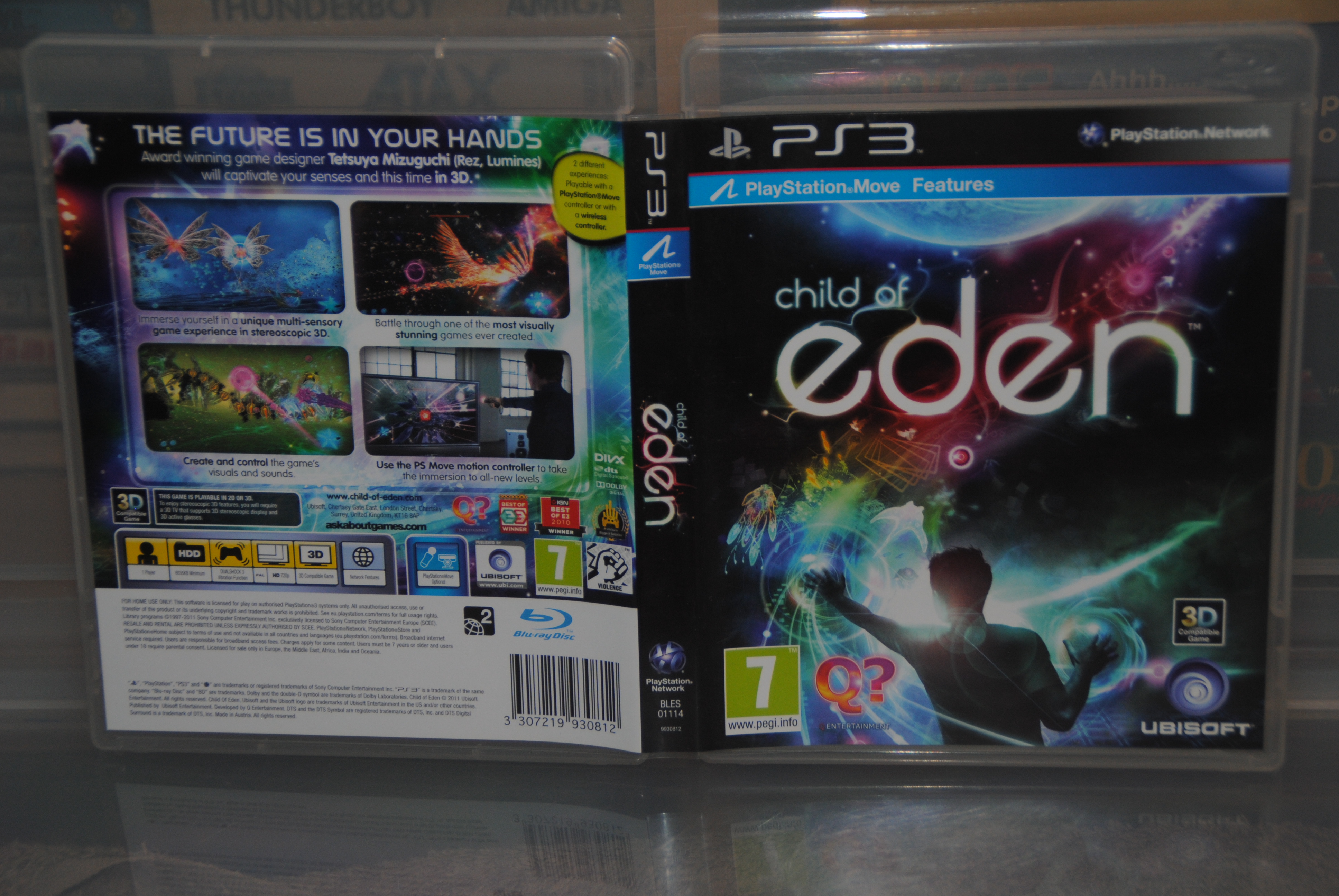