God Of War is finally here again, it’s taken years since we got God Of War Ascension and most fans of the series have waited for a new game. This new game in the series is quite different from the first games although the key features are still there, stuff like ass kicking and brutality. A review of the full game will happen once I have completed it, that said, so far it’s one of the best games I have ever played, the fighting and the graphics and sound is beyond my expectations by a mile…

Over to the unboxing then, I have both versions of the EU collectables and I have done quite a few pictures of them too, enjoy. 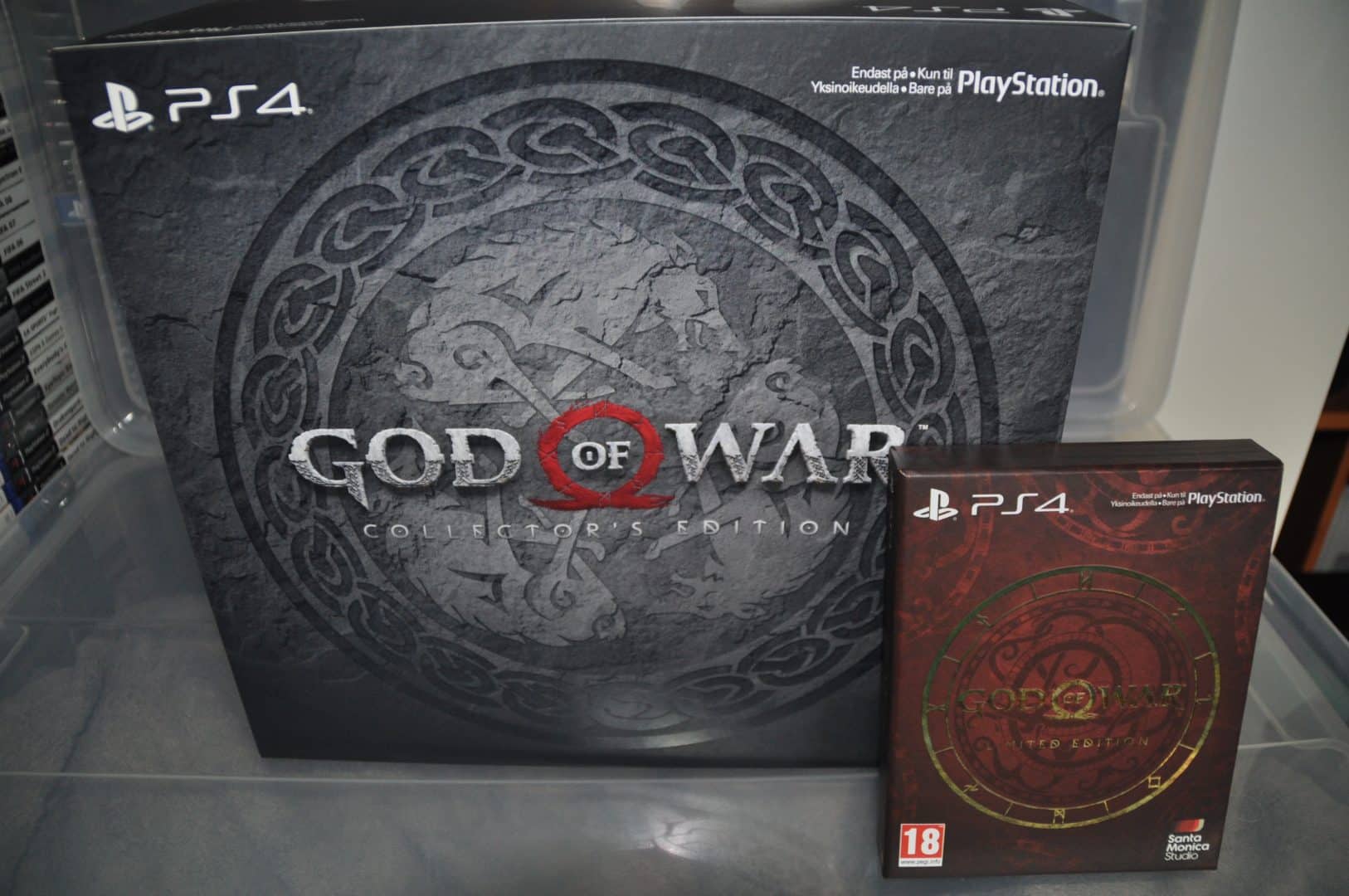 This is the top side of the C.E box and like everything else in the box.it look amazing. The L.E box is also in the shot, the focus was bad on the first one I made.

The colours and print quality is awesome, looks extremely good on the shelf too, a proper centrepiece much like the two other collector’s editions I have (God Of War III C.E and God Of War Ascension C.E). 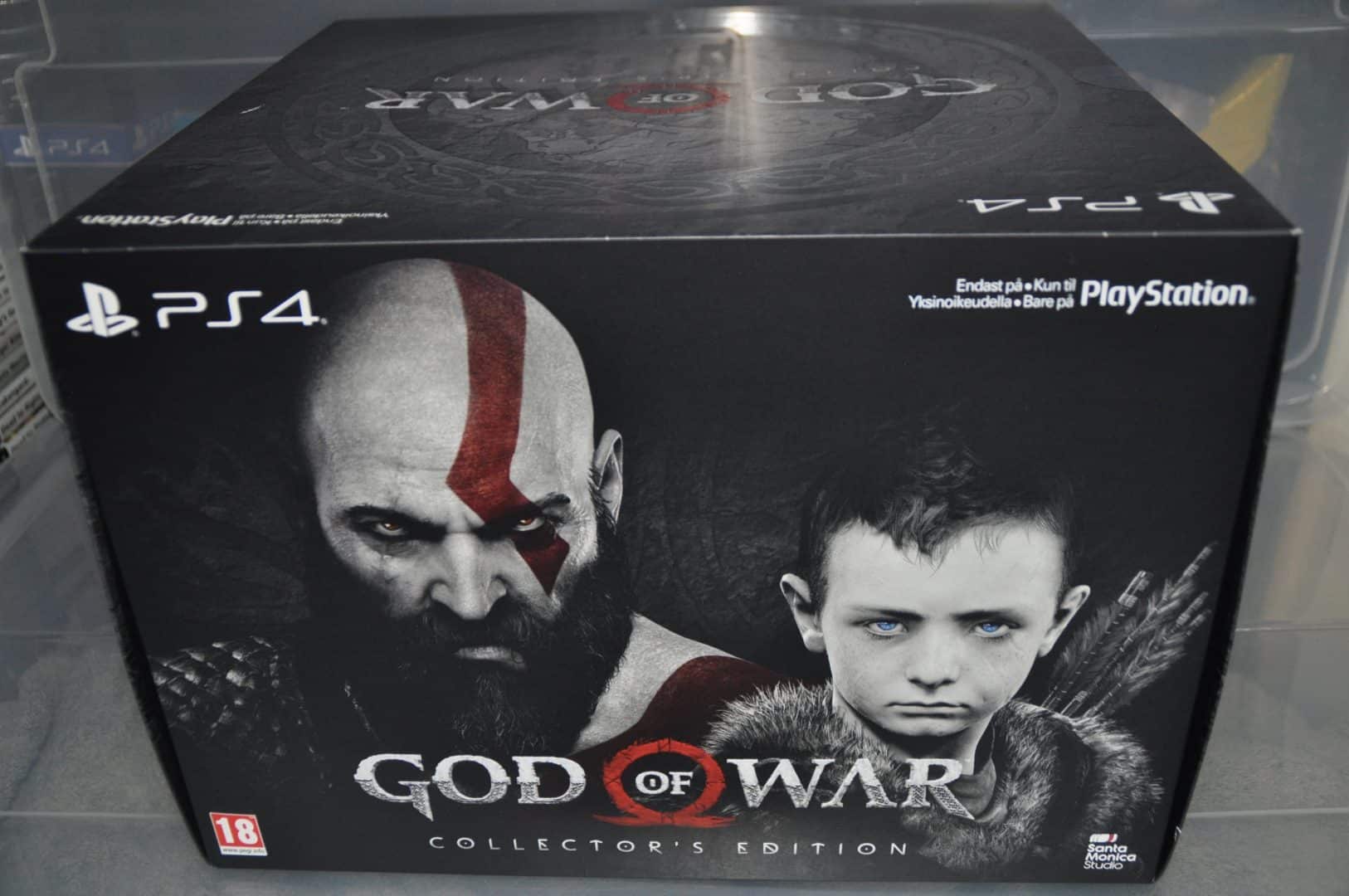 This is the front of the box, absolutely amazing looking, brilliant style and those colours are beyond anything else I have seen on a C.E before.

Sony and Santa Monica Studios have done an amazing job here to make one awesome box. 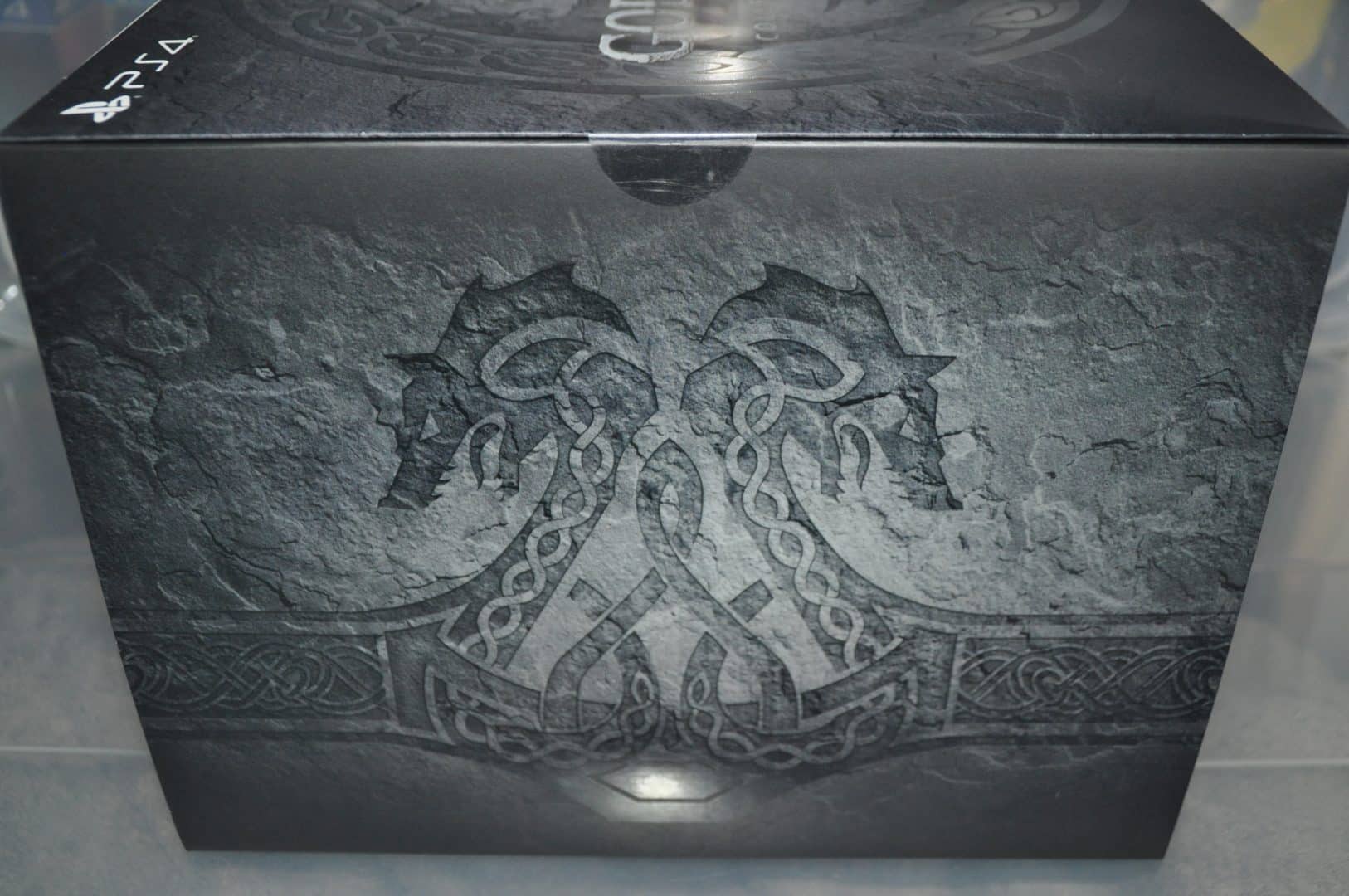 The sides of the box got this awesome looking art on it, not much to say except for that they look even better in real life. 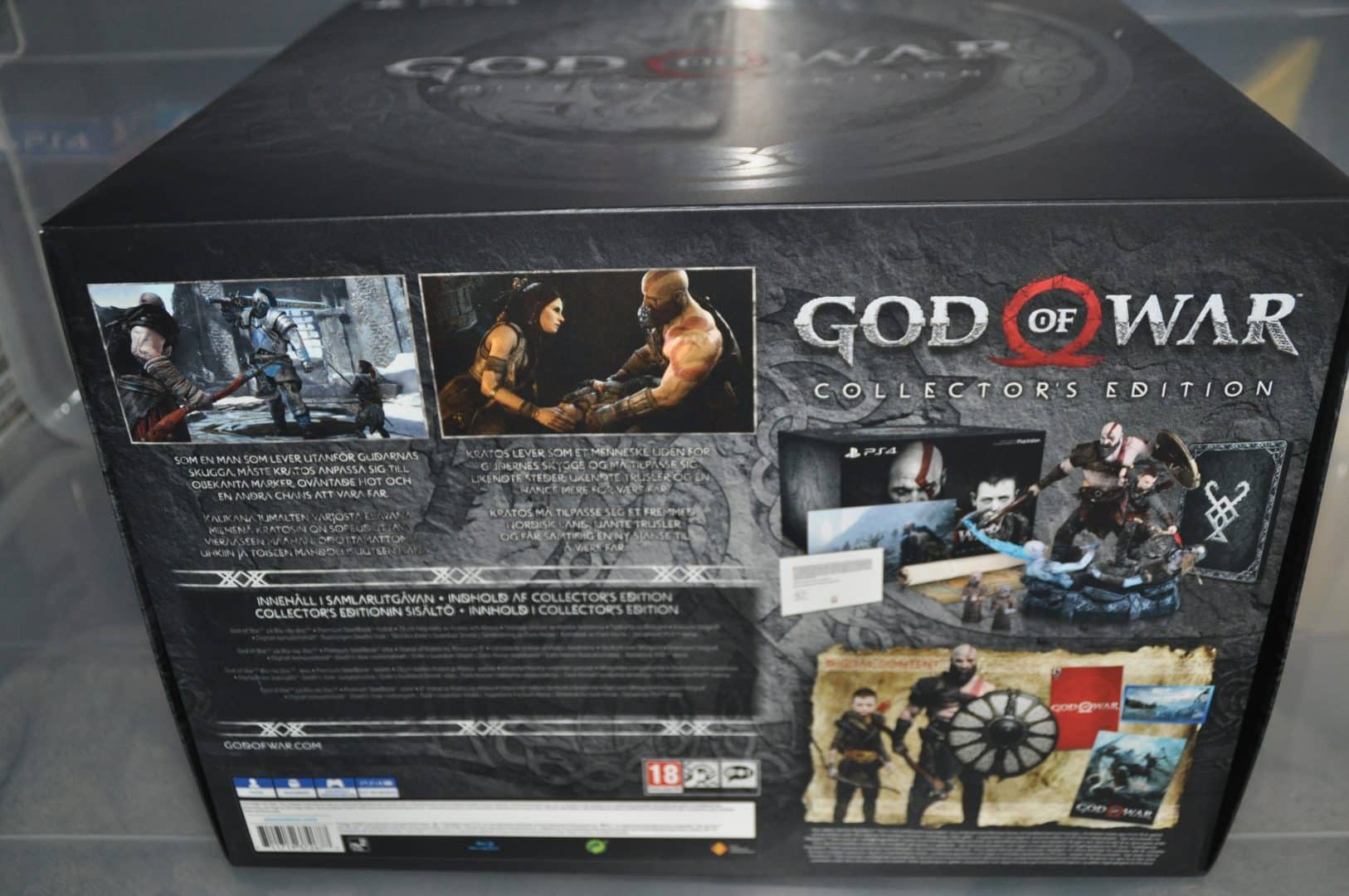 Just when you thought that the box wouldn’t look any better comes the back side, it seriously kicks ass, really good looking and once I saw this I wanted to fire up the game immediately.

All the details are in place, anyways, time to check what’s inside of it… 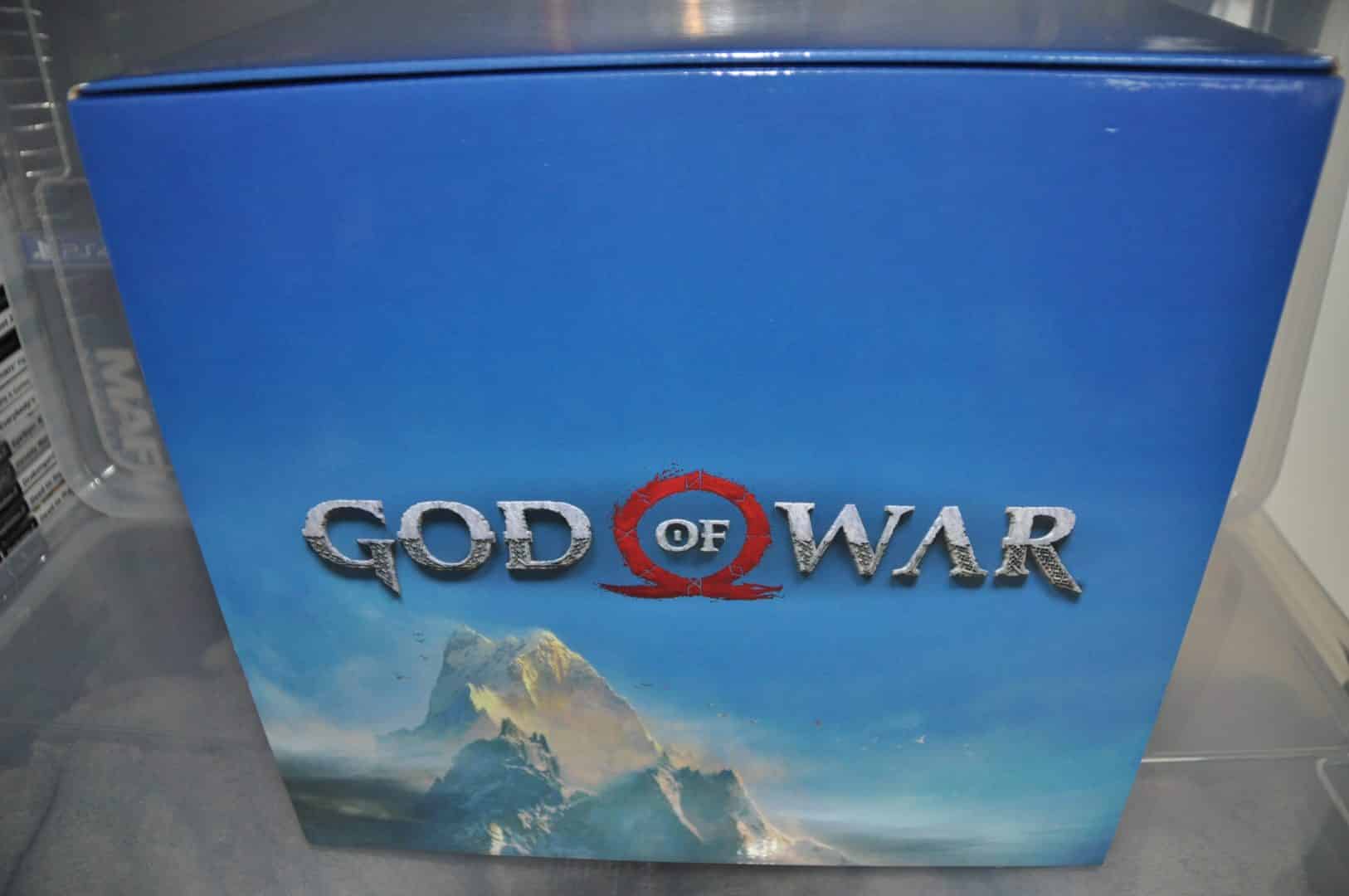 Oh, there’s another box inside just like Horizon: Zero Dawn got, the colours are quite the same too, a lovely blue box which looks amazing to say it in a nice way (i want to use the F… word here but I try to be “PG correct” here 😉 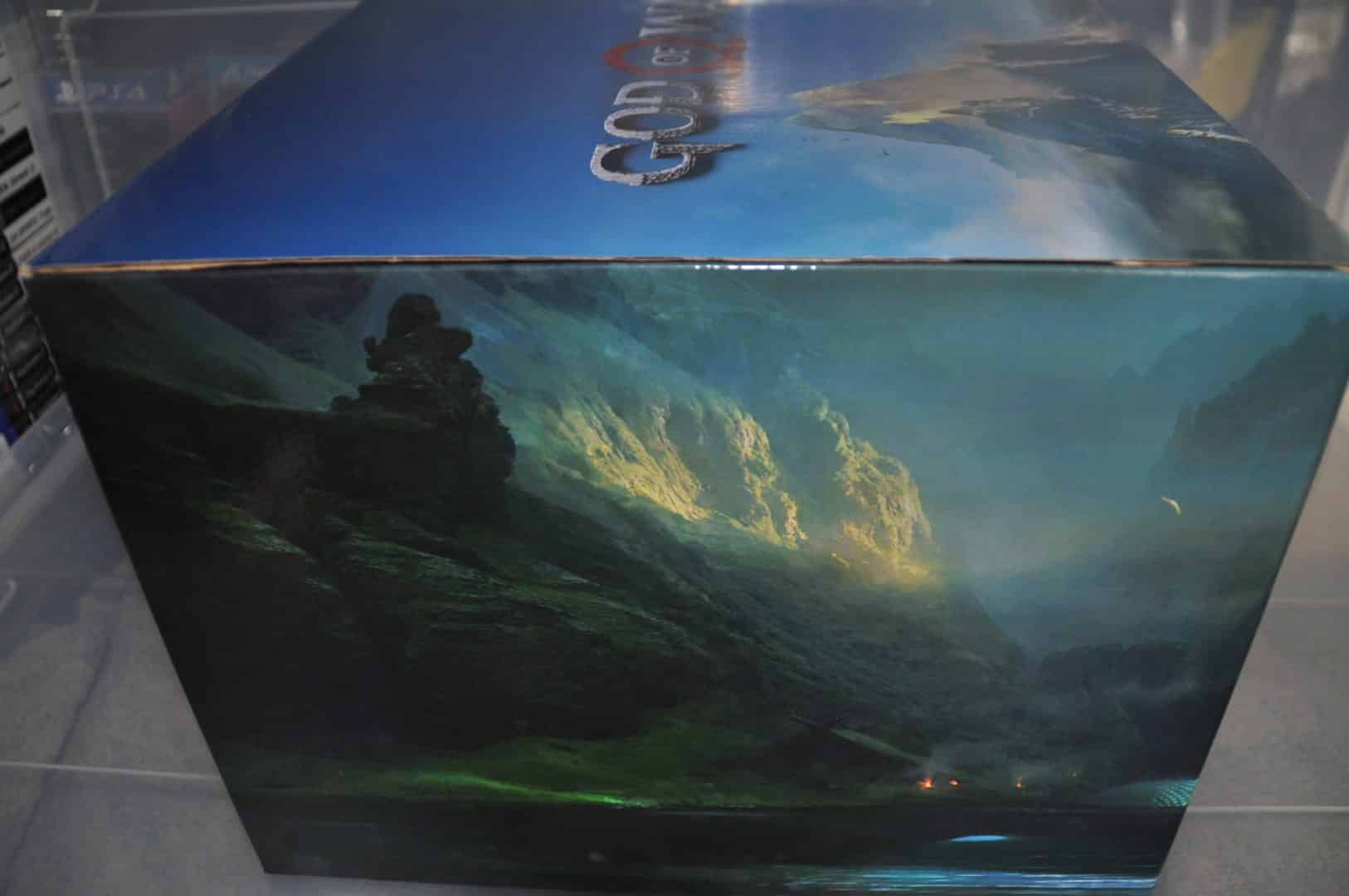 This is the side art, it looks very “Norwegian” if you ask me, a huge valley with all sorts of nice touches and details.

There’s missing one side here, the back side!. The reason for this was that the picture I took was out of focus, I will add a new one in A.S.A.P…

Once you open the blue box you get to see the Steelbook and some text on the sides of the box, really cool design and a nice touch.

The Steelbook is pretty awesome too, more about that later on in the article. 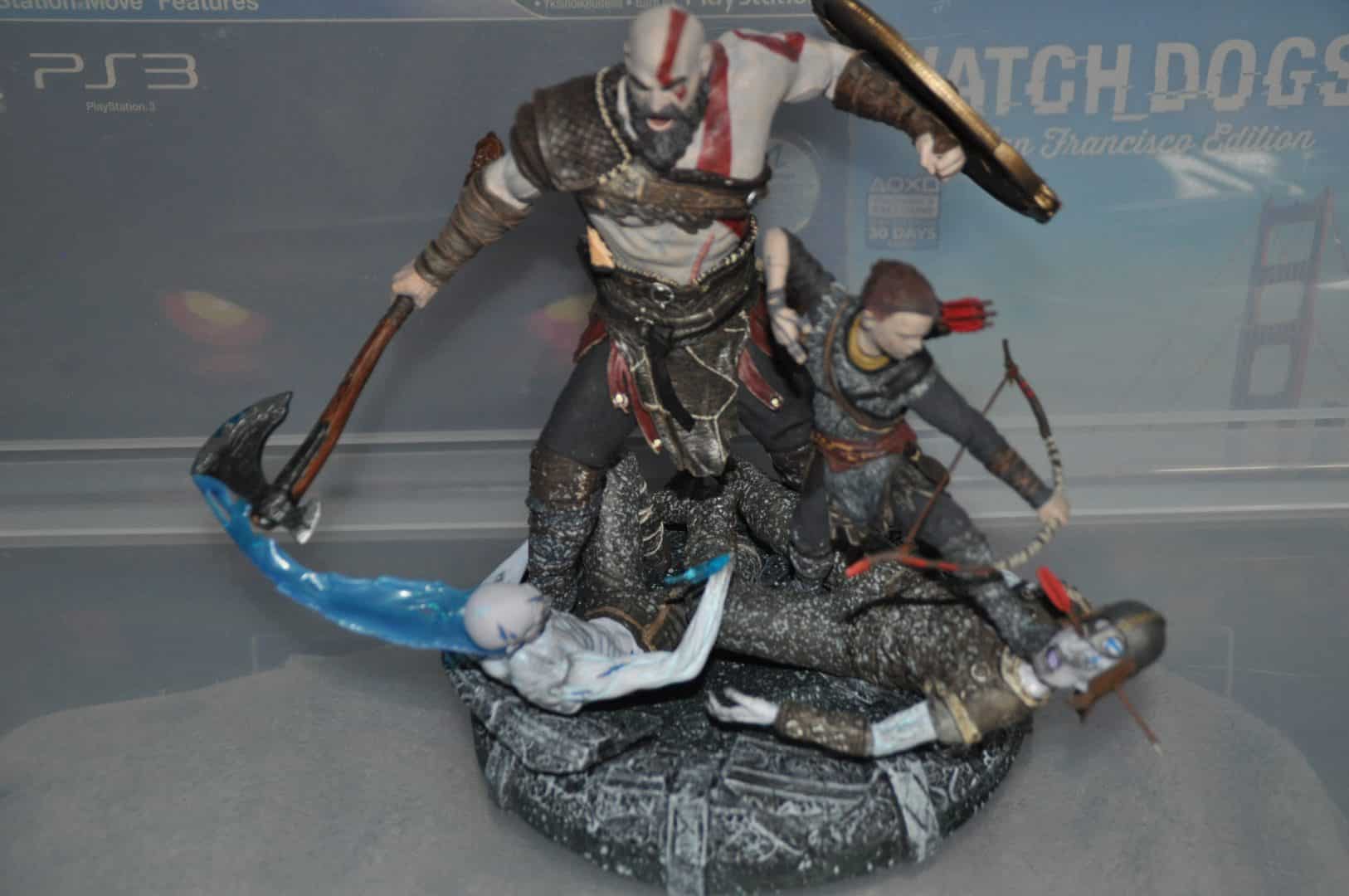 The figurine in the box is huge, loads of awesome details in it and I have to say that this is the best one so far from SONY, the details are in place and unlike Horizon and Uncharted 4 Collector’s edition’s, the facial details are in line with how it looks in the game.

I did a gazillion pictures of the figurine but I decided that it was too much for the article, anyway’s as you can see there is still loads here to see. Check the details everywhere, the skeleton lying on the ground is brilliant but the best of it all is the dude in armour who has an arrow through is eye and skull, brilliant touch!.

There are also two smaller figurines included in the box, these are really heavy for its size and looks rather cool with tons of tiny details everywhere.

There’s only one Artcard included in this collection, thankfully it is fantastic looking and really good to set the mood for how the game feels and looks.

The quality of the print and the paper used is really good and feels like a quality item. 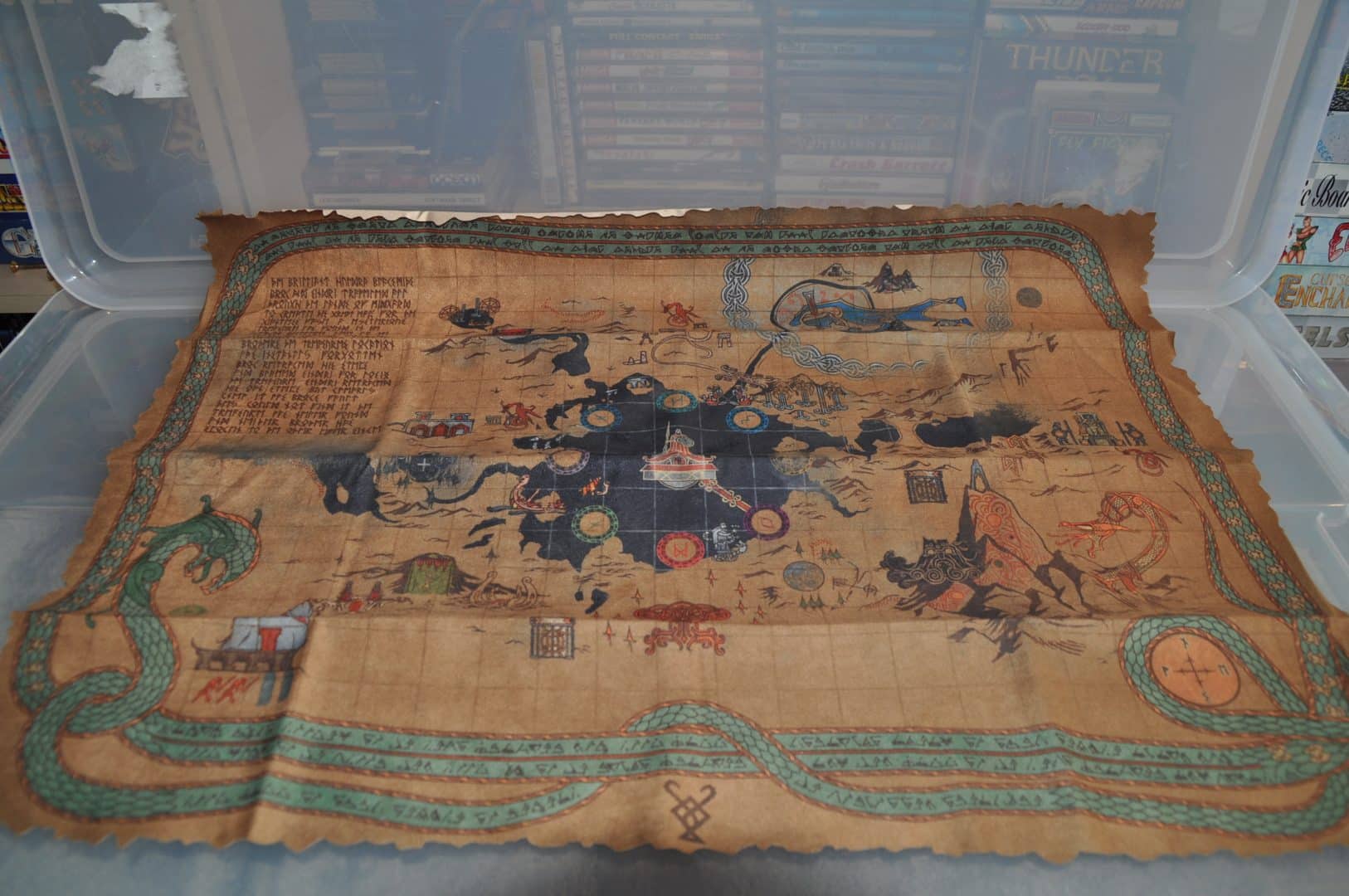 There’s a map included too, and it’s not made of paper or whatever, it’s of proper “cloth” material and look and feels really good, the quality used is one of the best I have ever seen in a box like this. 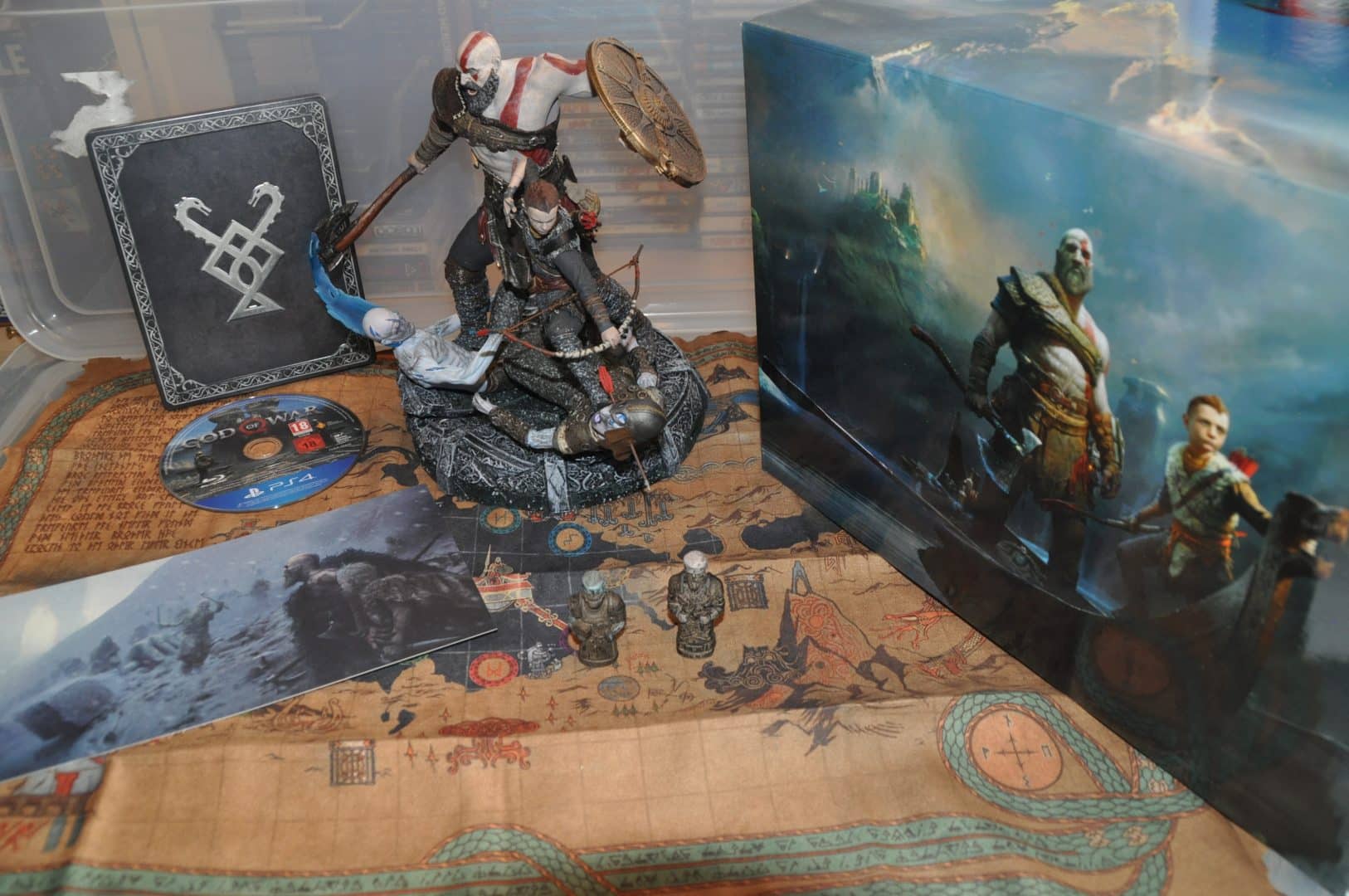 This is it then, not an insane amount of goodies but what’s in it is of fantastic quality and well worth all collectors money, the blue picture of the boat was missing in the article, it was too unfocused and I will edit it in (in perfect condition) later on when I get the time.

Ok then, now over to the Limited Edition, I only took a few good pictures of it but I will do more of the artbook tomorrow hopefully, so check in then for everything. 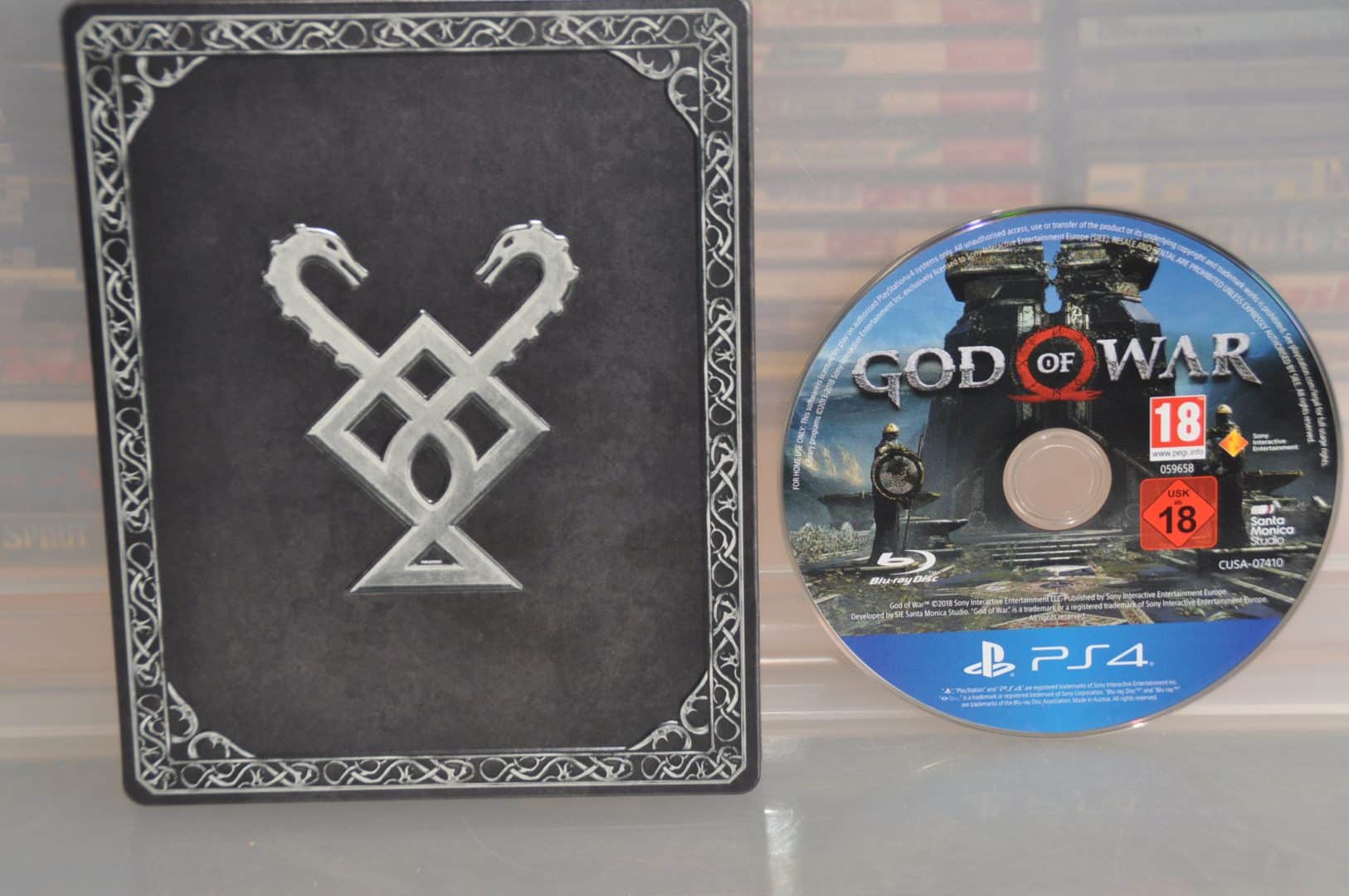 The steel book and Blu-Ray are identical to the Collector’s Edition one.

Good looking disc and steel book, a pride on the shelf for sure. 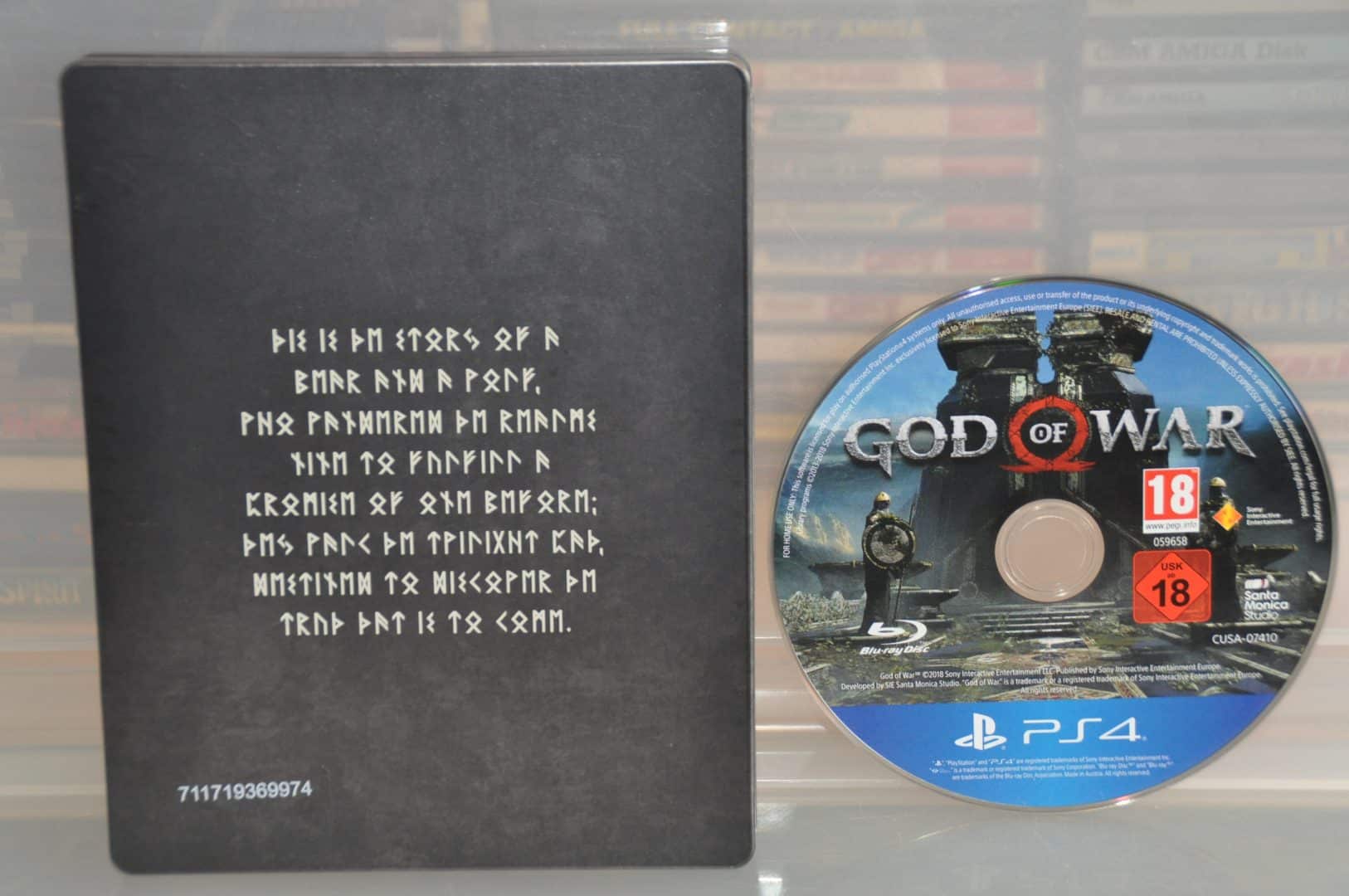 The backside of the Steelbook got the same text as the C.E’s box inside signature, really cool design and I love the font that is used here. 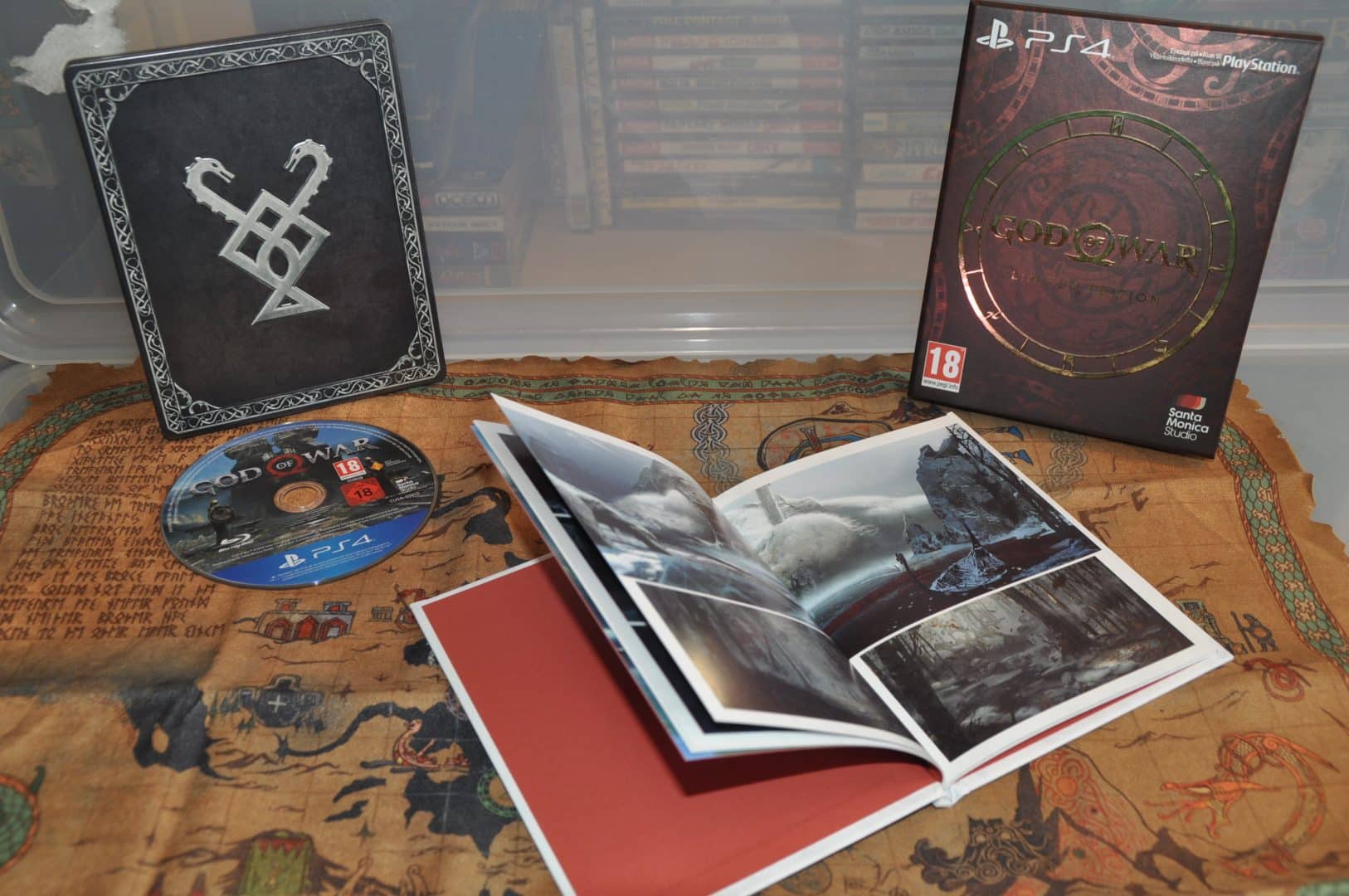 This is all that is inside the Limited Edition of God Of War, not all that much but looks at that Artbook!, I have to wonder why there wasn’t one in the Collector’s Edition, but I guess it was down to the price of the box.  The Map that’s underneath it all there was not in the box and I wonder why I forgot to remove it before doing the picture.

Anyways I will do more pictures and post em in here tomorrow, the artbook is the small A5 one that Sony has used in several games by now, the print quality is good and there’s a lot of pages for such a tiny book. I give this one a lower score due to the amount of stuff inside, it’s good but not perfect even though the brown L.E box certainly is good looking.