You’ve heard the name, you might have used it, maybe you’re already using it without knowing it? or maybe it’s like with me – I use it because I love the idea -, yep the rant today is regarding CLOUD gaming.

Cloud Gaming is not a new thing as it’s been going “on” for a long time on PC and various games too as well as storage spaces like MegaUpload and such.

I won’t dwell too much on the MegaUpload scandal but I will just mention it as a reference to “What Could Happen To Your Data“.

Ok so here goes, I lost my family photos (some important ones and some not so much..) back in 2009 because my Launch day PS3 decided to die with a YLOD on me and while I am an active backup guy, well i forgot about them for some reason and when the unit died..well i lost stuff I didn’t know I only had stored there.

From that day I decided that I will use Online storage (web hotel etc) and removable media (USB Sticks/HDDs etc) and store them locally on a unit for regular viewing and since that day I have been living in the cloud, what a wonderful place it is!… or is it?.

If it’s one thing YOU must be aware of that has to be the fact that online services go down daily, major online storage spaces corrupt data and several terabytes a day is lost and if one counts the Megaupload shutdown then you may add ultra terra mega terra super terabyte.
So, yes your data ain’t 100% safe so don’t rely 100% on it and if you want to store data online (you should!) then try and use 2 different ones just to be 100% sure if the data is really important, sadly this is not possible with all kinds of data…which brings me to this very rant..

Last weekend Defiance (yes..again I mention this game..) decided to DELETE my character/reset my account for an unknown reason and all I was welcomed with when starting the game was a “link account” message and the general “create character” as if it was my first day using the game.

I must have restarted the ps3 20 times and looking for my savegame on the hard drive and on my USB stick and on the PSN cloud, nope it was gone, I was sweating like crazy, I almost had an anxiety attack, seriously.. I felt really sick!… just for a crappy game and its save…
I went online and started browsing forums and such, no reports had come in yet.. it looked like it was the only one with this glitch or whatever and all I found was some reports about a critical crash or whatever but that one didn’t delete save games or whatever.

So then into the game and started sending ” HELP!!!!!!!!!” blah blah with all info to the help desk in-game, I must have sent like 20 on Sunday alone… no answers, not even a confirmation of that I had filed a report.

I sent more on Monday… nothing…

I sent more on Tuesday…. nothing yet…

On Tuesday evening I went to the forums and asked for more help and that was when I was guided to the trion helpline on the web, both live chat and a proper report ticket system.

I rushed to the live chat place and was presented with no chat window but with a message that I had to have a certain level /status to use the god damn thing… WTF? ..must be a first for everything I guess… 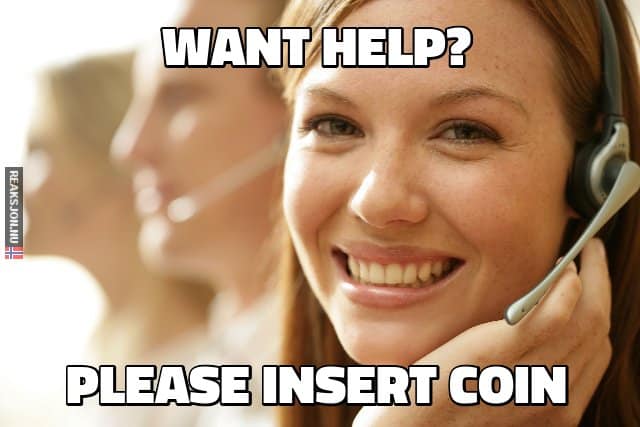 Ok, customer support costs money? bought my game? , pay me more to learn how to play it!

anyways, I went on to the ticket service system, phewww! it didn’t cost money! but it looked like the very same one as the one game… uh-oh! UH-OH!… anyways I typed in the report and what had happened… I didn’t expect much, to be honest as 3 days had passed now…
I got an email a few seconds right after I had submitted the report, it was a confirmation that they had received my report!, YES!!!!!!!!! mission 1 completed, this was the first life sign I had got from them.

Hours went, nothing… I went to bed and when I woke up… still nothing… but a few hours later I got like 30+ emails from TRION customer support, OMG!, all emails were about my report and how it was already fixed so when I found the first mail from them, yup they fixed it right away!. Yahoo!.

The save was stored on their server all the time, no data whatsoever on my side, I had no way of backing it up, what a stupid solution but I guess it is to prevent hacking but I was offline in the game for several days and it was double XP (more actually) days so it pissed me off quite a bit but the nasty part here is that customer support for such a game was slow and the in-game report system seems to be broken.

take my advice guys, a cloud is great but not when it’s forced upon you and you should always keep a backup of a backup as one day you will end up losing all your data if you ain’t taking precautions like this.