This is my first Commodore 64 article in a long time now and that for a reason I guess as I focus on the Amiga these days, I decided to dip into the world of calendars (LOL) last year with the 2019 Amiga calendar and yes I wrote about both that and next years one too and thanks to those I decided to go for a C64 one too now just for fun.

I’ll just copy and paste this section here from my earlier Calendar reviews from the same author.

The C64 Reloaded Calendar is such a creation, Martin C Grundy (@C64Reloaded on Twitter) ran a twitter and facebook pre-order thing a few weeks back and luckily I managed to snag one of these calendars before it was too late.

More info about prices and such at the end of the article. 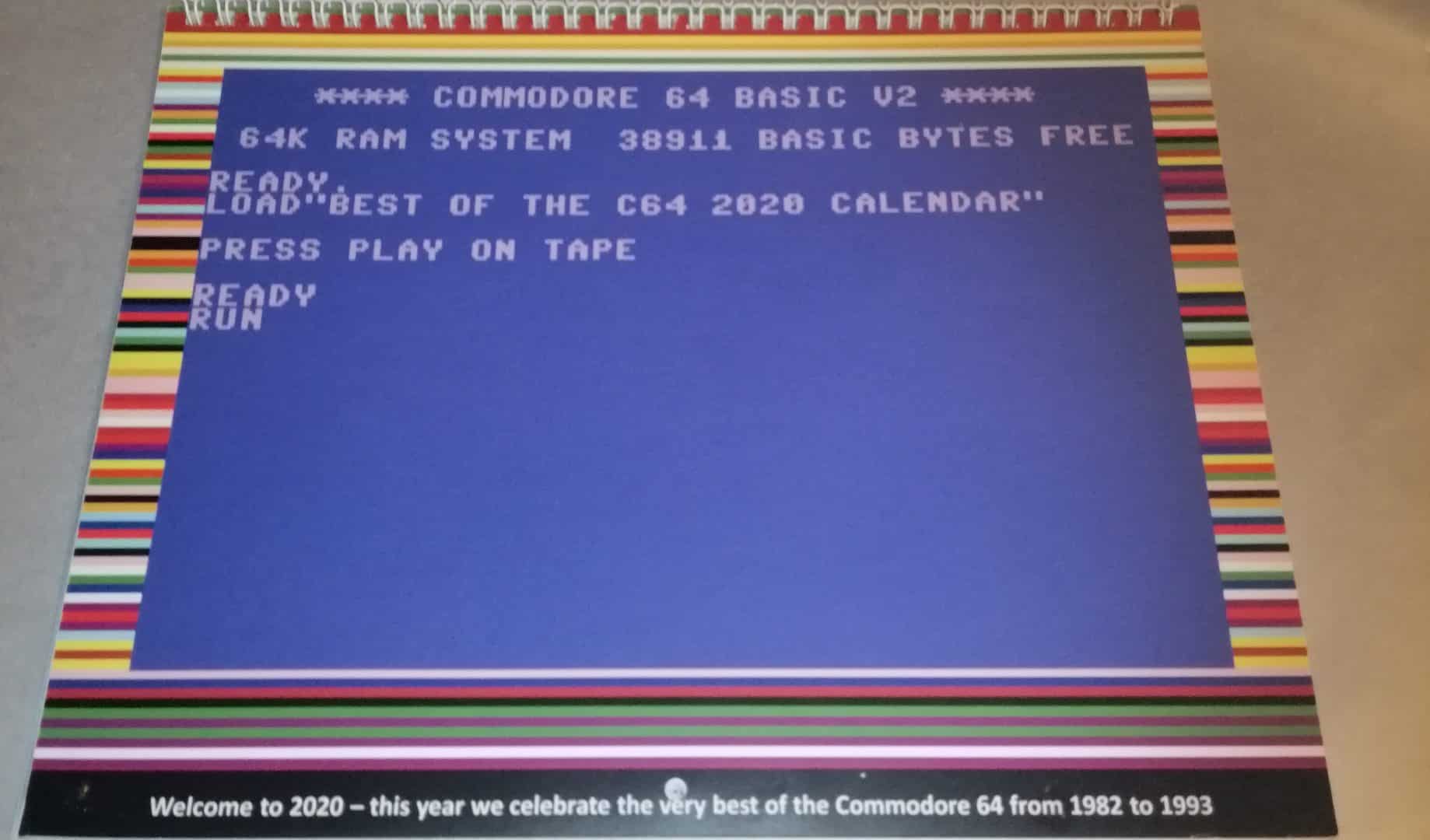 Same author (Martin Grundy), same excellent quality but the twist with the C64 calendar is that it spans 11 years of games instead of a 30 year retrospective only like the Amiga calendar, this means that C64 calendar shows games from 1982 to 1993 and the game showed was released in the same month as the one shown for the actual 2020 calendar, this means that it is very hard to do one that will please everybody out there but it certainly works as a retrospective calendar and to some (like me) it will scratch a certain itch. 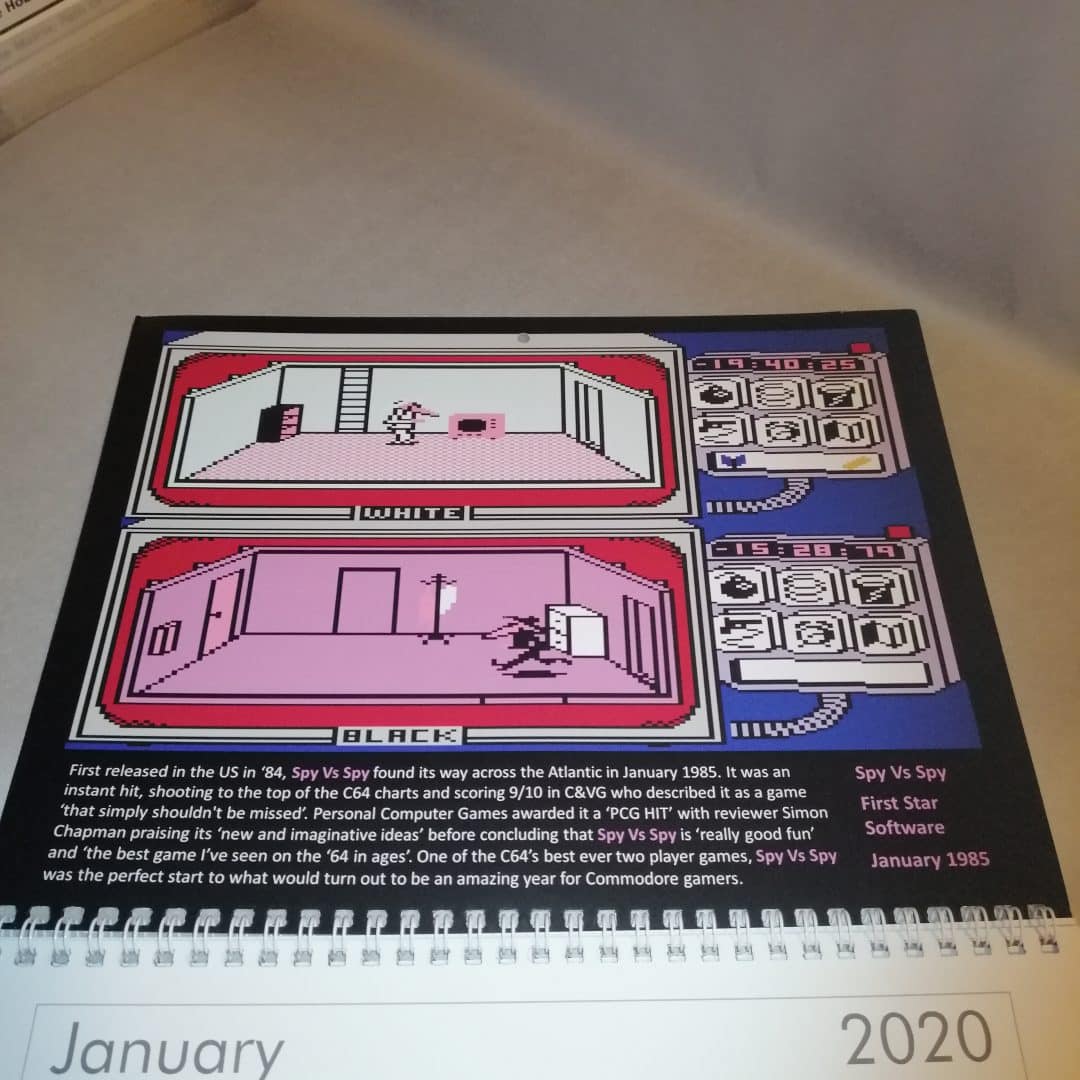 The 2020 Calendar kicks off with a bang with First Star Software’s game Spy Vs Spy from 1985, this was one of my first ever Co-Op or Vs games that I actually got so Mad (sic..) that I just wanted to punch the guys playing with me (normally my brother), a brilliant game and one of the first of its kind for sure. A game that every retro gamer out there should try.

Spy Vs Spy launched in January 1985 in England to much praise. 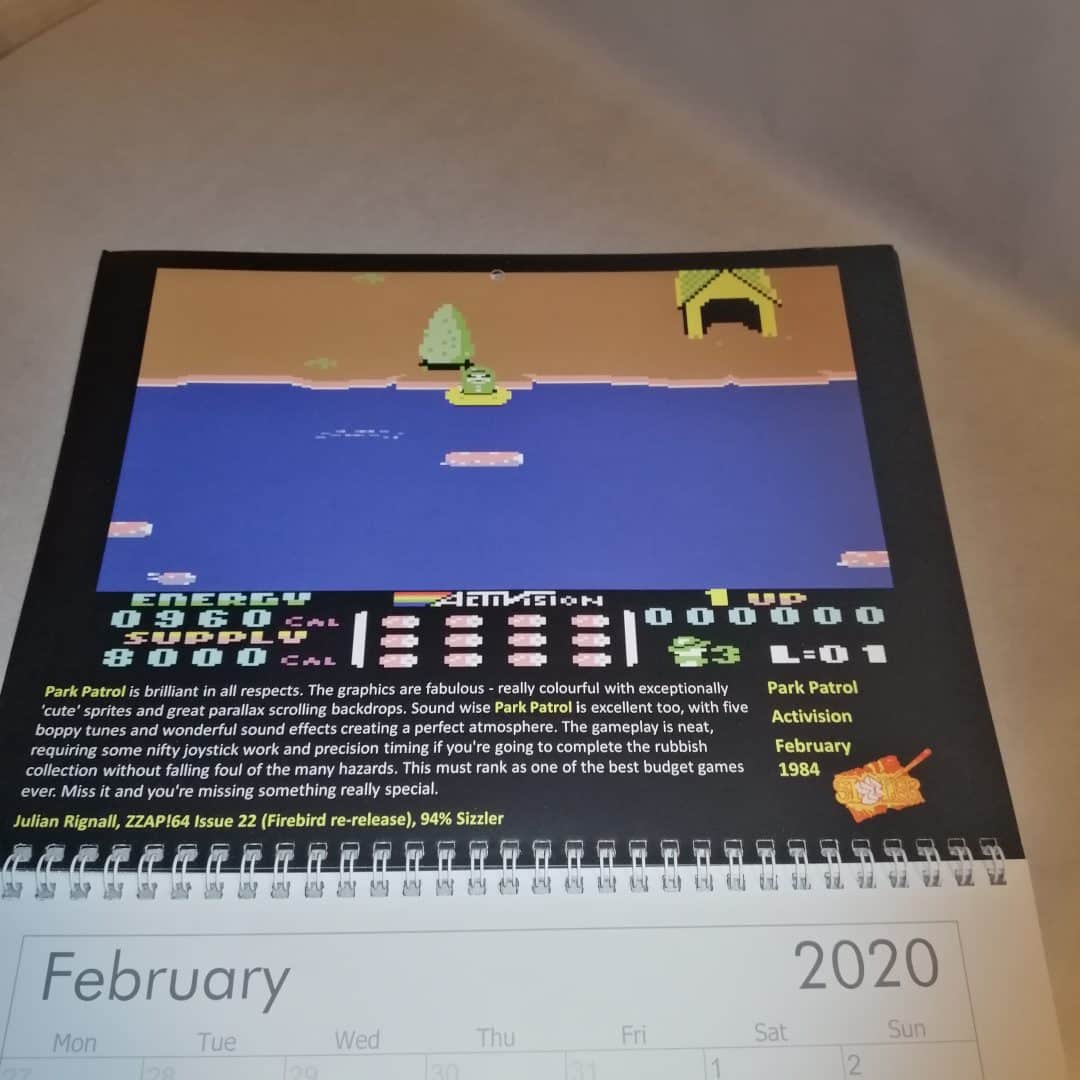 The February game ain’t any worse and to me, Park Patrol is one of the best Commodore 64 games ever made, I recall the first time I saw this game at a friends house and I remember how upset I got when he didn’t want to loan it to me or even let me copy the game. It all ended up with me running home (i was 8 years old) crying and literally begging my mom and dad to buy the game for me. I still remember what it costed (4.99) and it was me and my brother that went to the shop and bought it. One of the best memories of the early C64 days for me, only beaten by the day we got Ninja 2 a few years later.

Park Patrol by Activision was released in February 1984 to much praise and even though it was a budget game from the get-go they even went out and did another “budget budget” version a year or so later which was priced at a low 1.99 If I Remember Correctly. 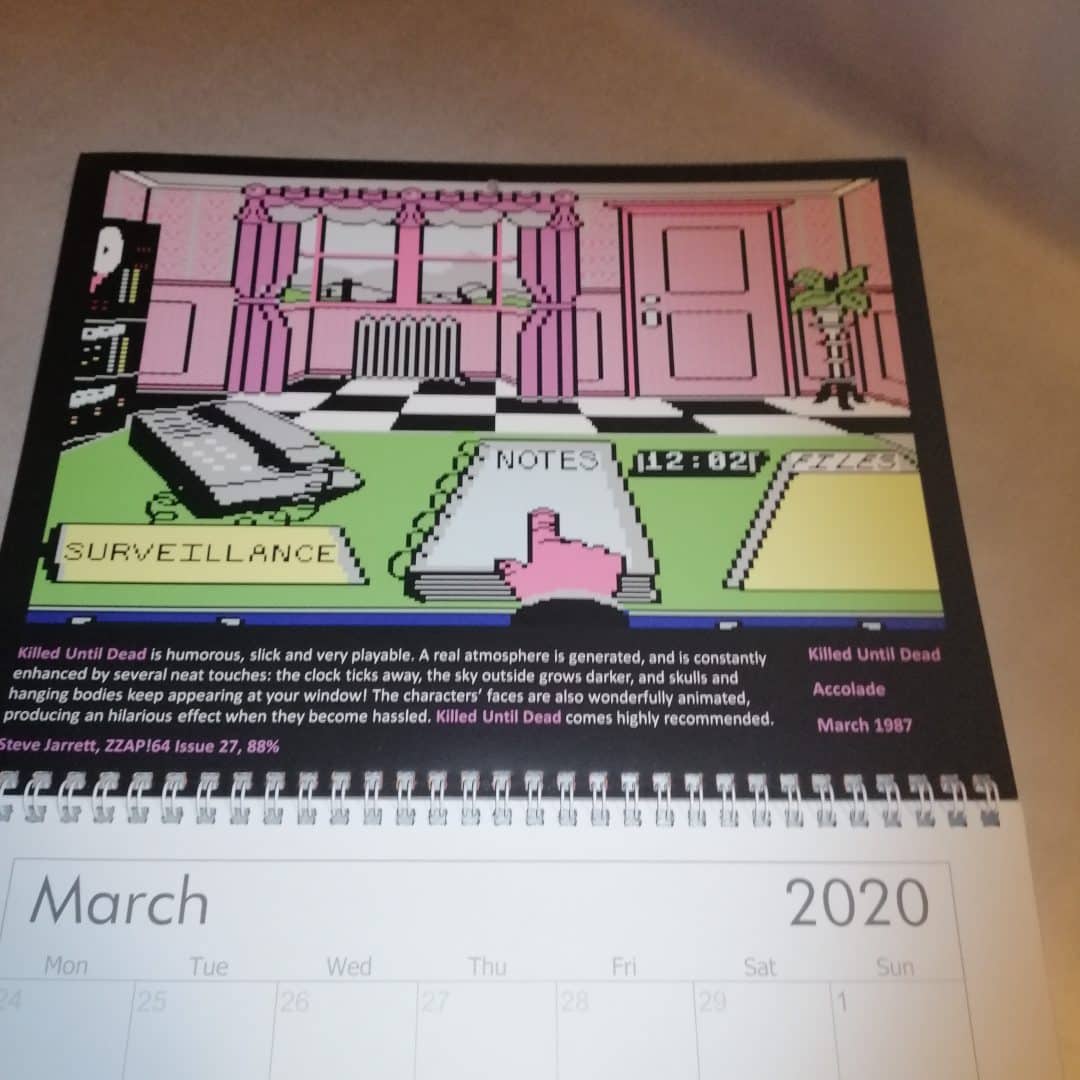 The March game Killed Until Dead game is actually a game that I have played very little and this is most likely down to the fact that it wasn’t exactly the typical game a 10-year-old would play and by the time I would have understood its gameplay and story…Well, I had moved on to the Amiga by then.

Killed Until Dead came out in March 1987 and is a proper classic and I will try it again on my C64mini this Christmas for sure. 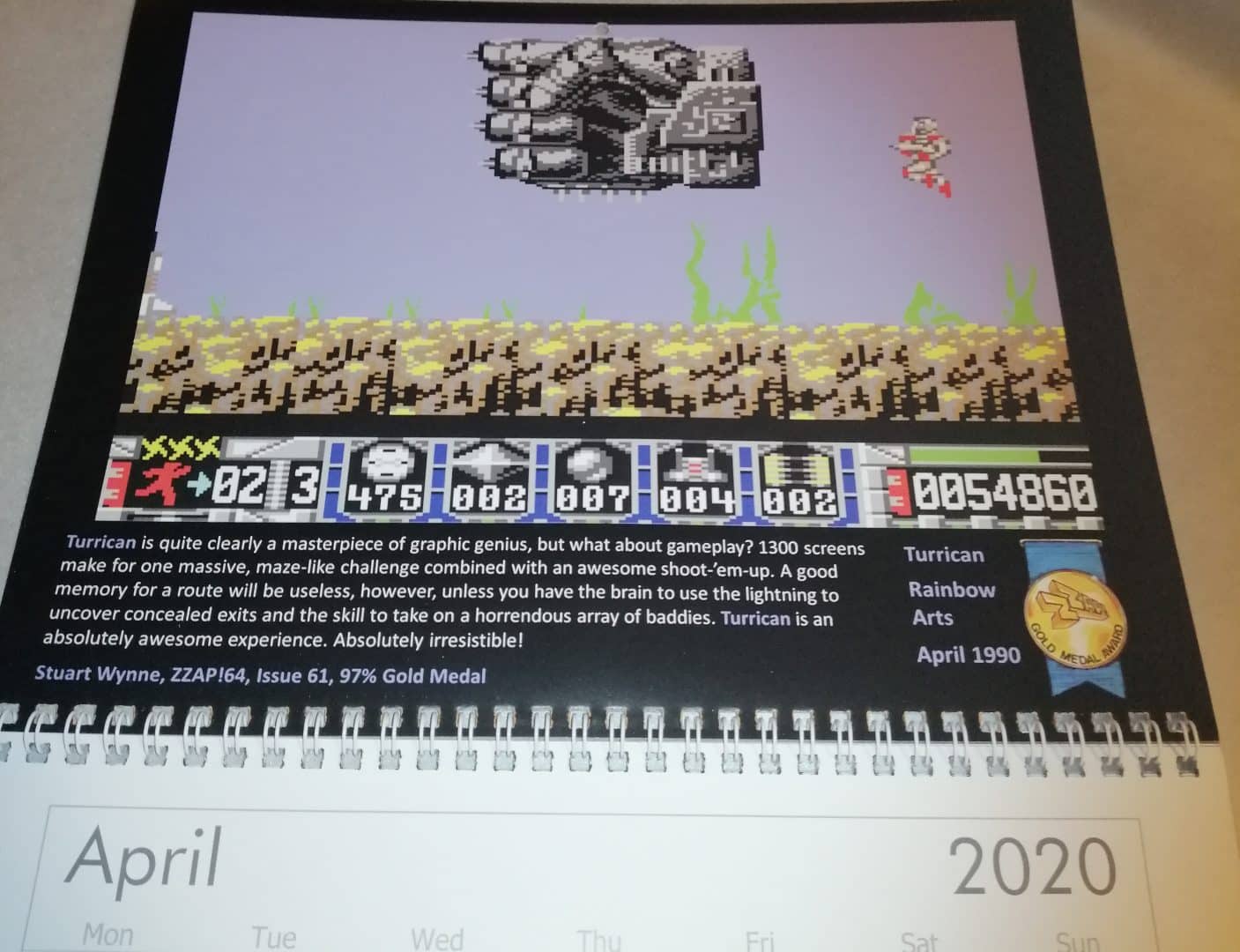 The April Game is no less than Factor 5’s Turrican, It came out in April 1990 and I had moved over to the Amiga a long time ago but it was one of those games that I just had to play anyway and to this date, I still think both the Amiga and C64 versions are on par with each other (in respect to 8 and 16bit differences of course)

Turrican Is one of the highest-rated games of all time on the C64 and well worth in everyone’s collection. 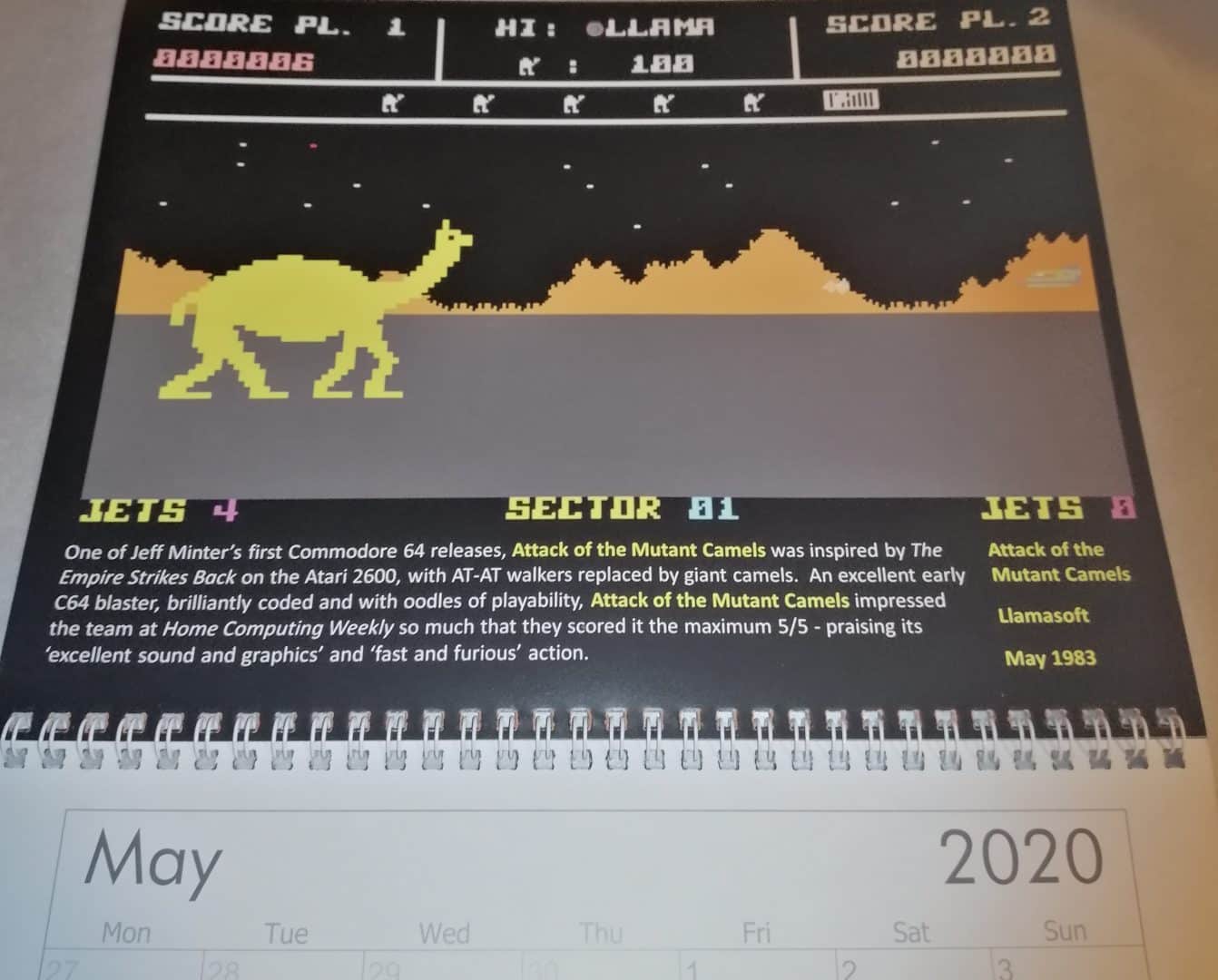 The May game is from game designer guru Jeff Minter and his incredible software house Llamasoft, yes it is Attack Of The Mutant Camels.

Attack Of The Mutant Camels is as good today as it was back in May 1983 really and this is thanks to how it plays and works as it is strange, playful and just downright mental.  The gamers out there who know Jeff’s other games knows very well his style and artistic vision and yes he is still doing the exact style today on the PC, PS4 and so on, even V.R.

I never did understand his games beyond Hover Bover until I had become a man, I mean, I always loved them but never understood his “expression” and style beyond that he did stuff others would never do. 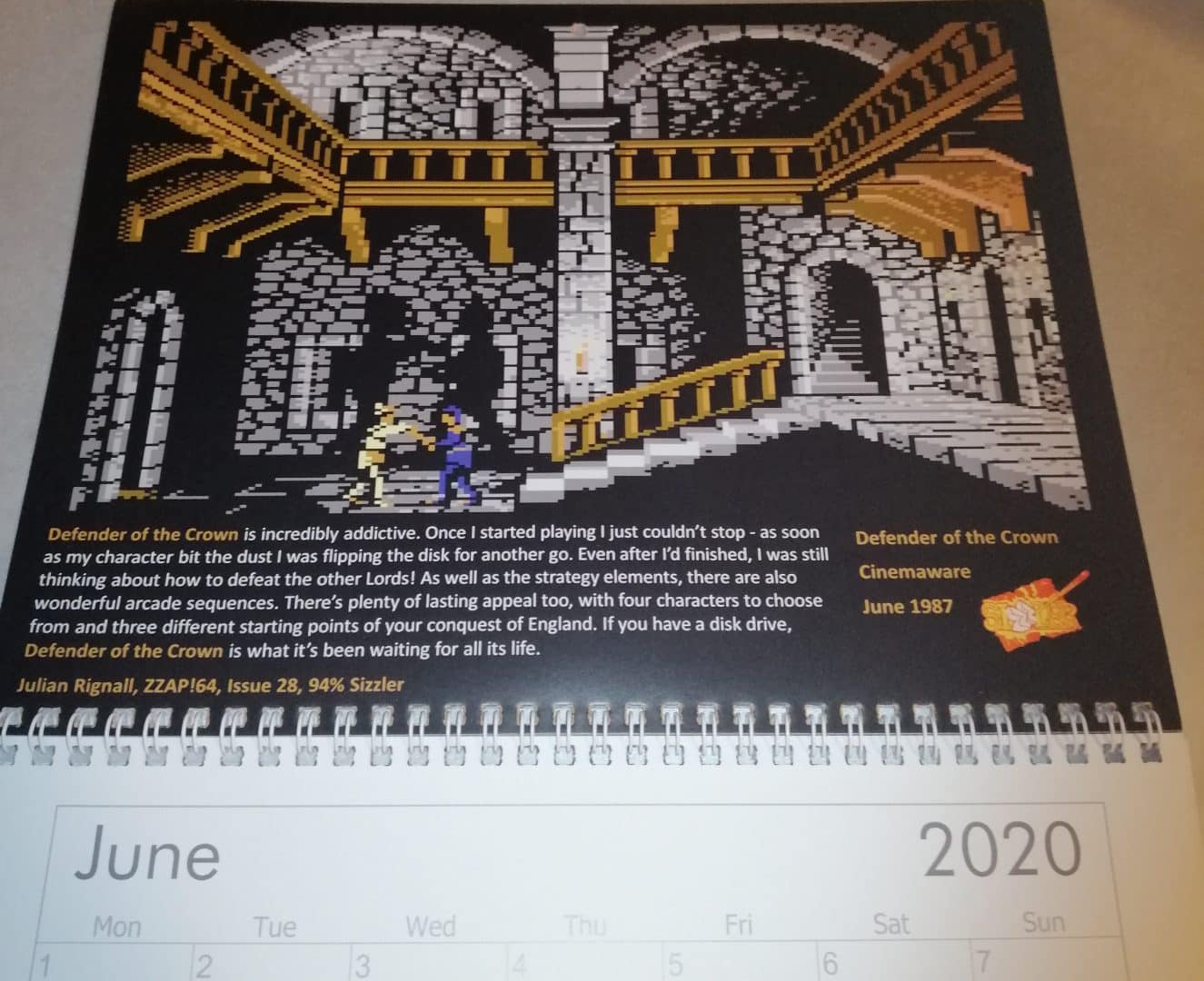 The June game needs no introduction and is quite possibly the most important game to come out in the 80s, it formed a generation and it certainly made both developers and gamers hungry for more of the same style and quality, yup, it’s Cinemaware’s Defenders Of The Crown.

Defenders Of The Crown launched in June 1987 it says but I know I played this in 86 on both the Amiga 1000 and on the C64, maybe it was American releases or the other way around but summer does indeed sound correct as i recall running back and forth from swimming and eating ice cream to return to play DOTC.

What a classic this is, i struggled to put it down and everyone I knew couldn’t stop drooling at it, the C64 version looked photorealistic I kept saying to my friends and they agreed, little did we know that the Amiga version was just around the corner and that actually had photorealistic qualities….umm, I’ll leave that for another time.

That said, the best looking version of DOTC was the Amiga version but the one with the best gameplay was for sure the C64 one, it had more to do and it had a certain edge to it all that just made it utterly exceptional for its time.

Ok, after writing this and looking at that picture… I need a break as I must fire up DOTC right way. 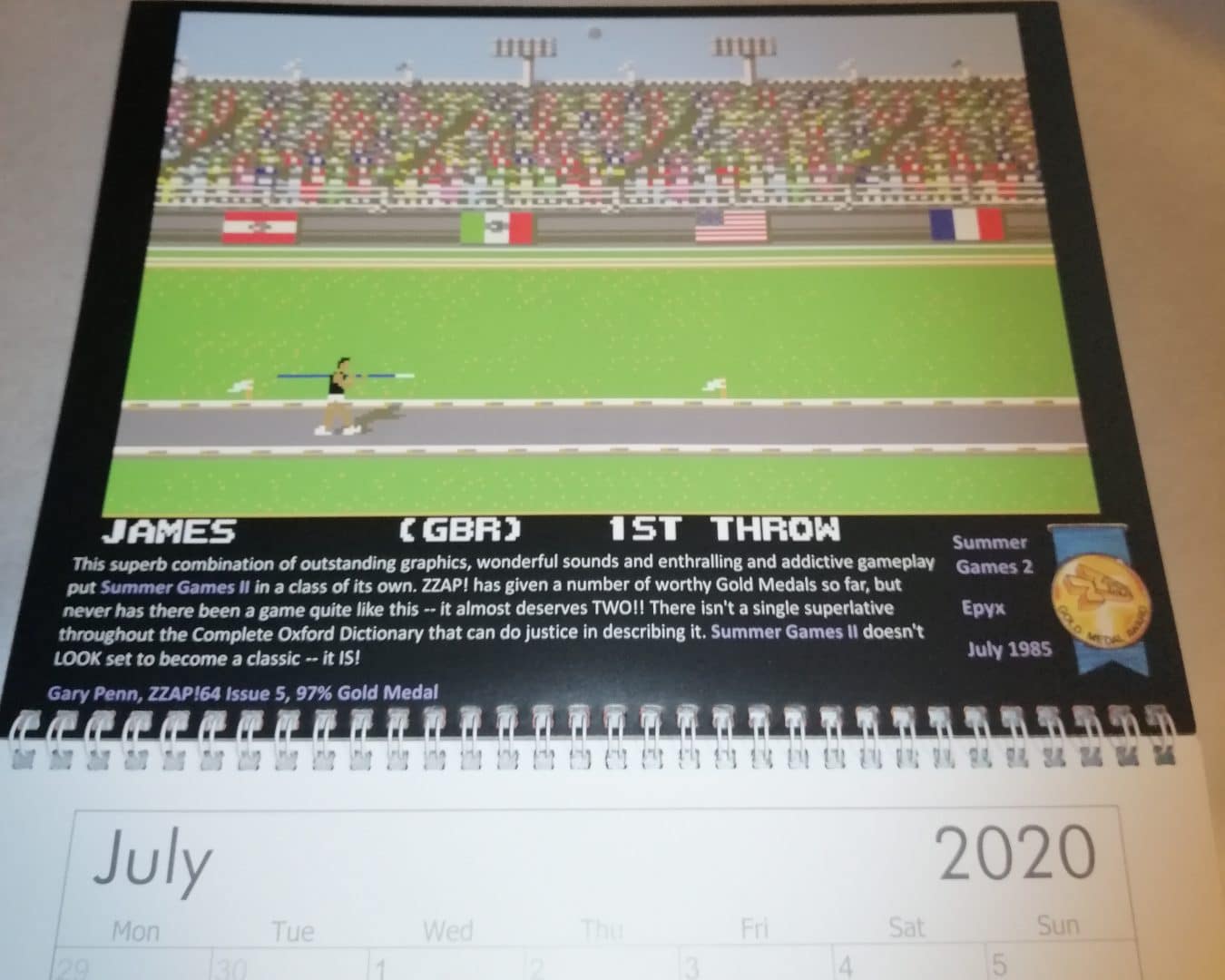 The July game is actually a game I never really liked, I loved the first game and i really enjoyed its later sequels but for some reason, I never did like Epyx’s Summer Games II.

I must admit that I haven’t played it in 30 years or so now which might mean that I’ll actually like it now, but what I remember is long loading times, annoying controls and a proper let down from the fantastic Summer games, Winter games, World games and the later California Games which was nothing short of sublime.

Summer Games II was released in July 1985 and scored high on the charts, sold really good and so on, maybe I should give it another chance? 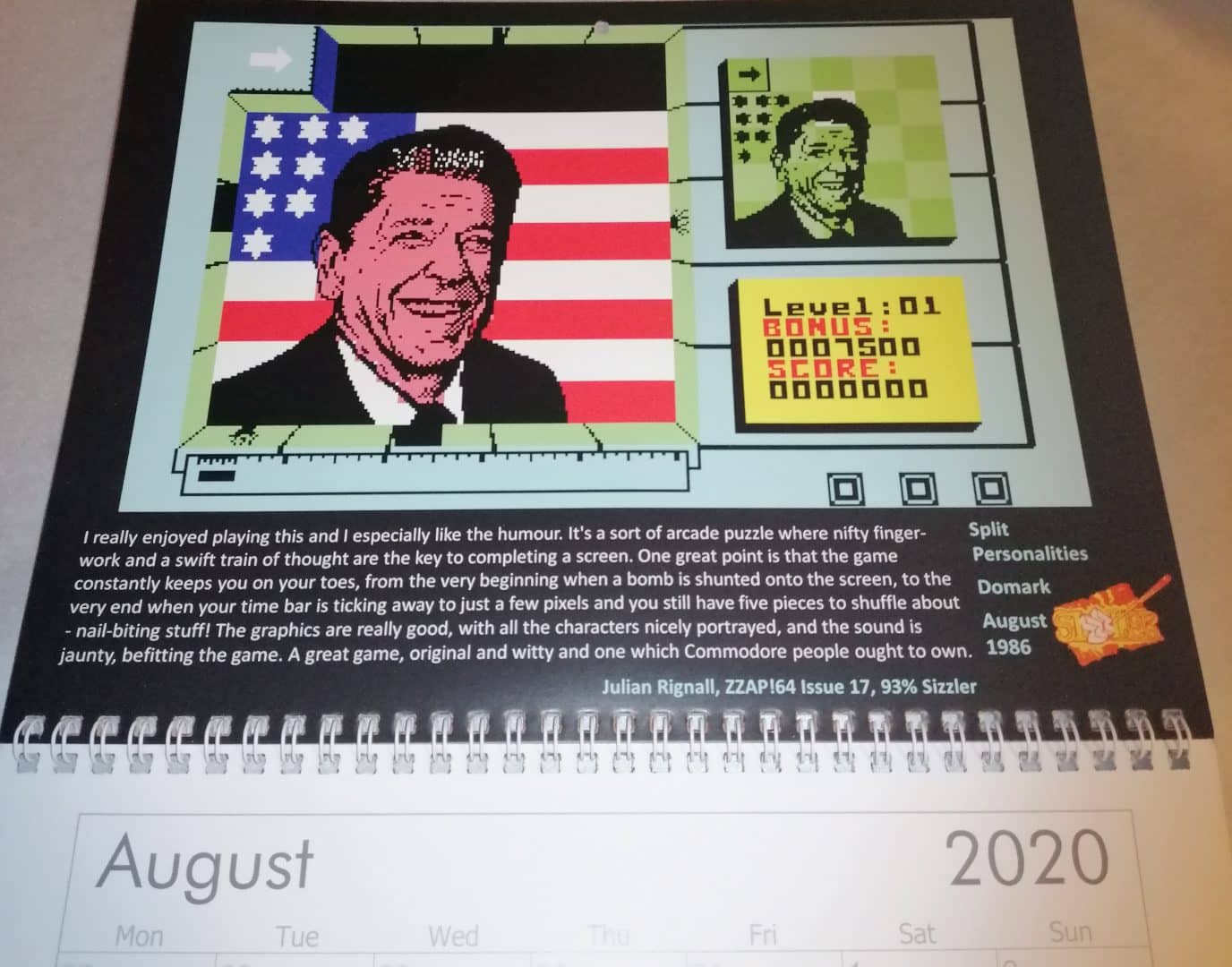 The August game is another one of those games that I was too young to understand back in the day, Split personalities are a “one screen puzzle games on a timer”  type of game and it is full of humour and silliness but I sadly never did try it again which means that I most likely missed out on a cult hit here, added it to my backlog now.

Split personalities were released in August 1986 to great critical acclaim.

Ok, i’ve decided to do like I did the other Calendar reviews here at the blog and that is to not show the entire Calendar just incase someone wants to buy it, can’t spoil the fun… that said, I just had to add these two months too. 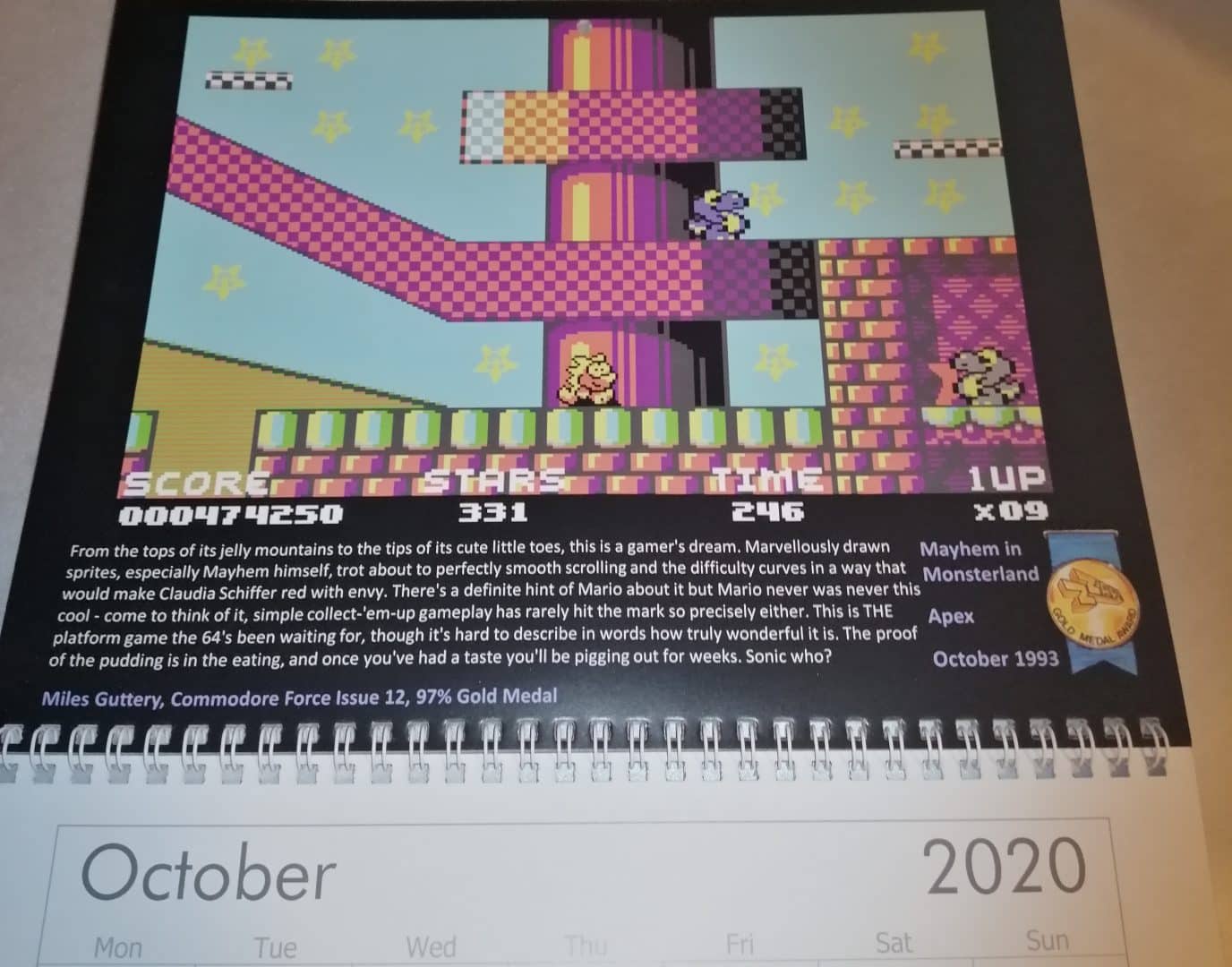 The October game is no other than the best platformer that ever came out on the computer, well until Sam’s Journey came out a few years ago that is, yup it is Mayhem In Monsterland by Apex.

I’ve read a lot of reviews about this game for the last decades and every single one rate it extremely high and call it a proper classic and a must-have in everyone’s collection, guess what? I can’t agree more as this just blew my mind and everything you thought was impossible on the C64 is on display here and it just shows that with skilled enough people, loads of time and a lot of finetuning and you will get a Nintendo beater.

Mayhem In Monsterland came out in October 1993. 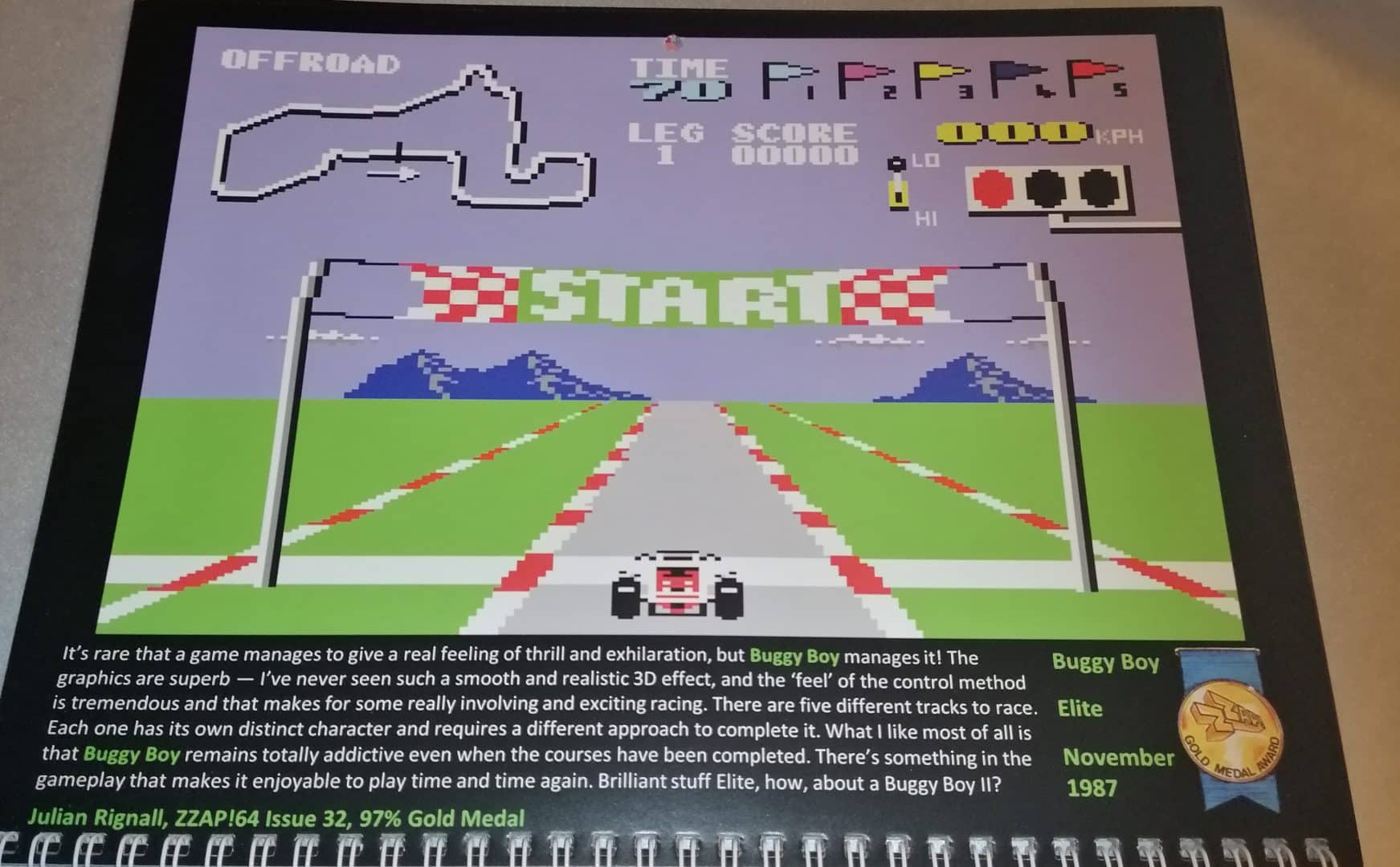 The November game is the wonderful Buggy Boy by Elite.

This port is better than both the Amiga and Arcade version if you ask me, I found it much faster than the Amiga version which was dead slow, more fun and yes the music and sound effects on the C64. Buggy Boy was a proper winner and in my opinion one of the best drive ’em ups on the C64.

Buggy Boy was released in November 1987.

This C64 Reloaded Calendar costs £12 plus Postage and packing and yes one more thing, a while back Martin Grundy reported in that he only had 10 left so if you want one then hurry up and check with him on either Facebook or Twitter or email him at Martincgrundy@hotmail.com if there’s any left. This is the gift that you want for Christmas.