Pierre Le Chef Is Out To Lunch by Mindscape is one of those typical games that went under the radar for many, no not because it was a bad game and definitely not because it wasn’t marketed either but for some odd reason a lot of people didn’t want Platformers at that time (especially on Amiga), most wanted 3D wannabee games like Doom and whatnot which meant that many never gave the game a chance at all.

Yes, Welcome back to The Games We Never Talk About (but should).

Pierre Le Chef Is Out To Lunch is a bit like the old arcade game Burger Time at heart but somewhat very different too.

The gameplay is all about finding the ingredients for a cooking guru and these are in the form of enemies (yes, I kid you not) which means that you will encounter attacking potatoes, eggs, bacon, tomatoes and so on in the game.

You don’t need to pick them up in a certain order or anything which means that as soon as you see an enemy just jump on his head and grab them with your net and then run down to the cage and put them in it, sounds easy doesn’t it?

Well, sometimes not so easy as you need to find the net to be able to pick the ingredients up.

The levels scroll smoothly both vertically and horizontally and you will have to check the whole level for your ingredients and yes, first of all, find the net that ain’t always that easy to find but luckily you can stun your enemies for a little while by jumping on their head so that they won’t be the biggest annoyance while you are running around looking for that net.

Once you find the net you will have to hit them with your net to pick them up, that said the best way is to stun them first by either throwing something ( like flour ) at them or just jump on their head as mentioned earlier.

To make things worse is that this game got a timer and guess what, it ain’t like you got a whole lot of time which means that quite a few levels will be much harder than you’d think.

Out To Lunch got six rather big worlds that kick off in Switzerland and then moves onto Mexico, West Indies, Greece, China and finally China. All of the levels got good graphics and music that represent the countries that you visit with snow, sand, jungle and so on.

One of the strange things with Out To Lunch is that it’s an AGA exclusive game and to me, it certainly doesn’t feel like one in terms of how it looks, sounds and plays but maybe this is down to the fact that there are smooth parallax scrolling music and sound-fx and quite a few enemies on screen at the same time which means that the game will need more memory than the usual Amiga 500 game.

That said, I was and still think that developers need to support the AGA chipset more.

The Out To Lunch box is just as good looking as the game and it certainly wasn’t over-representing the game or anything in terms of colours and design like so many flashy and good looking boxes used to do back in the day.

Was this one of the first games to have an Epilepsy warning?

I still got my registration card too which is a bit odd as I normally sent mine in but then again I also spent way too much money on games back then and had little money for stamps and such :-p.

The manual looks great too, very flashy and represent the game very good as well as being informative if not a bit of a huge spoiler in terms of levels and what to expect in the game.

The only downside of this manual is that only the front and back is in color and not the all the pages.

The Amiga CD32 version comes in one of those sexy paper sleeve thingies, fantastic looking box art and the colours used on the inside and the CD itself really sets the whole item apart from many others on the console.

There are very little differences between the CD32 version and the AGA version sadly but there’s game-saving via NVRAM and the controls are preset for the CD32 pad although you can play with 1 button joystick too if you want to. 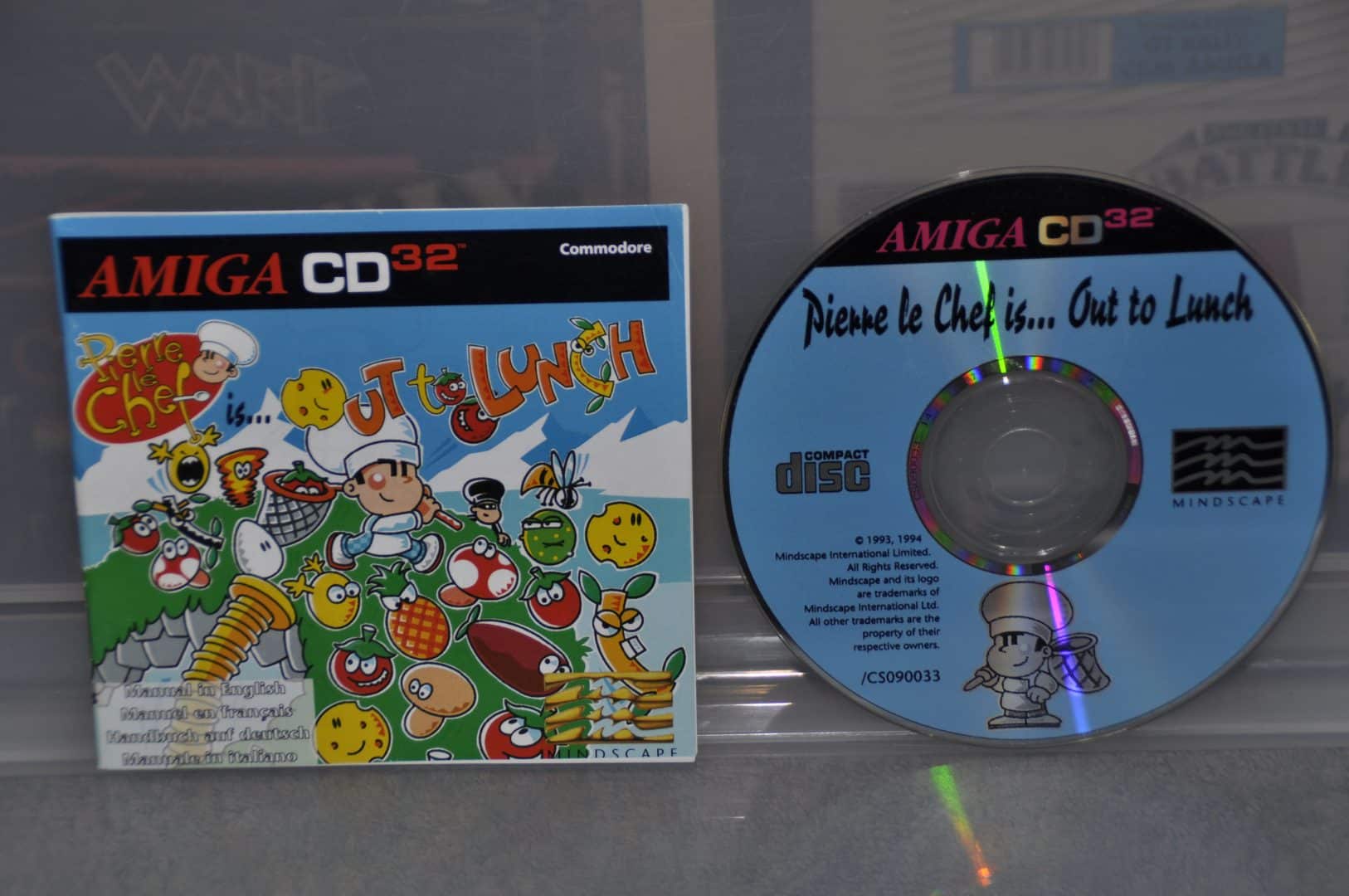 Oddly enough the CD32 version is over 52 MB uncompressed and I have no idea why as 50 MB bigger than the AGA floppy version indicates that there should be loads of other things in the game like an intro or whatever. 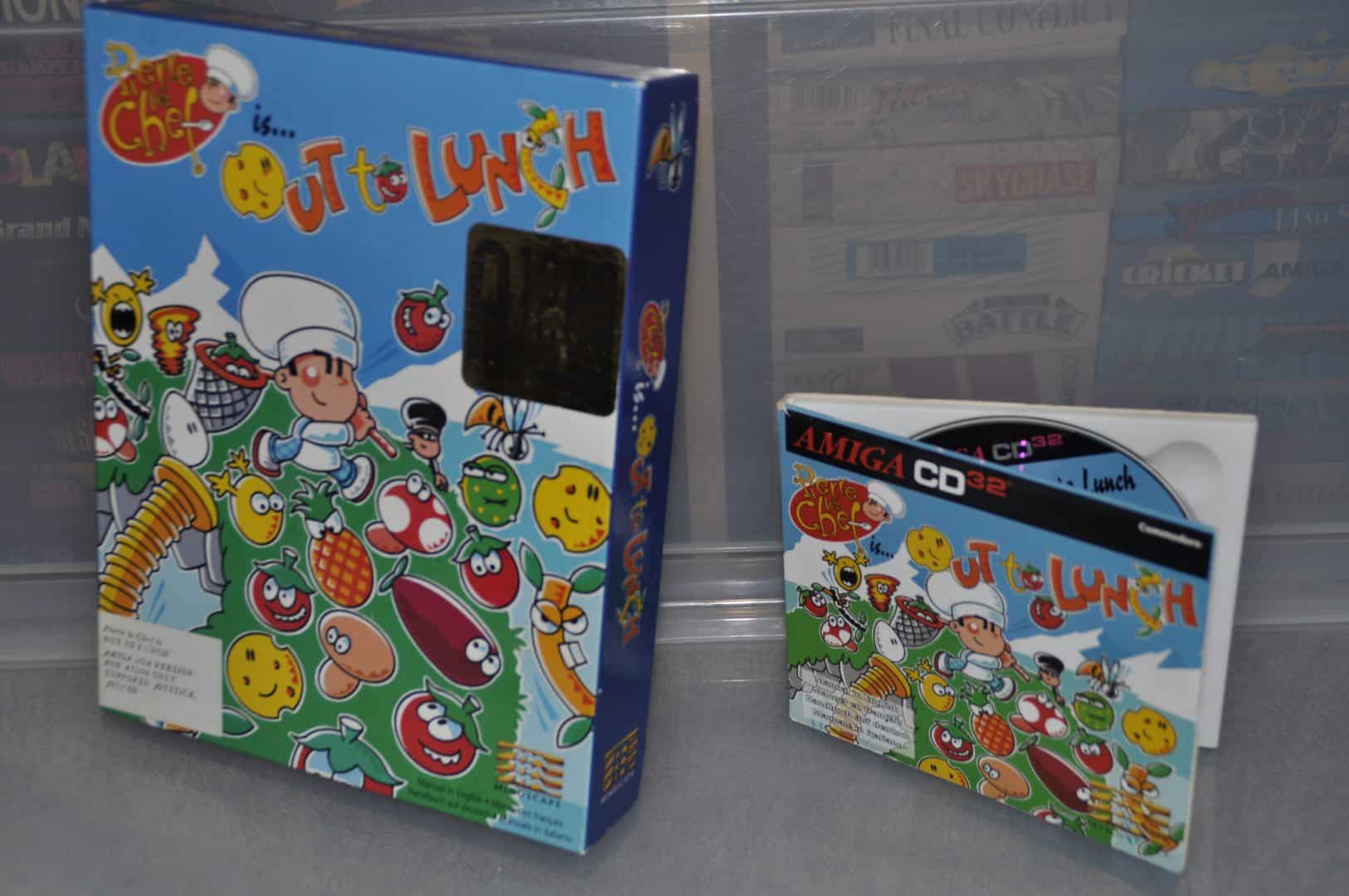 Two great versions of a rather good game and the flashy boxes helped to sell the game twice to me but yes the reason I got both ain’t only because of the flashy boxes but because the CD32 version won’t work on the Amiga 1200 and back then I had no CD32 which meant I just had to get the floppy version too. 25 years later and I got no regrets to say It in a nice way. Pierre Le Chef Is… Out To Lunch is one of those games that you just have to give a few chances before it grows on you, the charm and typical gameplay will get repetitive over time due to no boss battles and such but I’d say give it another go, write down the passwords or whatever and give it a go again later on as this is one of those that you will eventually like a lot more than you thought you would.

Screenshots are loaned from Hall Of Light and the boxes are from my own personal collection as always.

2 thoughts on “The Games We Never Talk About: Pierre Le Chef Is Out To Lunch”