Published by Activision in the spring of 1984, Decathlon arrived just in time for 1984 Los Angeles Olympics. It took inspiration from the arcade smash Track and Field, and allowed up to four players to compete in ten different events including 100-Meter Dash, Long Jump, Shot Put, High Jump, 400-Metre Race, 110-Metre Hurdles, Discus, Pole Vault; Javelin and the joystick annihilating 1500-Metres. With its large sprites, smooth animation and superb gameplay, Decathlon was popular with critics and gamesters alike scoring the maximum 10/10 in Your Commodore and landing 3rd place in ZZAP!64‘s list of Top C64 games in April 1985.

Decathlon is indeed one of those games that changed the way people perceived videogames: what in 1983 was on the verge of oblivion, submerged by loads of crappy products or demonized by adults, became the most serious fun with people sticking together trying to beat their limits while destroying hardware at the same time.

We did break countless controllers while trying to improve our personal record, often “fighting” head-to-head with our best companion. 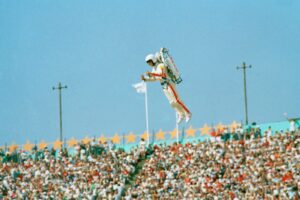 In the “real World”, 1984 Olympics will always be remembered for the USSR boycott (a pay-off for the same act done by the US in Moscow 1980) and for the flight of the rocket man at the opening ceremony; in our world of hard-core gamers, those Olympics lasted well beyond that hot Summer, and gifted us with an amazing amount of hours of play that are still remembered today.

If you still have some old joysticks still in good condition, please DO NOT play this game: it’s addictive and dangerous. You have been warned! 🙂