I have to admit it: retracing part of the story of the Amiga and the Commodore64 by means of Martin Grundy’s calendars has really been a blast so far. Not only it is a nice stroll down memory lane, but it is also a way to retrieve lost gems that I personally not had the chance to play, back in the day.

I am fairly sure that most of you will be familiar with this title yet, for those who aren’t, let me report that it was a nice (and probably new for the time) variation in the shooters’ landscape. Published by Accolade in 1985, the game saw you in the shoes of the Sheriff of Gold Gulch, a small little town on the western frontier. As such, it was your duty to make sure the peaceful town remained … well, peaceful. At least until sunset!

The gameplay was really easy and effective, although maybe boring in the long run. You had to face a series of encounters that could have a different outcome depending on the answers you selected during the dialogs: pick the wrong one, and you better off drawing your six-shooter real quick if you don’t want to end up watching daisies from the root side. 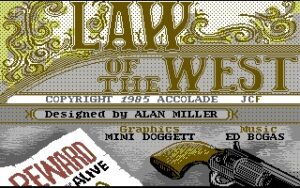 Law of the West was one of Accolade‘s launch products and is the only game to be designed by Accolade co-founder Alan Miller. The game’s superb graphics were by Mimi Doggett who also produced visuals for Accolade’s other C64 hits, Hardball! and Psi-5 Trading Company. The game bridged the gap between the keyboard-driven adventures of the mid-80s and the point-and-click games such Maniac Mansion which became popular at the end of the decade. Law of the West was well loved by gamers and warmly received by ZZAP!64 who described it as “highly atmospheric and enjoyable with exceptional graphics”.

The beautiful and colorful graphic made this game a must-have, and even though it might not have aged that well, a match or two really won’t hurt you. Have fun!