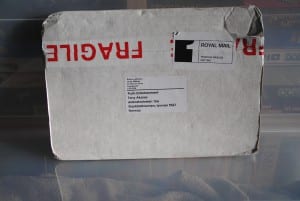 Another book! yup this is indeed the third book review in a month here on this very blog. This time around it is time for the book about the company OCEAN, which was a very popular company from the mid-80s and up to the mid-90s.

Ocean had quite a few up’s and downs but all in all most of the time they had a label which people could rely on and just to mention a few names without even looking at the book, Rainbow Islands, Addams Family, Mr Nutz, Worms, Lethal Weapon, Target Renegade and New Zealand Story.

My first encounter with Ocean must have been Rambo 2 on the C64, i am not 100 sure though as it might have been Decathlon too. 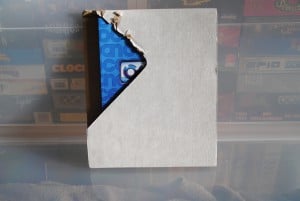 The book arrived today and this is a book that i have been wanting for quite a while.  Chirs Wilkins shipped out the book last Thursday and best of all it is a signed copy. His signature means a lot to me in both a collectors view and that that he took his time to do it for the fans.  I am not sure how many books he signed as he had a facebook thread telling people he would sign a limited amount of books for a short time.

The book arrived in mint condition, the post has been gentle with it by the looks of things.

Thick book, 260+ pages with loads of pictures and detailed info about every in-house developer or so and there is also from selected teams like Special FX and Ocean France (Yes!).

The book is of very good print quality, the layout and colours are professional and easy on the eyes yet full of “magic”.  Loads of pictures in it too and quite a few of those Ocean Game adverts that we had so many of in old magazines.

The Ocean book looks great and fits nicely on my bookshelf together with all the other Amiga and retro books.

The book covers a lot from the early years of the Ocean history, stuff that mostly only in-house and relatives to the guys who worked there knew about. I won’t go as far and say that the book delivers loads of secrets of the past but, there are some really nice things in here that many will find new and interesting as well as some of those secrets that got out half a decade or so ago (on a certain Ocean website thingy ).

The later years of Ocean are indeed in the book too and also well written and informative and there is, in fact, some things in there that i actually never did understand before today.  The Infogrames deal and the reason why Ocean produced little games for the SEGA consoles and what eventually happened to the brand (Ocean, Imagine etc).

It is no secret that i was and still is a huge fan of the games Ocean produced over the years and by that, i mean both as a publisher and a developer.

The Hunchback series was excellent and i am 100% sure i can draw every stage of the first game with my eyes closed.

Target Renegade was another favourite on the C64, i still find that game incredible and while it may not have been a technical marvel to some, i find the graphics and sound and general playability of the game to be one of the best on the C64.

The Imagine years (before and after Ocean) is detailed in the book and a really good read.

Gotta love that picture on the left, these 2 pages covers some of the best games i played on the C64, The Vindicator aka Green Beret II (huh?) and Game Over and on the other page in the same picture Total Recall is mentioned as well as Mr Nutz.

I will never forget the first time i tried Game Over, incredible game and with such a strange name to boot meant that we talked a lot about it at school. The Vindicator was another gem and while this was very late in my time as a C64 gamer i still went back and played it quite a bit even though my Amiga was being heavily used.

The Vindicator, Combat School and Game Over were 3 games that i never understood why they never went onto the 16bit format (Amiga) and was one of those things that i kept on dreaming about for years after i had gone Amiga only.

Reading this book has sparked a million memories for me, i mean, i am a huge retro fan and i still use Amiga daily and i haven’t got a pc or a mac but as years have passed i have more and more turned to consoles for my gaming needs. I do use WHDload on my real setup but i find my self-booting up e-UAE on my A1xe most of the time.

When i first noticed that Mikie advert, a game that i had totally forgotten that Ocean ported to the C64 somehow set emotions in action (mind the pun) and all of a sudden my love for Ocean and Imagine went a few more notches up.

Seriously, this book is simply one huge trip down memory lane and the more i think of it the more i just need to sit down and do an Ocean game collection article soon. I am 100% sure that i have over 100…

The book covers a lot of the key members with a portfolio/cv of their games and jobs but also about some fun facts, very interesting read for people who never worked in the industry back then.

The more i read, the more i started to miss the old days of game development and how everything was a joy, smoking weed and boozing was not uncommon back then.  It was not all joy though as a lot of the developers around the globe did not get paid, contracts were broken on a daily basis and hysterical team members quit their jobs in rage. 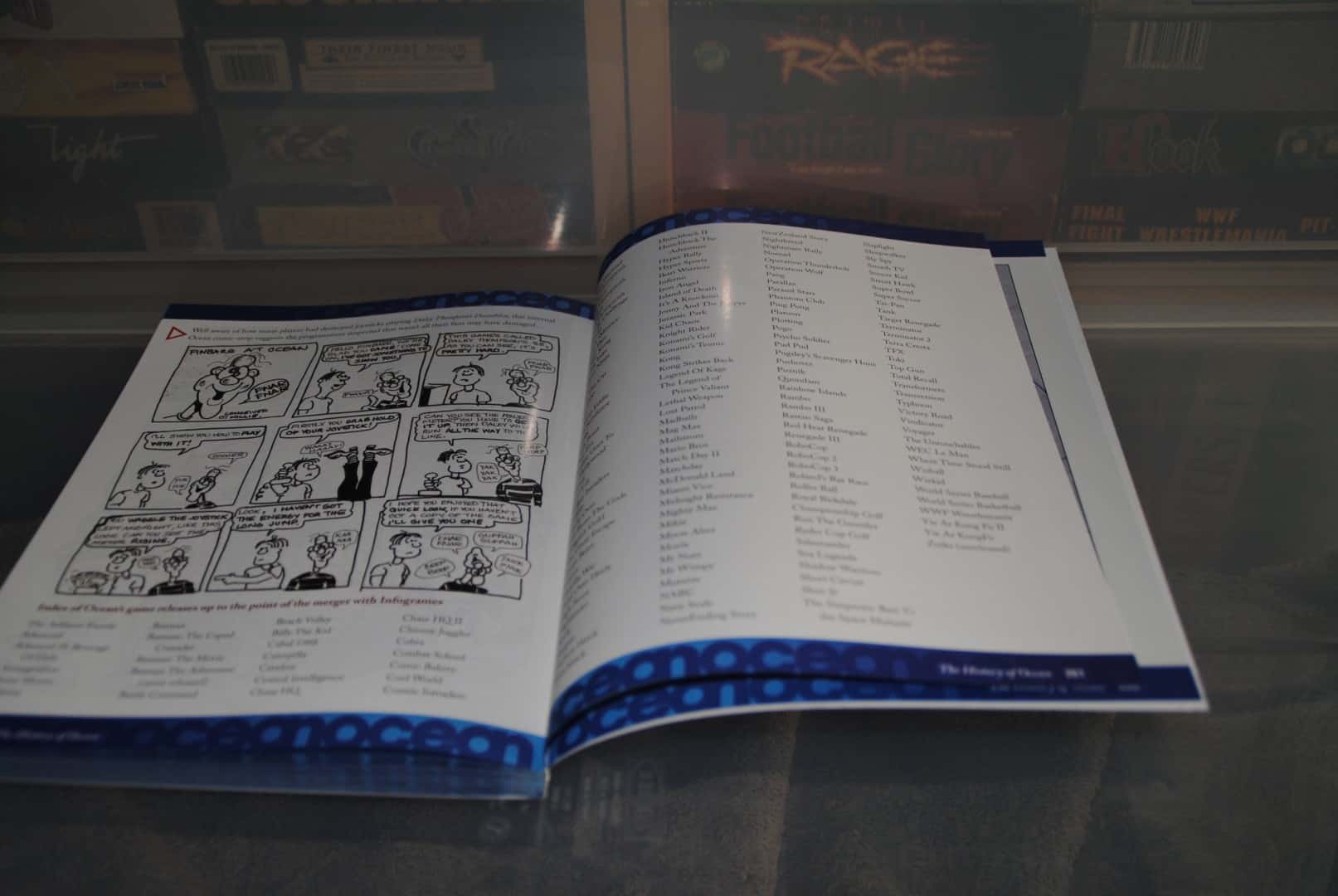 Not the best picture in the world but this one shows the list of Ocean’s main in-house games, games like Team17’s Worms (and lots(?) of PSOne games) is missing though, i have no idea why but i will ask Chris Wilkins about this soon ( i guess this was down to them only being a publisher in a certain region?).

The list shows a gazillion awesome games and some very bad ones and the reason for this is due to different license deals like for instance a movie license. This was a very problematic time for this kind of games as no one in the movie industry understood games and its development system. In most cases of licensing deals, the game turned up short as the movie studio decided to not give out the full story or material (pictures/logos etc). In many cases, a game would be released with a lot of errors in it and i am not talking about bugs here.

Ever played Rambo III, Jurassic Park or Dennis?. All of the above have for instance problems with the storytelling and certain scenes and differ quite a lot from the movie.

There is another problem too, development time, back in the 80s a team of 3 could work day and night on a movie license and in the end, it would turn out catastrophic as the movie company and other parties involved decided to do a tiny budget and rush the game out. 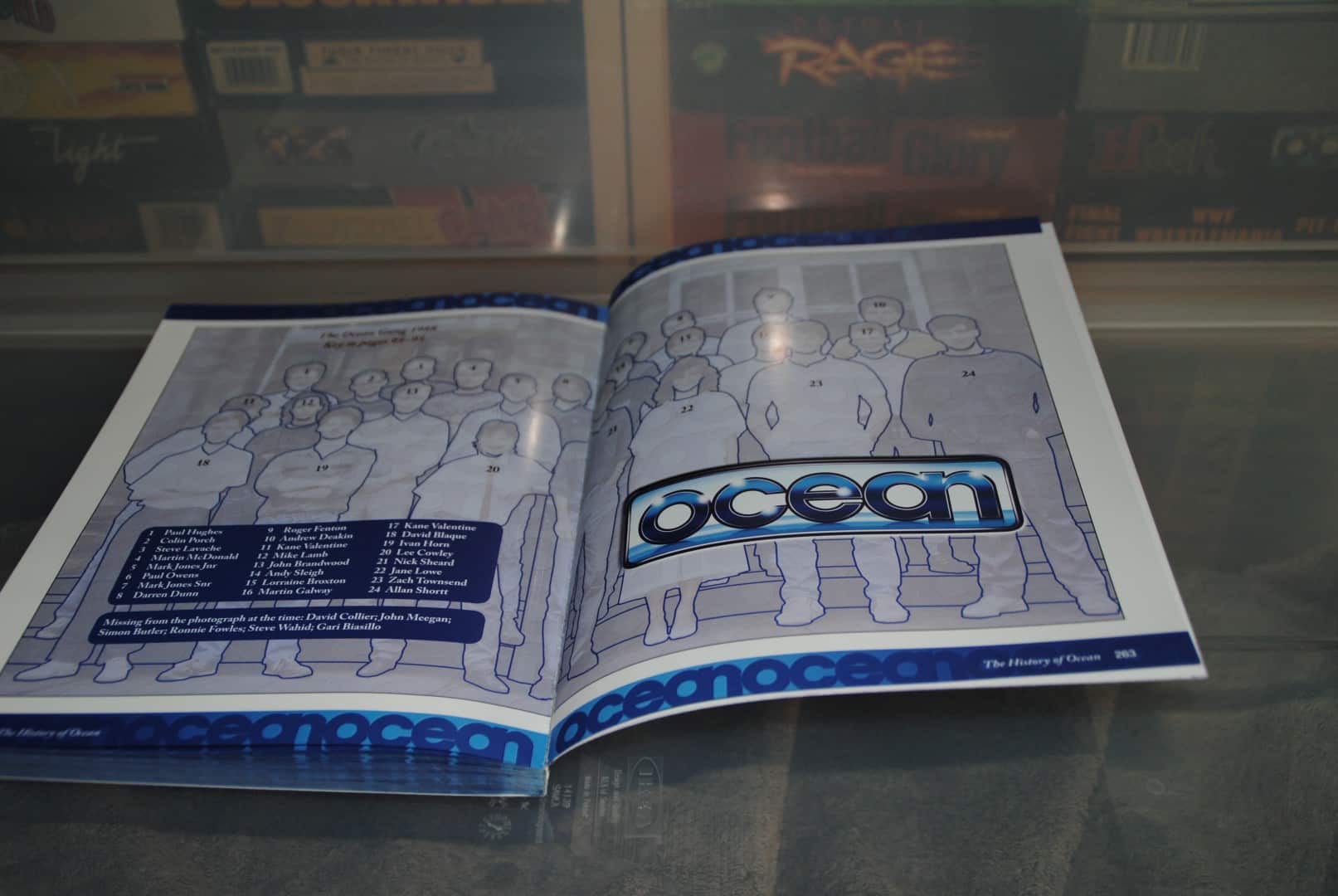 Say my name, say my name! nope, it is not in there. The list above mentions a lot of known names, a famous team, even today even though it has been 20 years now since it was closed down/bought out by Infogrames/ATARI.

Tight budgets, tiny teams, crazy work hours was just some of the things that happened in the early days of games development

To me, this book has to be the best game oriented book ever for me. One of the reasons for this is of course because of the company it covers but also for the games and how it is written.  I have spent endless of nights reading IRC channels, websites and bbs logs about many companies in the past and Ocean was one of them yet i find the book very good and informative.

The book is a must have to every retro gamer out there.