What exactly makes a collection Limited, is it the amount of copies made or is it down to the actual deal or maybe it has to do with sales numbers achieved with the releases done before the compilation or what exactly is it, that is a difficult question when it comes to old SEGA and EPYX boxes with compilations like this as we know that these things sold incredibly well both in original form and re-releases/budget versions.

It’s no secret that SEGA has an incredible heritage when it comes to their games and their arcade games was money machines long after the actual market disappeared from the local burger joints, bowling places etc and producing ports for the computer and game console market was a given even if SEGA just licensed out their IP’s to both competent developers and rubbish ones. 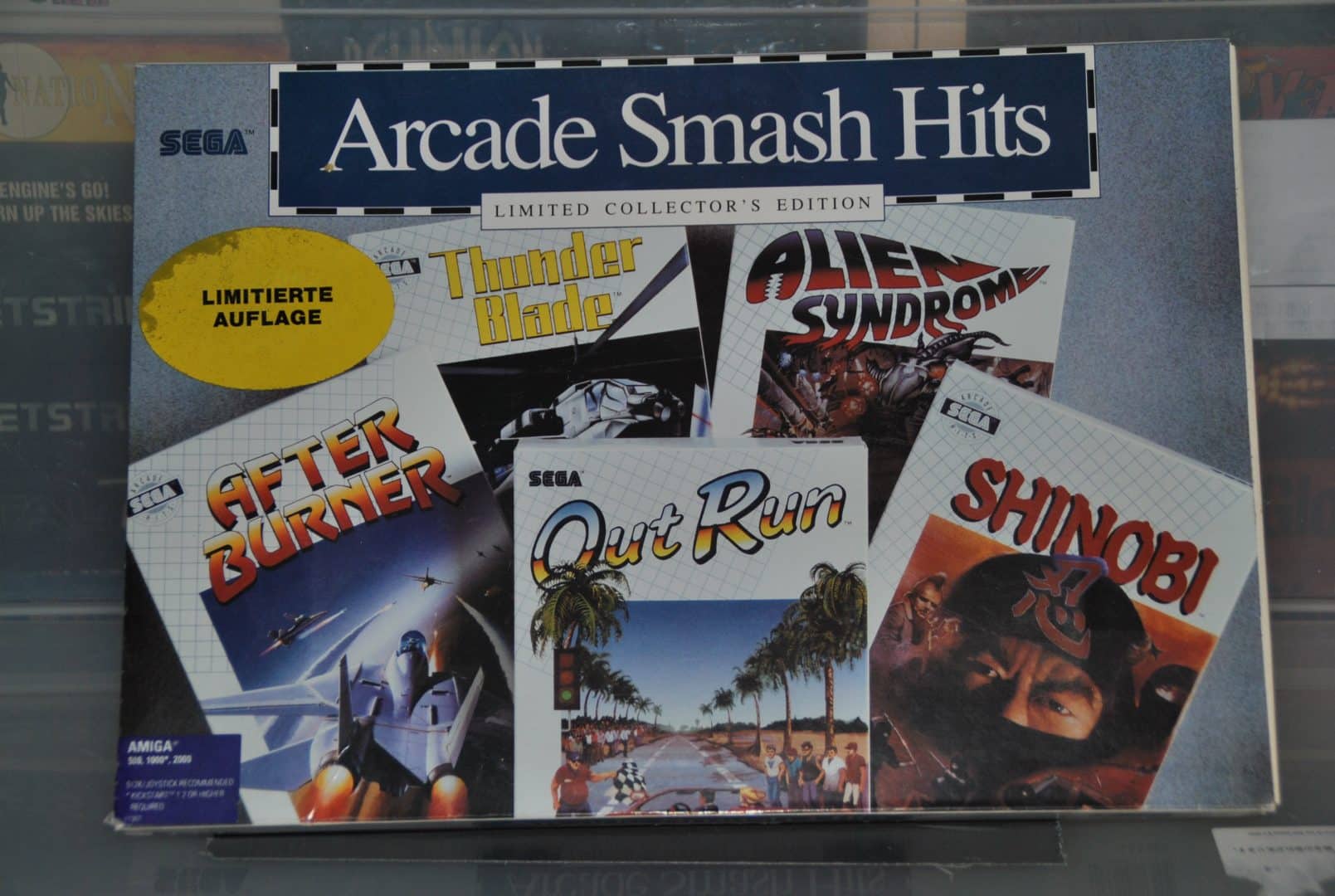 This Limited SEGA Arcade Smash Hits collection includes 5 of their biggest games at the time it was released and by all means it was games that people played both at home and at the local arcade though most people fell that the quality variation of these ported games was absolutely rubbish on most formats they still played em and compared them more than they should have done to the Arcade machines as in most cases it led to a huge disappointment. 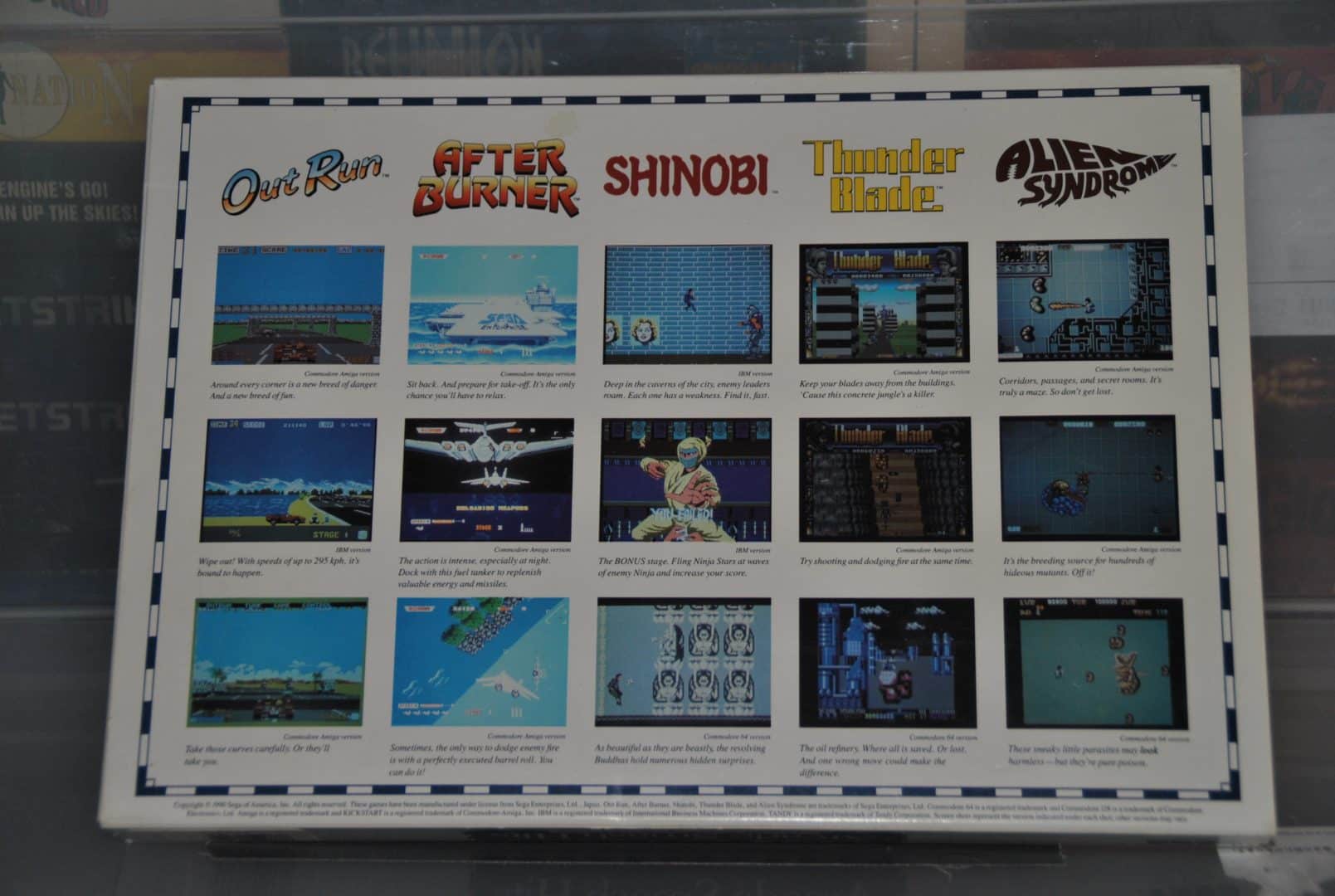 Re-Releases is a strange phenomenon, the original game release could differ from the re-release with cut down versions but in this compilation they managed to make some of the games work on a single floppy while the original release was on 2 floppies and while many of the developers wouldn’t acknowledge that in the past the game took ideas and compressions from the cracker scene and in some cases they even used the cracked version…. 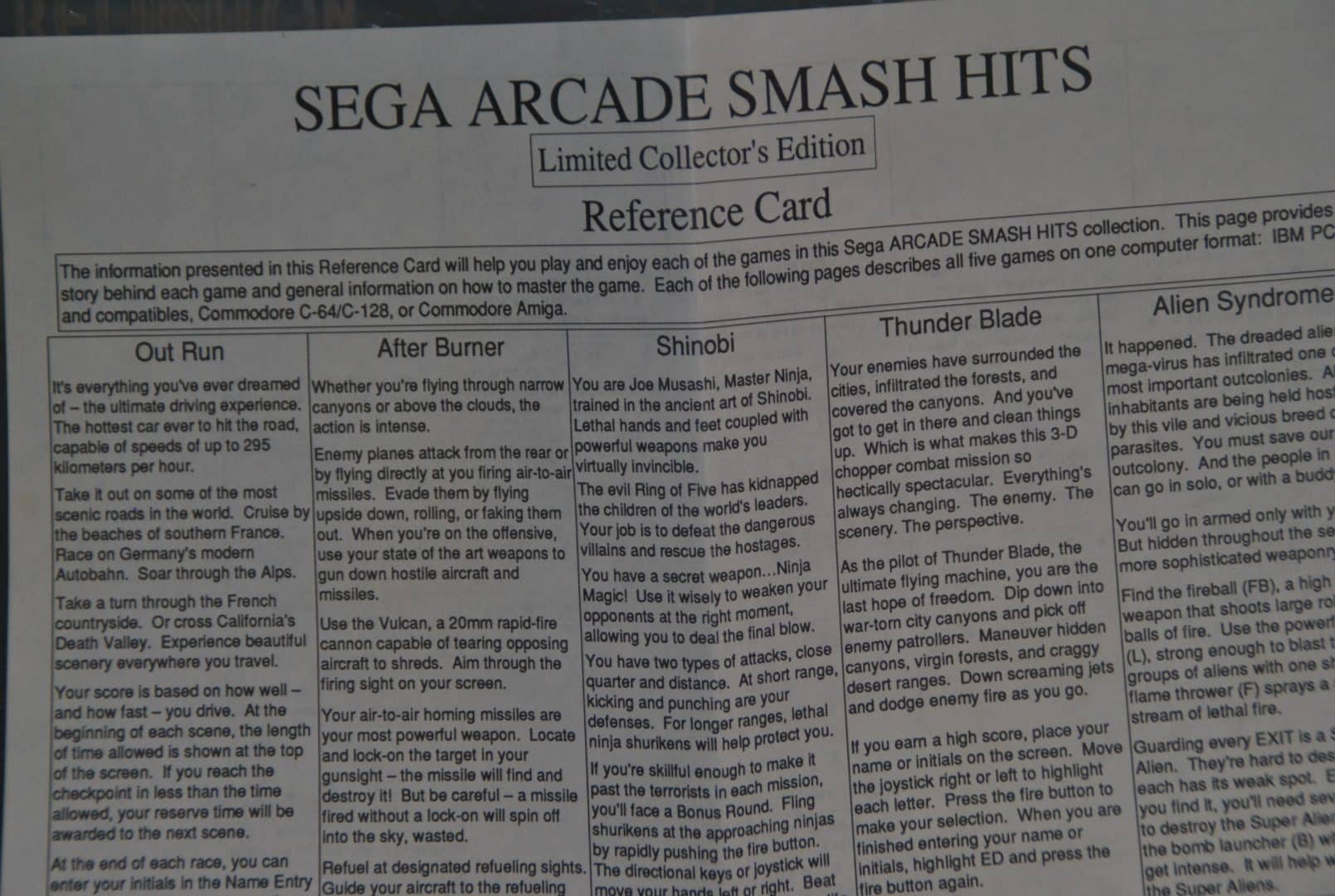 Other re-releases and budget versions could have stuff removed entirely (like an intro cutscene etc) and an even stranger one is like in this compilation where it included different versions compared to the original releases , Afterburner on the Amiga has two versions (1 in this package of course) out there which believe it or not was actually developed by 2 different teams and the games ain’t even identical and in Afterburners case one version is pretty good and one is not so good…or rather …rubbish.

It has to be noted that there were publishers and IP holders that did these things on the C64 too, Flying Shark being one of many. 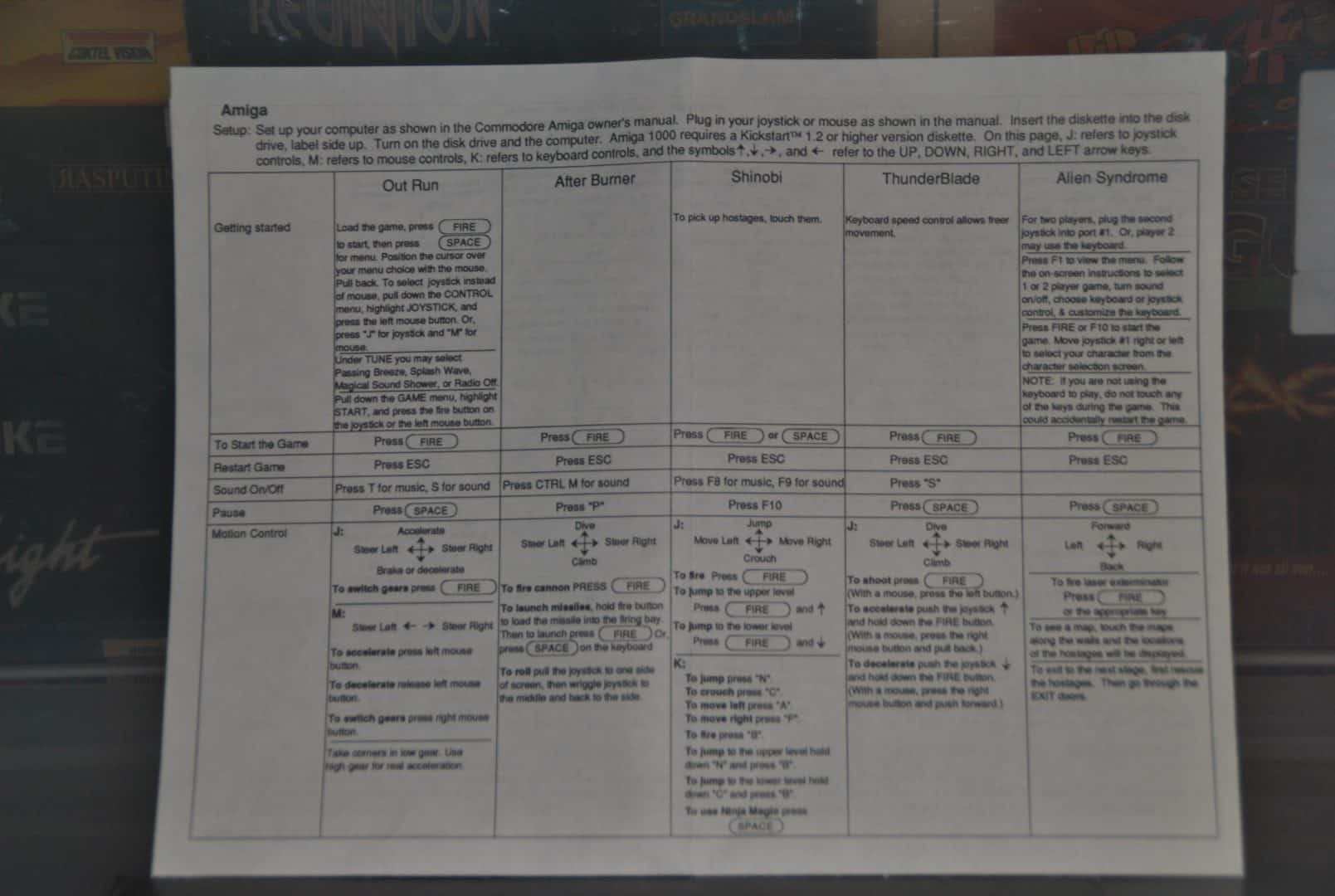 This compilation came on various formats and they managed to get the controls wrong as they had used the “other” version, quite interesting and at first i believe my box and games was incomplete or tampered with by someone at the print or pub/dev houses.

Yep, it says SEGA America but this was released in Europe with the American versions tho pictures show European versions… What has Activision to say about that?.

Gotta love them registration cards, a lot of these things is missing from collections as people either filled em out and sent them in or in regions like EU where these cards were useless due to the fact that it was only for American people.

Back in the day of arcades and the C64+Amiga, there was a way to get the best versions at home and in the Arcade, that is if you knew which version to get and from where, i have included some Amiga pictures, no C64 pics here…

—Outrun for instance was crap on the Amiga, both versions! but quite good on the C64, if there had been produced a version of those 2 mixed together then you would have had a pretty good port.

—Alien Syndrome was great on the Amiga but then again so was the c64 version.

The only bad thing i can say about this game is the loading screen, looks bad on both versions. Both C64 and Amiga versions are good games and play good, no slowdowns and boss battles are well made and a game you might even complete as it’s a wee bit too easy for its own good but still great fun.

—Shinobi, both c64 and Amiga ports was quite good but the graphics on the Amiga was sub-par and didn’t look like it was a 16bit game at all, also there is missing stuff in the Amiga version (like when exiting a level and some maps)

Always been a fan of the opening in Shinobi, the music is great and well worth listening to.

Less color than the Arcade but still ok plays well too.

—Thunderblade was much better on the C64, the Amiga version was rubbish.

Looks quite ok but moves really choppy and unplayable (one would die every 5th second because of it hehe), the C64 (and Arcade) versions had none of those issues.

—After Burner, nothing comes even close to the Arcade version but one of the Amiga versions was quite decent but as i said…the other one was rubbish.

Whats up with those borders then?

Good looking but i have always preferred the other (unoriginal) picture more. The game looks great and much closer to the Arcade version.

Most if not all PC versions were utter crap and a waste of time and money that is at least until the SVGA came and PC became an attractive format.

SEGA ports got much better later on (on The Amiga anyway) with excellent ports like Power Drift (C64 version is one of the best drive em up’s on the system), Dynamite Dux, Bonanza Bros, Golden Axe (C64 too) and same with Action Fighter + others.

SEGA Megadrive/Genesis and even MasterSystem had some really good ports of their games but i guess that’s down to the fact of money and being supervised by SEGA themselves?.

So, someone fucked up big time with “some of the versions” but i have no idea if this is just with the C64 and Amiga versions or if it was a problem on the PC / Atari ST and consoles as well, anyway it’s an interesting package and one that is hard to find today and a lot of collectors have it on their wanted lists. 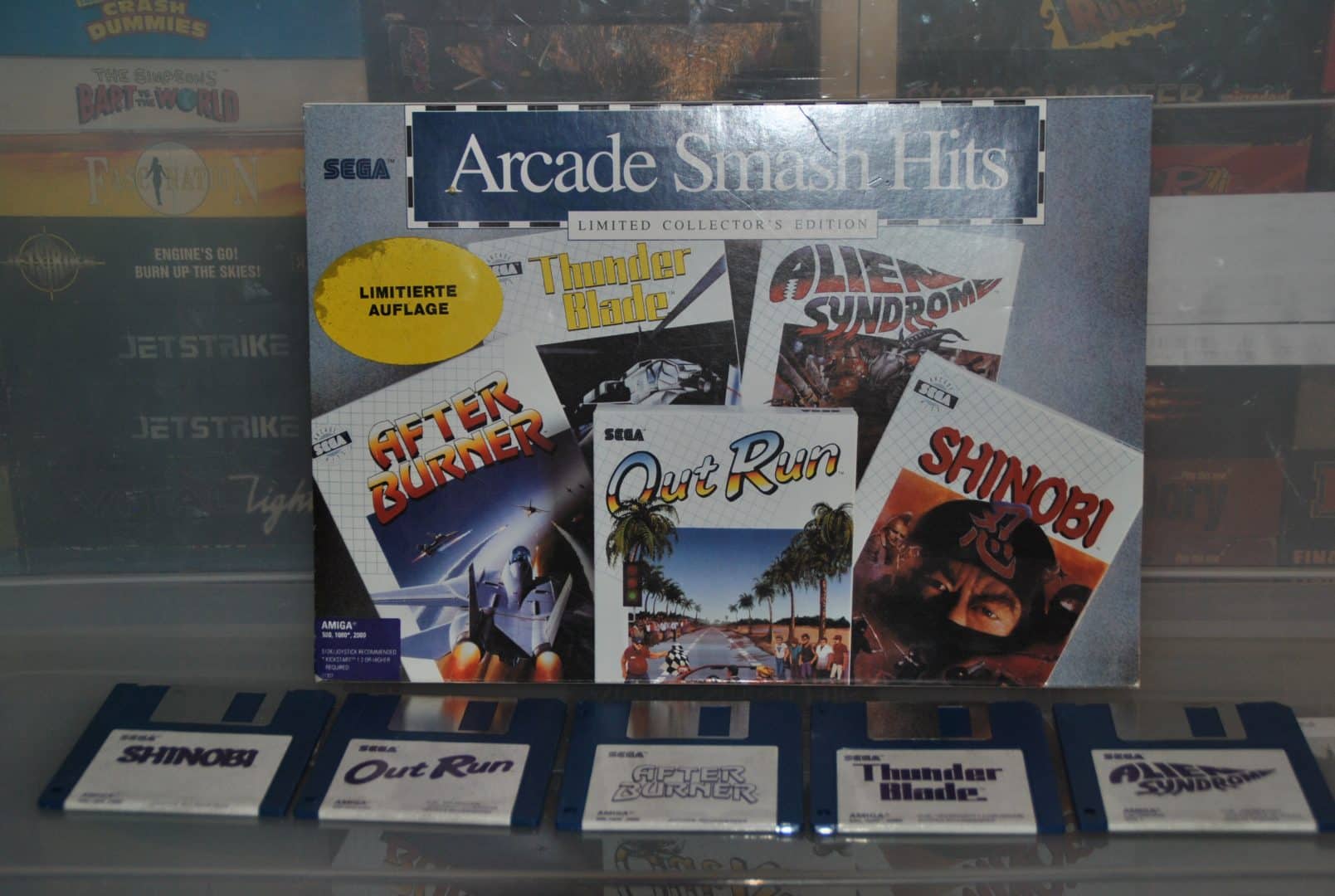 Finally, box shots and pictures come in varied quality due to the fact that i don’t want to open up posters and papers as the boxes and manuals etc is getting really old and i want to be as “gentle” as possible with them, that said… i will do better shots the day i get a bigger room for my collection(s).