The best thing about today’s consoles is that we get a lot of new games for them, well, quite a lot of them are actually remakes and whatnot from the old times and maybe best of all is that they even do the lesser known/abandoned games too.

One of the least expected revivals happened a few years ago with Bubsy and then there was last years Shaq Fu sequel that made a lot of people wonder what the hell was going on when I actually enjoyed that new game quite a bit.

Now all of a sudden they have decided to revive a game not many even knew about in the first place,  — They refer it to as ” The SNES exclusive game The Ninja Warriors by Natsume and Titus from 1994″.

This is The Ninja Warriors: 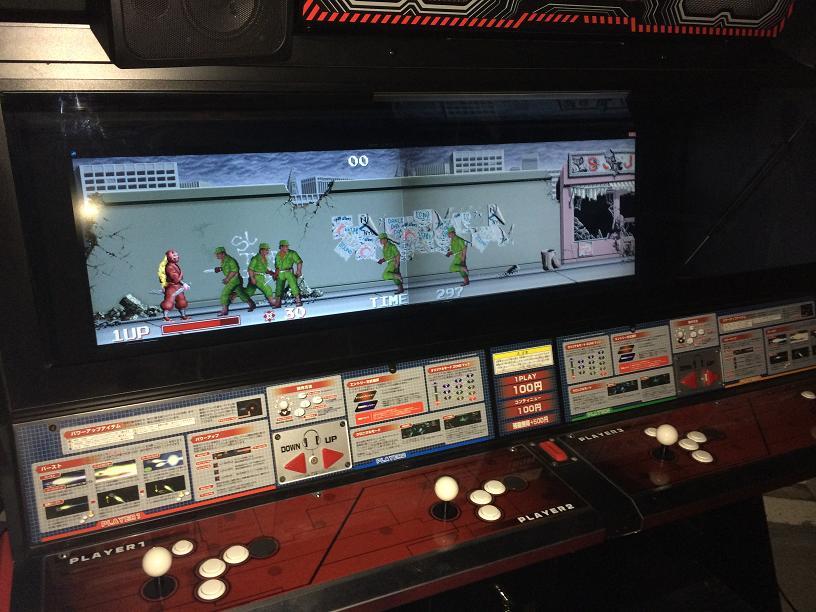 This is how I remember The Ninja Warriors, the 1987 Arcade game from Taito which was later ported to many formats by The Sales Curve / Random Access and published by Virgin Mastertronic.

The Arcade machine was most likely the first that gave me that WOW OMG sensation and this was mostly because of the size and that it featured a triple screen display, it looked absolutely amazing and it screamed LOOK AT ME, INSERT COIN NOW!

I never expected to see that cabinet ever again and right I was as now 32 years later I still haven’t seen it… but then again I never saw many of the old cabinets again unless they popped up in our local arcade or whatever.

The Ninja Warriors On The Commodore Amiga:

Taito used to be the king of the arcades for me and quite a few of them translated badly over to the Commodore 8 and 16bit formats, The Ninja Warriors though was one of those that was downright brilliant on the Amiga and that for a reason, the team that did it was the one behind Rodland, Silkworm and SWIV among others. 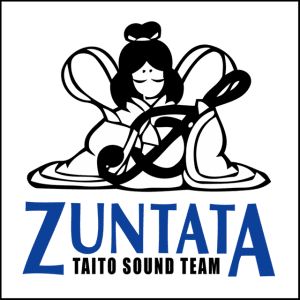 There was only one negative thing to say about the Amiga version, and that was the missing in-game music, but the utterly brilliant opening/intro and main menu tune is most likely the best of all the versions out there for that time, including the Arcade version.

Ron Pieket stood for the Amiga code and music and his work on the original Zuntata classic really lifted it up a few notches by adding a more deeper sound to it. 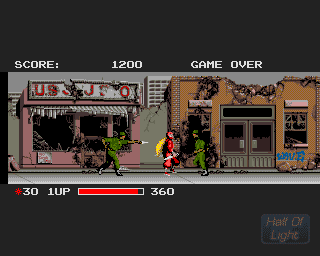 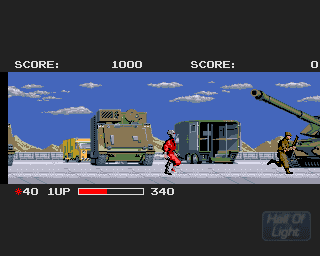 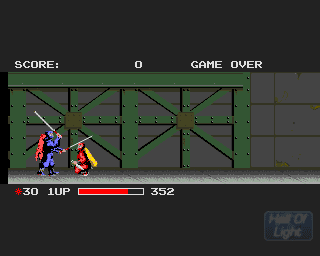 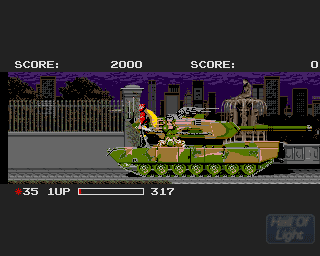 I played the game again this weekend and I still love it, the animations, the graphics and the whole feeling of the Amiga version are just as good as I remembered it.

The Ninja Warriors was always a 2 player game really, especially on the Amiga anyway and the reason for that is that it is a very, very difficult game to master.

I still suck at the game and while I do remember getting to the final boss I simply can’t remember if i managed to kill it.

The Ninja Warriors may not have the best box design out there but I simply couldn’t let this sealed one pass me by, see pictures below. 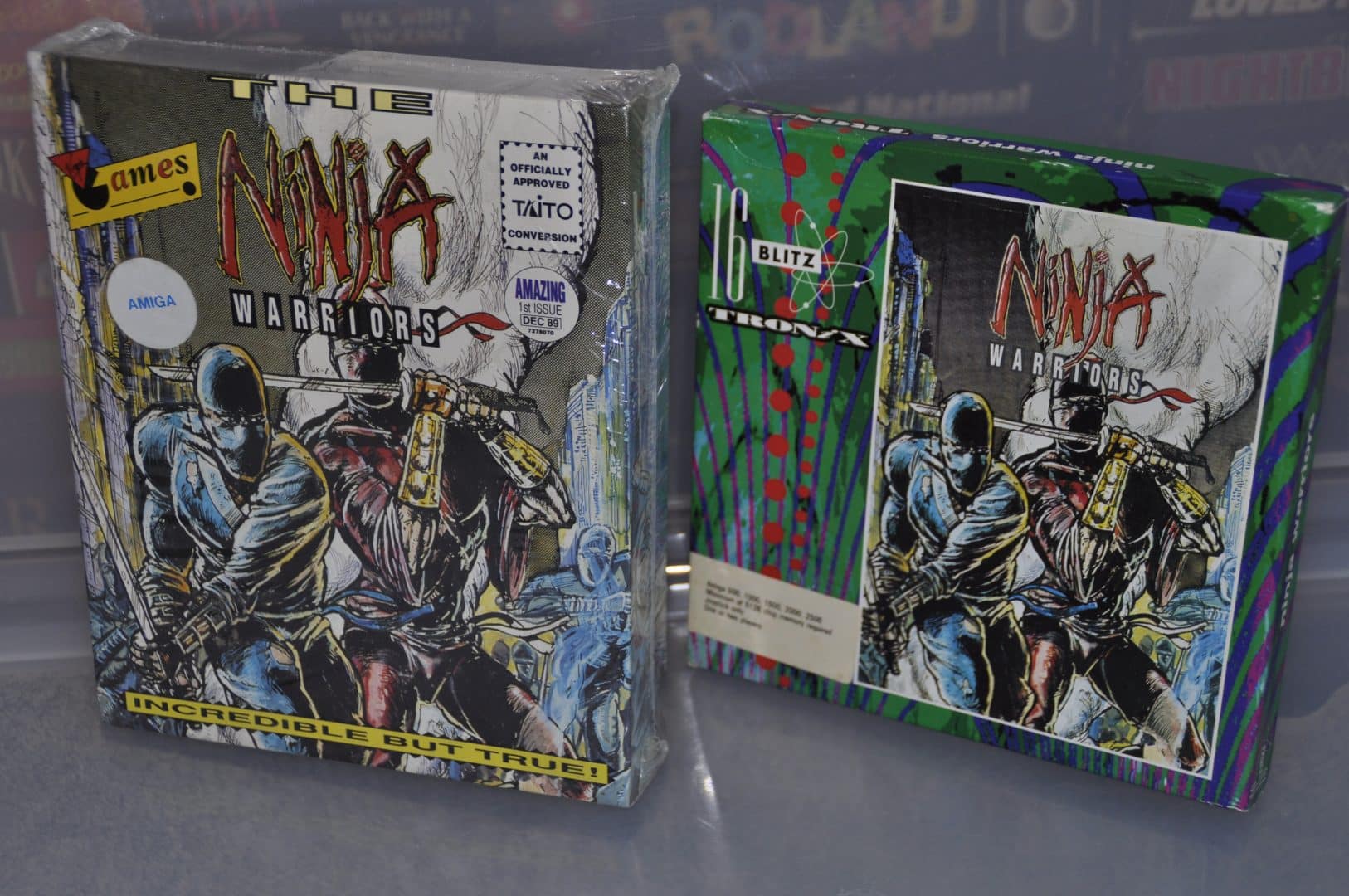 I bought the Budget version first (the Tronix one) and the sealed first release box I got many years later on a sale, luckily I never opened it as it looks absolutely gobsmacking even today with the seal on. 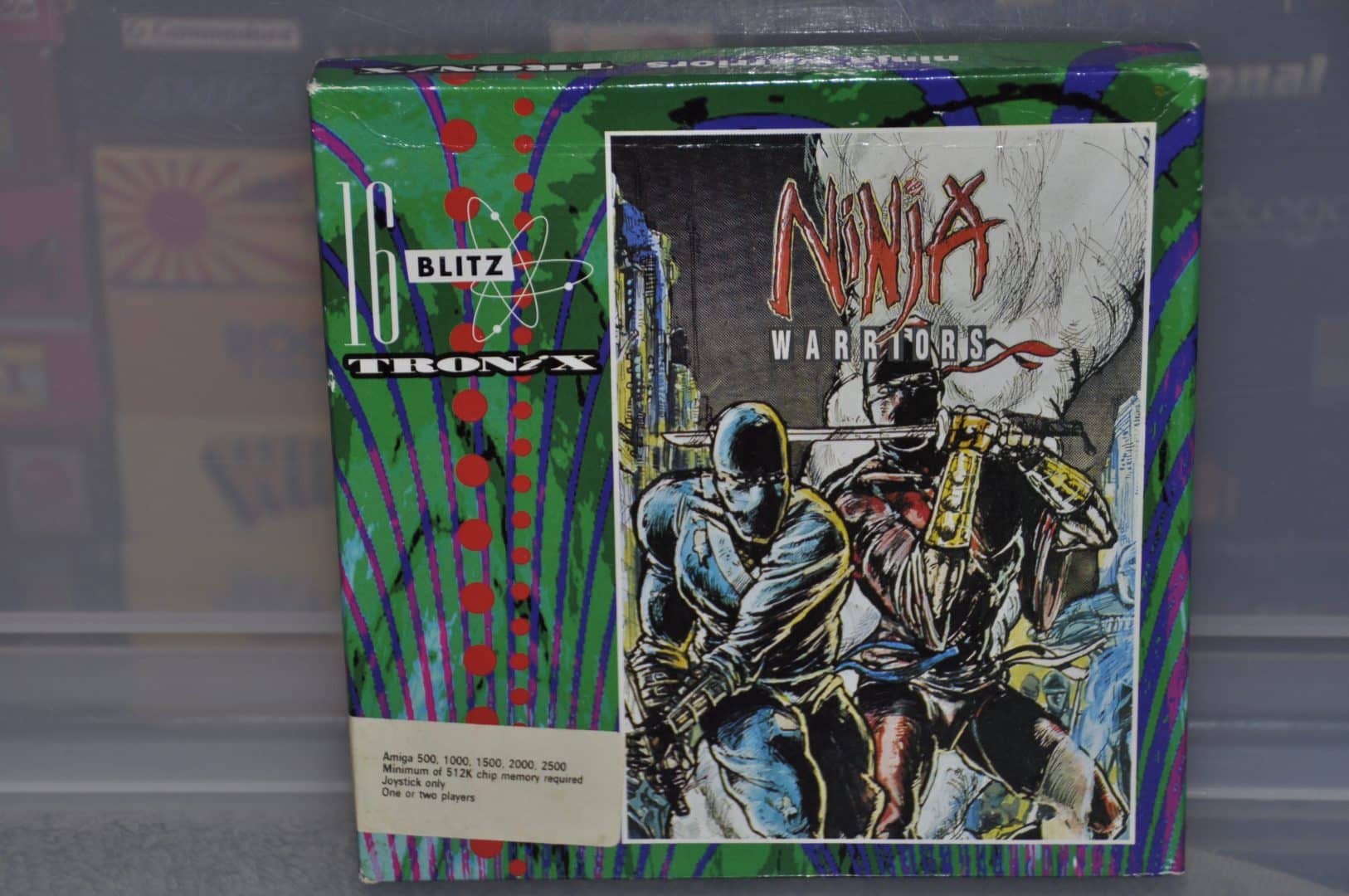 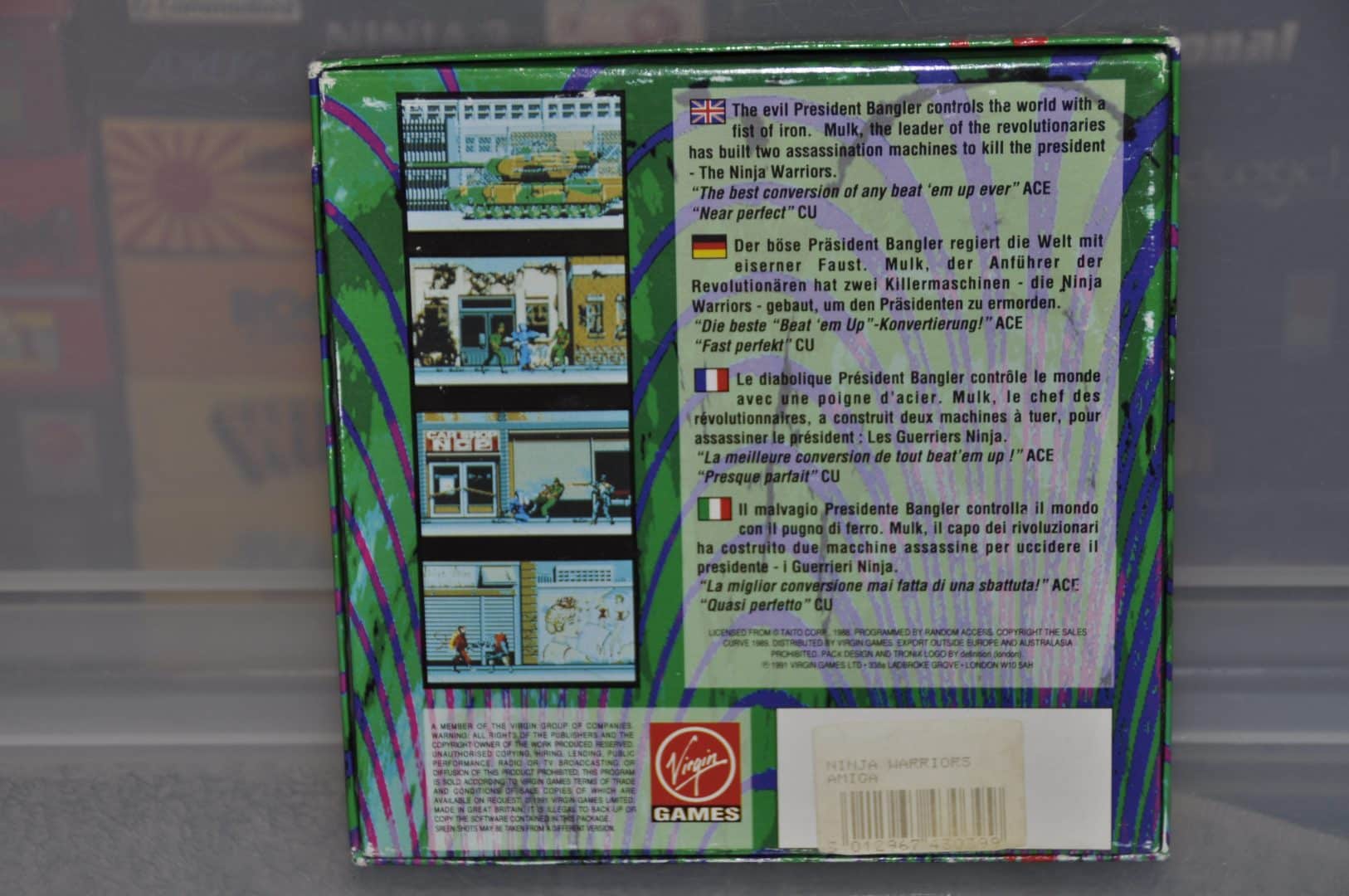 The 16 Blitz Tronix line boxes might not be the best-looking budget boxes out there but it still manages to look rather special nonetheless thanks to this particular game box. 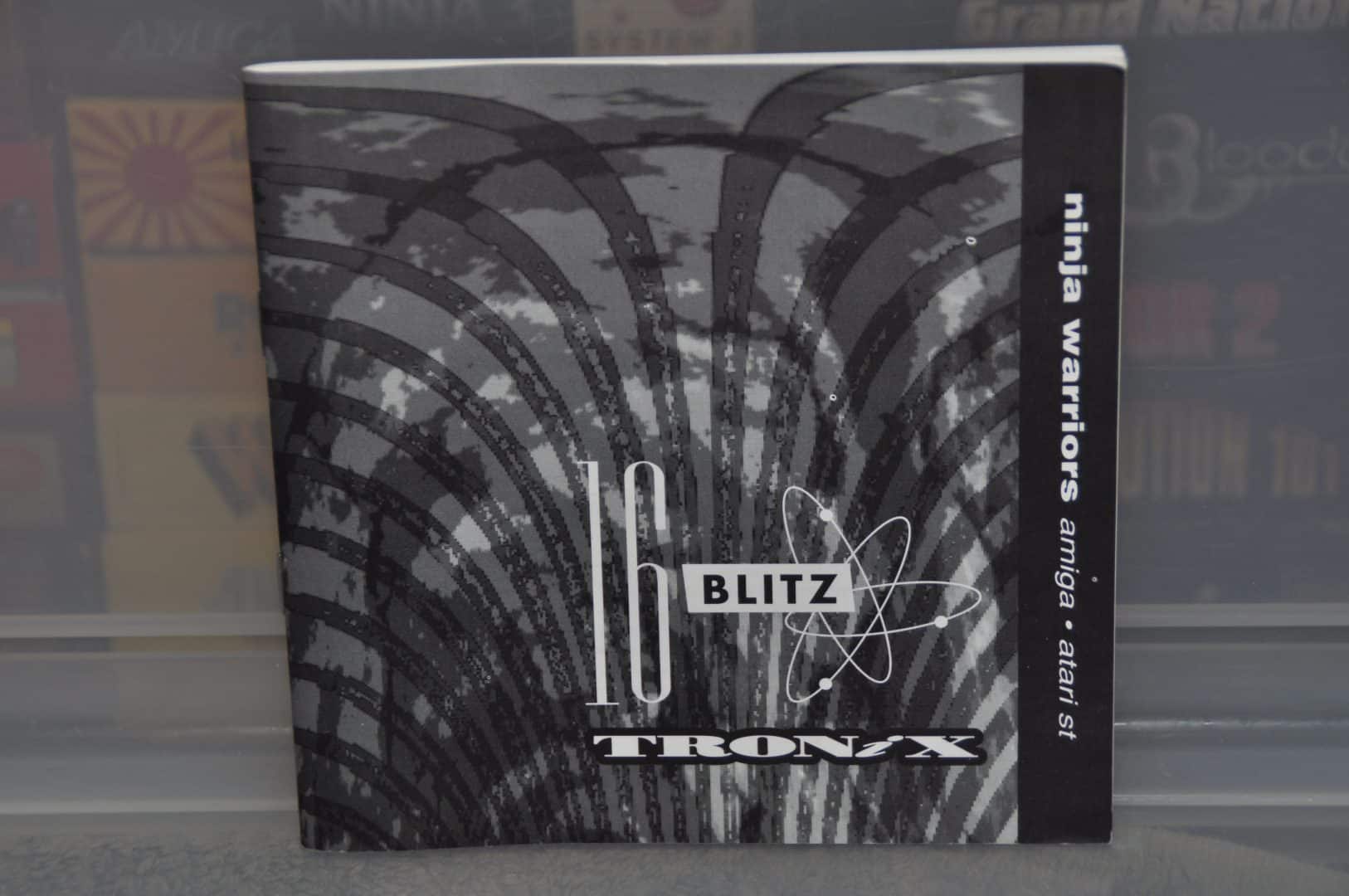 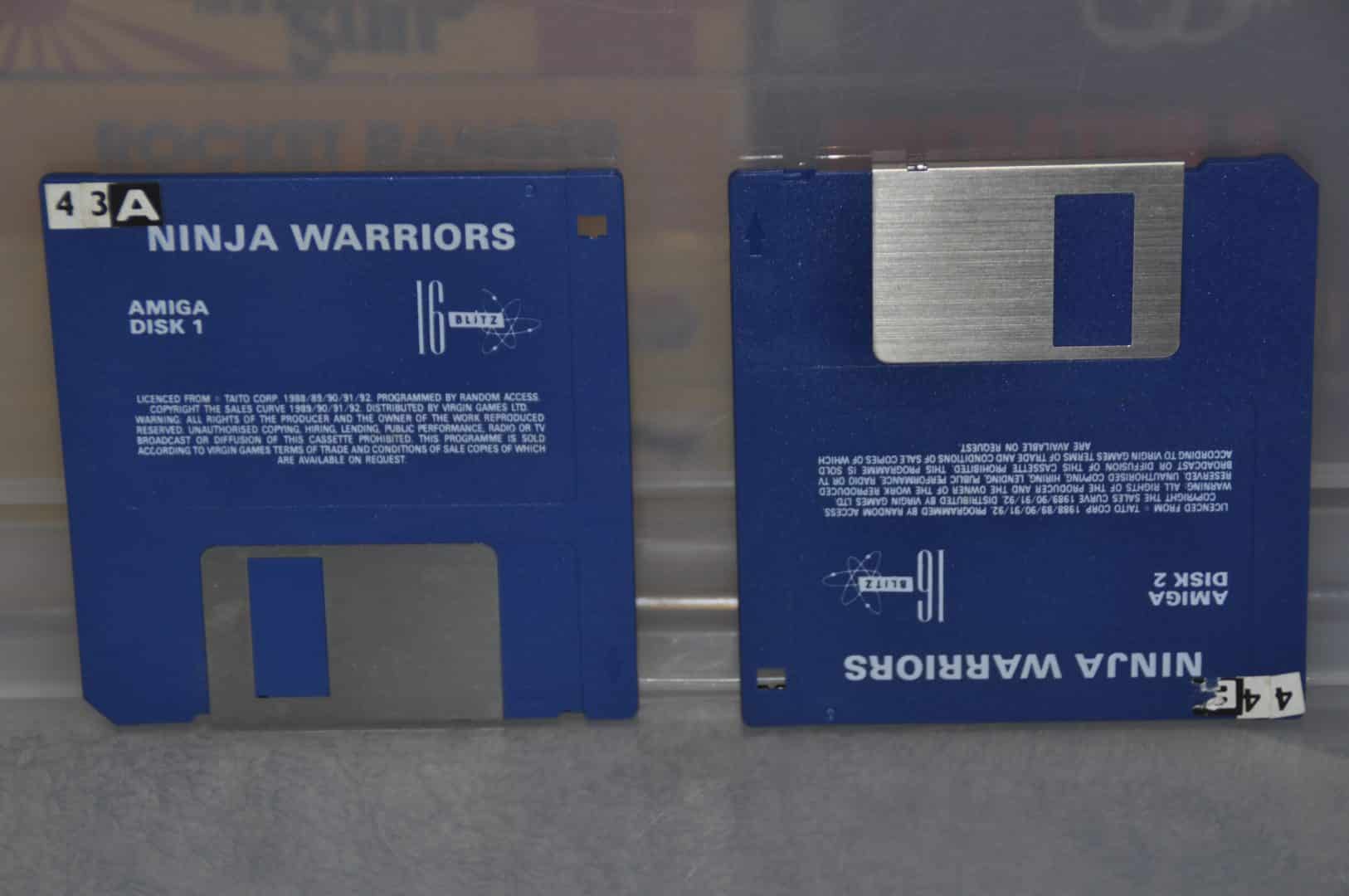 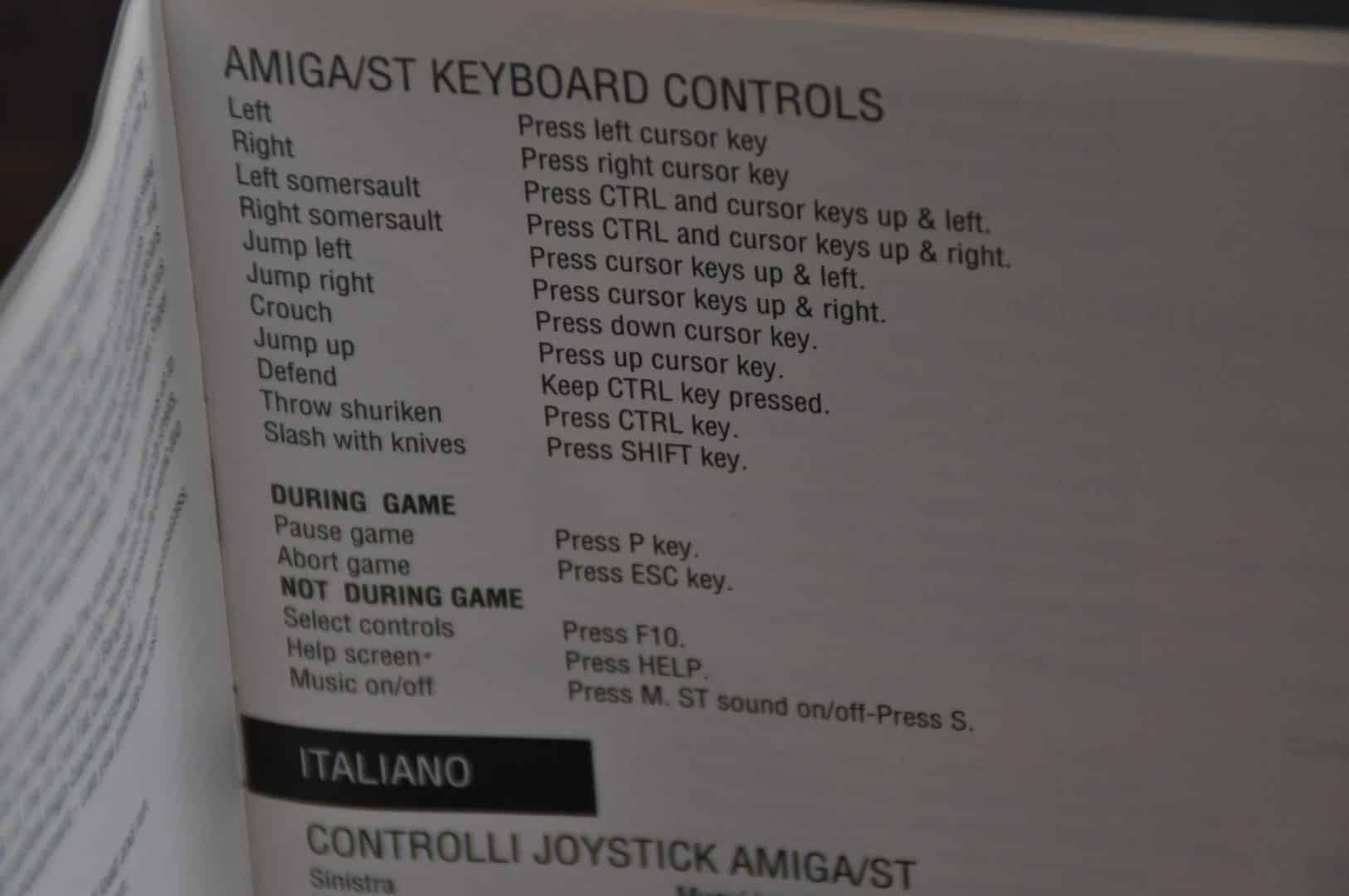 An interesting thing with this manual is that it says the game got in-game music and can be toggled with the “M” button, sadly this ain’t correct. 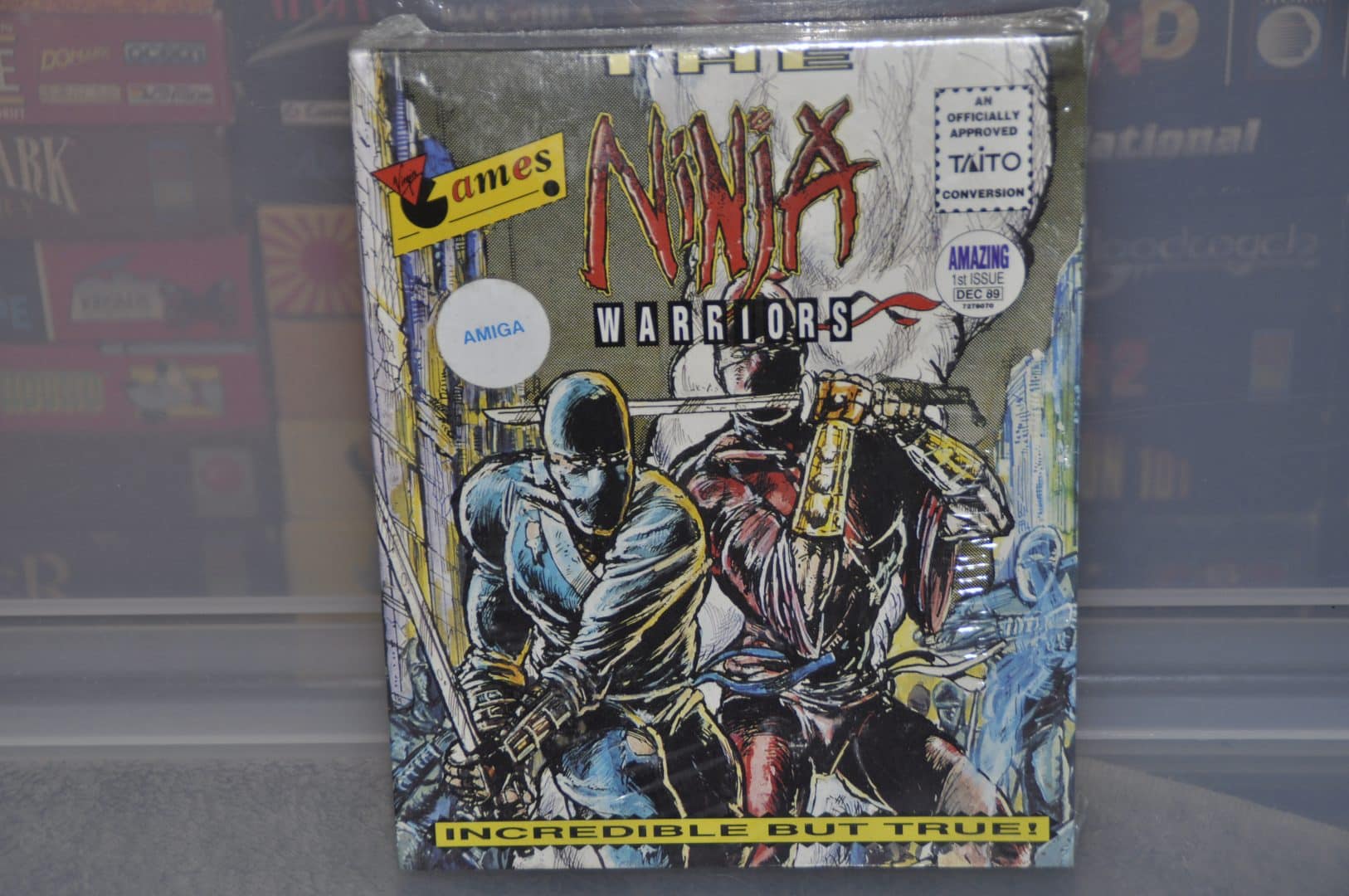 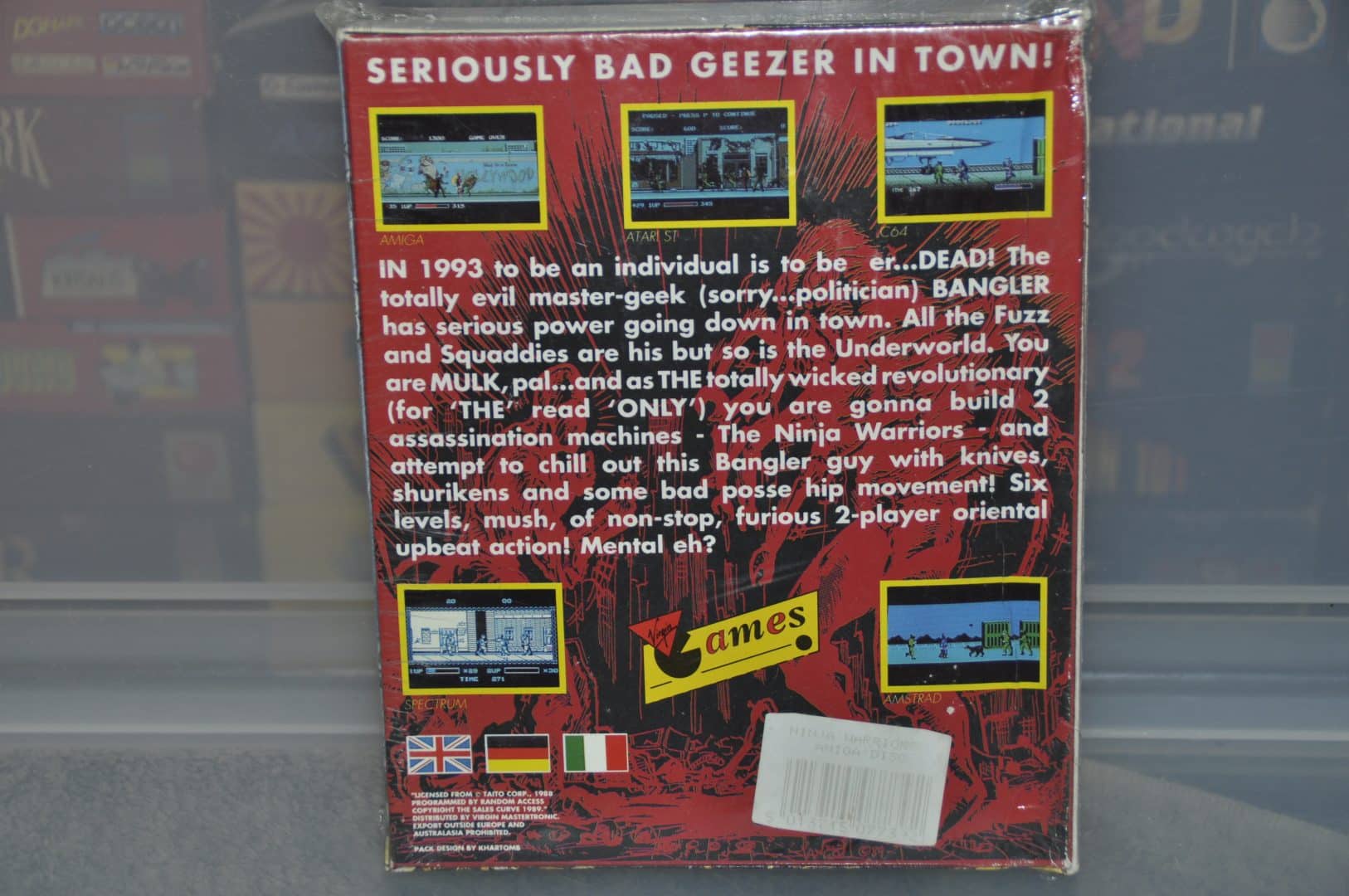 The original box release of The Ninja Warriors might not look all special but it is one of those boxes that you just can’t stop looking at even though it ain’t brilliant or whatever.

I must admit that I want to look inside the box but then again I don’t want to break the seal.

The Ninja Warriors on Amiga was and still is utterly brilliant in my humble opinion, it is a classic and one that many forget about when they talk about good arcade ports on the platform. The focus on SFX+In-game music has been quite a hot topic over the last 2 decades and that might be one of the reasons why this one ain’t mentioned together with Rodland, Rainbow Islands, Toki and all the other state of the art conversions on our beloved Amiga. The game itself is indeed a bit “old” in terms of both gameplay and style but it is a fantastic port of the original Arcade version whereas the music even manages to outshine it. It certainly could have been better but keep in mind that this was a 1988/89 game and the focus was still mainly at ST/Amiga parity and yes, as usual, the Amiga suffered from that. 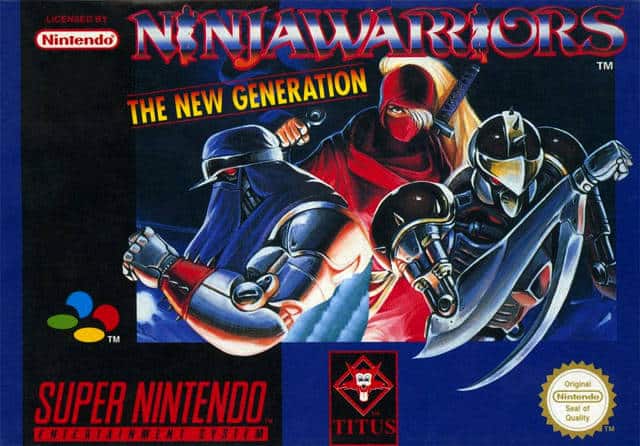 I must admit that I was already active on the PlayStation when this game came out in Europe which means that it totally went under the radar for me and I just found out about this game just recently (thanks to the remake announcement). 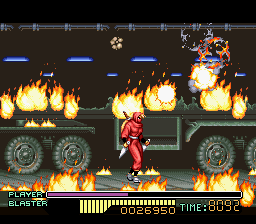 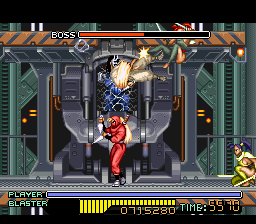 The screenshots and videos do look good and it does scream console quality but the original look and feel are gone for some reason, I mean, as a game on its own this was most definitely a good one but as a sequel, I really struggle to see the connection beyond the use of the original logo and name.

Long gone is that crude and gritty industrial (errm) look and feel, everything feels so much more cartoonish and almost like if it was a totally different franchise…

Oh and yes, long gone is the awesome music too.

So, all the good stuff from the first game (or at least the stuff we thought was good back then) is gone now more or less and they replaced it with huge characters and loads of colours and a totally new style.

I guess they had to do it to make it more attractable to SNES owners out there, but I wish they had just called it something else or just put a number behind it…

The Ninja Warriors Once Again… The remake of the SNES game:

OK, now over to “The Ninja Warriors Once Again” which most likely sounds amazing in Japanese. 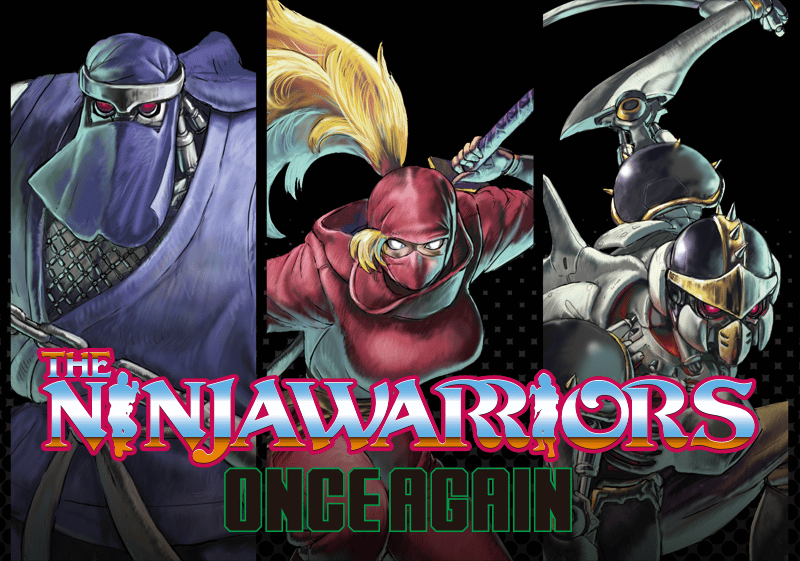 The style and graphics seem to have translated well onto today’s hardware and the game looks more attractive now than ever before, it looks like a proper Arcade game from the past and as seen in the video below, the developer even put up machine stands ala arcade cabinets at last years Tokyo Game Show.

While nothing from the game we all know (Amiga and Arcade fans) is here I can say with ease that this looks like a rather brilliant remake and a worthy game for all of the fans genre, heck, yes even for fans of the 1987 game.

The focus and attention to detail for this new game seems rather good :-p

I just had to include that titties evolution *.gif there, normally these things do go by unnoticed, and to be honest, I never thought of the robot as a “she”, I guess this is one of the things that I never shed a single thought about back in the day, Ninja’s to me have always been males… OOPS:-p

That said (still blushing here btw), I did notice that it was a “she” in the SNES remake/sequel tho.

The PlayStation 4 version seems to run in 60 frames per second and thanks to the higher resolution it now feels more like the original in terms of how far you can see in front of your character (see picture above: SNES version on the left and the new remake to the right).

I am really looking forward to this new game and I hope to play through this one with a friend in Co-op, either online or offline thanks to the wonderful PlayShare feature on the PlayStation 4 (where you can play any game in Co-op over the internet).

Have a look at the video below, be prepared to open your wallet once again as the Guru has spoken.

Thanks to Hall Of Light for Amiga screenshots and thanks to Ninja Wiki for SNES pics, the box shots are from my own collection.

Follow Us... Inspire Us To Get Better... Keep The Flame Alive
Super Mario Bros. Out Now For The Commodore 64 Bugs Must Die. Full Game Review

One thought on “The Ninja Warriors Are Back – Once Again”