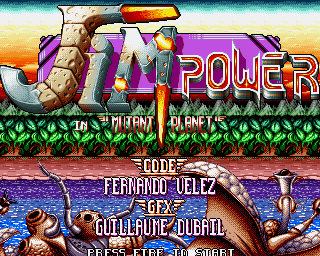 Jim Power might be one of the most memorable Amiga 500 classic for me, a game one either love or hate and i always loved it more than i hated it as everything is so damn good with this game.

The Music by Chris Huelsbeck is timeless, the music makes you want to play the game over and over but a lot of people never got the chance to hear all of it as the game has some insane difficulty spikes.

Jim Power is a hybrid game really and unlike many others which tried the same route, this one manages to hold onto the quality and making all variations unique and a pleasure to play.

You have everything from normal Run’And’Gun platforming and there are vertical shooter levels as well as horizontal shooter ones.

I have taken the liberty to include a sample of the music here and just to have it said, the Amiga version is superior and while TurboGrafx used CDDA it still ain’t anywhere near the Amiga sound.

The map screen, lots of people never got past the last level (the tunnel in the bottom) and i was one of them until 2 years ago (and i played it a lot since the release in the early 90’s), a very unforgiving game at certain places and just before the end there is a semi glitch place… AAAAAARGH!. 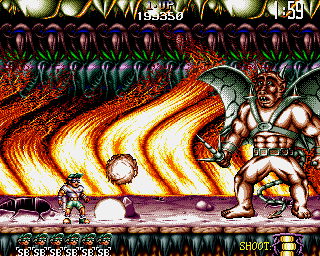 Looks wicked even by today’s standards, 7(?) levels of parallax scrolling, the insane amount of colors and varied design makes this one heck of a looker for an A500 game.

There is not a single slowdown what so ever to be seen in the game!.

Not many games around like this one, yes it is a platformer and those came more or less out every week from the mid-80s to mid-90s indeed but its somewhat distinctive about the actual gameplay.

As seen in this screenshot, its a boss and this is one of the boring ones but look below for 2 amazing ones.

So this is one of the first bosses you meet, its incredibly fast moving and it opens up on the middle (the whole thing split up on the middle) revealing the place where to kill it.

Had to grab these 2 boss picture from MobyGames, didn’t find a better source and grabbing these very fast moving boss levels in E-UAE proved to be quite hard. Very lame of me to use different resolutions on the pictures but…

Every level makes you want to play it again just to see whats next, that was one of the good things of the era, unlike today’s games where it’s basically the same design you see all way through.

(Picture on the left side) Bad hitboxes will make you scream on this very level, you have no idea how many times i saw this level before i actually managed to get past it.

I could have cheated and used infinitive lives or whatever but i am 100% against such things as they break the games in my opinion (cheats).

Also after so many years, it all turned into a principle that i just had to complete it on my own without cheats and the funny thing is that even if i have completed it now i still want to do it again and i still don’t want to use a level trainer or such.

(Picture on the right side) This is a level you will see a lot as it’s the first one, hard yes but fun and rewarding!.

This is approximately the place where you get proper weapons so make sure you don’t die here or whatever hehe.

Notice how it’s 4 floppies? , well a friend named Chris Vella sent me his 2 NTSC ones as i had been looking for years for a copy of the game but it was quite rare but after 2 years after i got the floppies from him or so i managed to get hold of a mint boxed version of the PAL version.

This game is still quite costly even for bad condition boxes so if you manage to spot a mint one for less than 50 British pounds then grab it!.

Haven’t tried it?, well then go and do it right away because of you’re into games and like retro then this is one of the first stops you need to do but make sure it’s the Amiga version you try.

3 thoughts on “Jim Still Got The Powah! – Jim Power In Mutant Planet –”