Rocketbirds VITA is a port of the PS3 version that came a few months back, it’s basically the same game with some added bling and blogs, it’s a platform Action game and eventually it turns into a puzzler too although most of the time the puzzles are very easy there was a few towards the end that made me switch the game off a few times.

So yes, Rocketbirds: HBC is a Jump’n Run + Flying with a jetpack in the clouds bit and a game that forces you to think how to get to the exit.

There’s quite a lot of action in the game and with that comes blood!, enemies respawn too so if you want to make the screen go red then you can do it although i won’t recommend it as ammo can be hard to find in the game(towards the end especially).

There are some nice cutscenes and voiceovers in the game and they have copied ideas and concepts etc from other games, just look at the picture above, that pic is from a cutscene (video) where you pick up a weapon (pistol in this case)… Most retro gamers can spot which game that idea came from it within seconds, ok i will give you a hint. Eric Chachi’s Another World/Out Of This World from 1991.

Some nifty visual effects in the game but most if not all of them get shadowed by the “dark/grey” design but the humor is still intact and you do get the occasional giggle every now and then and at other times you will “lol” if only for a second.

Another cutscene shot , as you can see this game ain’t a colorful, bright nor a happy land, its grey and dark and full of blood and violence..a bit like the middle east i guess (and i do have a feeling that there’s a lot of cocks there too… and most of them carrying an exploding barrel…). 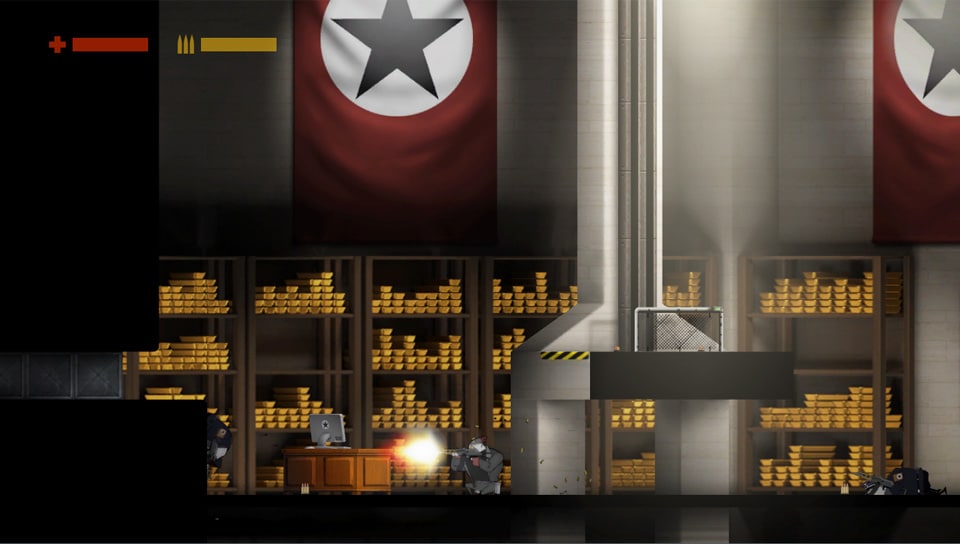 It’s almost like if the game was designed to have a “swastika” on the enemies but was removed in the very last minute… btw, the barrels seen in this shot is rocket packs and not bombs but if you shoot a fueled rocket pack…well, it makes the same sound and people die.

Ok so here is the evil boss’s transportation vehicle, guessed what it is?, yup a Luftwaffe (Zeppelin) and do you know what one of the trophies associated with destroying the blimp is?… Hindenburg!.

But hey! , don’t get me wrong, they didn’t call it Hindenburg (thank god!) but they merged the name Hindenburg with a McDonalds Chicken burger so the name of the trophy is: HINDENBURG.

I have not been in a zeppelin from WW2 but i bet this is just how it looks, except the cock and clones that is… i hope.

Look!, a colorful and bright picture, it’s one of the zeppelin’s that explodes.

The game is littered with witty jokes and mockery of movies and world history, no matter how much you hate the game the jokes will make you smile a bit for sure.

Ok, now this picture made me think hehe, btw this is towards the end of the game and it’s getting more and more colorful and bright which i guess is what they wanted to do and somehow pulled it off (start of grey and depressing and went to bright and colorful). 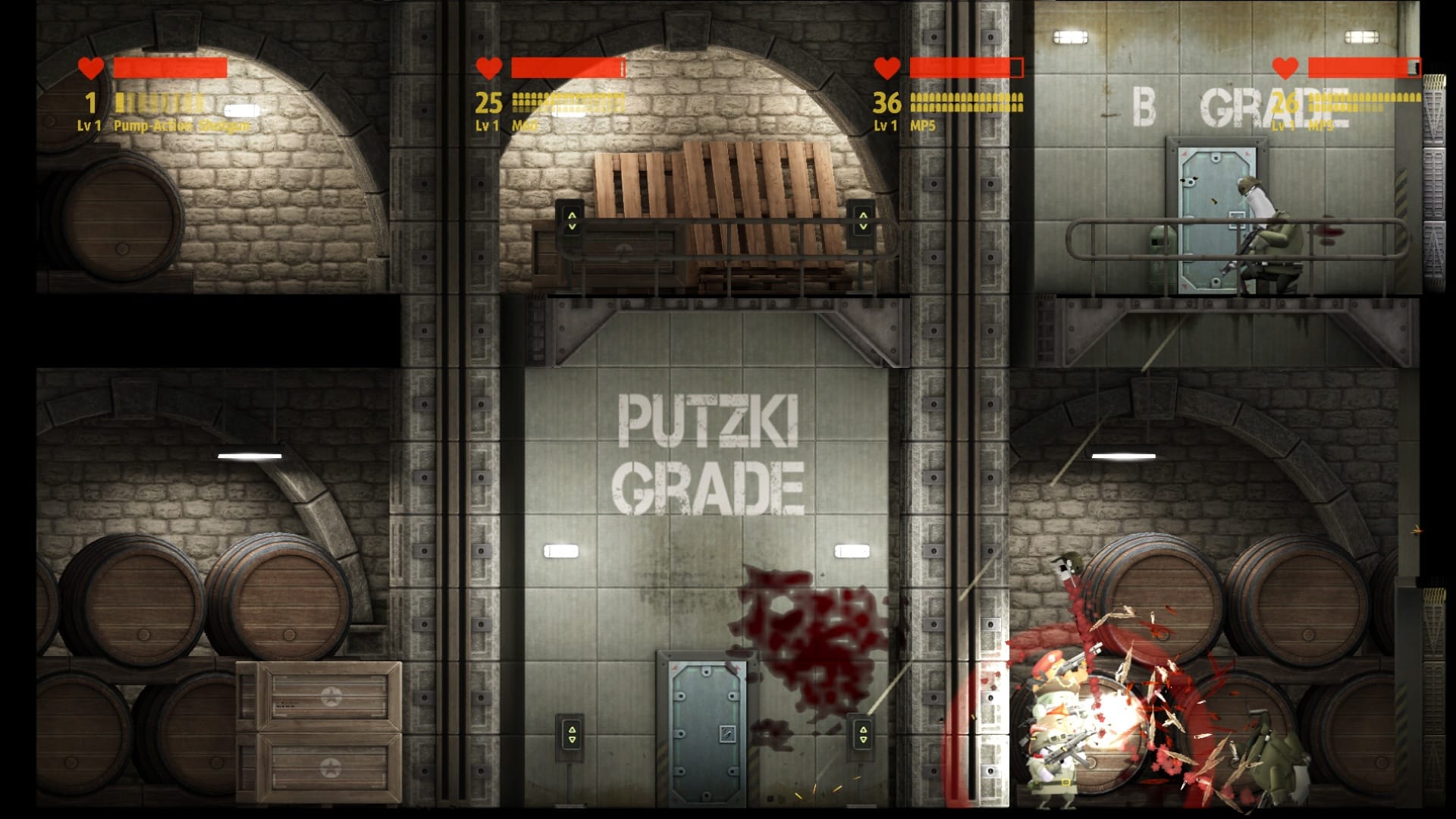 Rocketbirds is a very reasonably priced PSN game, its long and its crammed with features as well as Co-Op campaign MP (not identical to the SP campaign) and i have yet to try the MP but i did spend a lot of time on the SP and i did complete it in the end although i nearly gave up due to some laser puzzles towards the end of the game but on the whole it was a decent game and timewaster for me.

Levels can be very long and checkpoints far between but still manageable in short bursts as the battery and sleep mode on the Vita is very good. (Rocketbirds manages to use very little power for what it does, unlike some small Vita PSN download games which drain the battery faster than for example Uncharted.)

Rocketbirds 2 is on the way and i will buy it for sure (if it comes on VITA that is) but i have yet to buy the PS3 version as i don’t know if that will be played at all as this is kind of a game that is better played “on the go”. 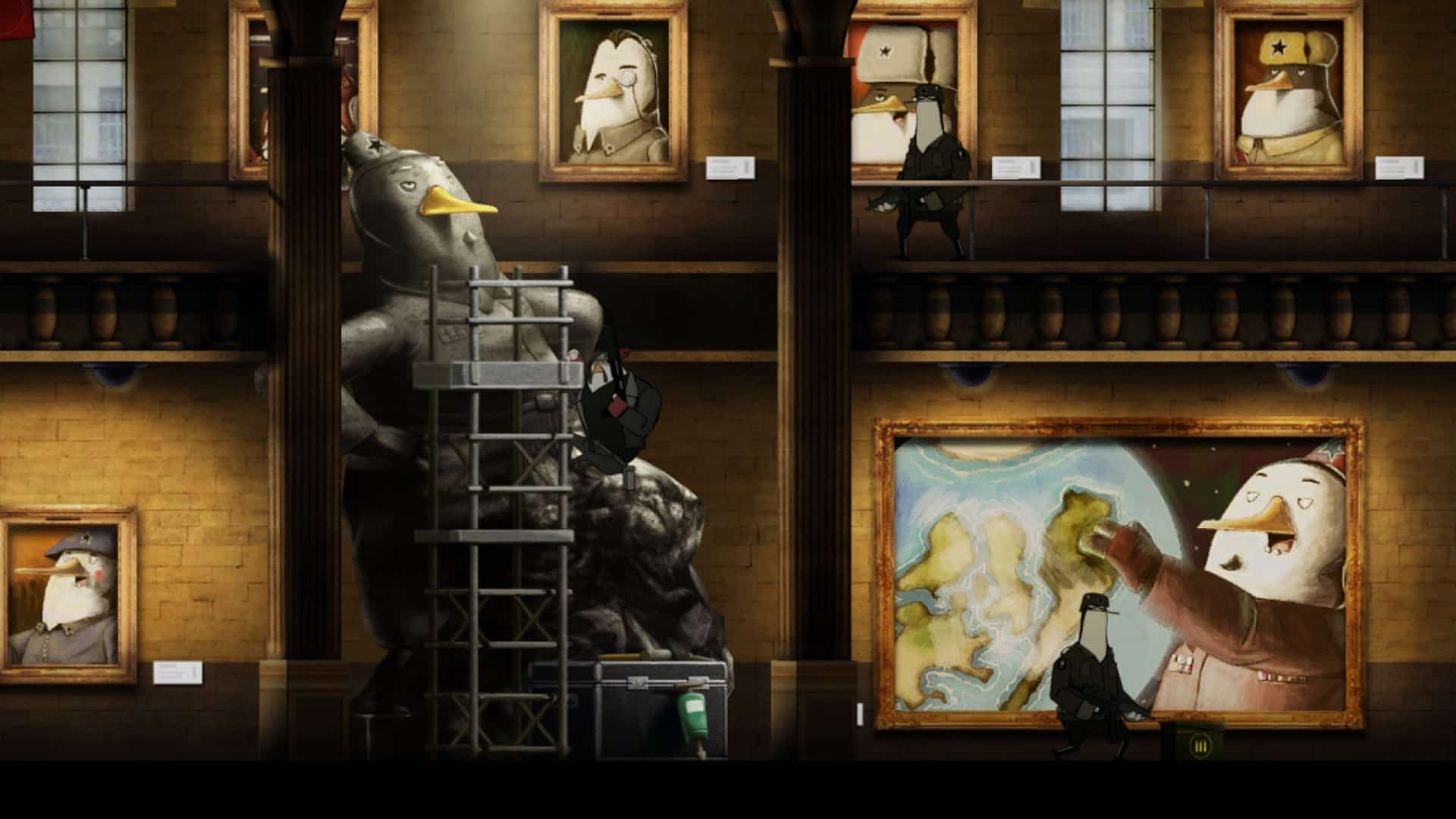 A decent game if you’re into a game with decent graphics and varied gameplay but you might get cramped fingers if you’re not using a Vita controller handle (i always use one as then i can play for longer sessions without getting cramps or whatever). (the one pictured below is the best one by far).