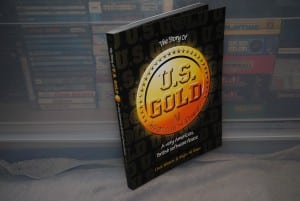 Do you remember the book about Ocean, believe it or not, that was half a year ago? It feels like it was last month or something.

This review is about another game company from the 80s and 90s called U.S. Gold. There are some connections between the two actually and that is Coin Op/Arcade machines ports, the book is written by the very same team too as the Ocean book, Chris Wilkins & Roger M. Kean.

Many of you probably remember the developer/publisher from games like Beach Head, Out Run/OutRun, Forbidden Forest, Street Fighter II and many, many more.

What many might not know is that Ocean and U.S. Gold was co-operating for a while and that Tomb Raider was developed under the U.S. Gold by CORE (of course) era before eventually, Eidos Acquired U.S. Gold. 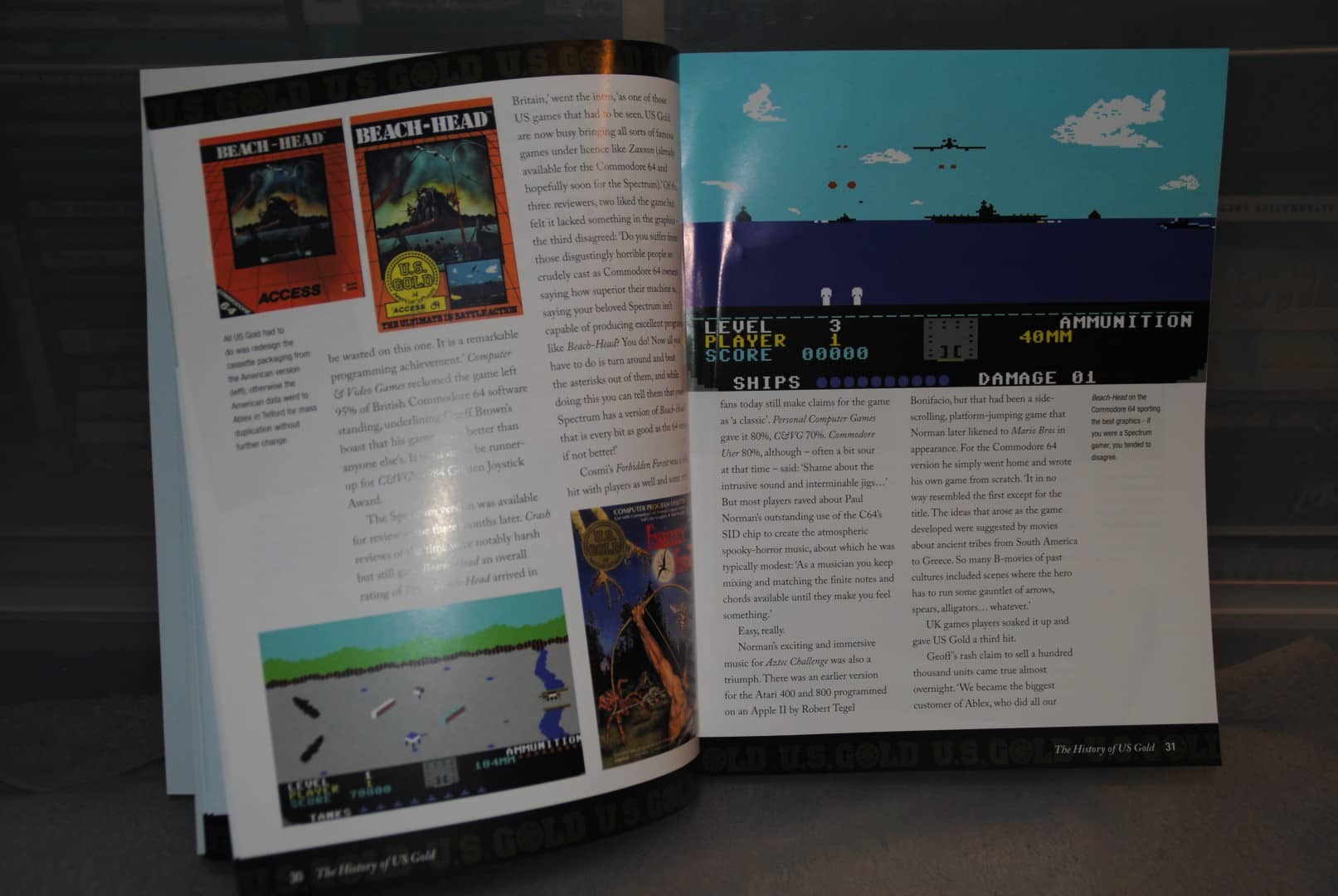 U.S. Gold published and developed several hundred games in the mid-80s alone and i have tried to find out how many they really did in their lifespan but that has proven somewhat difficult to do/find.

The first time i saw Beach Head is a day i will never forget, it amazed me so much that we stayed up all night at a friends house playing the game and being a dick as he was he refused to let me copy it or even loan me the game. It took a while before i managed to find the game elsewhere but by then Beach Head 2 was released, and it was fun to tease him with it, and i did the opposite of what he did to me, and that was that i loaned him the game and i eventually copied it for him as well. 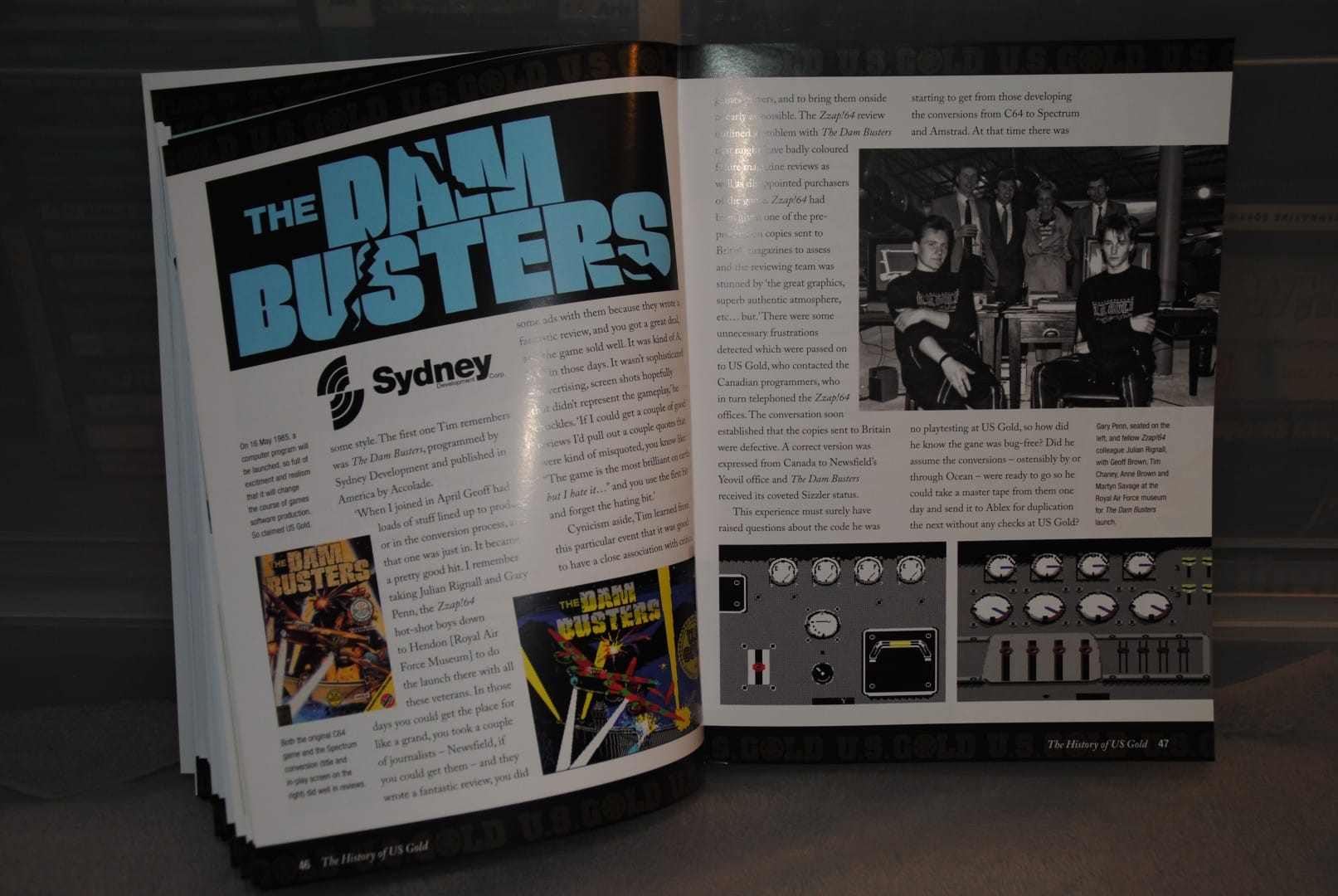 If there is one thing about the 80s then it has to be the crazy amount of games being released ,and with that came the fact that i missed out on a gazillion of them, seeing the pictures in this book has been a journey back in time and have teased me more than i thought it would. I fear that i might have to get a C64 again just to relive the golden years. That said, i could always install VICE on my Amiga, and play them there, good idea i think and maybe best of all is that i have a Catweasel and a sid chip for it. 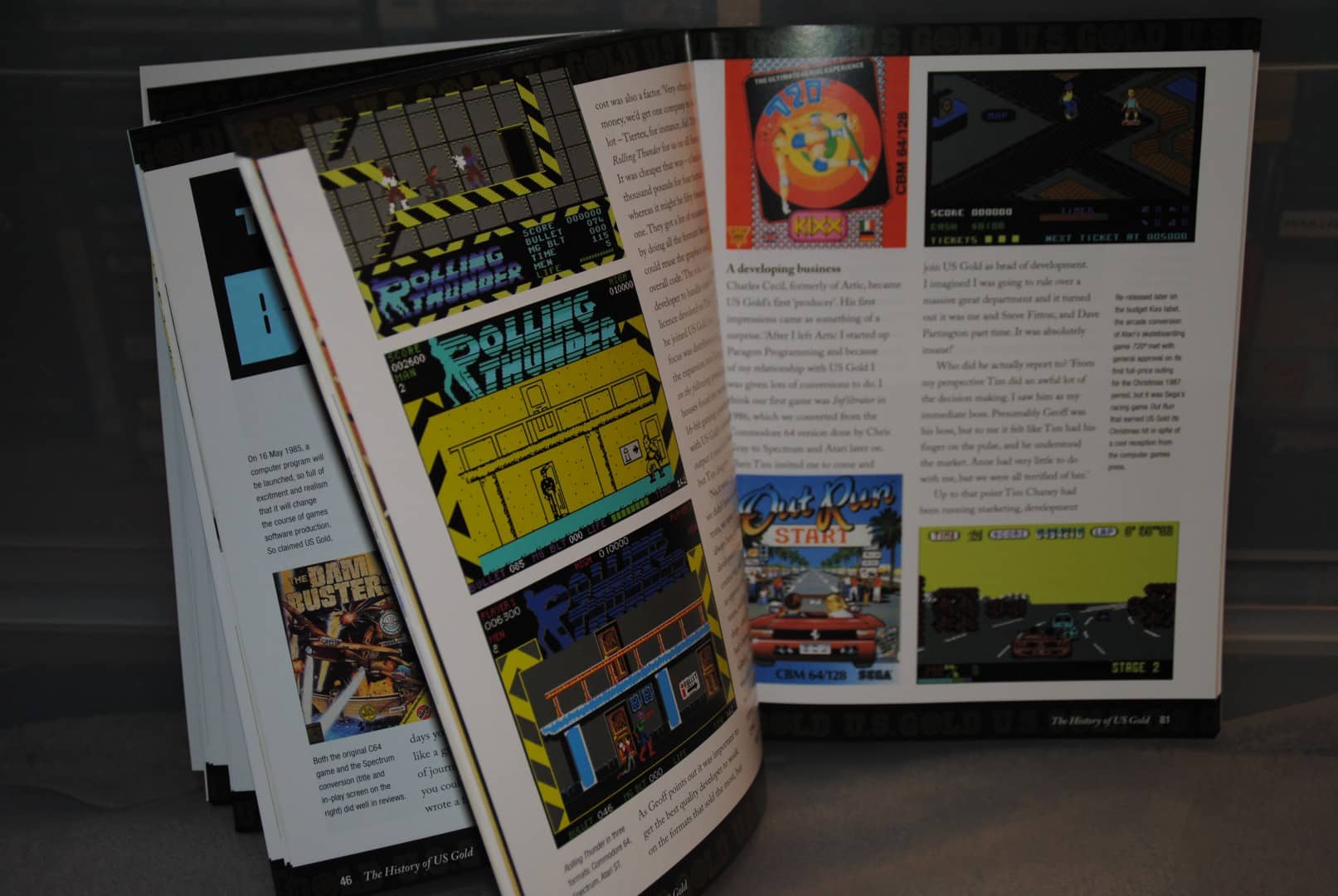 The book is designed and laid out quite identical to the Ocean book, which is a good thing as the design there was one of the best things about the book. This U.S. Gold book does feel a bit more “crammed” with more pictures and even more comparisons between formats. I guess many of the gamers out will confirm one thing about U.S. Gold, and that is the variety of quality of their ports between formats.

U.S. Gold had a crazy amount of games published throughout its lifespan, and many of those where totally pants on many of the formats. Amiga had a fair share of horrible ports over the years and i would put U.S. Gold and ATARI near the top of the list, if not on the top.

Rolling Thunder and OutRun being prime examples of how crappy some of their ports turned out on some formats.

Say what you want but 720″ was a good port on some formats, and even better than the arcade version. 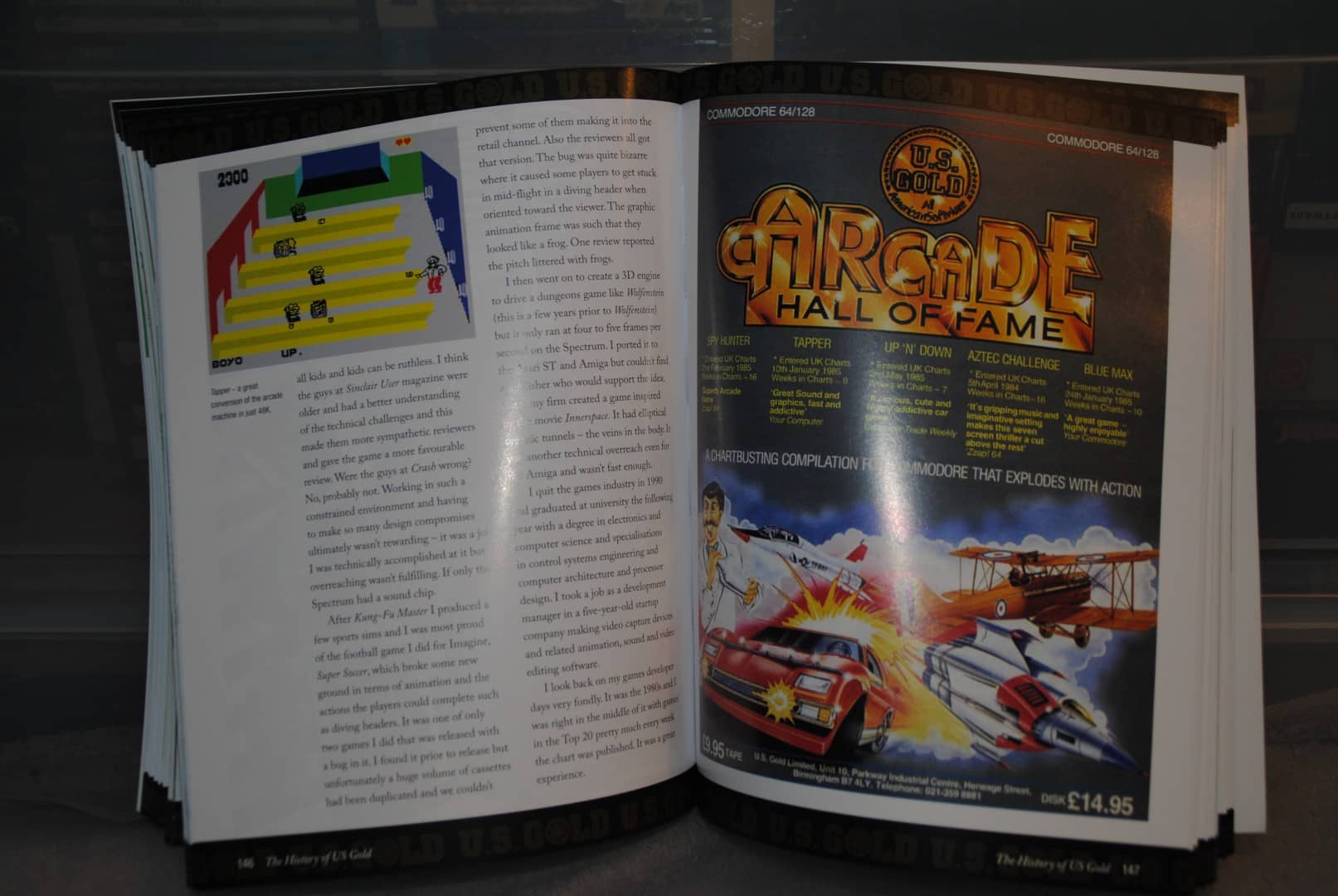 I am getting old, no doubt about it, but there are so many games out there from U.S. Gold that i never thought they made. Games like Tapper, Blue Max and Up’N’Down are just 3 out of 100’s of titles, why i have forgotten who developed and published them are down to the fact that i more or less gave a shit about that in the 80s, that is unless it said Imagine or Elite on the box. 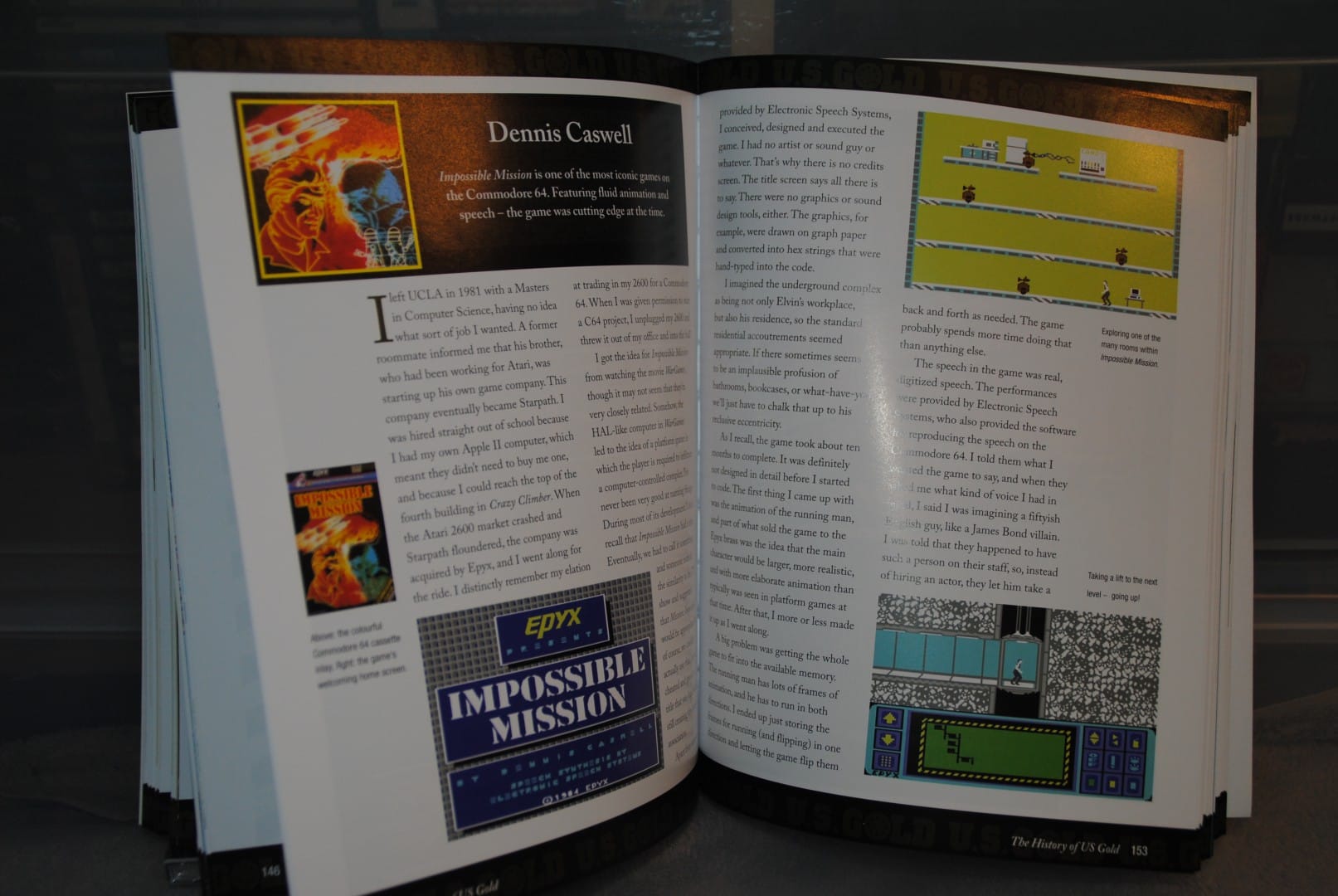 The developer profiles/interviews from the Ocean book is also in this book, a great feature for most retro and newcomers and while it may not unveil all that many secrets, it still manage to keep you interested enough to read it all. To new readers and people who never read interviews or “closed” forums from the past will find these sections valuable for sure.

What?, EPYX ain’t a U.S. Gold brand, right?. Wrong, U.S. Gold had a pretty luxurious deal for publishing in Europe. You know what? i had forgotten all about that until i stated reading this book. 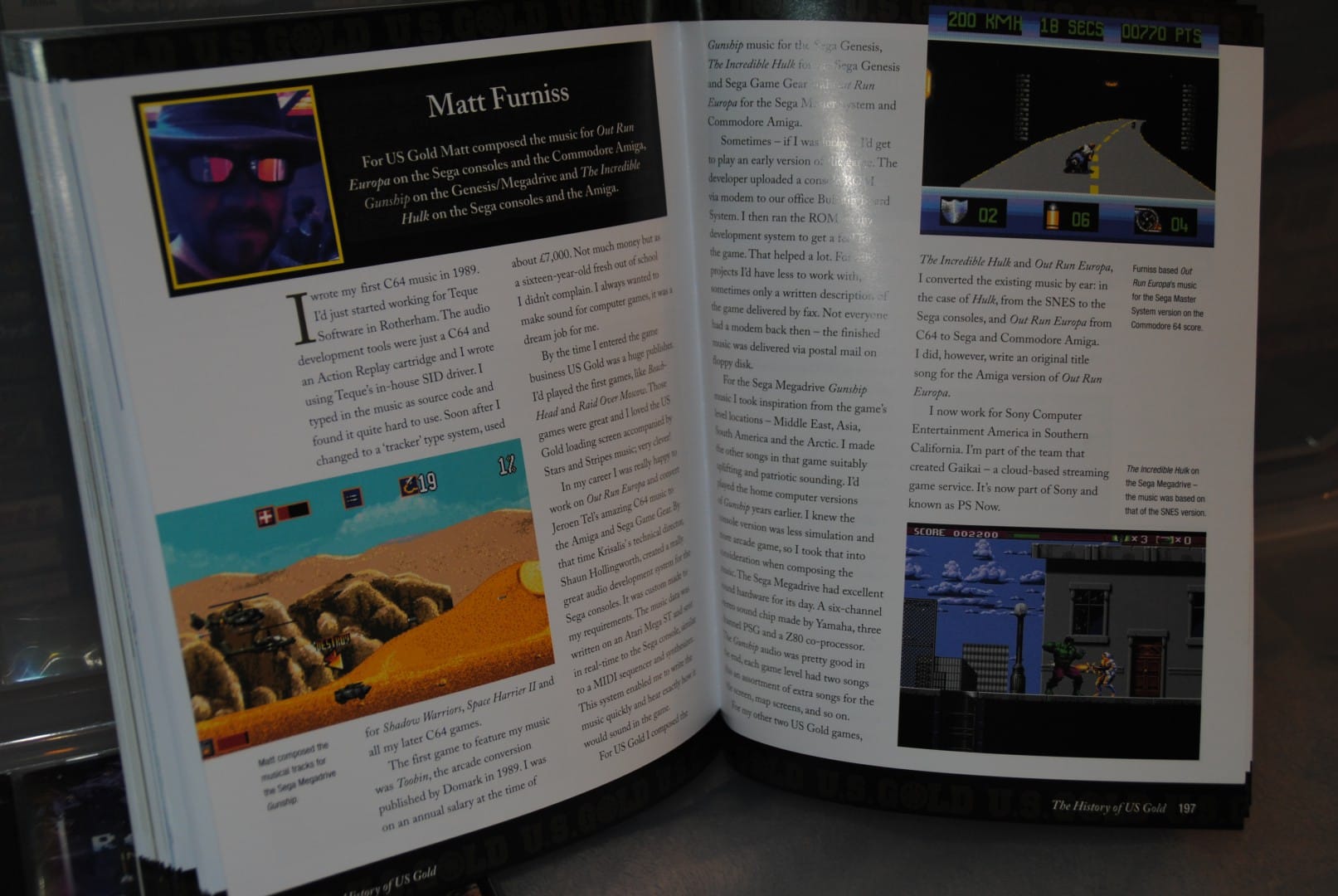 Matt Furniss (not the other one) was one of the guys responsible for the music in a lot of games and one of many in the team(s) who made U.S. Gold such a major player both as dev and publisher. I will never forget his work on OutRun Europa, Soccer Kid, Arabian Nights (at least 60 games is listed in Hall Of Light) and many more kick ass songs. 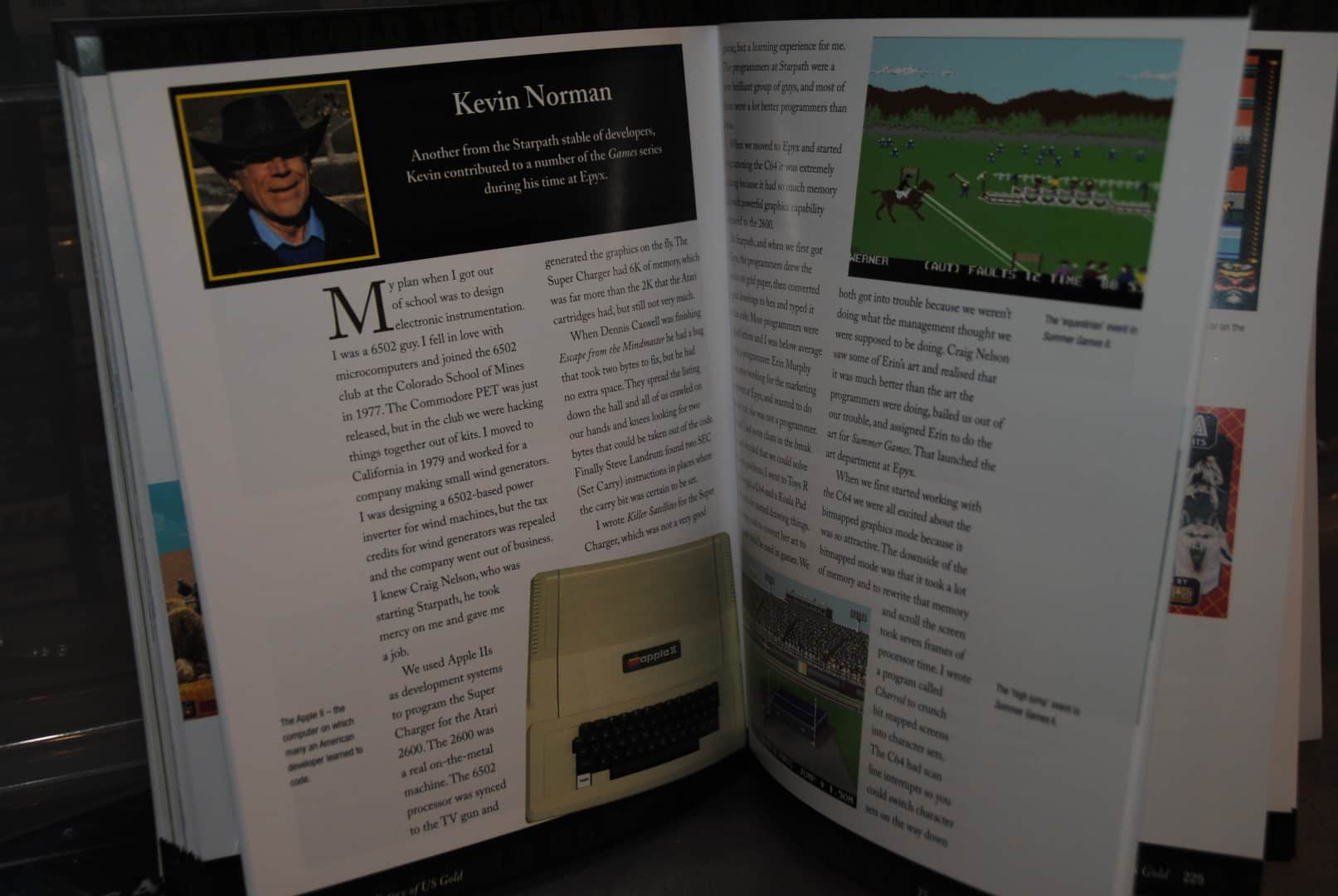 Naturally, Summer Games, California Games, The Games etc is covered more than once in the magazine. The games series to me is maybe one of the most played sports games ever in my history in gaming, yes even more than Football Glory and Sensible Soccer.

For some reason i can’t find much about World Games in the book, i need to read it a couple more times for sure as i am sure it is in there somewhere. 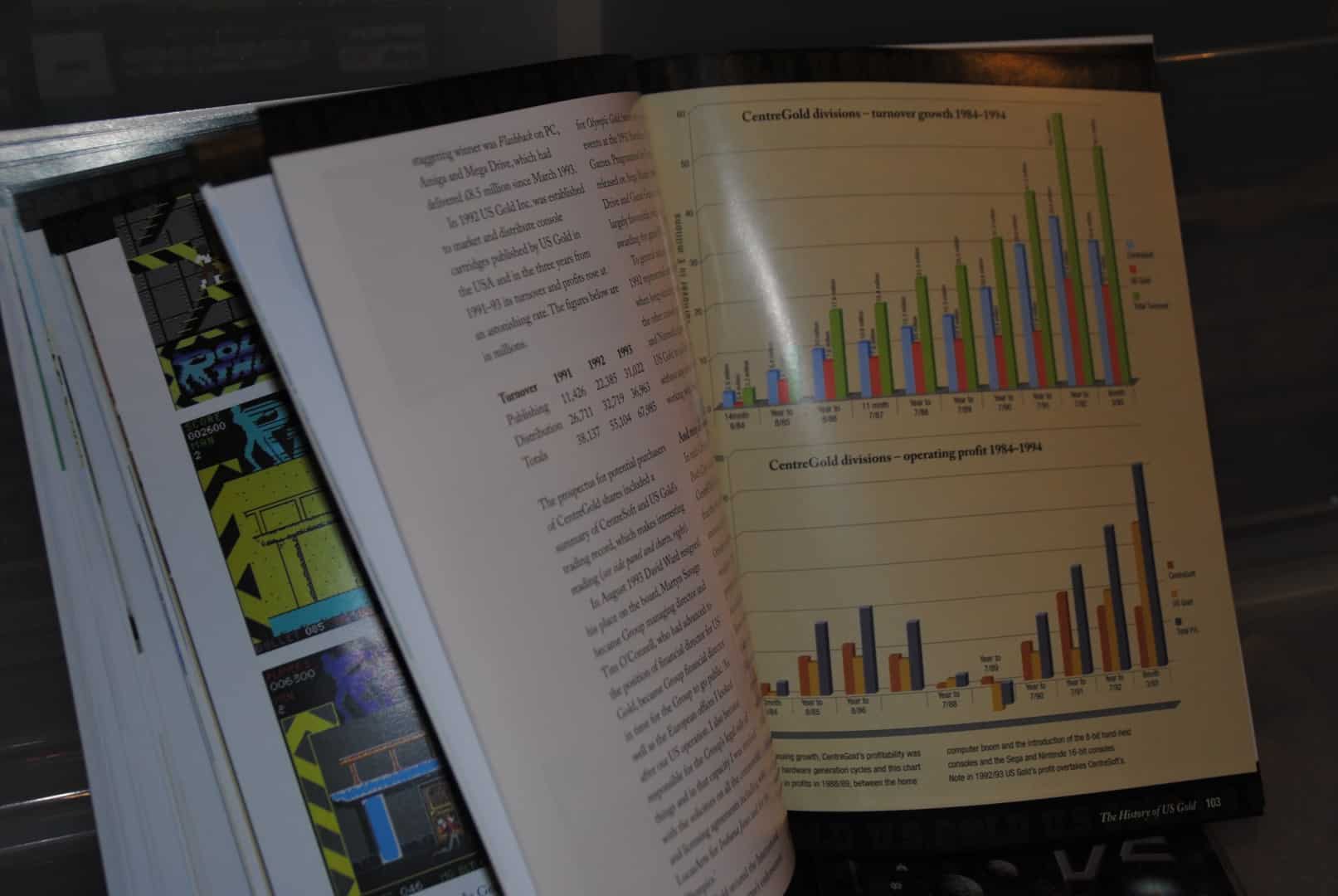 Quite interesting to see these sales numbers, in 84 U.S. Gold had a turnover at 0.4 million (pounds i guess?) and in 92 it was 22.4 million and it had a steady growth too, sadly it does not say how many games they released each year and so on as that would have been nice for comparing.

This book was funded via Kickstarter so there was naturally a bunch of deals there, sadly i missed out on that Kickstarter for some reason, but luckily there was a “Special Edition” available from the FusionRetroBooks website (link on the right sidebar).  There were a few cool items with it and it was only a few quids extra.

The Remix 64 V2 cd was one of the items, not opened it yet but i will soon enough. 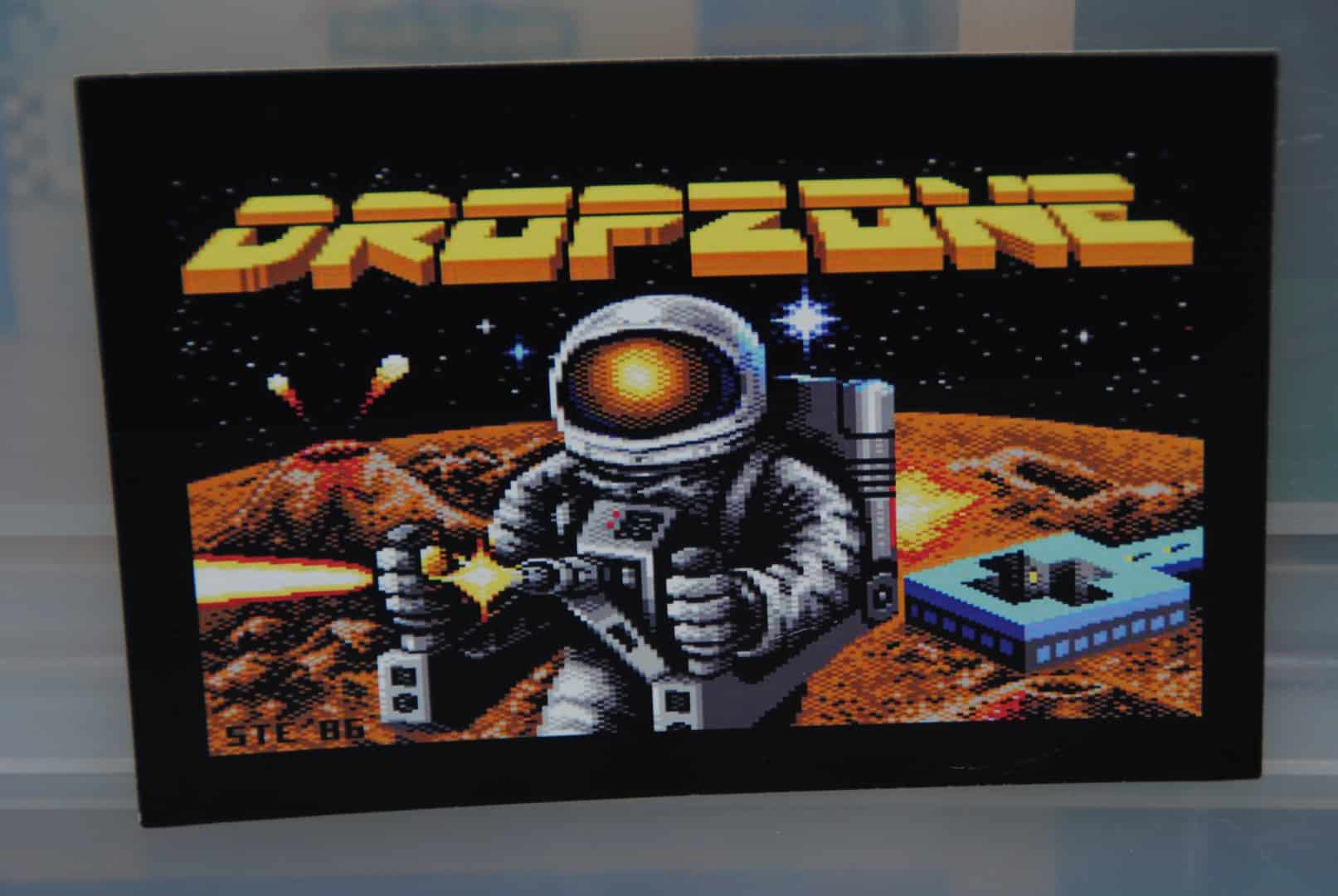 The obligatory postcard was also included, of course, this time around it was one for the game Dropzone, this game was included with one of the Kickstarter pledges and only a few were ever produced and exclusively for the Kickstarter campaign.  I will never use these postcards that i get all the time and sometimes i have to wonder if it is worth it, i mean, i think it would have been better with a lithograph ;).

A nice little pin/badge is included, colourful enough to spot and just about the right size too. Will, i ever wear it? i doubt it.  I should make a pin wall soon as i must have like a 100+ of pin/badges things by now.

The other item was a book liner/inlay or whatever it is called, Skysaga it says and it is supposedly a very good game too, but it is for a platform i do not care for so i have yet to try it. The thingy is nicely done and colourful and while i will (yet again) never use it most likely, i will still take good care of it. 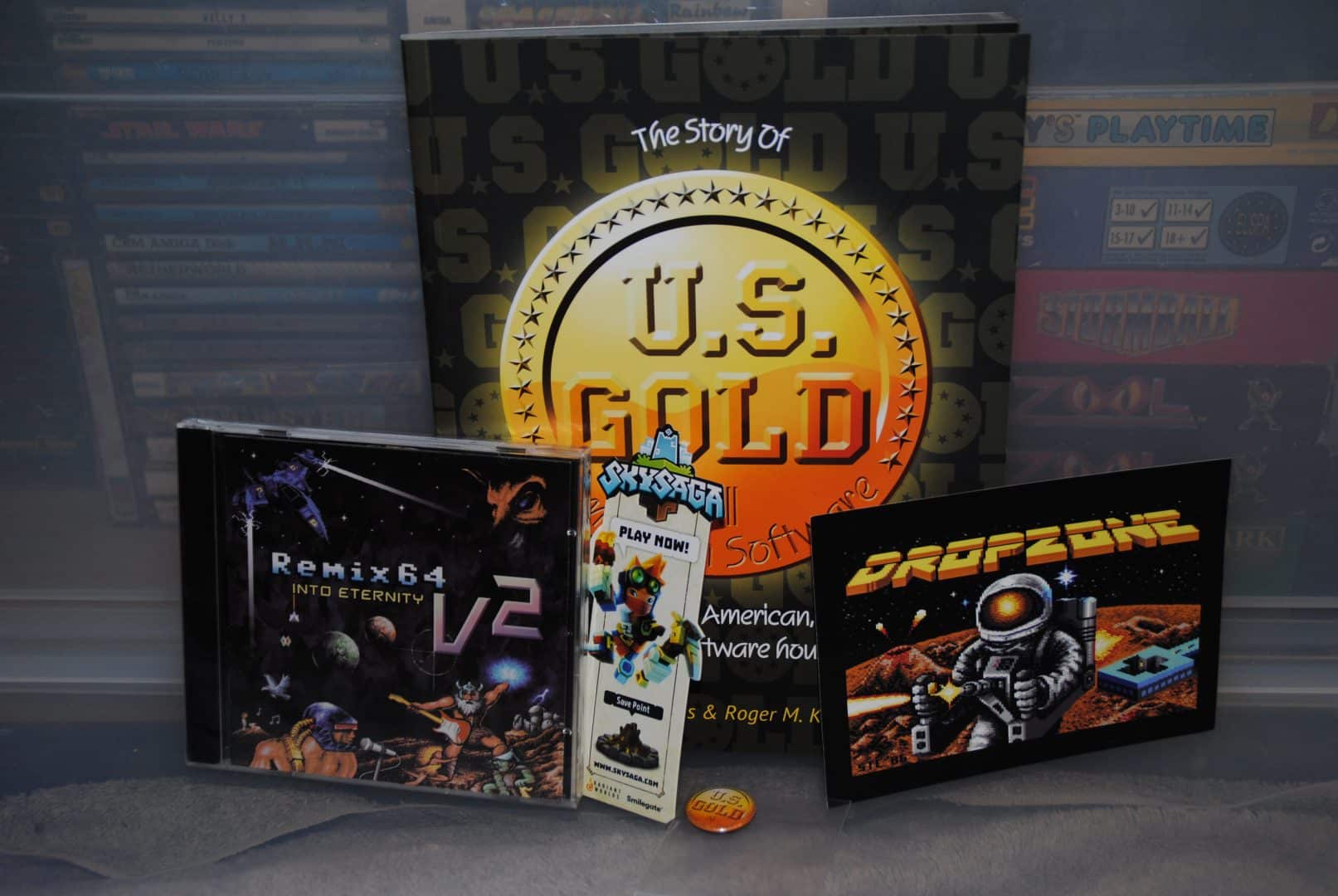 The complete package in one picture, not all that much to write home about but the book itself is more than enough and a very nice read, top quality print and while i did not go for the hardback edition i still think this version is fine too.

I recommend this game warmly to every gamer and retro junkies out there, you will not be disappointed. The other books have not been rated in my system as i implemented that after i wrote those articles.