Wailing Heights is first and foremost an old-school adventure point & click type of game with the simple premise of getting your old band THE DEADBEATS reunited and play that last gig.

As a bonus, you get not only a traditional adventure game but you also get a music-themed game with a lot of jokes and fun thrown in throughout the game, sounds like a winner right?

The first thing that hits you while playing the game is the artsy look of the game and yes some of it (not everything!) look rather good at times.

But as soon as you get the good stuff is when you get hit in the face with glitching voices and graphical glitches, the dialogue can be a nightmare to follow sometimes due to the background noise or music that is just too loud… more about that later on. 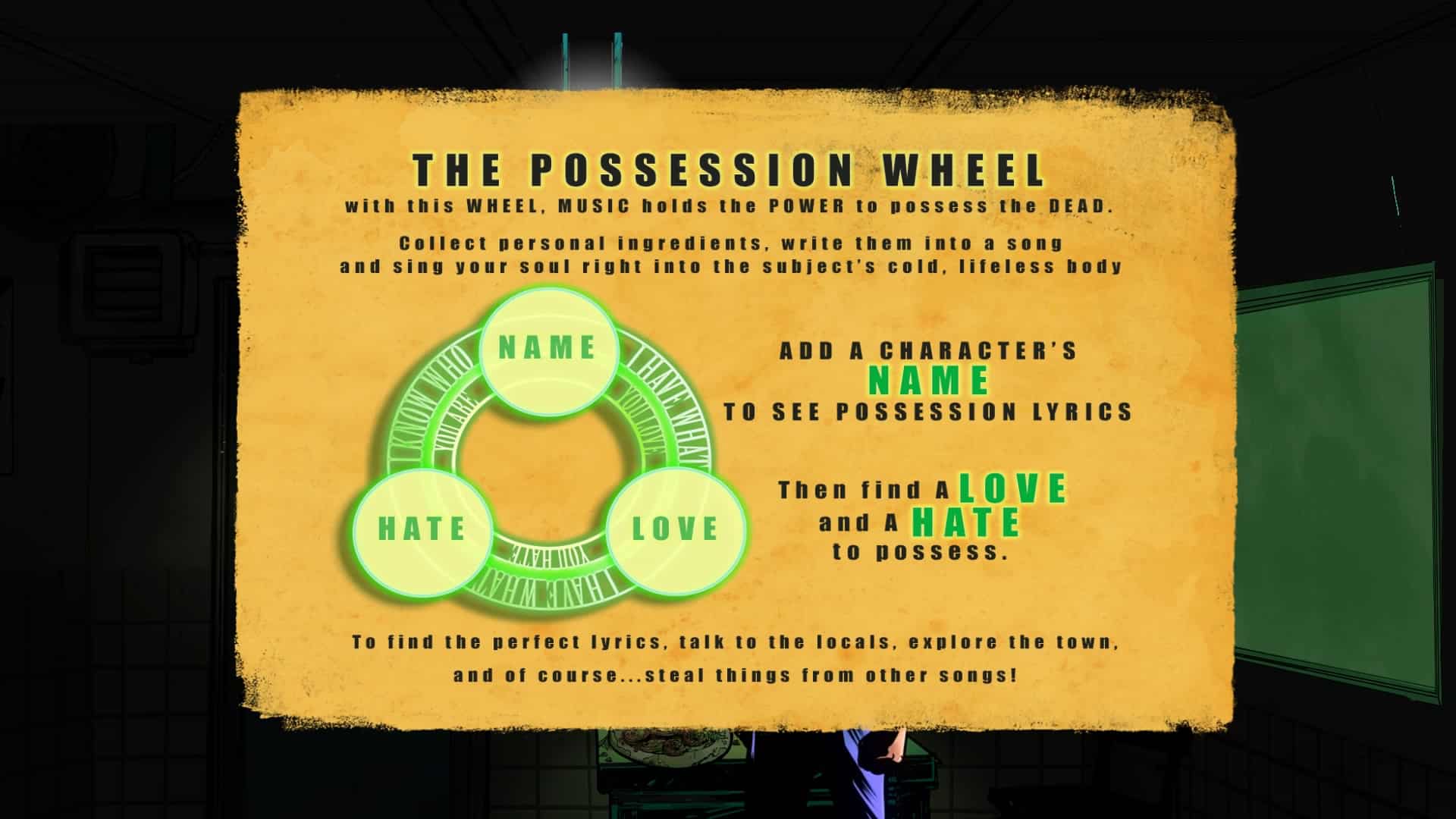 The Possession wheel is the first thing you learn in the game and it’s the sole point and mechanic of the game, meet someone and get their name and learn what they love and hate and then you can possess the character and use her or his skills to get further in the game.

Yes, it actually works rather good and while it is very slow and linear in the beginning, everything picks up the pace in the second act where you end up with a lot of names and things that people love and hate which will spruce things up a bit more and make it less straightforward.

You get a lot of comic strips and backstories throughout the game and the style in them are one of the main reasons that I wanted to complete the game.

The design and animation used in the strips work good, it adds a more professional feel to the game for sure.

The game haven’t got all that many locations and screens for an adventure game really but for some reason I never felt that it needed more of them, you got places like the Police Station, the streets, the Pub, the town hall, the coffee shop and the theatre concert location and most if not all of them had several sections inside each location.

The thing with the game is that there are so many characters to control (6+) that while few locations you still got lots to do as the characters got different skills that must be used to solve the various puzzles.

The small touches like when you enter the pub as a man then you hear only dog/wolf barking are just downright genius.

Is Wailing Heights a good game then? , well I have to start with a semi-yes/no here as there are so many technical issues spread throughout the game that just ruins the fun, there are locations in the game where I just wanted to press the mute button because of the background music and there are places I wondered which language they actually spoke in.

The ideas in the game are good and original and there was something with the game that made me play it further (beyond trophies and the art), the puzzles works and the small touches throughout the game certainly helped in making it a better game too.

A bugfix/patch will most likely resolve most if not all of the technical deduction part of my score and bring it up to a 6.

A very nice bonus is the trophy list in the game, all gold with a platinum on the top and yes you will have to think a bit to unlock them all too.

Into adventure games you say?  go for it, its only 8 Euro/Sterling Pounds.