The loot crates keep on coming and by the looks of things the quality is getting better too.

This months post is actually 3 weeks late because of me being too busy lately and maybe most of all i sort of forgot all about it. 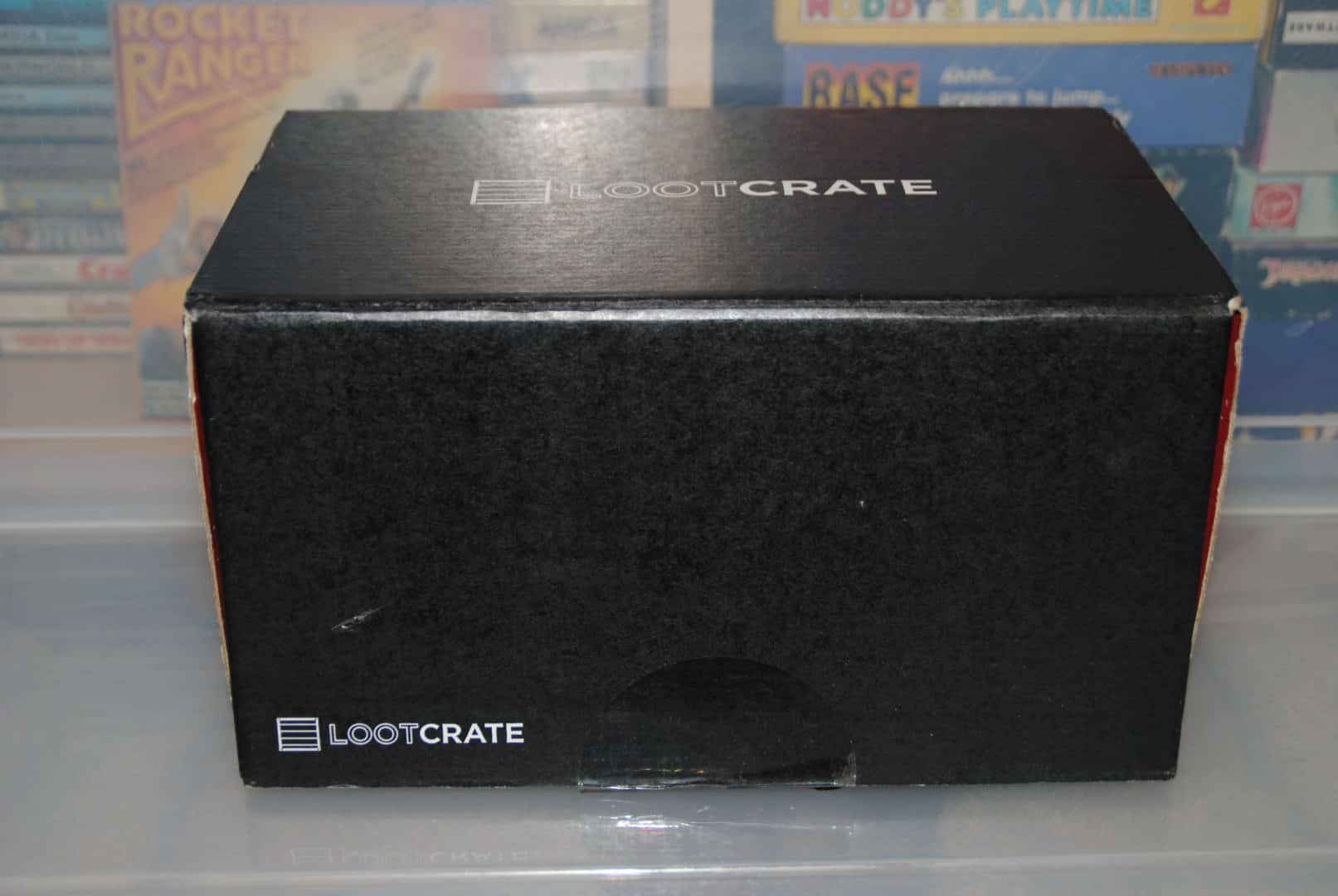 I have cheated this month because of me taking too long to do this post so i will try and do my best to sound excited and surprised, umm yes i will try.

February’s crate is the largest one i have got so far and the excitement was pretty high when i picked it up at the post office.

As always i never check out what the theme of the month is before i pop the crate open. 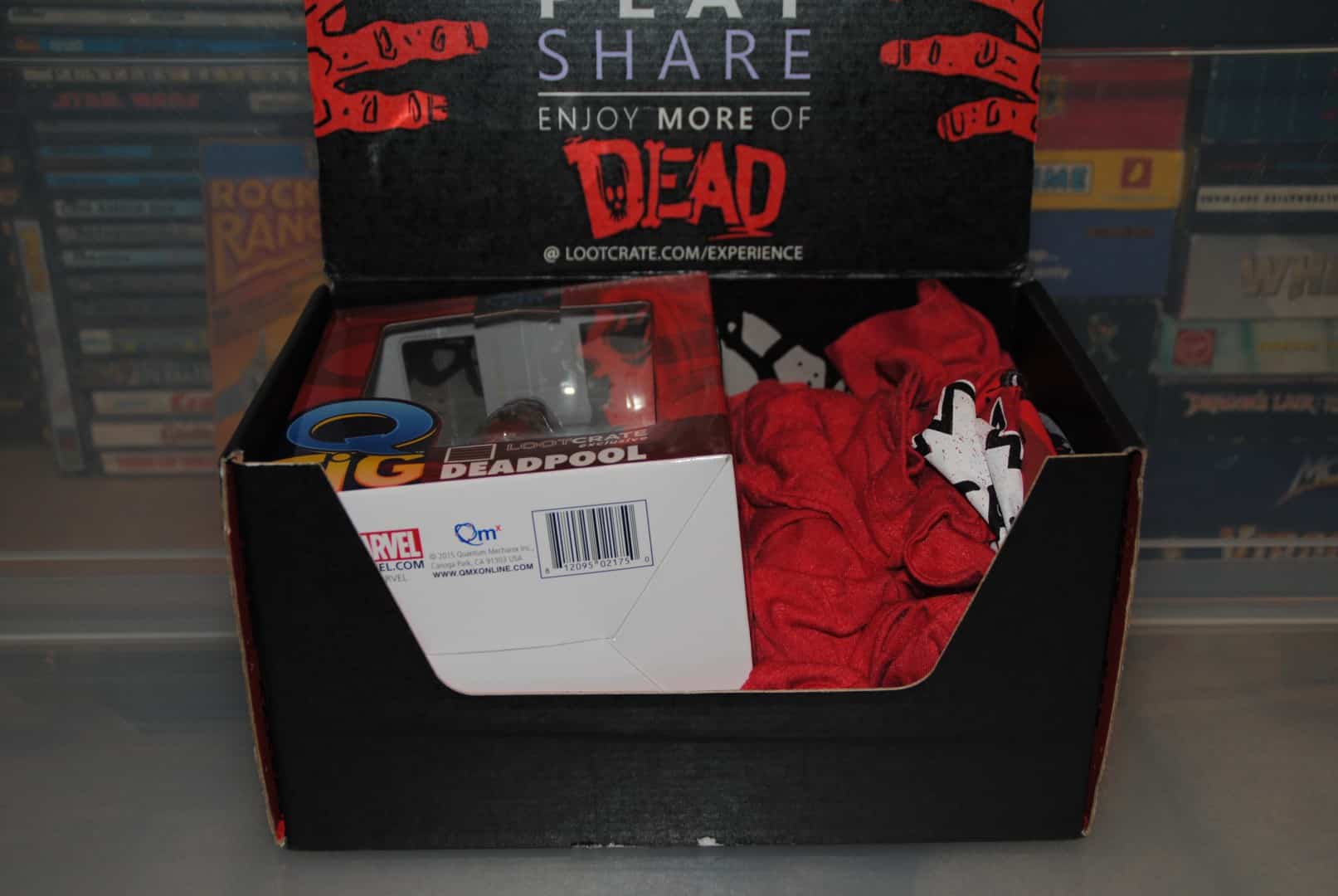 The theme of the month looks like it is DEAD and the box is packed. Full of goodies and a little glance at the stuff on top screamed “awesome”. 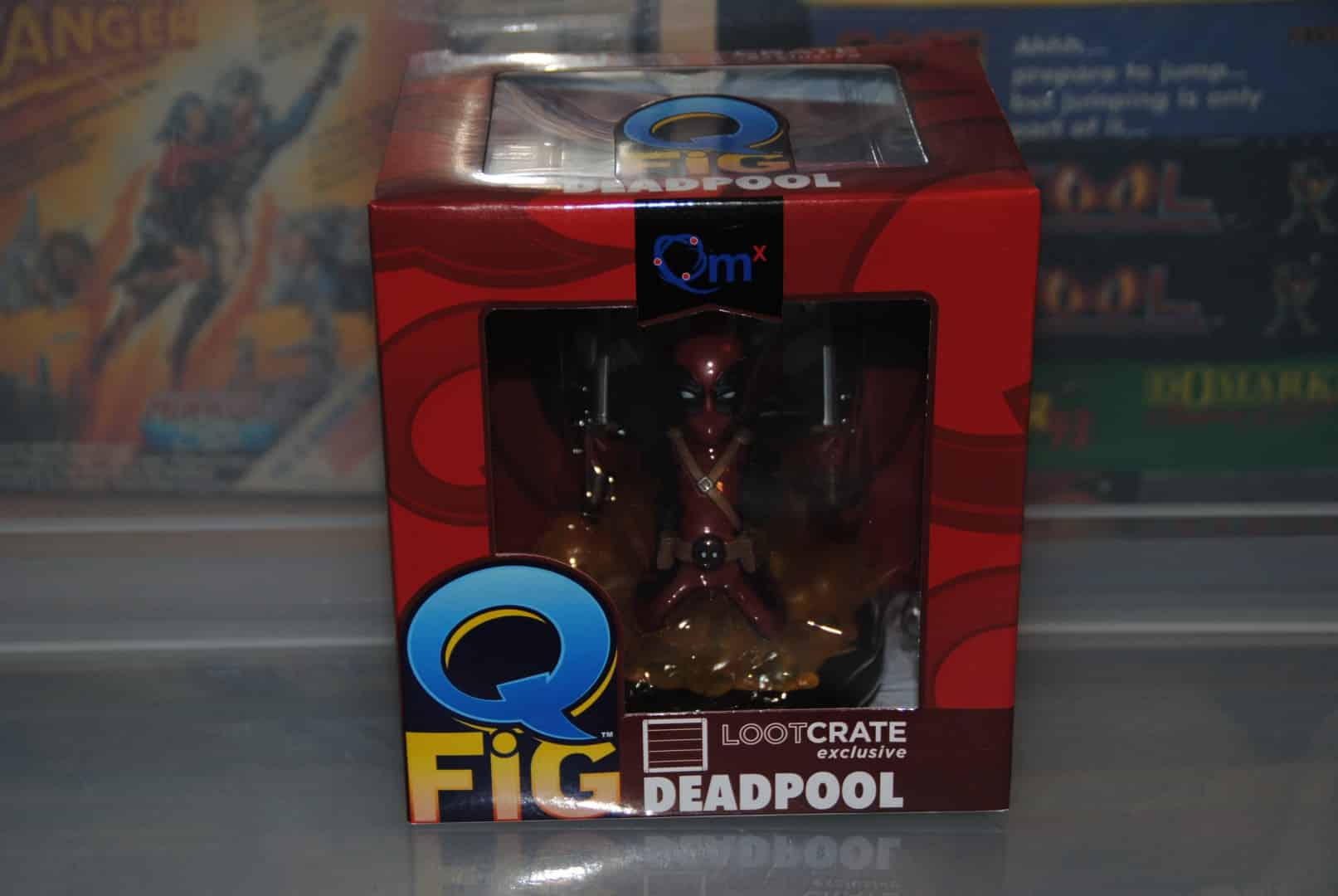 Oh yes!, a Deadpool figurine and a good one too. Deadpool was actually the first “comic”/Marvel movie i have seen at the cinema since the first Wolverine movie, the movie was top notch, to say the least, and it totally made me want more of him.

The Deadpool figurine is a Loot Crate Q Fig Exclusive and a good one. The colours and details are enough to make me happy. The size is somewhat tiny but then again that is the norm inside a Loot Crate.

This figurine already got a space on the shelf and it will stay there for quite some time for sure. 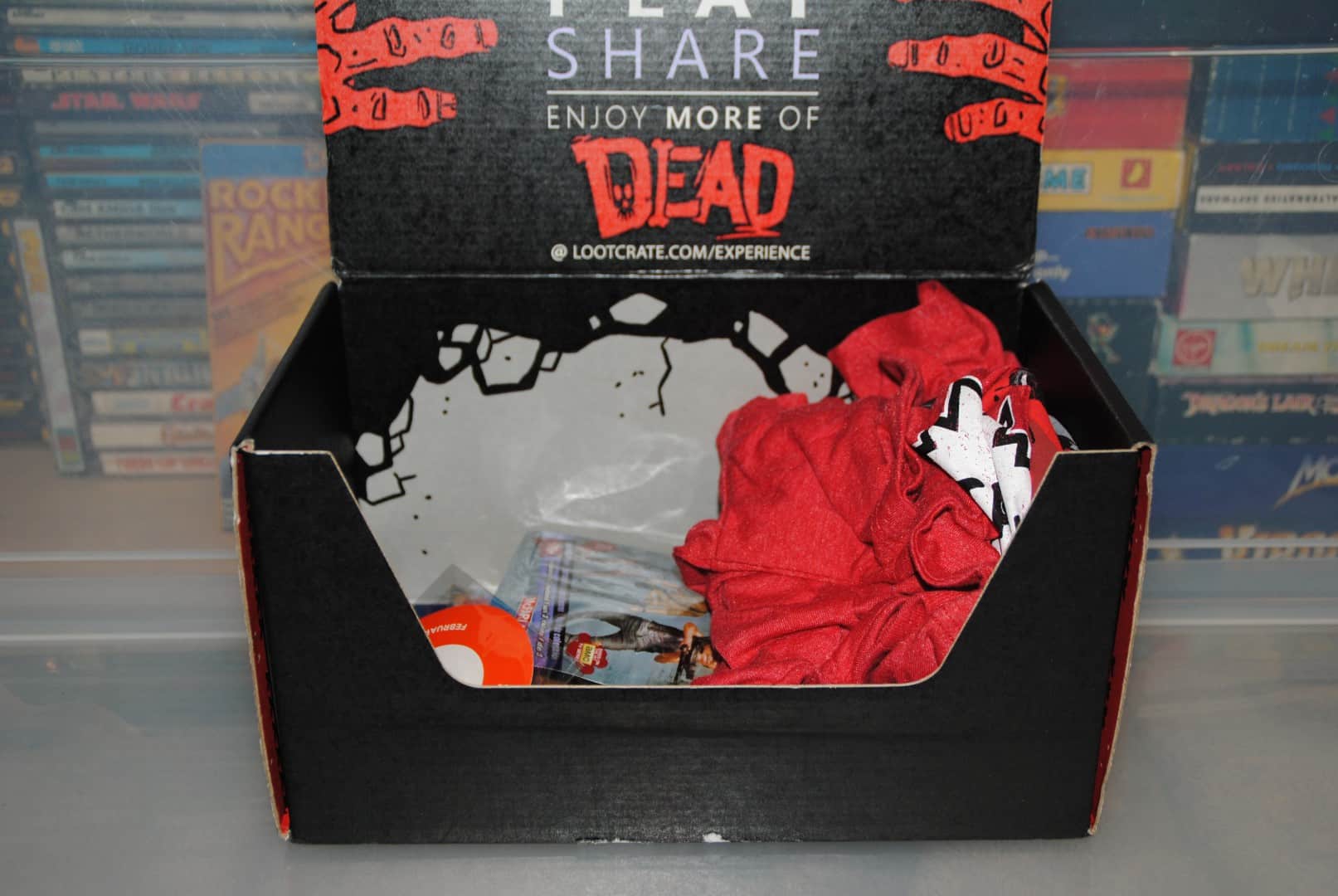 Next off is the T-Shirt, orange one and i expect it to be non-other than a Deadpool one. Time to see if my wish comes true.

Yup, it is indeed Deadpool and the motive is upside down and spells TACOS?! of course. It looks awesome and the quality of both print and material is as the other t-shirts i have got from these crates, great!. 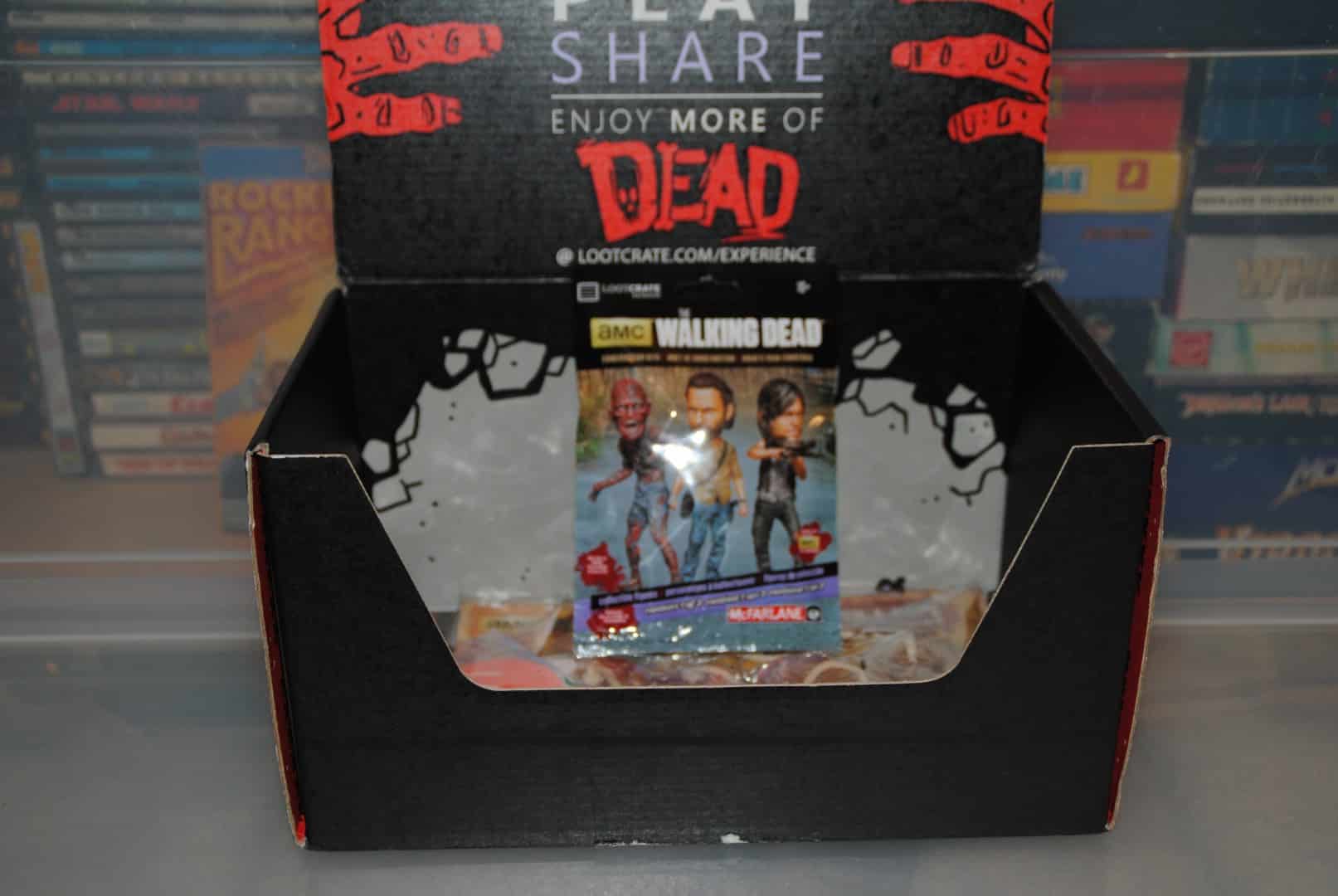 Next up is a WALKING DEAD figurine set, never seen such a set before and the first thing that popped up in my mind was eeewwww. 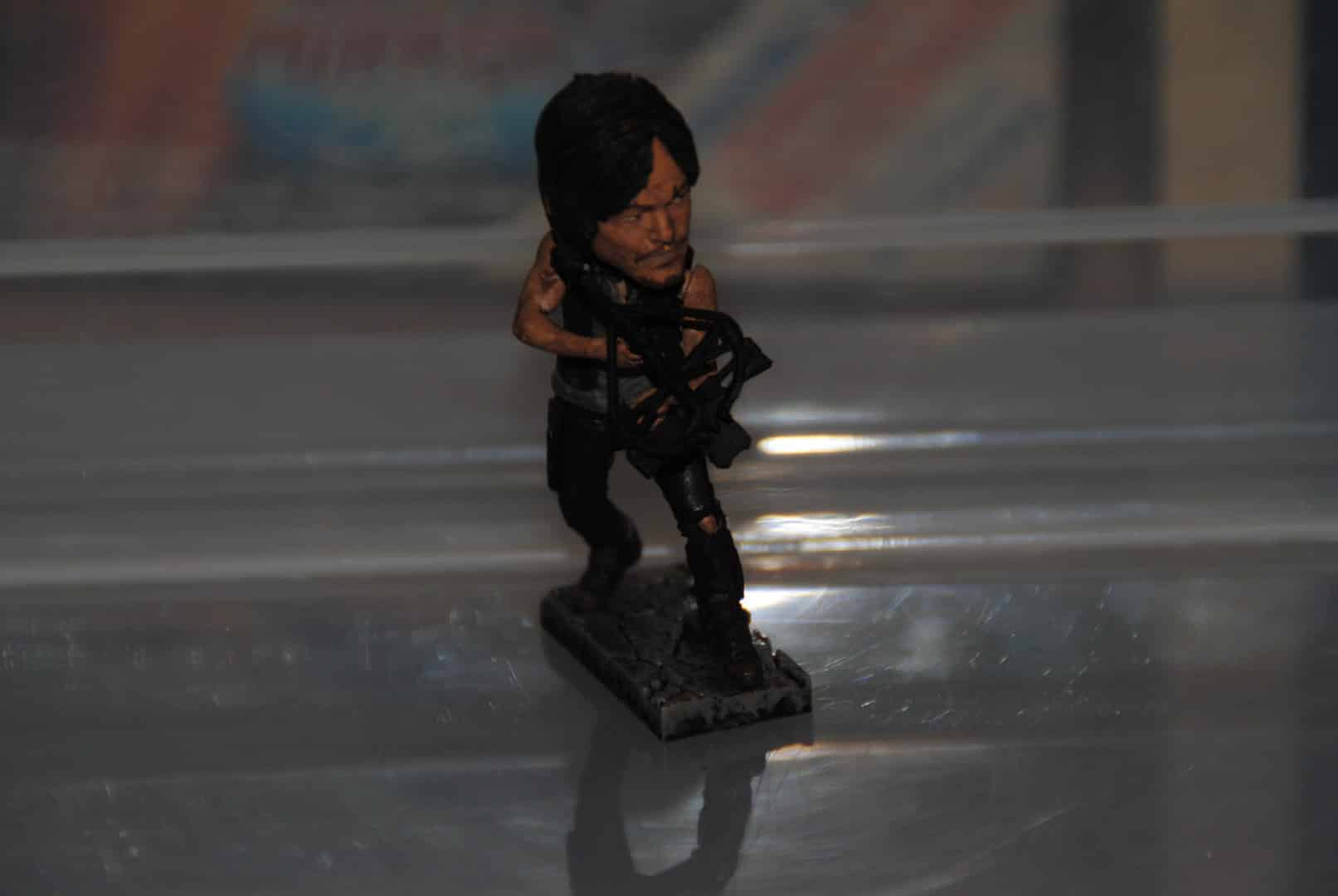 Ok, so after 10 minutes of irritation and fumbling the figurine thingy is now assembled. the quality is horrendous and the whole thing screams China and $1.

I tried to do some good pictures once assembled, that proved to be hard as the god Damned thing just kept falling over and once i managed to make it stand on its own the friggin weapon fell off. WHAT A PIECE OF JUNK!. 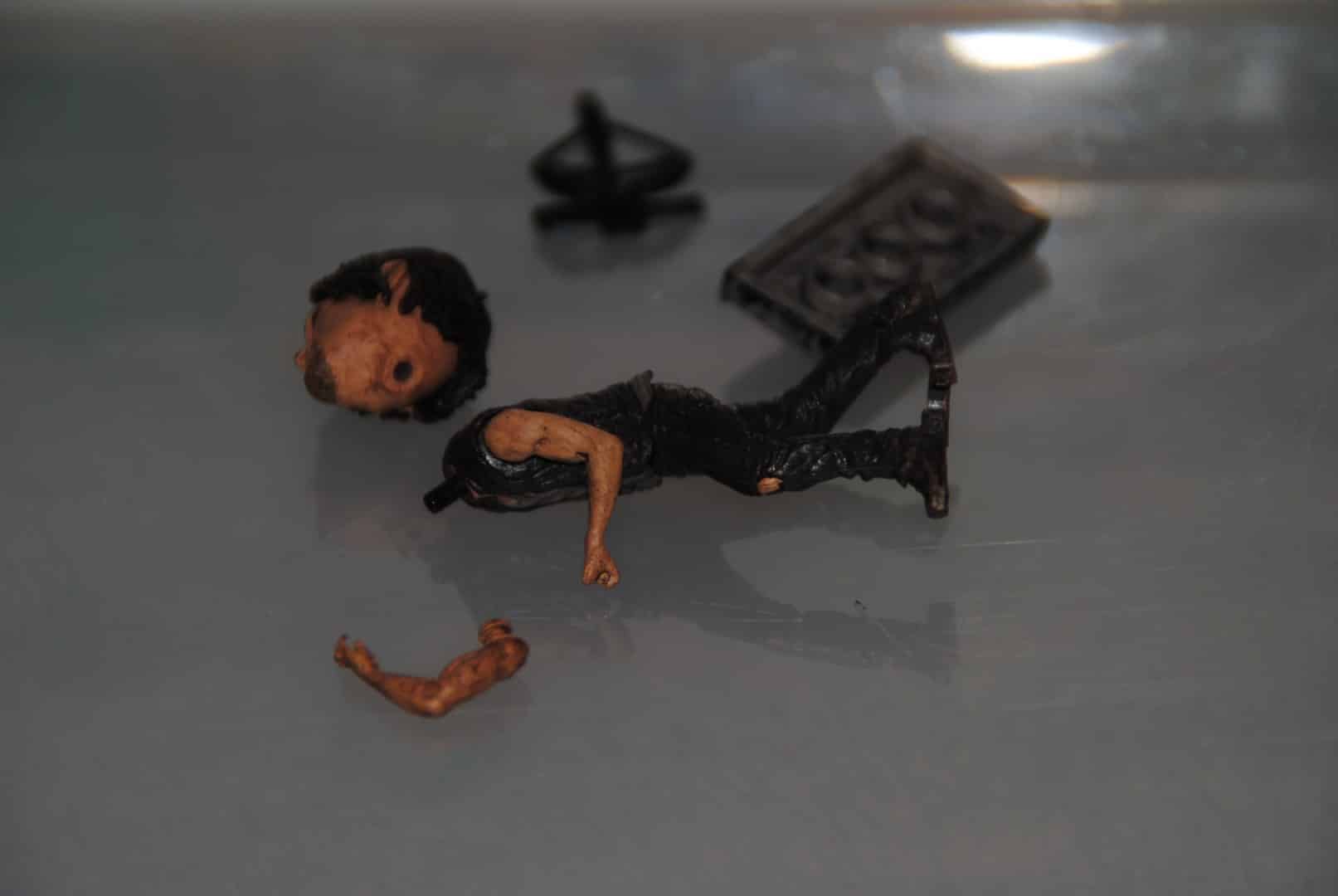 This picture is actually taken after it was assembled, this is the last i will ever see of this one hopefully. I decided to rip its head off, tear off his arm and destroy the LEGO type footplate in Deadpool style. THIS SHIT IS GOING IN THE TRASH. What a piece of useless junk. 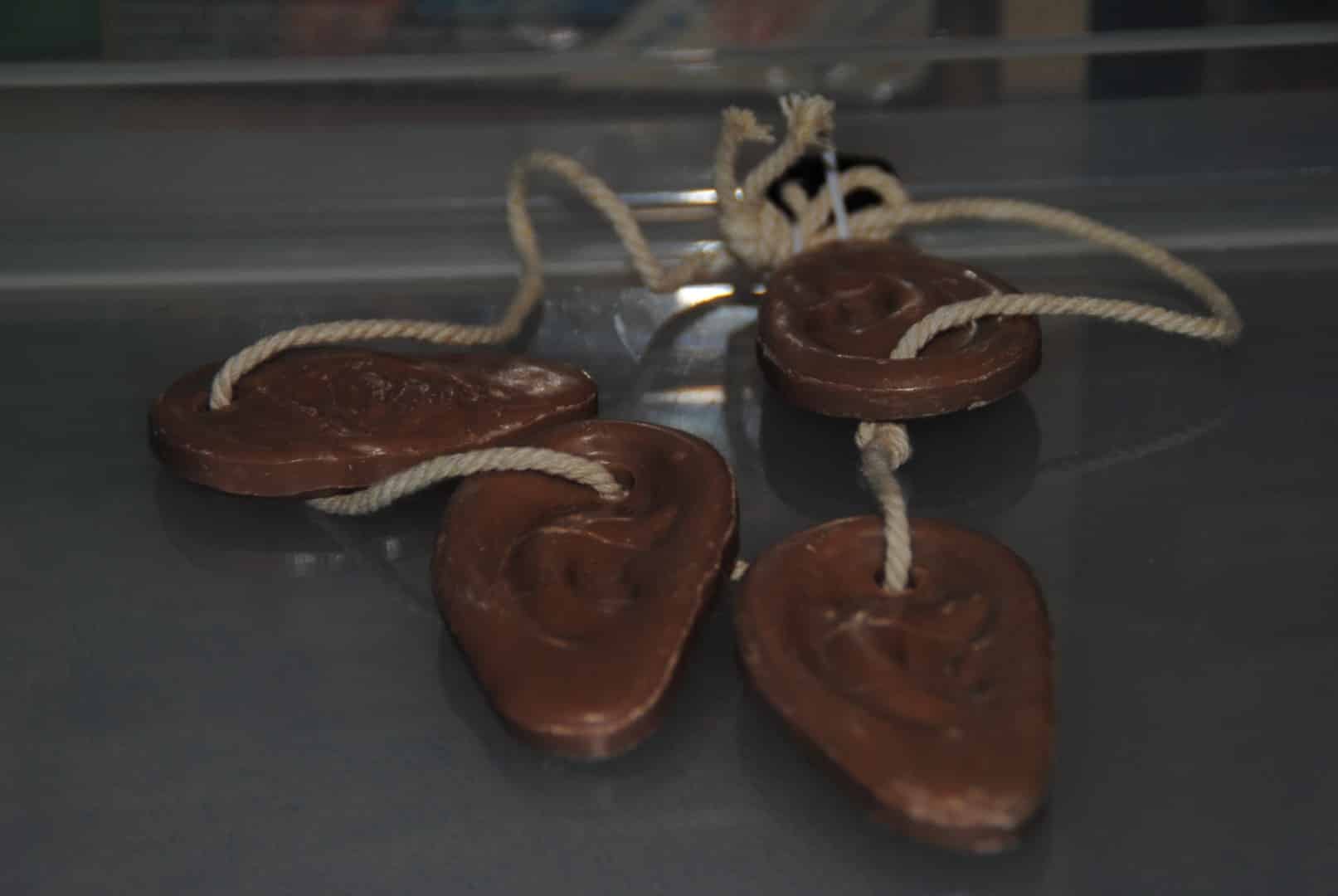 Ok?, more WALKING DEAD stuff?, this time around it is an necklace made of ears. Okaaaaaaay?, what the hell?.

This is actually a SOAP-ON-A-ROPE and the point of creating something like this is because of a certain character in the series whom carries this thing (not soap btw) around his neck. The soap naturally smells like crap, well not really crap. But you know, something you would never wash your body with unless you have only 1 day to live left and it is 110% certain that you will not meet a person.

Ok so, this Loot Crate started off great and now it doesn’t look too good really, lets hope there ain’t any more WALKING DEAD stuff in here…. 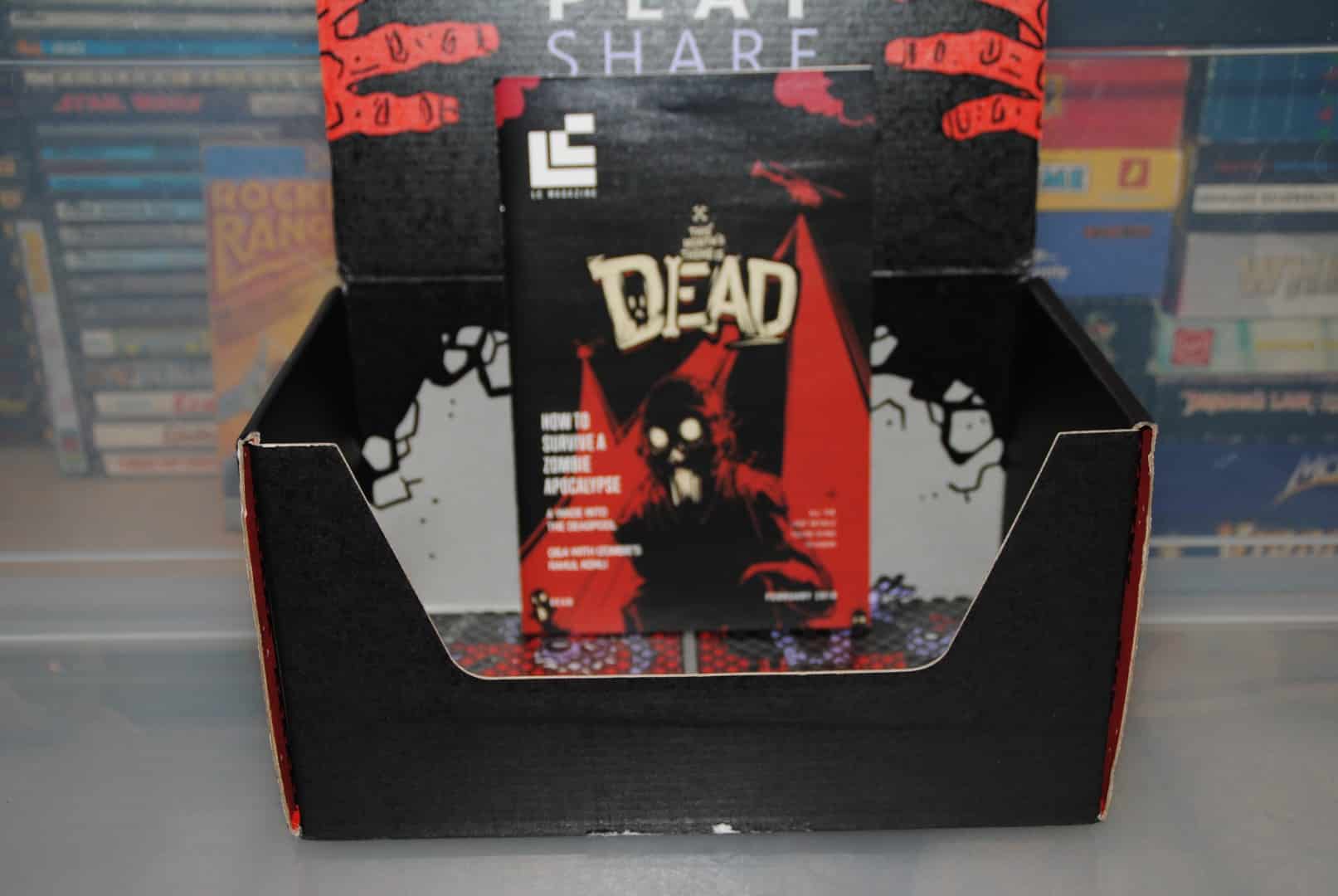 Next up is the leaflet thingy, really nice design as always and while useless as a collector it is still an ok read.

DEADPOOL and zombies is covered naturally, and the zombie stuff is actually better than the figurine and ear crap even though it is just a tiny interview thingy. 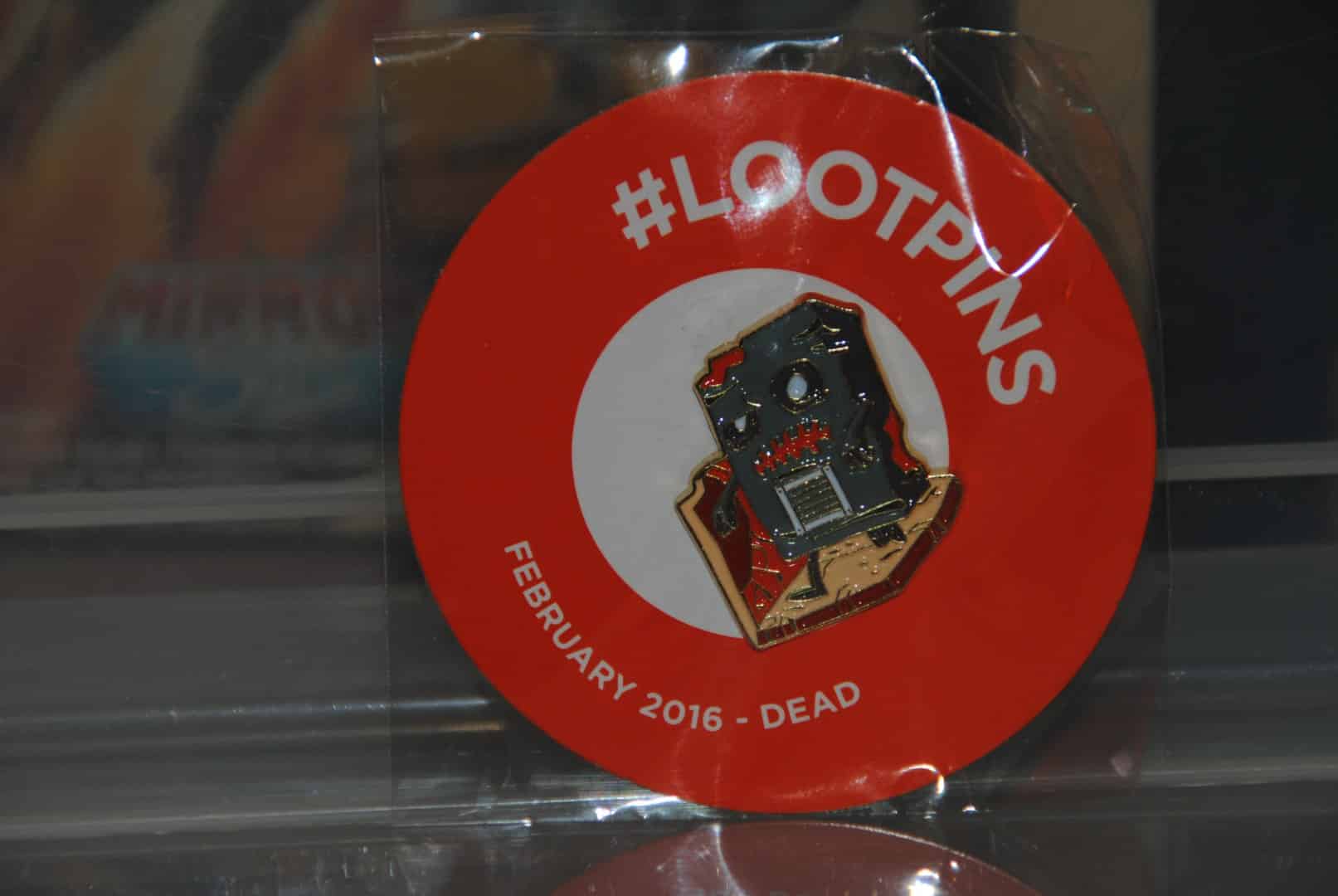 Last item in the crate, the pin and this time it is the new style and quality which was introduced last month. Collectible? , yes for some reason these things all of a sudden became intresting now that they’re more than just some button with a standard print on them, 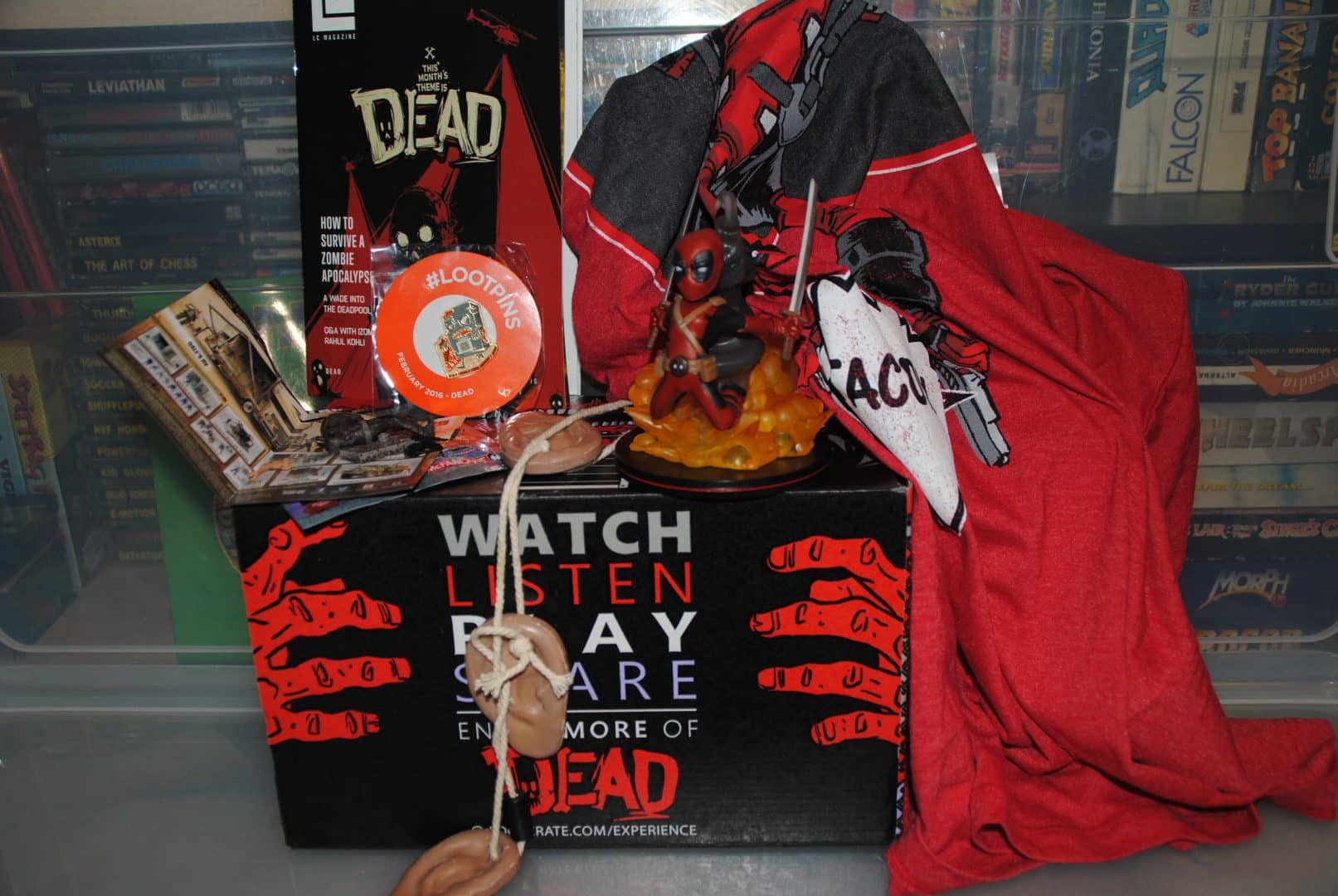 Ok, so that’s it, a crate that started off very good and ended up being mediocre. If it had not been for the DEADPOOL stuff then this crate would have been a really bad one. The WALKING DEAD stuff was pure shite and not worth being in a Loot Crate at all.

So the final verdict of this package has to end at a low 6 and one that i will not recomend to anyone out there, naturally the T-SHIRT and figurine will be enough for some people (like me).

Dear Loot Crate, i hope that next month will hold better stuff.