Another free LootCrate and hopefully a better one than the one last month.

It is time to pop the hood and have a look inside. 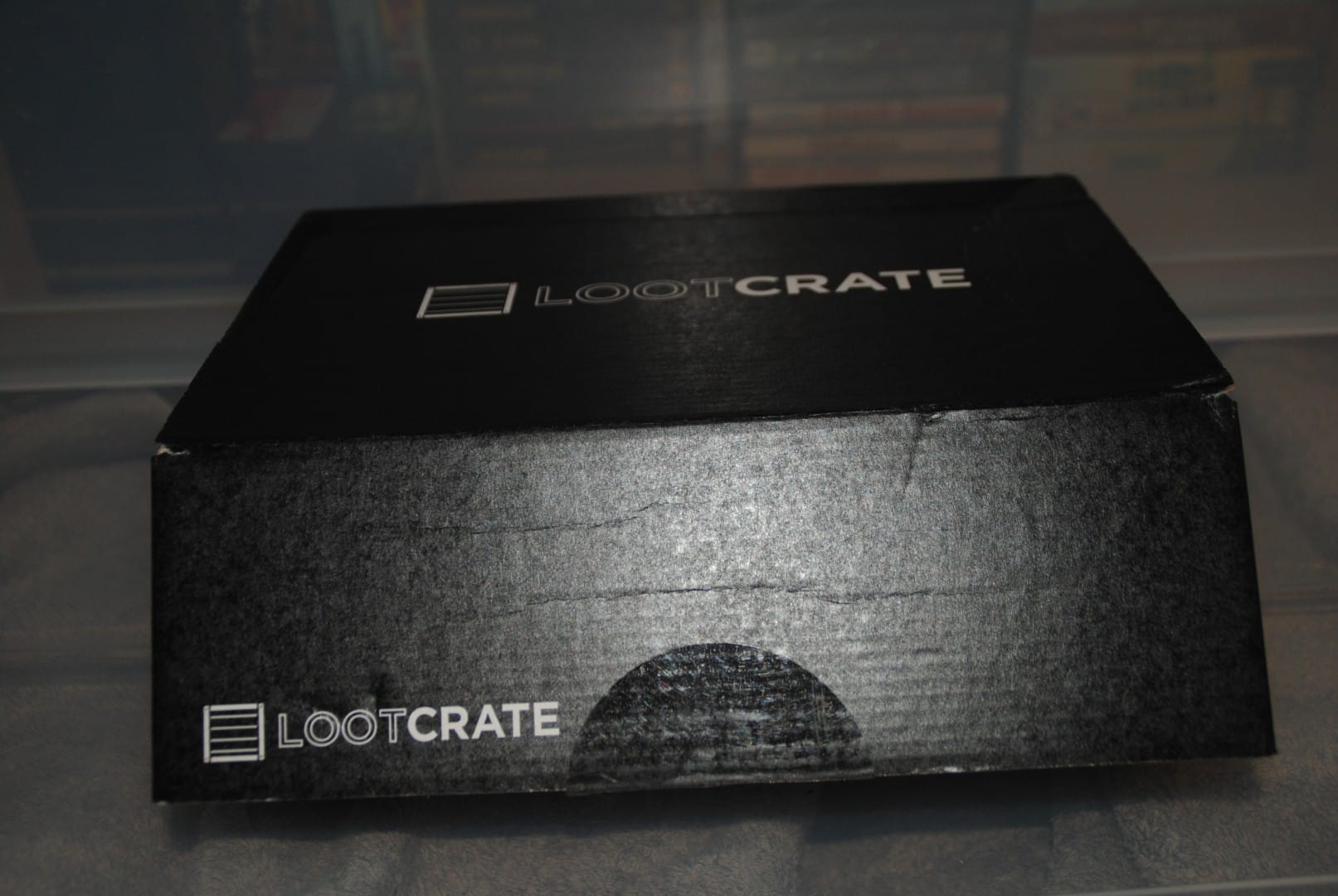 This month’s crate is another medium to a large box. The best thing about these boxes is that when they don’t fit in the post box, then it is a huge chance of it being a wicked in terms of goodies inside.

Oh well,  my expectations are very low due to how bad the February crate was. 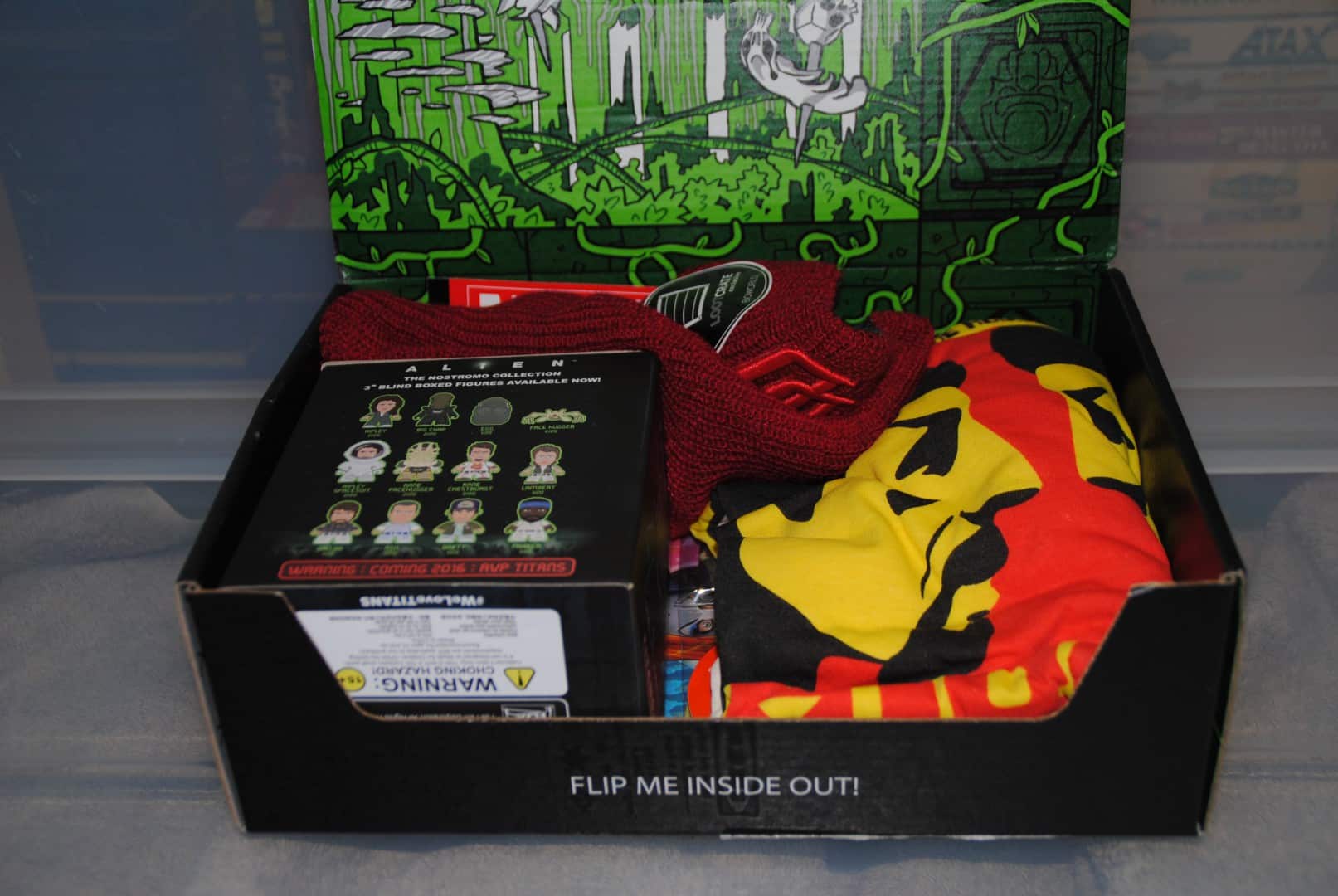 Ok, this looks better so far, i can spot a t-shirt and is that a hoodie?. I can also see a figurine of some sort.

This does indeed seem to be a better crate. 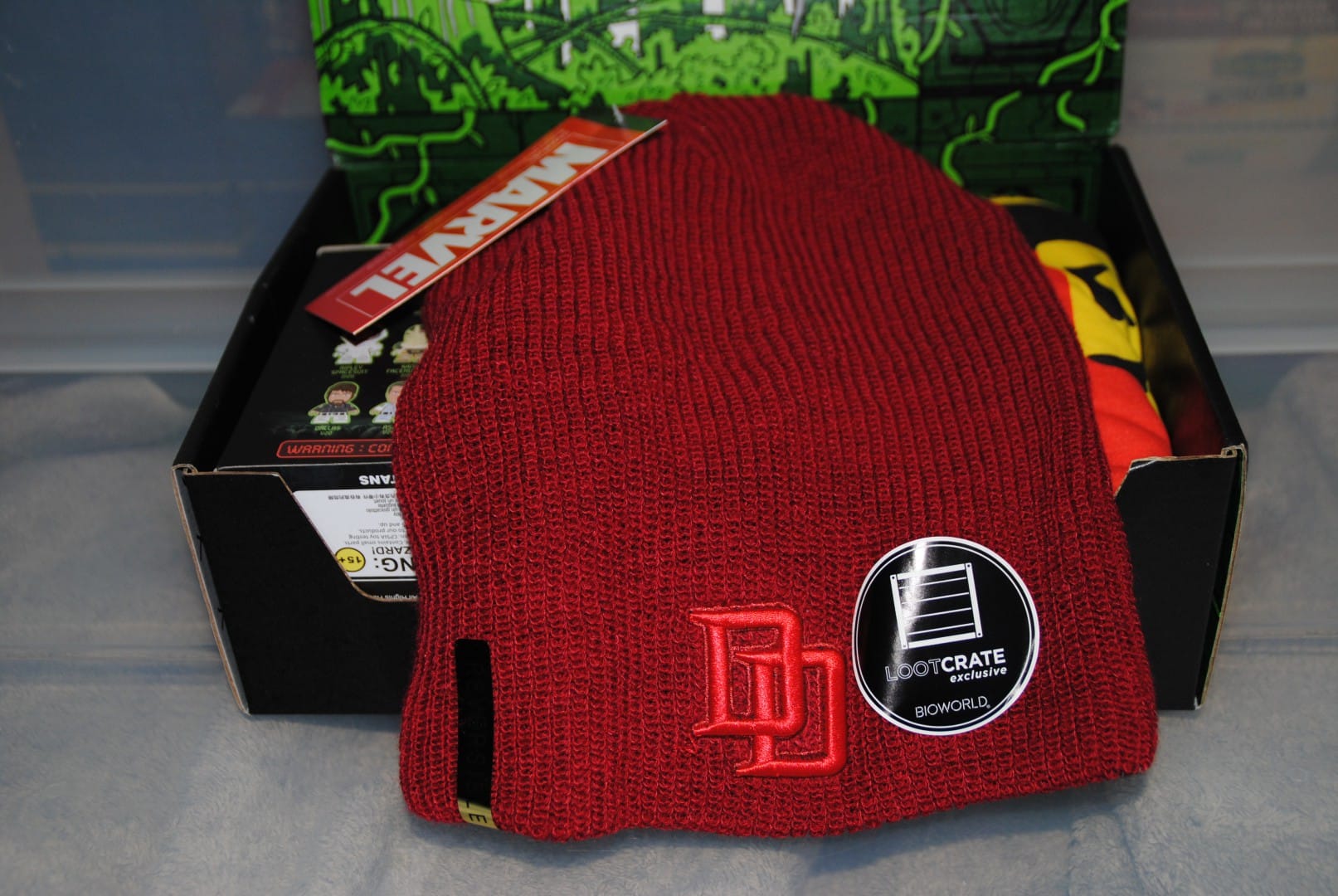 Oh, it is a DareDevil beanie. Official Marvel product and exclusive to LootCrate members.

The quality seems good, this beanie is one that many will most likely use, well except for me who hate having stuff on my head. 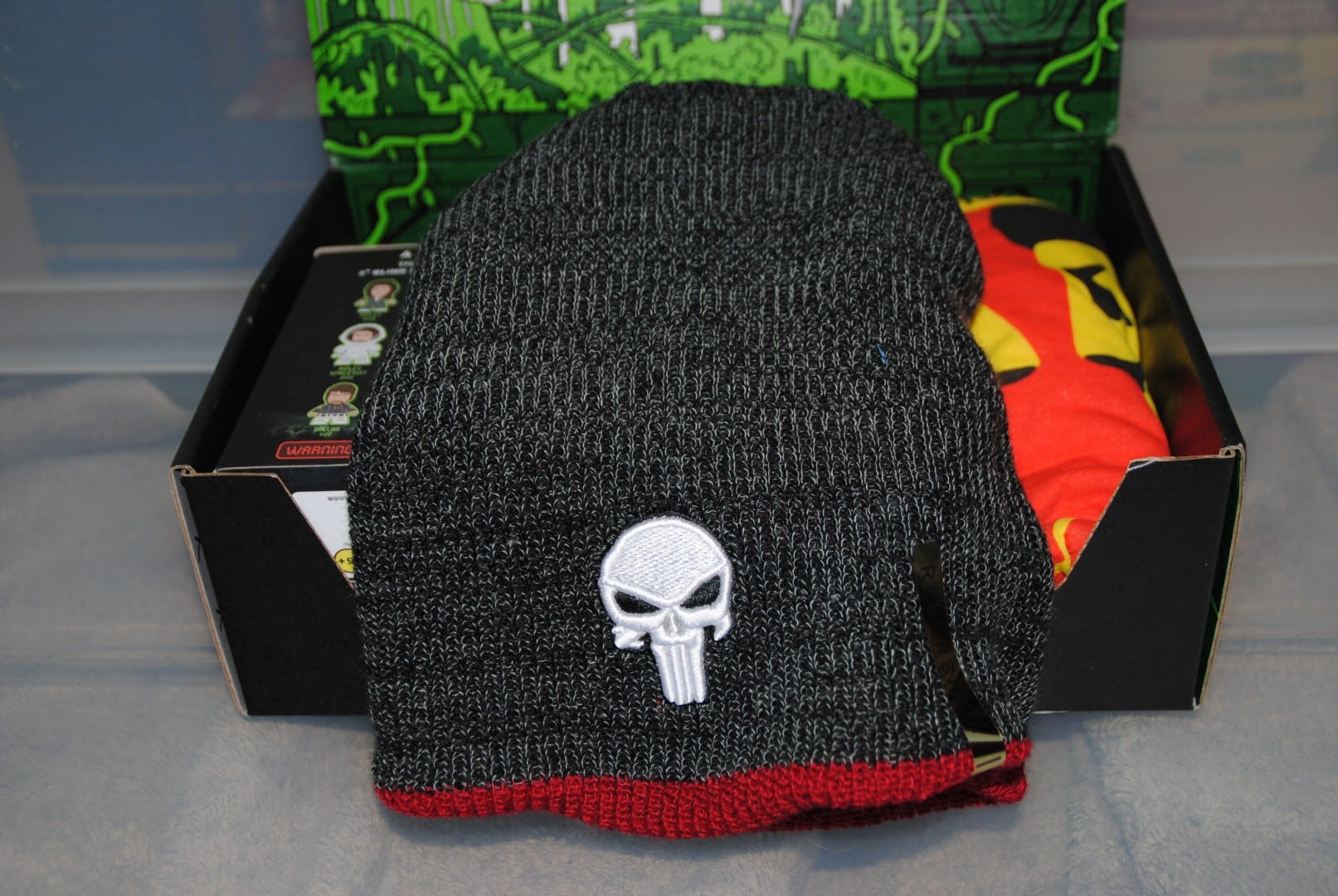 This is the same DD beanie as above, but it is a reversible one so if you get a Punisher beanie if you flip it inside out.

Really cool stuff, i will give mine away to a friend who loves this kind of things. 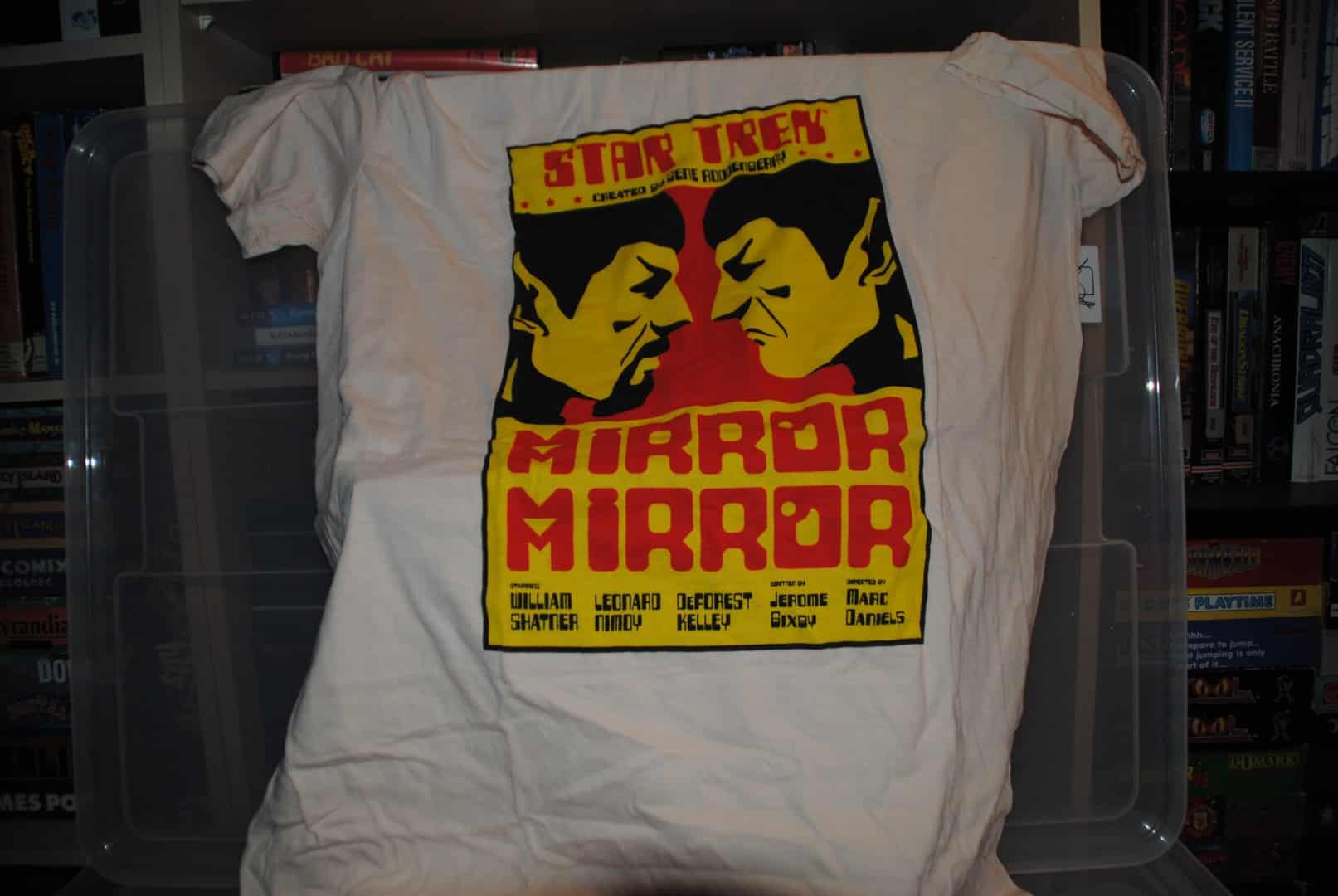 T-Shirt time, a Star Trek one to boot. Mirror Mirror it says and as an old Trekkie fan, i can safely say that even though the colours are a bit off i will still use this one, a lot.

The only bad thing here is that it is not entirely white, there is pink in it for some odd reason.

Next up, an AVP figurine. Exciting and while i have never been a super duper fan of neither Alien nor Predator i still play the games and watch the movie(s).

The figurine looks cool and something i want on my figurine shelf, but… 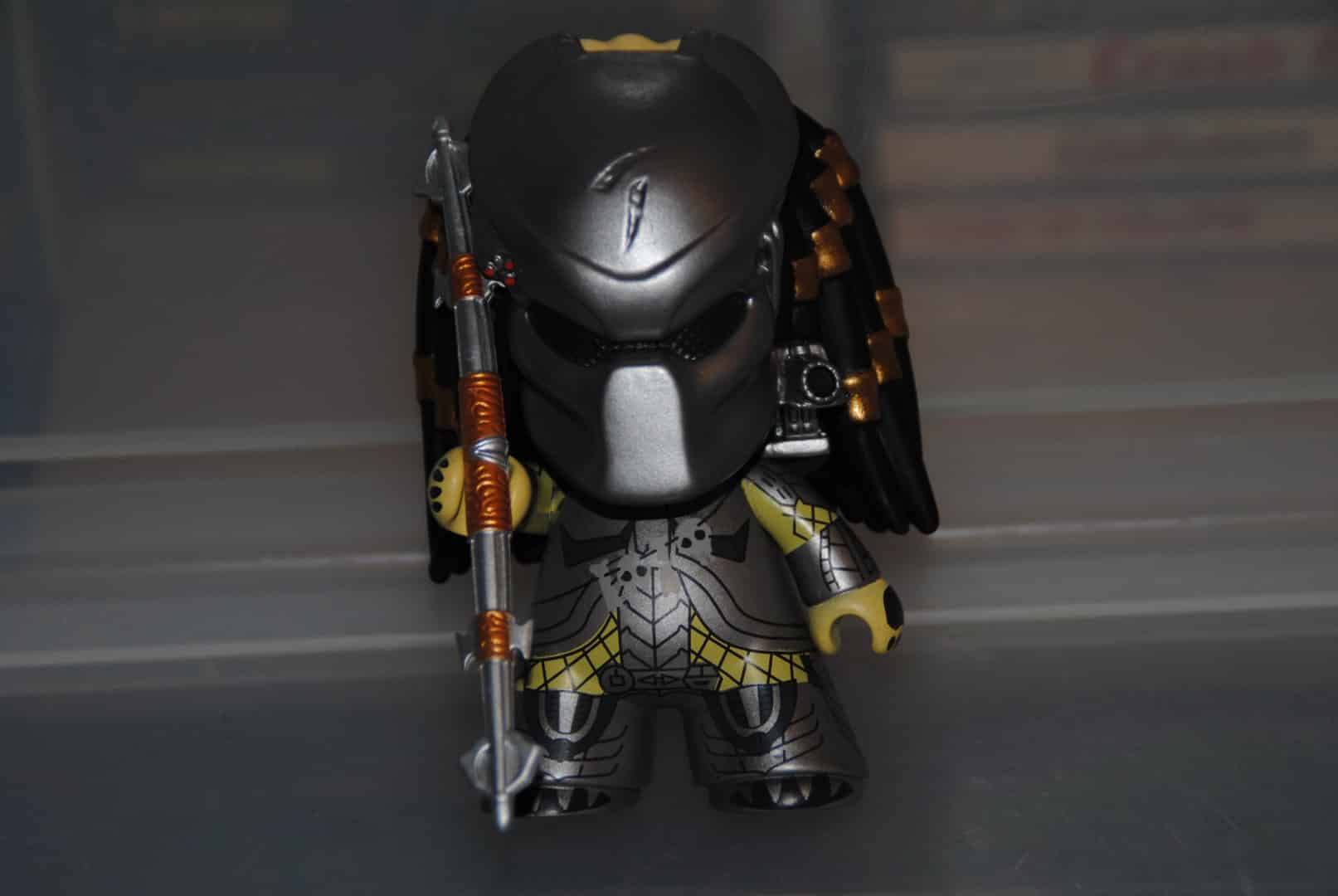 Yuck, it is of cheap plastic and it feels like a cheap knock-off thingy.

The figurine weighs nothing really, hollow too by the looks of it.

There are no details to write home about here, and right now i am unsure if i want this one on my shelf.

People who see it will say, cool, for sure but once they touch it they will most likely say the same as me.

Oh well, that was one shitty item in the Crate so far. 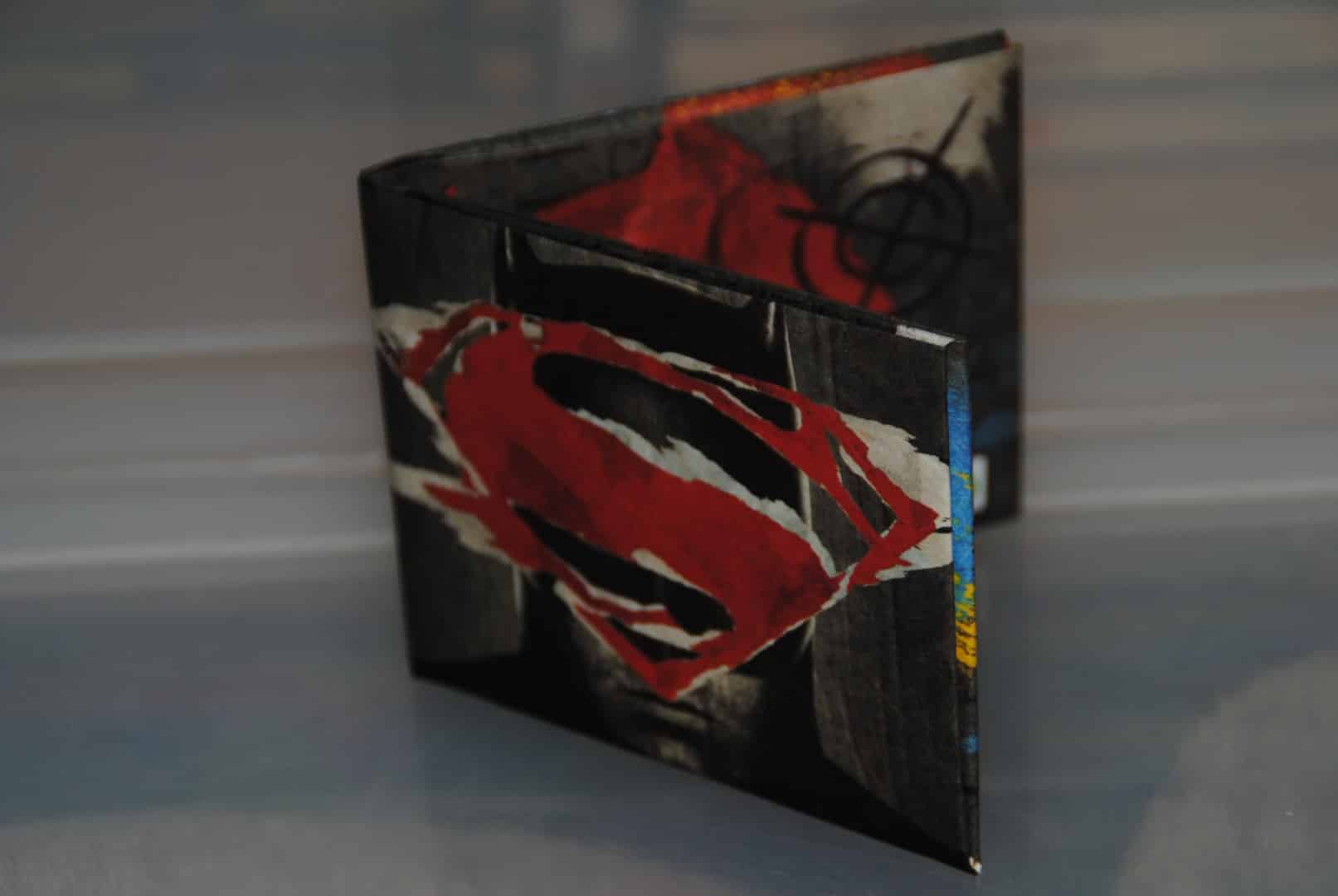 So, what the hell is this then?.

It looks like paper, it folds like paper and guesses what, it is a wallet out of paper.

What the hell?, a man of steel wallet, cool front and all, BUT OF PAPER?

Yes indeed, it is a Mighty Wallet from Dynomighty Design and yup it is of paper.

BUT WHAT DO I GET? A FRICKIN PAPER WALLET.

What do i have inside a PAPER WALLET then? , well the LootCrate guys and Dynomighty Design already figured that one out for me. 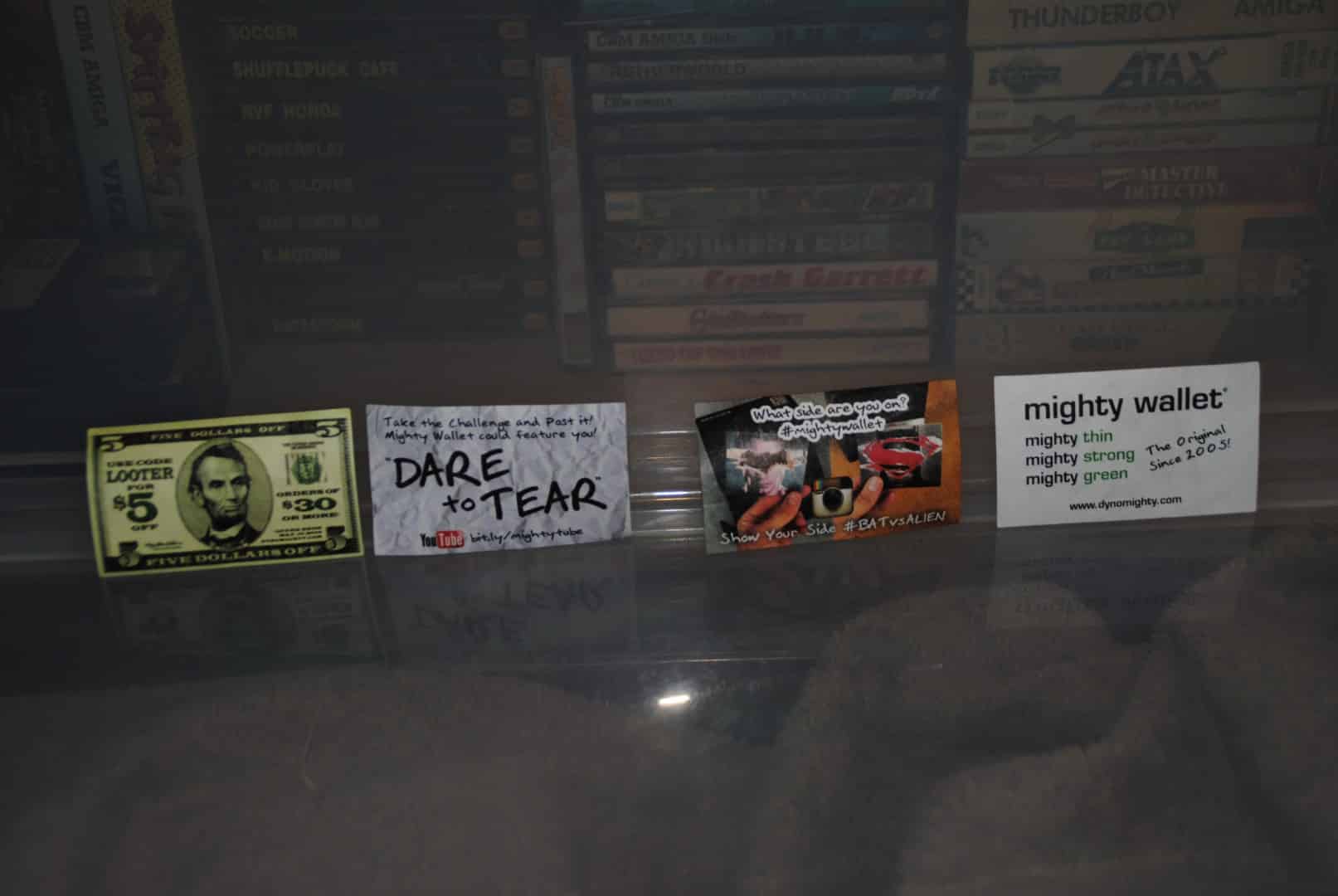 (I have to take a break! so i will do some pictures and some secretive stuff which will not involve paper).

PAPER MONEY OF COURSE!, i should have thought about that. Some coupon or whatever cards in here too, i threw the whole god damn thing in the trash a few minutes ago and i do not want to look in the trash for information about what they say.

Sorry, but if you want to know what the hell it then felt free to either visit me or rather my trashcan, or just contact the “%R#¢%#¢& PAPER company WHO DECIDED THIS WAS A BRILLIANT IDEA TO MAKE.

So what is next?, this PAPER folded wallet which might tolerate water (in my trash) better be the last crappy thing in this Loot Crate.

Ok, this is PAPER indeed but it is that type of paper that is supposed to be on a shelf or at the toilet or whatever, a comic!.

Its been a while now since the Street Fighter comic appeared (was it November?), that comic was brilliant and i can safely say that this Harley Quinn one is also brilliant. Great pictures and a good story, this is definitely a collectable for me. 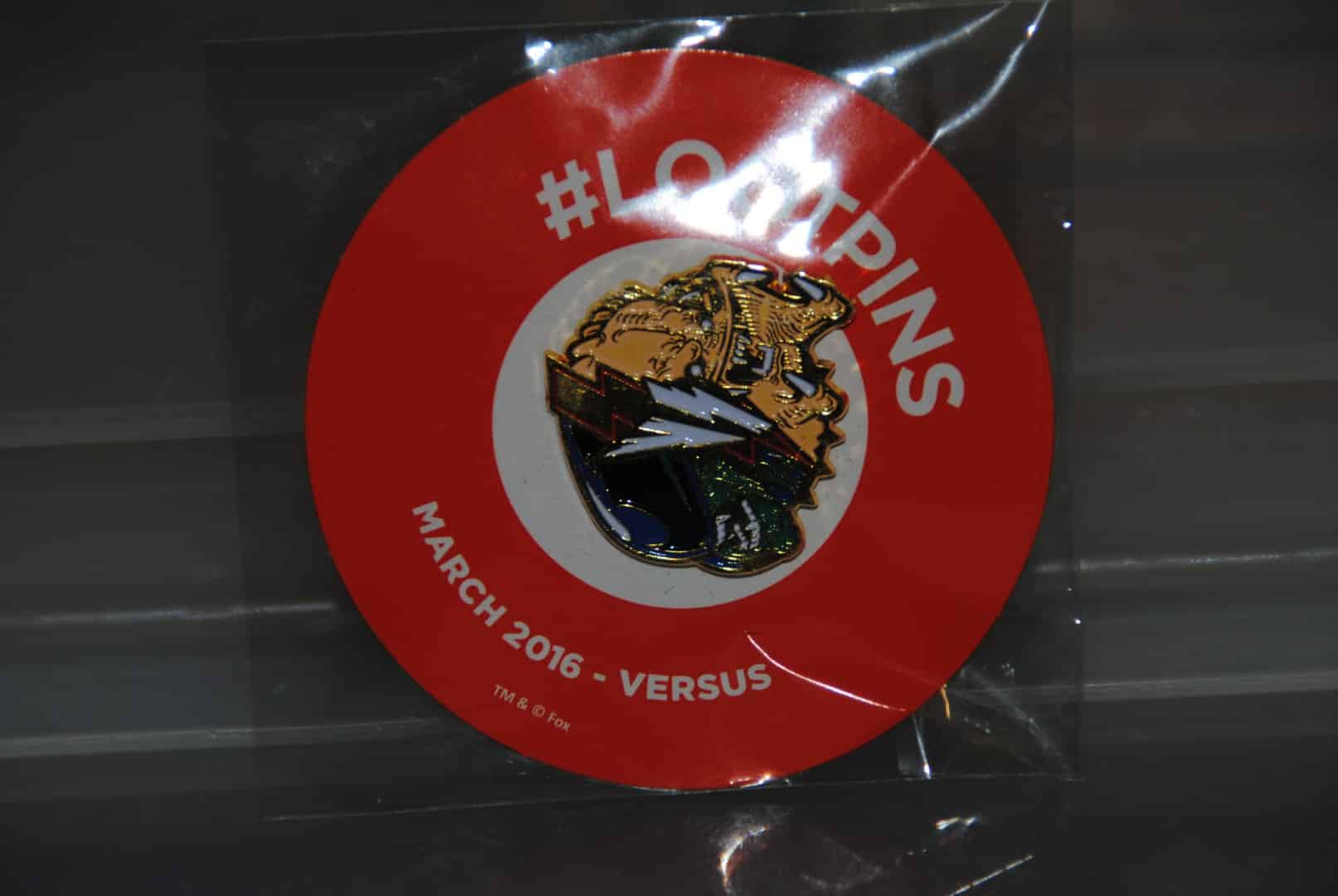 This months crate is called Versus / VS. and this months pin is again brilliant, the new design has boosted my interest in collecting these things.

I don’t expect these things to become of any value, but some stuff is just cool to have.

They better not turn these into plastic paper fridge magnets!. 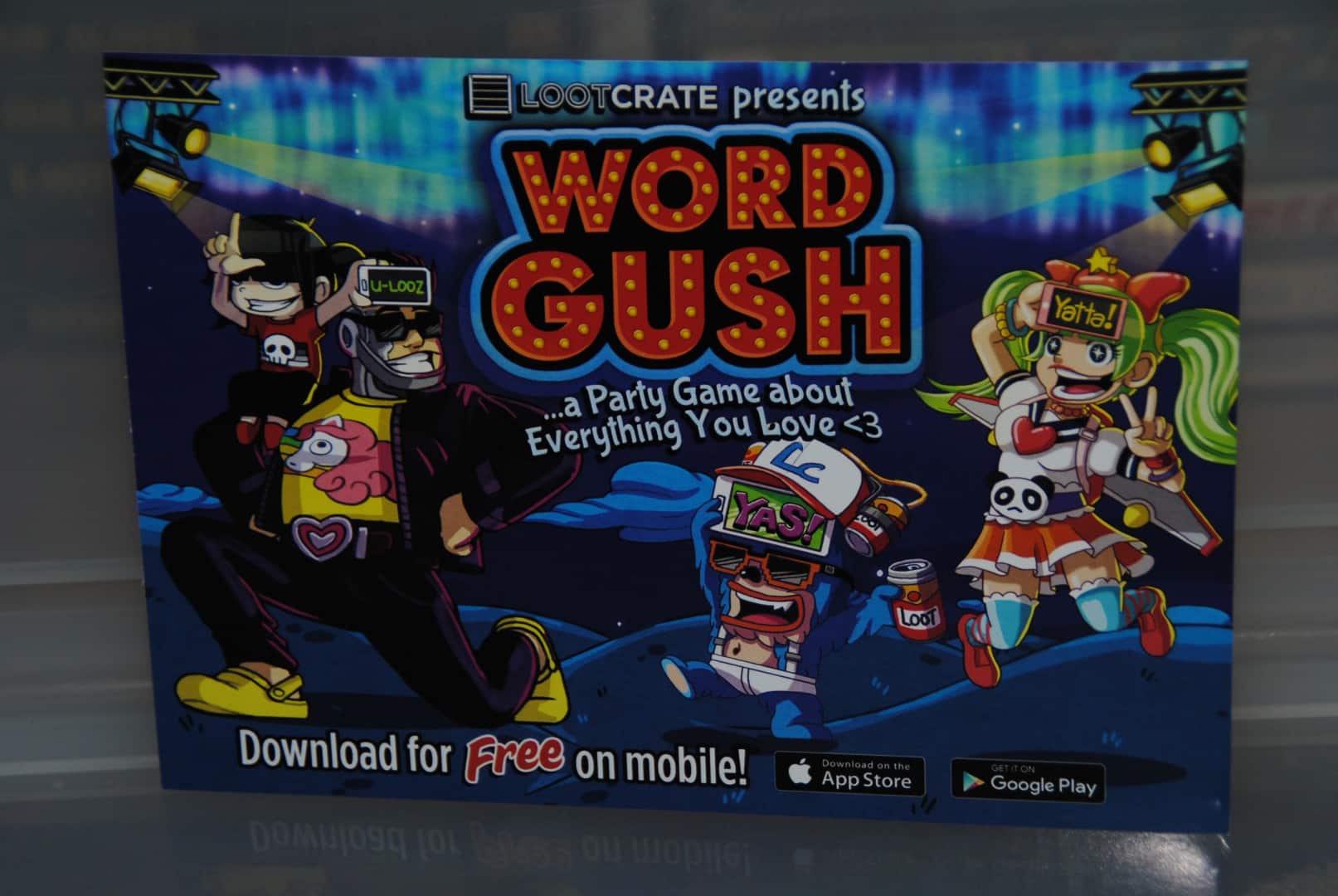 Ok, an Android/iOS game coupon is included for a game called WORD GUSH, but since i do not care about games on these touch screen things, well it is useless for me.

This might be an awesome game and one that Loot Craters many out there will love so i won’t bitch about this one too much.

Another nice advertisement leaflet is included, the standard stuff but for some reason, these items are something i enjoy reading. 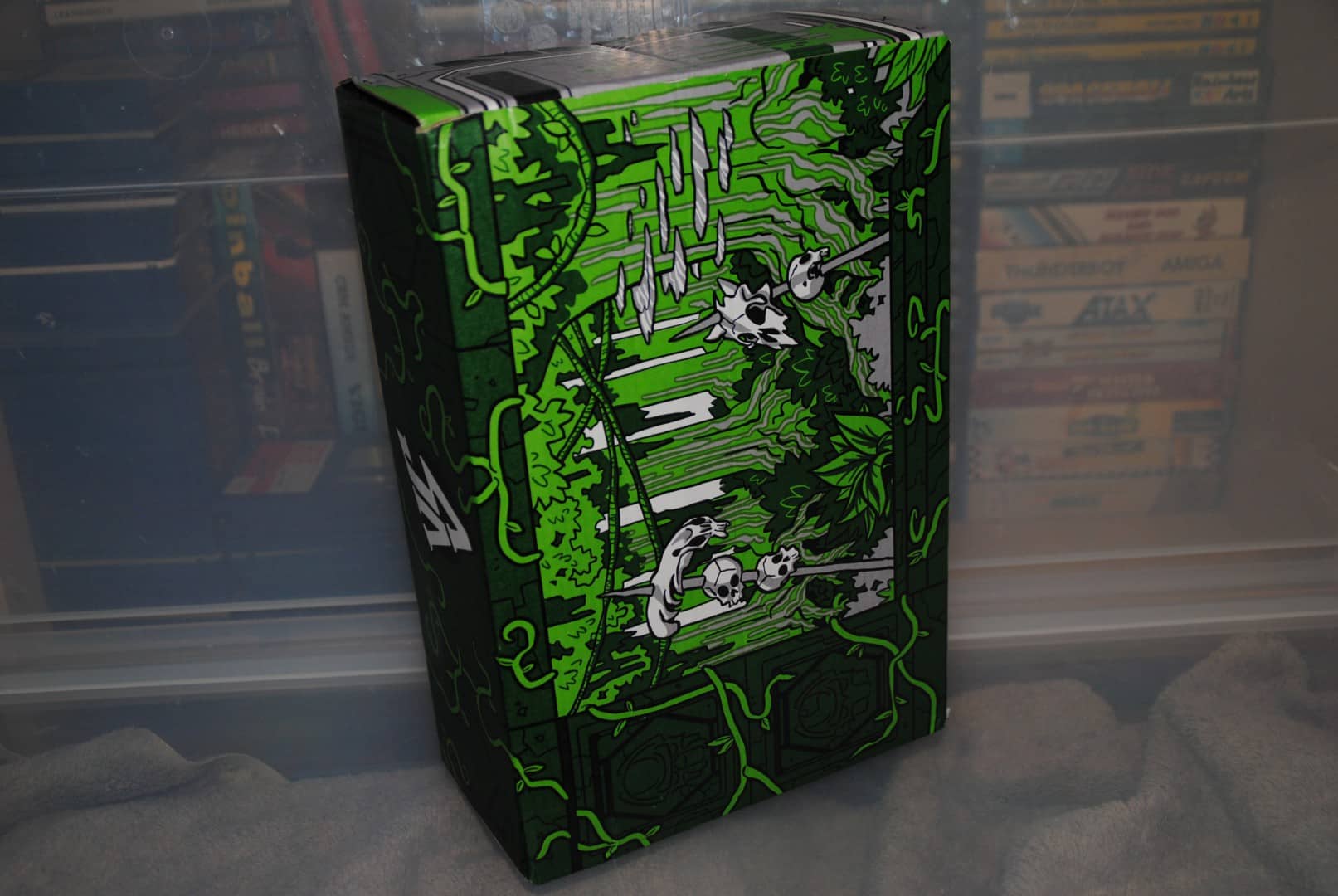 The Loot Crate this month looks pretty decent albeit i have kinda lost interest in these lately due to space consuming and not being the same size/*width every month. 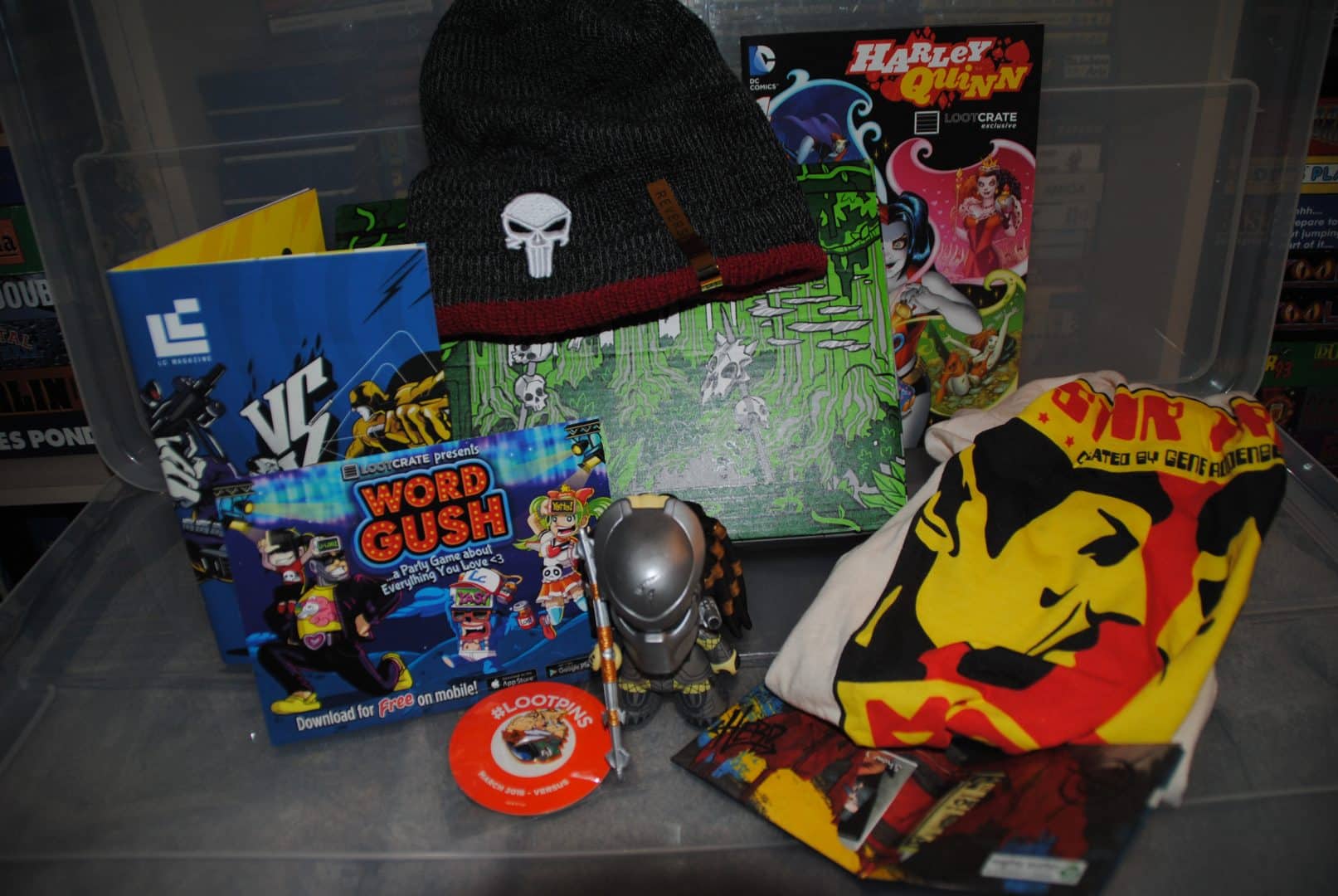 This months crate is better than last months one, but the wallet and the AVP figurine drag down the score, also there are fewer items this month than the regular amount lately.

While my rant might have been amusing and over the top at times, i still have to say that some items in these Crates are just filler and of no interest to most people out there, sad but true.

So, some items had to go straight to the trash this month too, one i will give away to a friend (who will be very happy) and a few things i will keep, i shouldn’t complain really because all of this is free.

For the subscribers out there these crates cost money and the more filler in the boxes the more people will unsubscribe for sure, The review here is my opinion of course and if you disagree then it is your choice, feel free to let me know what “YOU” think of it.